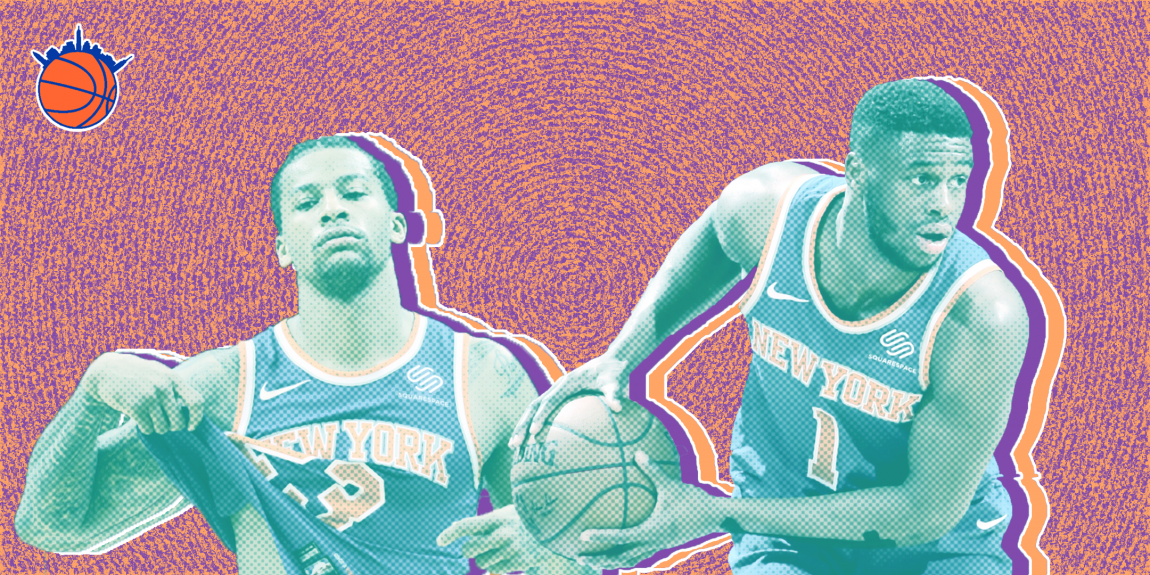 The second half of the season in New York was highlighted by guard play. What will come of two young players seemingly headed in opposite directions?

Do you know what the world’s greatest lie is? That at a certain point in our lives, we lose control of what’s happening to us, and our lives become controlled by fate. Those are the wise words of Paulo Coelho, and can be proven true through all walks of life.

Take Trey Burke for example. When he initially inked a deal with the Knicks back in October, he was a forgotten man. He had flunked out of Utah after the Jazz selected him ninth overall in 2013. The Jazz then flipped him to Washington where he found a role backing up John Wall for some time. That too came to an end when Brandon Jennings was signed by the team and Burke was, once again, a man without a home.

Ordinarily, the path that Burke was on ends with overseas action. Instead, he put in the work in Westchester and earned his second chance. The Knicks granted him that new lease on life, in which he repaid them in full and then some. He wrapped up the season as the starting point guard sharing a backcourt with Frank Ntilikina and has proved himself worthy of keeping around.

Then there is Emmanuel Mudiay. He’s a bit younger than Burke, but is going through a similar experience. Denver selected Mudiay with the seventh pick in 2015 with the expectation he’d be a dynamic point guard that they could build around. The universe had other plans. Mudiay never really developed much before the Nuggets moved on and selected Jamal Murray in 2016 to go along with a core of Will Barton and Gary Harris.

The Knicks were able to take a flier on Mudiay, landing him for Doug McDermott at the deadline this season. At 22 years old with all the tools in the world, Mudiay does indeed possess potential. The problem is, Mudiay nor any coaches he has had thus far in his career have figured out how to tap it. He is signed through next season, but if his production mirrors what we saw from him in the second half, he could be shown the door. Unless he takes his fate by the horns.

Next season should be all about development. Scott Perry and Steve Mills reinforced there will be no shortcuts in this rebuild. As mentioned countless times, Kristaps Porzingis will be out for a majority of next season, if not the whole season. That allows the new coaching staff time to develop the young pieces the front office has been able to acquire.

The guard rotation in particular was replenished with talent after years of having been bereft of young talent. Burke and Mudiay were the two biggest additions during the season, but the main prize has been Frank. He is a pillar of the revamped backcourt. It will be the job of Burke, Mudiay, and Ron Baker to fill in where needed. Baker will find his way into minutes, considering that we’ve seen a good amount from him already. But where do Burke and Mudiay fit in this puzzle?

Let’s start with Burke. His metamorphosis since his January call up was one of the top highlights from an otherwise dim second half of the season. Time in the G League served as Burke’s scared straight moment:

“He’s taking it in more of a professional way than before,” Burke’s father, Benji, told The Detroit News. “He felt that he should be in the league (before) and he didn’t do the little things that he needed to do to be successful; he kind of leveled off.”

A reset in focus was the remedy to his NBA woes. He came on slow as bench guy early on, struggling for minutes due to Hornacek’s fixation on playing Jarrett Jack. Despite an unfair share of playing time, Trey left his imprint.

With the combination of quickness and dribbling prowess, Burke put the defense under pressure. Opposing units were having to react to penetration, thus opening up spots for shooters outside or cutters. His vision has never been bad, but there were moments where you can feel he’s got the flow of the game in the palm of his hand. Playing with familiar faces like Tim Hardaway Jr., Enes Kanter, and a few of his fellow DubKnicks allowed him to get comfortable quickly. That comfort translated to confidence. Confidence is the gasoline of scorers.

That is where Burke contributes the most—getting buckets. That was what got him the attention from Westchester, and that’s the skill that will keep him in the mix. He had his outbursts off the bench (back-to-back 26-point games) but was efficient shooting 51.5 percent from the floor and 40.3 percent from deep.

As a starter, his efficiency regressed (48.7 from the floor, 31.1 percent from three), but his assist total rose from 3.7 per game to 7.7. He had his off nights. There were times where he shot poorly. But there were also great nights, like his 42-point, 12-assist masterpiece. His ability to fulfill the role of a bench scorer just as aptly as running the offense as a starter makes it a no-brainer to keep him next year and possibly beyond.

If the Knicks decide to go small with his buddy THJ at the three and Frank at the two, he’s the guy to run the point. On the flip side, if the Knicks select someone like Mikal Bridges and bump Timmy down to the two, Burke can be your sixth man.

You can run as many simulations of the offseason as you want. Each time, Burke proves his worth. Consistency was a point Scott Perry made sure to address during the season ending press conference. On a given night, you know at the bare minimum Burke is consistently giving you something.

That level of consistency is not something that Emmanuel Mudiay possesses. While Burke’s worst case is sixth man, that is a spot Mudiay should be aiming for as a ceiling. To give him a fair shake, it should be mentioned that the Knicks did not give him a whole lot of time to acclimate his new digs. He was inserted into the starting lineup—over a deserving Burke—in just his fourth game with the team. As a starter, he had his occasional peak (20-point, seven-assist outing vs. the Warriors), but was mostly stuck in the valleys.

He averaged a paltry 9.0 points, 4.1 assists, 2.4 rebounds, and 1.2 steals per game as a starter. He shot 36 percent from the floor including frigid numbers from the free throw and three-point line (65.6 and 23.3 percent, respectively). He was at his best when he was getting to the rim. The problem lied in his insistence on forcing off the dribble jumpers that will never be his bread and butter.

Given his position behind the eight ball in the depth chart, a slight change could do the trick. Hear me out. When the Knicks made the move for Mudiay, some people who’s basketball opinions I have high regard for—David Griffin and our future head coach David Fizdale—gave kudos. Both cited his age and athleticism, hinting at potential.

“Mudiay has been mostly awful in the NBA — a tank commander of the highest rank. But there is an interesting player in here somewhere. He shot well on catch-and-shoot 3s last season. He’s big and fast enough to get where he wants to go, and his vision is ahead of his judgment. He’s shooting 68 percent at the rim as a Knick — blowing away his (ugly) career numbers. Everyone in Denver praises his resiliency. He just turned 22.”

That resiliency could play a key factor in salvaging his career. Mudiay has his faults, to be sure, but they are no different than what other young guards have gone through. At just 22 years old, he is still in the infancy stage of his career. At 6-foot-5, he has the size to take on a new role as a permanent two-guard. It will require a radical shift in his game, but if he wants to stick somewhere he will have to compromise.

Courtney Lee figures to be gone at some point in the next six months. There will be minutes available behind Timmy. Mudiay’s ability to provide energy, particularly on the defensive end, could be his way onto the floor. He flashed glimpses of the requisite defensive energy.

He can carve out a nice chunk of minutes if he can replicate sequences like this:

Mudiay playing with a lot of energy on defense again pic.twitter.com/bFqlLfiDLx

On offense, he could fill the same places on the floor Lee does, most notably in the corners. Mudiay’s off-the-dribble jumper is not a thing of beauty. However, he is good on catch-and-shoot jumpers and shot surprisingly well on corner threes this season. Per NBA Stats, he shot 58.3 percent from the left corner and 46.7 from the right. Conversely, he shot a hideous 28 percent above the break, which is where a majority of his three-point attempts came (118 of 145 total attempts).

The sample size for his corner threes are small (27 total attempts) but it is reason enough to look into. Another sacrifice that may be needed is time in Westchester. Getting reps and perfecting the little things can sharpen Mudiay’s game in the same way it did for Burke and even Hardaway when he was with Atlanta.

There are spots for the taking on this roster. Burke was able to refocus and place himself in position to be an integral piece of the core. Mudiay can join him by relying on his strengths and building up his weaknesses. His fate, just like Burke this year, remains in his own hands. What he chooses to do in the next 12 months will decide where he will fit within the rebuild.