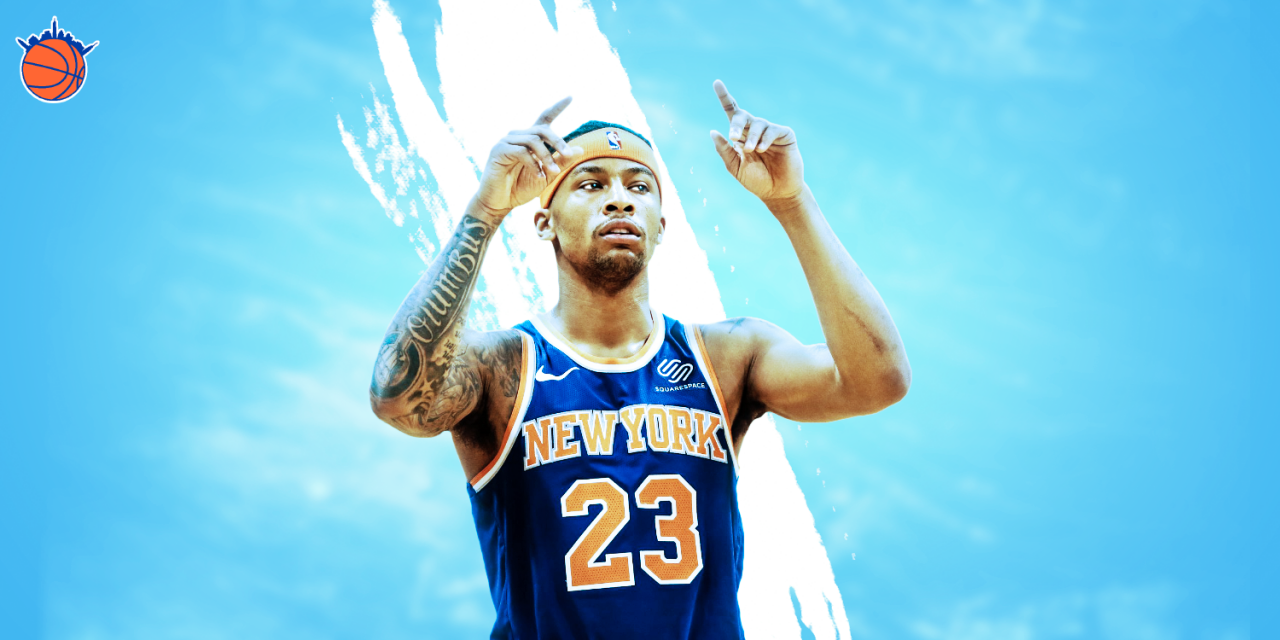 After taking the call and sinking the Celtics during the Knicks’ winning streak, Trey Burke has become streaky himself—costing the team any semblance of consistent guard play.

Following an uninspiring run of four straight losses capped off by a blown lead against the Pelicans, Trey Burke called out the team for its lack of effort. Per Marc Berman of the NY Post, Burke said the club seemed to be content with losing close games against good teams and guys would hang their heads when things started to go wrong.

It’s a familiar feeling. When something goes wrong, like it has gone wrong a few times before, one can easily feel resigned to it happening again. To create a winning culture, a team has to have a short memory and the mental fortitude to push past adversity. Young guys need someone who’s battle-tested to step up and light a fire under their butts.

Archetypically, you want your team’s best player to also be that guy. But it doesn’t always work out so neatly that your star is a naturally vocal leader. Kawhi Leonard and Gregg Popovich’s recent back and forth via the media about whether Leonard was the vocal leader of the squad is a good example of this. Kawhi may never be the guy who calls out his teammates for lack of effort on any team given his personality type, but he leads by example. It was the role playing Manu Ginobili and Patty Mills whom Pop called the leaders of the Spurs squad. Different guys can contribute to a winning culture in different ways that are important. Patty and Manu were vital to those late Spurs squads the same way Trey Burke can be vital to the Knicks—with a vocal presence that can light a whole team up.

Burke backed up the vigor with which he called out the squad with his play over the next few games. THIS is how you have to play to win games, he was telling and now showing them. Over a stretch of four games including the loss to the New Orleans Pelicans and the start of a three-game win streak, Burke averaged 25.7 points on a blistering 58.5 percent from the field. During that stretch, Burke willed the Knicks to a W in Boston with 11 assists and two daggers in the final minute of play.

His play inspired comparisons to the Trey Burke of late last season—the heroic Trey Burke who was a midrange maestro—slithering around picks, catching bigs in the paint with slight hesis, and using his body to shield the ball à la Boston Isaiah Thomas. He was seeing the whole floor as a distributor, slinging cross court passes a step ahead of the help, and hitting his midrange again at an incredible clip. “Is Trey now the future of the Knicks point guard position?” I found myself asking, after shamelessly wondering the same about Emmanuel Mudiay a few days prior.

The next four games, Burke reverted back to an inefficient shell of that player, shooting abysmal lines of 2-of-8, 3-for-15, 1-of-8, and then 1-of-6 from the field. None of this is to say that he was a great player and a leader for those four games and that now he’s an inefficient chucker. It’s more of a testament to the type of player Trey is and can be.

He’s a small scoring guard who loves the midrange a little too much and plays with heart despite some innate defensive limitations. He has a knack for hitting big shots (see: Michigan) or coming up with that clutch steal, but he runs hot or cold.

In a cold spell when his shot isn’t falling, it’s hard for him to affect the game in enough ways to warrant him being on the floor.

It’s especially hard when you consider his limits on the defensive end. He’s a competitor and will always give you his all, but he gets caught on screens too often and doesn’t have the foot speed to always stick with his defender. He plays smart and knows where he should be, often leading him to the right positioning, but he’s only six-foot tall and just doesn’t have the length to stop highly skilled players.

People ask why size matters on the perimeter. Burke does everything right on defense and he can’t contest enough with his height pic.twitter.com/Cfryo9LEVM

He projects best as a sixth or seventh man for a team with a normal rotation, thanks to his boom or bust tendencies (his best hope is to become Lou Williams), but the Knicks have a logjam at guard and Fizdale is trying to give every young guard their fair shake in the lineup.

With Mudiay, Allonzo Trier, Damyean Dotson, and Frank Ntilikina also fighting for those same guard minutes, it seems Fizdale is sort of running out whichever guy has the hot hand for the most minutes. Burke doesn’t work next to Mudiay or Trier very well because they’re all minus defenders. His best spot in the rotation is playing alongside Frankie or Dot to cover for him. And when he’s off, Ntilikina certainly doesn’t have the firepower to keep the offense afloat, and Dotson isn’t really a creator.

Burke is a free agent after this year and has a soft cap hold of just $1.6 million, meaning the Knicks can go over the cap to retain him on a cheap salary. His cap hold is currently the lowest of any other Knick on the roster except for Dotson’s non-guaranteed contract, so he’s actually financially the easiest piece (not of the Knicks main core) to keep. But who knows what type of mayhem this roster may go through if the Knicks sign a max free agent? That $1.6 million might prove invaluable flexibility.

At this moment, there isn’t that much that Burke does meaningfully better on the court than Allonzo Trier, and Trier is 22 to Burke’s 26. Short term, TB shouldn’t be getting more than 15 minutes a night unless he really has it going. Given his similarities to Trier as a player, the Knicks would be smart to try to move him for an asset before the February deadline. The Knicks last three second rounders all seem as though they can become productive NBA players, so if New York can net another second rounder, they should pull the trigger.

If there are no biters, his future with the Knicks will probably depend on whether the club really needs that extra 1.6 million, but he’d certainly be a nice locker room presence to have around. He grinds and always stays ready to take advantage of an opportunity, no matter how many minutes he’s getting. He sets a great example for the other guys about how to be a professional.

We hope he gets more consistent with the week-to-week fluctuations and if he does, it makes it an easy decision to stick with him on a cheap deal that doesn’t cut into cap space (assuming he’s not moved before the deadline). But even if he is a streaky player for the rest of his career, he will always have some role in the league as a spark plug bench guy who can be a vocal presence on the team and play with heart and grit that inspires his teammates around him.