Two Trade Suggestions to Move on From Julius Randle 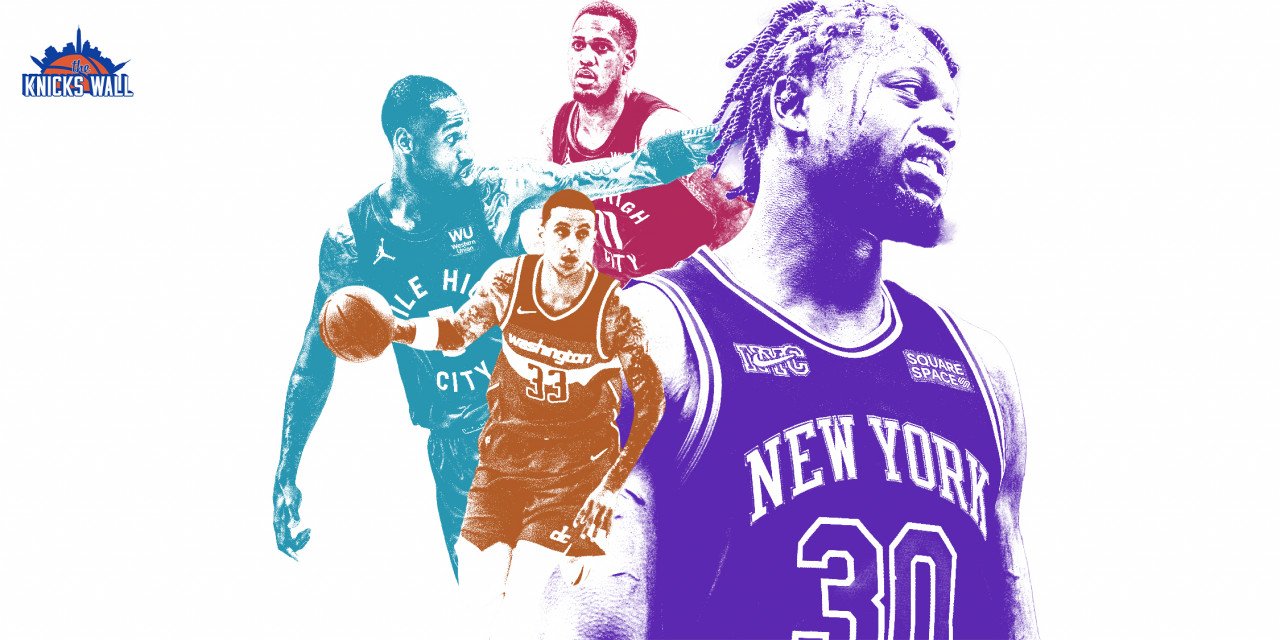 The turmoil for the Knicks this season has centered around All-Star Julius Randle, who could be traded in the summer with his role usurped by RJ Barrett.

Julius Randle’s three-year career with the New York Knicks has been a roller coaster ride. Sandwiched between two underwhelming campaigns marred by scoring inefficiency and effort/attitude criticisms is his career-defining stint in 2020, one of the best individual seasons in franchise history.

In 2020–21, Randle earned an All-Star and All-NBA nod and took home the league’s Most Improved Player award. An incredible stat puts his greatness into perspective: Randle became just the seventh player in NBA history to average 24 points, 10 rebounds, and six assists in a season. Larry Bird, Wilt Chamberlain, Oscar Robertson, Russell Westbrook, and Nikola Jokic make up the rest of the list.

But a lot has changed over the past year for Randle and the Knicks. Since then, Randle’s numbers have dipped in every major statistical category, and more importantly, New York has been losing games. Sitting with a 34-42 and 4.5 games back of the 10-seed Hawks with seven contests remaining, the once destined-for-the-postseason ‘Bockers will almost certainly end up in the NBA draft lottery.

Not too long ago, the idea that New York would entertain a Randle trade was lunacy. Nowadays, there seems to be a legitimate possibility that the big man is dealt just one year into the four-year extension he signed last summer.

For the sake of this piece, say the Knicks front office and staff have their sights set on trading the 2021 All-Star. What could a potential deal look like, and what assets and players should the team look for in return? Let’s dive into two realistic deals that make sense for both sides and get the Knicks back some real value.

Trade #1: Randle pairs up with Jokic in Denver to form perhaps the best 4-5 passing duo in league history

This move has the potential to be both a short- and long-term win for the Knicks. Neither Barton nor Morris is a household name. Still, they are two multidimensional talents with the scoring and playmaking chops to bolster New York’s offensive attack up a peg. Morris could step in as a veteran starting point guard if Thibodeau still resists starting Miles “Deuce” McBride and Immanuel Quickley, and Barton would make for a terrific first or second wing off the bench. Not only that, but the 2023 first-rounder gives the Knicks the chance to add another young stud to their already-promising core.

Let’s unpack the players from this hypothetical trade, starting with Morris. New York’s point guard situation has been one big game of musical chairs over the past decade, with no floor general sticking around long or contributing at a high level (the last very good point the Knicks had was Raymond Felton).

With that said, Morris has the makings to change this narrative and provide some dependability to a position long plagued by inconsistency. The 26-year-old is reliable in more ways than one. Firstly, Morris has been somewhat of an iron man over his brief NBA career, suiting up in 70-plus games in three of the last four seasons. As the saying goes, sometimes the best ability is availability.

But even more critical than Morris’ physical durability is his reliability as a facilitator and mid-range scorer. From a passing standpoint, there are very few point guards in the world better at taking care of the ball and limiting mistakes than Morris, who has ranked in the 98th percentile or better in turnover percentage for four straight years, per Cleaning the Glass. Morris’ combination of efficiency and usage rate from the in-between area is also elite—he has converted 49% of his mid-range tries (88th percentile in accuracy) this season, with 38% of his total field goals coming therein (67th percentile in frequency).

The second and final player the Knicks receive in this deal is Barton, a 2010 second-round pick who has quietly carved out an exceptional seven-plus-year stint with the Nuggets. Earlier this month, he passed former Knick J.R. Smith for most three-point makes in Denver franchise history. And his two-way skills would likely ensure that Barton is a fixture in the rotation from the get-go.

Starting with a not-so-known defensive ability of Barton’s, he is surprisingly effective at blocking shots. His block percentage is an above-average 0.7% (69th percentile among wings) and has been as high as 1.1% earlier in his career (then good for 89th percentile). Barton’s 6’9″ wingspan and instincts have allowed him to accumulate several highlights blocks as a pro, including this game-saving one on Malik Beasley against the Timberwolves early in the season:

While Barton is a sneaky solid defender, he is first and foremost a bucket-getter, and for two good reasons. He’s averaged 11.5 points or more going on seven straight years and currently ranks second on the Nuggets in scoring behind only Jokic (14.6 points per game). But what makes Barton’s scoring particularly valuable is that he can create his own offense consistently and from all over the floor.

Of all NBA wings to log 1,000-plus minutes this season, only six have self-created on more than/equal to 45% of their made layups, 26% of their threes, and 58% of their mid-range swishes while posting an effective field goal percentage of 52%. Among these names are widely considered some of the upper-echelon isolation scorers in the game—Devin Booker, Zach LaVine, Anthony Edwards, and C.J. McCollum. Barton is also one of the six members of the club. However random this stat find may be, it nonetheless elucidates that Barton would instantly be in the running for the best one-on-one scorer on the roster. In a day and age where creating your own shot is key to success in the postseason, that is meaningful.

Trade #2: The Wizards land another bona fide star in hopes of convincing Bradley Beal to re-sign this summer

The second and final mock trade has New York participating in a 1-for-4 player swap with the mediocrity-ridden Wizards. It’s worth noting that neither Carey Jr. nor Isaiah Todd would likely stick around with the Knicks as they were merely included to match Randle’s salary. The prizes of this transaction from the New York side are Kuzma and Kispert.

After playing a diminished role in his final few seasons with the Lakers, Kuzma has arguably put together the best year of his career in Washington. Previously a small forward, he has spent most of his time (90% per Cleaning the Glass) at the power forward spot this season and has beautifully adapted to the new position. Kuzma’s board-snatching aptitude and respectable playmaking chops at the power forward spot would soften the blow of losing a do-it-all big like Randle.

Despite being an undersized 4 at just 6’9″, Kuzma is grabbing a career-high 8.5 rebounds per contest and ranks in the 76th percentile among all bigs—power forwards and centers—in rebounding percentage (21.2%). And spread throughout the long NBA season, there were stretches where Kuzma rebounded the ball as well as anyone. For example, take the month of October, when he pulled down 11.8 on average or when he grabbed 11.1 over a 13-game stretch in January. His fantastic rebounding stretch in January culminated in a 22-rebound effort versus the Magic on the 9th.

Along with rebounding the ball with great frequency, Kuzma is also a dangerous facilitating threat for a big. With the ball in his hands more than ever before, Kuzma has had opportunities to show off his passing chops and made the most of them. His assists per game mark of 3.5 is good for fifth in the league among power forwards. The eye test also points out that Kuzma has taken great leaps as a passer. Check out this behind-the-back dish below. Earlier in his career, Kuzma probably wouldn’t even have attempted this pass, never mind completed it:

Kuzma loses the ball on the fast break, recovers it, then throws the no-look behind-the-back pass to Beal for the layup pic.twitter.com/AufhCHqQqg

While Kuzma is the best player from this package in the here-and-now, Kispert has the chance to be the prized jewel of the trade. Drafted 15th overall in 2021 out of Gonzaga, Kispert was universally believed to be the top three-point shooter in his class. Kispert struggled to find his touch early in his rookie campaign but has looked more like his sharp-shooting self since the All-Star break ended.

Over the 16 contests post-All-Star break, Kispert is putting up 11.5 points per game while shooting 40.9% from deep on 5.8 attempts nightly, per ESPN. One aspect of what makes Kispert such a superb sniper is his limitless range. Defenses must be aware of Kispert as soon as he crosses the halfcourt marker because of his comfort level hoisting 30-footers.

Another two important wrinkles of Kispert’s shooting skill is how great he is at shooting off of movement and working himself into open looks away from the ball. At this juncture, Kispert can’t reliably create his shot from deep off the dribble, but he makes up for this hole in his game by being an intuitive, ever-moving off-ball cutter. Furthermore, Kispert’s balance on his shot ensures that he can let it fly even when his feet/body aren’t fully set.

With this triple, @corey_kispert set a @WashWizards franchise record with 17 games with 3+ threes as a rookie! pic.twitter.com/2kF7N2ndX4

Trading an All-Star like Randle, who resurrected the Knicks from a hapless mess to a feisty postseason contender, would be a tough pill to swallow. Fans should not forget his 2020–21 contributions anytime soon. But with Randle regressing and New York piling up the losses, the writing is on the wall for both sides to go their separate ways this offseason. These hypothetical deals provide the Knicks with the personnel necessary to compete sans Randle.