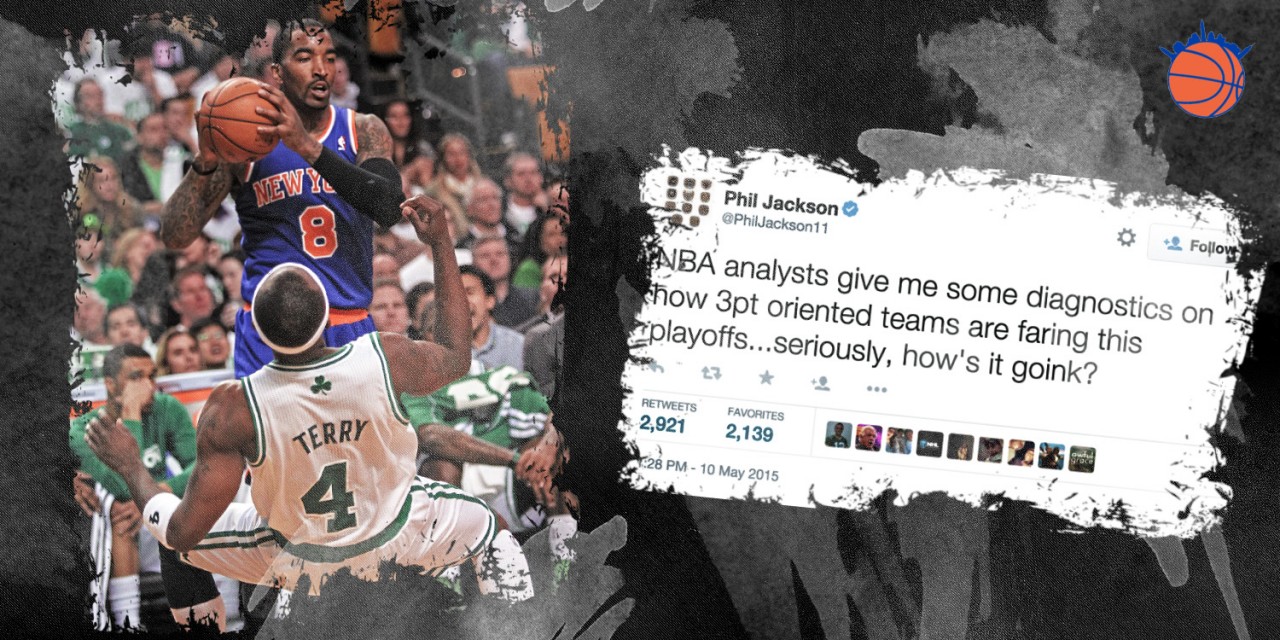 The Knicks, playoff NBA basketball spectators for seven years now, are, in part, victims of their own past, including two precise moments characterizing why the team is where it is now.

Over the course of a decade, every franchise will have moments and make decisions during and after those moments that will shape their future for years to come. Sometimes for the better, but with the New York Knicks, it’s often for the worse.

Linsanity, trading for Carmelo Anthony, trading away Kristaps Porzingis—these decisions (or phenomenon in one case) undoubtedly shaped the team’s future, but in other cases some seemingly innocuous occurrences created ripples that can only be seen in hindsight. And sometimes, the smaller events are more emblematic of the Knicks, and what it’s like to be a Knicks fan.

54 wins undone with a single elbow.

The best Knicks season I can fully remember. Through pure necessity the Knicks become a prototypical small-ball team and they’re well on their way to a sweep of the seventh-seeded Boston Celtics.

New York leads by 19 points with seven minutes remaining in the fourth quarter of game three, when Jason Terry swipes at the ball as J.R. Smith catches the ball on the right wing. Smith responds with an elbow to Terry’s jaw as he faces up.

Smith is given a flagrant two and thrown out of the game as Terry pops up and marches down the court towards Smith. Knicks take a 3-0 series lead, but it feels hollow—everyone knows Smith won’t play in Game 4. The recently named Sixth Man of the Year had put up at least 15 points in each of the series’ three games, and that missing offensive spark paired with a now-aggrieved and grizzled veteran Celtics team meant the possibility of sweeping Boston and resting up before round two were all but gone.

Celtics won Game 4 by seven points; Jason Terry had 18. But with Smith set to return for Game 5 at the Garden at least they could close out the series at home. The Atlanta Hawks and the Indiana Pacers were tied at two games apiece, if the Knicks could end it then they’d have at least two more days off than whoever won that first-round matchup.

New York bounced back at TD Garden, finally vanquishing the Celtics, but Smith still wasn’t himself and the Pacers’ defense wasn’t about to make things easier for him. Throughout the second round, he wouldn’t shoot better than 36.4% from the floor in any game.

With a single elbow, J.R. upended a year’s worth of momentum and good vibes. If Smith doesn’t hit Terry, they likely finish off Boston in five games, if not four, and who knows how far those dominos stretch. Perhaps it was karma as much as it was Roy Hibbert blocking that dunk from Anthony.

The Knicks managed to survive six games with the Pacers; it’s not unlikely that, had J.R. not thrown that elbow, his play doesn’t dip and the Knicks are able to make it past the Pacers to the Eastern Conference Finals.

They’d be heavy underdogs to the Heat, but the first Eastern Conference Finals appearance since 2000 would have made the last near-decade of slop a bit easier to swallow. And once you’re there, who knows? The Knicks managed to win three of their four games against Miami that season, albeit LeBron James and Dwyane Wade didn’t dress in their final regular-season matchup.

New York may have been a single, split-second, boneheaded decision away from reclaiming past glories. Yet this way feels more representative of the last decade of Knicks basketball. An inexplicable, unforced error unraveled a team which until that point had managed to win in spite of itself.

NBA analysts give me some diagnostics on how 3pt oriented teams are faring this playoffs…seriously, how's it goink?

Five years ago there was a contingent of basketball executives, commentators, analysts, and fans who still were not convinced that three-pointers were, in essence, good. Jackson had won more NBA championships than any other coach by running the Triangle Offense, which often utilized more mid-range jump shots inside the three-point arc than the growing consensus offensive schemes in the contemporary league.

When Jackson sent that tweet, the NBA was in the midst of the conference semi-finals. The Golden State Warriors were down two games to one against the Memphis Grizzlies; the same was true for the Hawks and Cleveland Cavaliers, up against the Washington Wizards and Chicago Bulls, respectively. Later that night the Houston Rockets would fall behind the Los Angeles Clippers 3-1.

Portland was the only team that shot as many threes as the Warriors, Rockets, and Cavs did that season, and the Hawks were eighth in that department. Jackson wasn’t wrong that teams that relied on the three were struggling, but the remark seemed especially tone deaf given that all four of those teams were in the second round of the playoffs while his Knicks possessed the second worst record in the league.

And all four teams rallied to win those series, largely because they got hot from deep.

It exemplified Jackson’s refusal to adapt to the modern NBA. Had the Knicks not fallen to fourth place in the lottery, it’s likely they would have selected Jahlil Okafor—a big man with a game right out of 1995. Then there’s Kurt Rambis trying to stick Porzingis at small forward.

It says a lot about the last decade that a tweet and a typo can define so much of an executive’s tenure, but it’s such a clear metaphor for the Phil Jackson Knicks. The sentiment was outdated and almost immediately proven to be false, while it’s implementation was slapdash and poorly executed. “Goink” is to typos as Derek Fisher’s Triangle system is to NBA offenses.

There’s been no shortage of disappointments and close calls this past decade. Anthony’s Knicks never reached their full potential, and the Porzingis teams were abandoned before they could really begin. Eventually you’re left with the conclusion that the team being cursed. A spectre is haunting the Garden; the team is possessed by a demon, and things won’t change until he is exorcised.