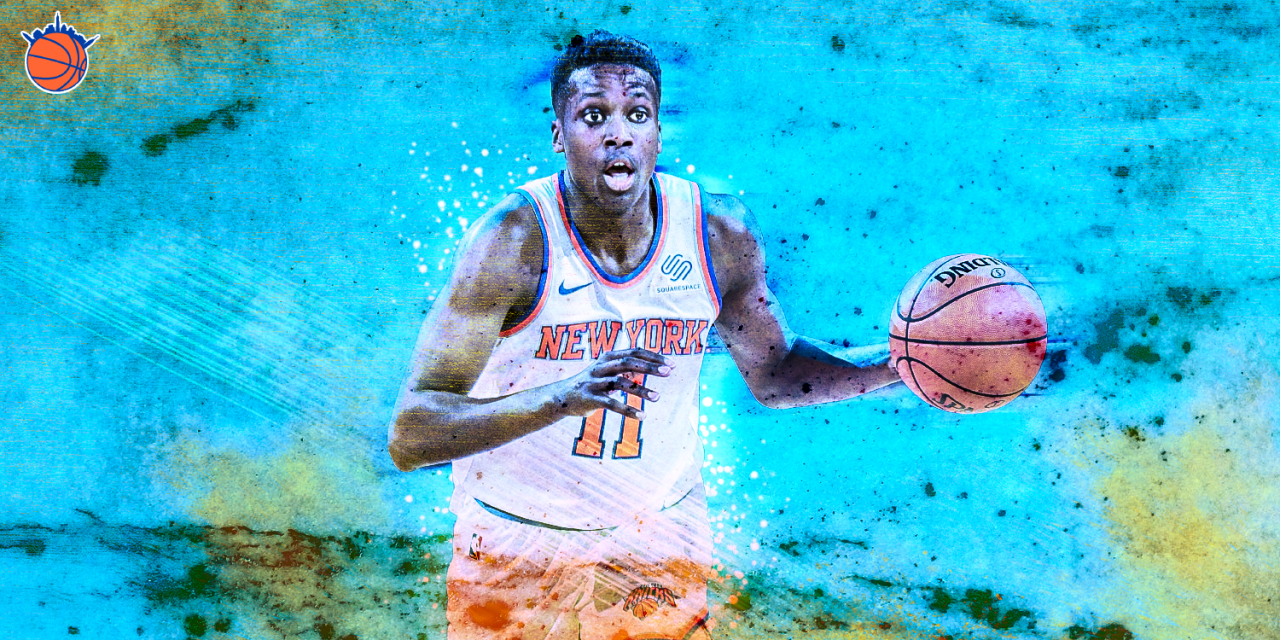 To put it short and sweet, the Knicks’ “process” has been, well, a process. Sans a few encouraging cases of individual player development (Kevin Knox, Mitchell Robinson, Damyean Dotson, and Allonzo Trier, to name a few), the Knicks, as a whole, have not seen much improvement from a team development standpoint.

While this, from a tanking perspective, has certainly been embraced by the majority of Knicks fans (myself included), it’s nonetheless deflating to see your team get run out of the gym on an almost-nightly basis.

One particular aspect of the Knicks’ season that has been largely disappointing is the development, or rather, non-development, of lead guard Frank Ntilikina. The 20-year-old Frenchman has struggled to make significant strides in his second year, and is averaging just 6.1 points on 34.4 percent shooting from the field and 30.2 percent from behind the arc, to go along with 1.9 rebounds and 2.7 assists. And for someone lauded for their seemingly endless amount of potential on the defensive side of the ball, Ntilikina is only averaging a paltry 0.7 steals a game, tied for 147th in the league with Devin Harris, Ersan Ilyasova, and Harry Giles.

Despite some of Frank’s perplexing shortcomings, there are signs of a good basketball player. But the man drafted to play point guard in the antiquated Triangle Offense appears to be an ill-fit in today’s fast-paced, run-and-gun league. For stretches, he seems just as bewildered in today’s NBA as Dorothy did when she first stepped in Oz. Frank, you’re certainly not in France anymore.

Frank’s struggles could prove to be insignificant if we look at him, in a different light entirely. Maybe he’s not an NBA point guard. But maybe he’s never been all along.

(Disclaimer: I am not advocating for the Knicks to give up on Frank as a point guard altogether. I think it would be foolish to not give him an extended look at the lead guard spot. Having said that, Frank has never truly been a modern NBA point guard to begin with.)

After all, he was brought in as a “Triangle” point guard.

If there is one thing that is certain, it’s that a point guard in the Triangle Offense does not operate as a traditional point guard. Just ask Gary Payton, Derrick Rose, and, to a lesser extent, B.J. Armstrong, who also faced a steep learning curve after getting drafted by the Bulls back in 1989.

Ntilikina was projected by Phil Jackson and fellow Triangle-extraordinaire/lead scout Clarence Gaines to be a complementary fit in the Triangle Offense. The point guard’s role in the system, again, is much different than a typical point guard’s. Instead of looking to get into the paint and create for others, the lead guard typically acts as a spot-up shooter. In fact, the first action in the Triangle Offense is for the point guard to simply get it into the center in the low post, and cut to the corner. In France, Frank’s role was similar—set up a half-court offense, play inspiring defense, and hit open three-pointers.

Guys like John Paxson, Steve Kerr, Derek Fisher, and an aging Ron Harper were all ideal for this sort of role, because they, for the most part, lacked explosiveness but made up for it in smarts, defensive tenacity, and a solid shooting stroke. Sound familiar? Well it should, because those are basically all the positive traits that catapulted Frank to the eighth pick in 2017’s draft.

This is what French PG Frank Ntilikina did in the 4th quarter to lead France to the gold medal. 16 pts (4-4 for 3). Unreal. #FIBAU18Europe pic.twitter.com/dFGnFZ2sIK

Following the firing of Phil Jackson after the draft, I immediately wondered what Frank’s position would be in Jeff Hornacek’s shapeless offense. Since he would no longer be confined to the Triangle, Frank’s skill set seemed out of touch with the modern NBA. So would he continue play point guard, or would he become an off-guard, given his size, offensive skill set, and lack of speed?

For the majority of the season, Hornacek played Frank at the backup 1, to mixed results. While Frank excelled on the defensive end, he often looked confused on offense—hesitant and unsure of his role on offense. Ntilikina deciding between passing and shooting appeared to be the basketball equivalent of a janitor deciphering a complex numerical equation on a blackboard. O.K., maybe not that easy.

Still, he looked uncomfortable on offense, to say the least. However, when Hornacek started Frank at the 2 guard for nine games at the end of the season, we saw a glimmer of hope. At least, offensively.

Success at the Wing (Sort of)

From a pure scoring standpoint, Frank has had the majority of his success playing either of the wing positions. While he was still wildly inconsistent at the wing, he put up career highs in scoring to finish out the season—scoring 17 and 16 points—and looked a lot more comfortable overall.

He mirrored those performances this year, again scoring 17 and 16 points in back-to-back games against the Warriors and the Nets, respectively. While he did technically start these games at point guard, he played more of an off-ball role, with Hardaway handling a lion’s share of the offense, not to mention pushing the ball up the floor as a pseudo–floor general.

After eventually being removed from the starting lineup, and, in time, the rotation, because of a combination of inconsistent play and injuries, Frank came back with a vengeance to score 18 points against the Hornets. Here, Ntilikina came off of the bench and played a combo-guard like role in Fizdale’s offense. Just look at his shot selection in that game—spot-up threes, pull up jumpers, and post-ups. The majority of his points were not as your prototypical point guard arsenal.

Frank Ntilikina has 18 points in 11 minutes in the second half — a career-high. He was scoreless in the first half. He's as hot as he's ever been with the Knicks and feeling it against the Hornets. pic.twitter.com/vT7D4s0ypg

He then followed that game up 16 points, marking a career-high over a two-game span for the French Prince. Again, he came off of the bench and managed to knock down open jumpers in a role where, the majority of the time, he operated as a secondary ball-handler. Combining for just five assists over those two contests, Frank was far from a primary facilitator, but he showed that he could knock down open, assisted jumpers—and get a little creative with the ball when his defender is closing out, even.

How to Properly Employ Frank

Ideally, the best way to employ Frank would be similar to how the Celtics utilize Marcus Smart—as a versatile, combo guard who has the ability to guard the best player in the opposing backcourt, hit the occasional open three, and give their team intelligent halfcourt play.

Like Smart, Frank is a very inconsistent shooter. But in the case of Smart, the Celtics always manage to play better when he’s is on the court. This is particularly evident this season, as the Celtics have a 115 Offensive Rating with Smart in the lineup, in conjunction with a 105 rating on defense (per Basketball-Reference). Frank sort of gives the same kind of vibe when he’s playing well and not necessarily scoring—just not to the same magnitude of Smart just quite yet.

If Frank could emulate Smart’s intangibles off the bench in a combo role, he’d still be an ultra-valuable contributor going forward. Look no further than Smart’s own massive contract, despite his offensive shortcomings, last offseason for validation of that notion.

He could also, realistically, start at the 2 guard with Tim Hardaway Jr. sliding to the bench in a sixth man role (or just traded, altogether). But obviously, it doesn’t look like Hardaway will be removed from the starting lineup anytime soon—especially when you factor in his monstrous contract—but pairing Ntilikina with a more prototypical point guard like Emmanuel Mudiay could provide the starting unit with a defensive boost, while also maintaining a presence that can create penetration from the lead guard spot (the Mudiay-Ntilikina two-man tandem even has a +4.1 NetRtg in limited moments this season).

Frank could also thrive with the presence of a point forward. When the rumors surrounding a Frank for Dennis Smith Jr. swap were circulating, I couldn’t help but think of how perfect the pairing of Ntiliikina and Luke Doncic would be. Luka would remain the floor general on offense, Frank would play a spot-up shooting/secondary ball-handler role, and he would continue to defend the opposing team’s best perimeter player. A point guard in title, but a versatile, Swiss army knife of a player in job description. Obviously, a player like Doncic doesn’t come around every so often, but finding a player who can initiate offense from another position on the floor could be crucial for Ntilikina moving forward.

Again, I’m not advocating to not give Frank point guard minutes—the Knicks should explore every avenue with their young, still-raw player. What I’m saying is, New York never truly drafted Frank to be a modern-day point guard, so if he isn’t one, then so be it. But it’s time to make a decision sooner, rather than later.