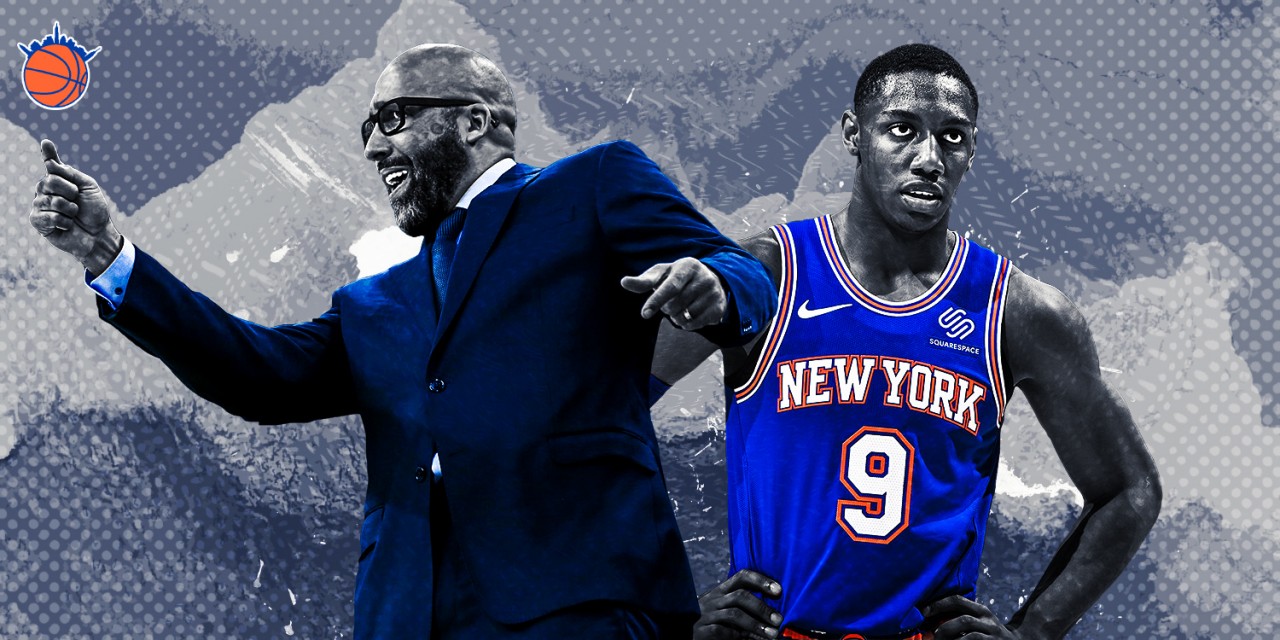 The Knicks surely added quality veterans in free agency, but has their offense changed? That depends on David Fizdale and who he decides to play.

A common refrain around basketball circles in October is: “preseason doesn’t matter.” And when it comes to, say, Boban Marjanovic and Steven Adams splashing down threes, that’s probably true. But there are generally real takeaways as well, from stylistic choices made by coaches to shot mechanic improvements or lack thereof (hello, Dennis Smith Jr.’s shot hitch, my old friend!).

So, let’s use what we’ve seen through four preseason games and the season opener to try to answer four burning questions about how second-year Knicks head coach David Fizdale’s offense might look this season.

Question One: Need for Speed or Slow and Steady?

Preseason tends to be a fast and sloppy affair. Between young guys eager to leave their imprint on the game, journeymen scratching and clawing for a roster spot, and vets trying but not super trying, generally we see lots of turnovers, lots of fast breaks, and lots of threes. Last year, on average, teams’ pace of play dropped 4.76 possessions a game from preseason to the regular season. Only the Phoenix Suns managed to increase their pace once the season started.

So why do I bring this up now?

Because with all the mismatched and sometimes ill-fitting parts on this team, there’s one common thread that runs through all the players they should be prioritizing most: killer transition potential. This is true for R.J. Barrett, Julius Randle, Dennis Smith, Mitchell Robinson, and even guys like Trier, Knox, and Payton are at their best attacking a shifting defense.

And yet, most of this summer’s additions want to do the exact opposite. Marcus Morris wants to dribble for a few seconds before launching a contested 20-footer. Taj Gibson wants to grind out halfcourt possessions, and, apparently, launch some threes when the mood hits. Bobby Portis just wants to shoot, period, whenever and whatever the situation, and that’s easiest for him to do when the game slows down.

Through four preseason games, the vets seemed to be winning the clash of styles. Sure, the Knicks’ pace of 104.75 would’ve led last year’s NBA by a full possession per game, but it’s a bottom-third game speed in this year’s preseason, and would’ve ranked 17th in last year’s preseason. If this year’s Knicks were to slow down as much as the average team from last year, their pace would land just barely north of Orlando and San Antonio, two teams with rock-solid defense and sound halfcourt fundamentals. This would be an absolute disaster for a team as inexperienced and inconsistent as the Knicks.

Luckily, in the season opener against the Spurs, we saw a team shake off a slow and ice-cold start to get in passing lanes, force turnovers, and get out on the break. Their pace of 109.5 would have been the third-fastest game they played last season, and the 29 fast-break points they scored would’ve been the second-highest. Getting out in transition allowed guys like Barrett and Randle to get to their spots and put their bully-ball games to good use.

If they’re able to play that fast all year, they’ll make life tough on their opponents night in and night out.

Question Two: Who gets the ball?

After the free agent splurge of July 1st, I ranked the pre-Taj players by their passing willingness/ability and here’s what I came up with:

Smith, Randle, Barrett, Morris, Portis, Trier, Knox, and Ignas Brazdeikis all posted usage rates above 20% for their respective teams last season. Kadeem Allen was at 19.6%; it was the first time Payton was below 20% since his rookie season, too. That’s a lot of mouths to feed and not a lot of guys whose first preference is to cook for others. Plus, Fizdale did little last year to deter players like Smith, Trier, Knox, and Mudiay from falling into iso-heavy ball-hoggery.

While the first official game of the season did feature five players with usage rates over 20% (not counting Ntilikina’s 30% in two minutes of gameplay), I’m pleased to announce that for stretches—roughly one and a half quarters—the ball movement was as crisp as it’s been in years; in that span, the Knicks looked like an actual, disciplined basketball team. Of course, the fourth quarter came and they fell apart like a house of cards left outside in a thunderstorm thanks to a flurry of bad shots and worse fouls, but still: baby steps.

Question Three: Is there a system?

This has been the question since Fizdale took the reins. Even with a young team seemingly constructed via the philosophy that the more players with questionable feel for the game the better, there were expectations that the supposed player-whisper could instill a sense of pride, blue-collar toughness, and discipline that would serve the youngsters as they got older and the cast around them improved. Much like Brett Brown during the nascent Process days or Kenny Atkinson when he first took over in Brooklyn, the hope was that a gritty defense and uptempo offense would at least cover the mistakes and give the team a puncher’s chance.

But through one season, there was little in the way of an offensive system and even less for defense. This year’s roster is much improved, but as full of questions as last year’s.

So is the offense.

On one hand, as mentioned above, there were times when the ball was moving without sticking and the Knicks seemed locked into getting to their spots. Fizdale likes to set up with one guy, usually Randle, with the ball on the block, and an overloaded weak side where players can screen for each other and run off for threes or cuts to the rim. The system is uncomplicated and relatively reliable, but with the lack of shooting on the roster, the lanes remain exceedingly tight and the decision-making predictable.

However, even this baseline of an offensive principle is fairly encouraging, as Fiz works to institute an offense step-by-step while teaching the sets to the young guys and integrating the newer vets. It may not be Mike Budenholzer or Brad Stevens (or even Nick Nurse)–level offensive revamping, but it’s a start.

And then there’s Fizdale’s play-calling. Whether because of the aforementioned inexperience and lack of chemistry, which is natural for a young team with so many new faces, or the lack of elite feel among some of the team’s go-to options, or just the plays designed and their lack of counters should something go wrong, Fizdale remains rather underwhelming as an X’s and O’s guy—especially out of timeouts.

Julius Randle’s game-winner against his former Pelicans in the preseason was a good example.

The lack of urgency is noticeable here. Why is he dribbling between his legs with a second and a half left? There seems to be no impetus to get to the basket (Randle’s best skill) or get one of the better shooters open coming off movement. Why is Ellington in if he’s just going to stand with his hands on his knees, not go for the shot, and not even offer a diversion for the defense?

Fizdale has always been more of a motivator than a tactician, but he’s going to have to figure a balance to the two this year.

Question Four: Is there a method to the lineup madness?

The biggest talking point over the preseason was: who was going to win the battle of the point guards? All three ostensible candidates, Payton, Ntilikina, and Smith, spent their on-floor preseason time bricking every shot and throwing passes away. When the season started, it did so with Barrett as the nominal point guard and Trier, who’d been benched much of preseason, as his backcourt mate.

This lineup, predictably, didn’t do great. Trier was out of sorts from the jump, got roasted time and time again by Bryn Forbes, and couldn’t find the range. Smith, when it came his turn, was somehow worse. While clearly still working himself into game shape after a back injury robbed him of much of preseason, he was an unmitigated disaster on both ends of the floor. Between giving Dejounte Murray a free path to the rim seemingly every time down the floor, and the worst shot selection this side of Andrew Wiggins, it was a rough showing for the expected starting point guard. Frank Ntilikina played slightly fewer than three minutes, of which he was okay in the first and terrible in the second. He was promptly pulled and didn’t return.

The fact that Fizdale spent the entire preseason telling anyone who would listen that he had no clue who the second guard would be shouldn’t come as a surprise to anyone who followed the team last year. His experiments can often seem a little more “throw it at the wall and see what sticks” than you’d hope for. However, with Elfrid Payton’s emergence in the second and third quarter as the only competent guard on the roster outside of Barrett, and the expected return of Mitchell Robinson, a lineup should now have established itself: Payton, Barrett, Morris, Randle, and Robinson. This still leaves room for Smith or even Knox to fight their way into a starting role, but for now, this is the only lineup that fits the “keep what you kill” ethos Fizdale loves to espouse but is questionable about actually following.