Veteran Neophytes: How Will the Knicks Manage Their ‘Tenured’ Prospects? 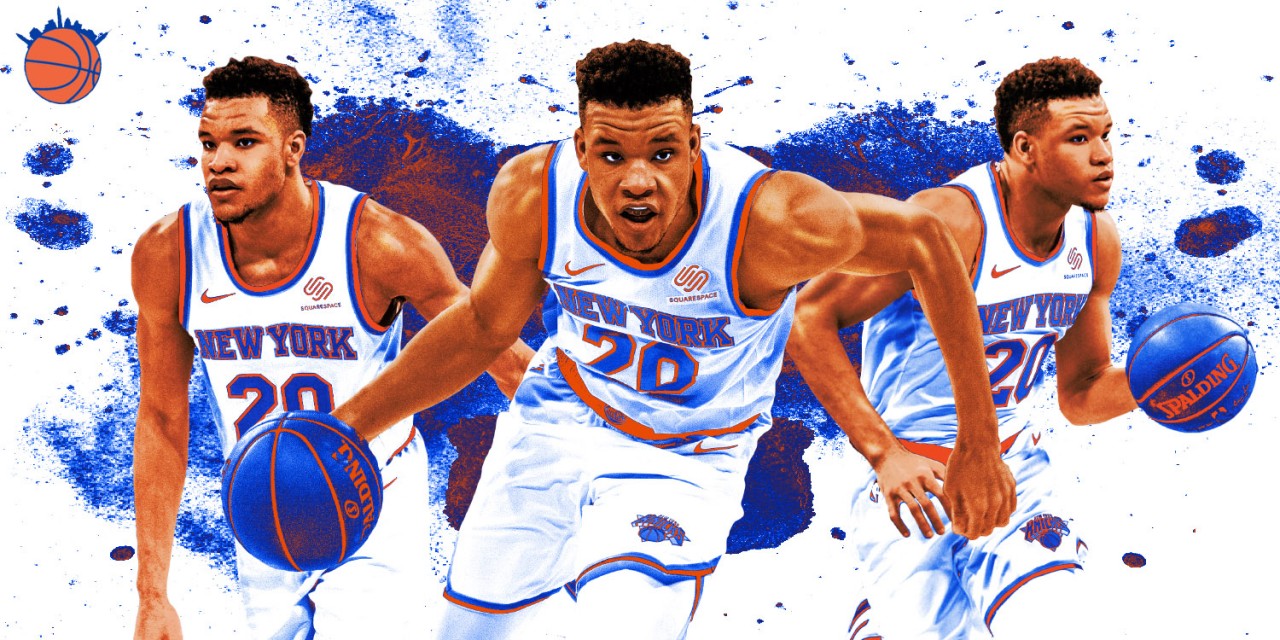 Part of Leon Rose’s new regime is maximizing potential from the Knicks’ slew of still-young prospects like Kevin Knox and Frank Ntilikina.

Leon Rose spoke publicly on Wednesday for the first time since he assumed the role of President of Basketball Operations for the New York Knicks. And, generally speaking, he did not disappoint. Some of what he said should serve as music to Knicks fans’ ears.

He touched upon the Knicks’ coaching search—noting he’s already spoken to Mike Miller, and he plans to have a permanent coach in place in late July at the latest. However, it was a couple of comments about some of his younger players that really stood out, especially considering they essentially marked the first public player endorsements from the newly christened Knicks head honcho.

Of course, he stated the obvious when referring to last year’s first-round pick R.J. Barrett and second-year pivot man Mitchell Robinson as “two young core pieces.” A front office can’t really give a younger player higher praise than that. But it was his comments about some of the Knicks’ “other” young players that seemed to really resonate. Well, at least from the perspective of your typical “glass-half-full” Knicks fan, i.e., me.

He mentioned Kevin Knox, the 2018 lottery pick whose career has been, to put it lightly, a mixed bag thus far. But Rose apparently has hope for the athletically gifted, yet seemingly aloof forward.

“I look forward to working with Kevin [Knox]. I think he’s just starting to scratch the surface.”

We hope so too, Leon.

He also referred to Dennis Smith Jr. as a “special talent,” and considering his trade value is at an all-time low, next season might be Smith’s best shot to prove himself as a serviceable NBA player.

But what was really music to Knicks’ fans ears was a few words about his own former client with the CAA, Frank Ntilikina. Rose essentially echoed every single Frank “stan”s words in one simple sentence:

“Frank Ntilikina, given the right circumstances, I think can really prosper.”

Have New York’s last three drafts been perfect? Absolutely not. Are they all still salvageable? I think the answer is, unequivocally, yes. Robinson and Barrett look like legitimate studs, and some of their other young players are still, well, young enough to right their respective ships. Under the right leadership, this could happen as early as, say, next year.

But as always with the Knicks, that if is a big one. Especially with more homegrown talent in the fold.

It’s pretty much a given that Barrett, Robinson, and in all likelihood, the Knicks’ 2020 draft pick will all get considerable minutes under whoever the Knicks’ next head coach is (my money is still on Tom Thibodeau). However, with a more balanced roster next season—like not signing a multitude of mismatched journeymen to bloated one-year contracts—they can still find considerable playing time for their more tenured prospects, so to speak.

We’ll start with everyone’s favorite question mark, Frank Ntilikina. Of course for him, it’s always been clear that regular playing time are priorities 1, 2, and 3 for his development. Whether it’s a dubious coaching decision, a pesky groin injury, or a combination of both, Ntilikina hasn’t played enough over his first three seasons to come anywhere close to his potential. But Ntilikina showed marked improvement this past season, despite what his otherwise pedestrian numbers indicated (classic Frank!).

Still, his numbers were, technically, up across the board; at least when it came to his offense. His shooting percentage (39.3%), points per game (6.3), and three-point percentage (32.1%) were all career highs, albeit in a shortened season.

The way to get Ntilikina on the court next season is simple—play him at multiple positions. He can (and should) still play the backup point guard spot, but you can easily slide him over to the 2 or 3 and you’d still be playing to his strengths. Put him on the opposing team’s best offensive backcourt player, and let him do all the dirty work. What Ntilikina really has to do to get consistent minutes, however, is to improve his three-point shot. If he can shoot it at basically the league average, the Knicks can play him at the 1,2, and sometimes 3 just to get his defense on the court. But if he can’t down open shots, that puts yet another coach in a precarious spot rotation-wise.

Kevin Knox is another “veteran” prospect who still reminds us of a rookie. Well, it’s not too far off, considering he’s only played one full season and was in both David Fizdale and Mike Miller’s doghouse. To be fair though, Knox didn’t show the coaching staff enough on either side of the ball to warrant consistent playing time. And let’s face it—if you’re not markedly outplaying Bobby Portis (with all due respect, he’s just a ball hog), then you’re doing something wrong.

Knox has shown a lack of confidence on offense and a complete lack of interest on defense. Actually, it’s hard to say if he’s looked motivated on either side of the court. Still, he’s shown plenty of glimpses as to why he was a lottery pick in 2018. His size, athleticism, and (at times) shooting, has made him the ideal player, at least on paper, in the modern NBA.

One thing that could potentially unlock the best version of Knox—and get him consistent minutes—is a position change. He’s proven to be a pretty plodding player at the 3 (and the 2 for that matter; thanks Fiz), so it might be in both Knox’s and the Knicks’ best interest to slide him over to the 4.

Leon Rose is on record saying the Knicks need a “shooting big man.” This, of course, is inherently ironic, thanks to the questionable Kristaps Porzingis trade. But a need is a need, and the Knicks definitely need some shooters to space the floor for Barrett and Robinson. But what if somebody told you the ‘Bockers might already have an option in-house?

Kevin Knox has enough size for a stretch four in today’s modern NBA, especially after putting on some bulk last season. He’s been an up-and-down three-point shooter throughout his career thus far (just 33.7%), but he certainly has a better touch than incumbent four-man Julius Randle, who is probably better off coming off of the bench next season, and he definitely doesn’t iso as much.

Presumably, if Knox is guarded by bigger, slower power forwards as opposed to rangy and athletic wing players, he could open up his game to new heights. He’ll have a quickness advantage on both offense and defense, and instead of a plodding small forward, he’ll be one of the more athletic power forwards in the league.

Another forgotten player from last season—one who Rose, unfortunately, didn’t mention by name—is Damyean Dotson. A Phil Jackson holdover, Dotson has carved out a niche as a 3-and-D rotation player. Well, other than the fact that he’s not always in the rotation.

But last season was weird (Or is it this season? Whatever). They basically had three of the same player—Reggie Bullock, Wayne Ellington, and the aforementioned Dotson. The last regime clearly favored their free agent signings, and with Ntilikina also getting minutes at the 2, Dotson’s leash was shorter than ever. But in a prove-it season, he should get some minutes at both the 2 and the 3, especially considering his shooting is the ideal complement to fellow wing Barrett. He’s a plus defender, and the Knicks have a shockingly high Defensive Rating when he and Ntilikina are paired together. Getting Dotson, Ntilikina, and Barrett in the game at the same time should be a priority for the Knicks’ next head coach—especially with Barrett playing the point forward role.

Last but not least, we have DSJ. At the very least, Smith could play a little bit of backup point guard. Ideally, he’d be the Knicks unquestioned starter at point guard, but last season made that seem like the craziest statement of all time. Rewind a year before that, however, and it was pretty much the opposite. So, yeah, who even knows.

Either way, we still haven’t really seen what Ntilikina and Smith, the eighth and ninth picks of the 2017 draft, respectively, can do with seemingly complementary skill sets. And as a score-first point guard and up-and-down defender, Smith could also serve as the ideal sixth-man. Even if the Knicks draft a point guard in October, Smith could serve as a microwave bench scorer, and the Knicks could possibly parlay that into a win-win trade for both sides. After all, he’s still only 22 years old—not to mention a freakish athlete.

Still, you never know what you’re getting with the New York Knicks. They could go off and sign five more veterans and bury their young players on the bench again. But this regime feels different. Rose seems different. We still don’t know how he’ll fare as an executive, but there is an aura around him that feels like he knows what he’s doing. And considering we’ve seen and heard from so many people around the Knicks who don’t know what they’re doing, I think we, as Knicks fans, are basically qualified to make such an assertion.

It’s safe to say all Knicks fans want to rebuild the right way. We can’t land free agents, so why wouldn’t we? The Knicks still have enough young talent, with more on the way, to do so. It’s just about giving the right players the right minutes.

Hopefully, the right players also happen to be the homegrown players. But there’s only one way to find out.

»READ: How the Knicks can manage their veterans and young stars