Which Veterans Should Be Integrated into the Foundation — and Who Should Be Traded? 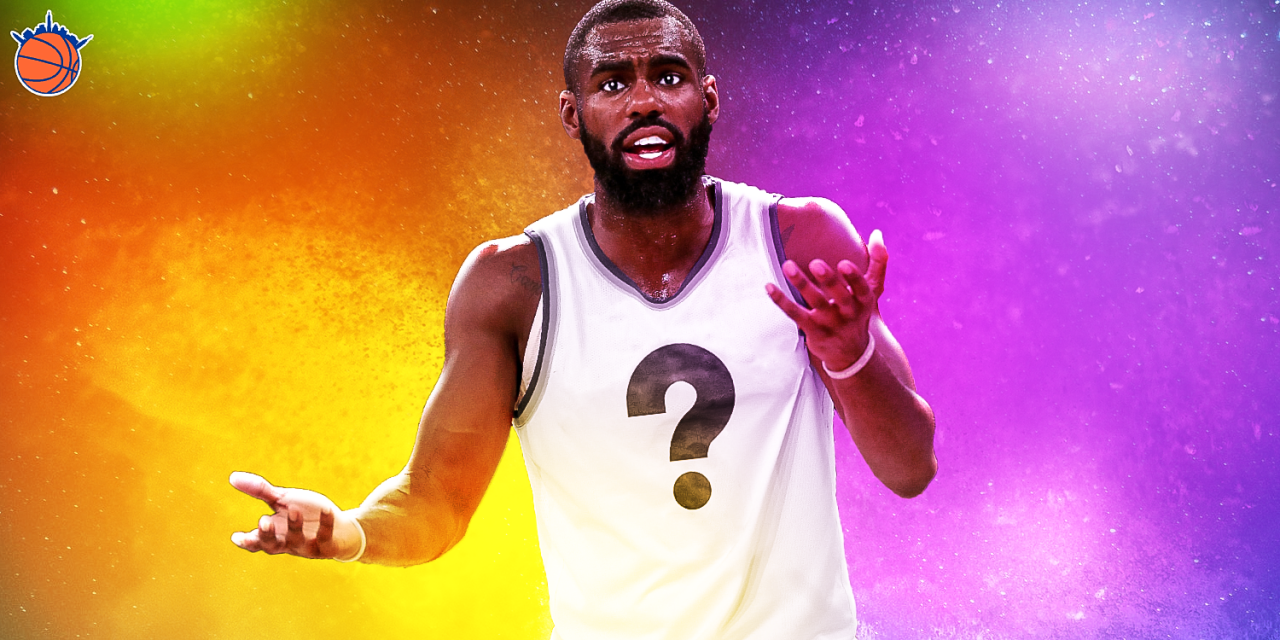 The Knicks’ front office—Scott Perry and Steve Mills—has to decide who stays and who goes from the team’s vets starting next week.

Black Friday is the national kickoff to the shopping season. Shopping season in the NBA unofficially kicks off December 15, however, when players signed over the summer can be included in trades. The Sixers got things popping a little earlier this year, but trade activity begins to rise with the infusion of available players.

For New York, this date is could not come any sooner. They have a surplus of bodies on the bench, one of whom will be shown the door to make room for Allonzo Trier. The message all year has been about developing the young core.

I thought I had a firm grasp on what the young core was. Then Fizdale said this, per Mike Vorkunov of The Athletic:

“I don’t like calling them older guys,” Fizdale said. “We don’t know who’s going to end up with us in the future. What’s Trey — 25? Tim is 26. Enes is 26. I don’t know. We’re developing them, like crazy. The growth that they’ve shown in a short amount of time, all of these guys are development to us. That’s why I don’t want to get us too caught up in, oh, we gotta develop just the 19-year-old, the 20-year-old. We have some 21-year-old guys, some 22-year-old guys. All of these guys can be major pieces in our future. So we have to be fair from that standpoint and give everybody the right amount of assessment and the right amount of attention.”

Fizdale is entitled to his definition of young core. For all intents and purposes, the young core consists of Kristaps Porzingis and guys drafted within the last two years—Frank Ntilikina, Damyean Dotson, Kevin Knox, Mitchell Robinson, and Allonzo Trier.

Everyone else should be fair game to be called a veteran and labeled as expendable.

With trade movement likely to see a major uptick, a team in the talent acquisition phase like the Knicks should be open to whatever opportunity presents itself. The team is 8-17 and not headed to the playoffs. Bad record aside, they do have some players in which opposing teams can be interested.

So far teams have called to check the status on Frankie and Dotson. They’re not available. But now, as more players are eligible to be traded, the Knicks may receive calls on other names. Who should be traded and who should be kept?

This group is comprised of the guys who do not fit in the future plans of the team. The main question for these guys is not will they be traded, but when. To help you visualize it, every time you see Kanter, Lee, Burke, or Mario remember that could be Mitchell, Dotson, Trier, and Knox on the court instead.

That has been the crux of Kanter’s subtle unhappiness this year. When he exercised his player option for one more season, he was essentially buying time to build his stock up, whether he realized it or not.

The good news is Kanter has the numbers to attract to suitors, even as an antique item in the pace-and-space era. He ranks 10th in the league in rebounds per game at 11.6, and is fifth in offensive rebounding, per NBA Stats. The problem is that points and rebounds are where his contributions end.

Robinson is the better defender despite having no idea what the hell he’s doing at times. Conversely, Kanter is a turnstile on defense. Too often his stat line has looked considerably better than his actual performance.

Don’t set a timer to a Kanter trade—it will take longer than we’d like. As the trade deadline draws closer a ravenous rebounder such as Kanter on an expiring deal becomes more appealing than it does in the middle of December.

If for whatever reason Kanter is not dealt by the deadline, his time with the Knicks should be over. His presence takes away from the development of Robinson, and with Porzingis returning minutes will be hard to find.

The sentiment on Kanter holds true for Trey Burke. He has had a career resurgence in New York, and for that Burke and the Knicks will always be able to say they accomplished something. The truth is, Burke can definitely contribute to a team—just not a team where the Knicks are developmentally.

Burke is looking to get paid this offseason if his Roc Nation management signing is any indicator. However, he only affects the game when he catches fire—which has been few and far between this season.

Burke can be used similar to Lou Williams on the Clippers. Doc Rivers rocks with Shai Gilgeous-Alexander and Avery Bradley to start, but down the stretch L.A.’s coach adds Lou as one of the guards. When Burke is on one of his hot streaks, he fulfills this on the Knicks roster. The problem is Allonzo Trier can fulfill that same function for half the cost of what Burke will likely ask.

Courtney Lee’s departure is the easiest to justify. At 33 years old he is considered a senior citizen on this squad. His 3-and-D mold gives him immediate value on the market once he proves he is healthy. He returned to action Monday with seven points in 16 minutes in the home loss to the Wizards. His showcasing is just getting underway. A team like the scoring-deprived Grizzlies look like a no brainer landing spot once Lee shakes off the cobwebs.

Finally we have dear Mario. He avenged Timmy when he stepped over Giannis, and for that I will always love him.

He was one of the lottery reclamation projects and has come up the smallest. If Scott Perry can find a deal, then great. If he cannot, he does possess the potential as a tank commander until he is turned loose at the end of this season.

‘Stick Around at the Right Price’: Emmanuel Mudiay, Noah Vonleh

Welcome to the gray area. The great Ari Gold once said the garbage man who wins the lottery does not throw away the ticket. Emmanuel Mudiay and Noah Vonleh can both be considered lotto tickets the Knicks won something on—what kind of win they turn this into is tough to decide. Each guy is in the midst of a career renaissance this season, making it much more difficult to simply flip them.

Let’s start with Noah Vonleh. Fizdale has said Vonleh has been the team’s most consistent player, and he’s not wrong. This season Vonleh is averaging 8.4 points, 8.1 rebounds, and 1.0 blocks per game. He has shot the ball extremely well with an effective field goal percentage of 56.9.

Recently, he has started to add a three-point shot to his arsenal. Since returning to the starting lineup, Vonleh has shot 59.1 percent from deep on 22 attempts. Obviously that number will dip with more attempts, but if he can hit an outside shot and rebound like a mad man there has to be a discussion about keeping him at a reasonable price. It all depends on where Vonleh sees himself moving forward.

If Vonleh would be open to a Kyle O’Quinn role as the first big off the bench—keep him without thinking twice. This will require Vonleh to bypass a possible payday elsewhere to come back to the Knicks on a team-friendly deal. This is where the desire to play with Fizdale can become a major asset.

The same can now be said for Mudiay, who has played his way out of the automatic “sell high” group. Fizdale has rebuilt his confidence, and we have started to see the fruits of Fizdale and Mudiay’s labor. The 22-year-old has a firm hold on the starting point guard position, and unlike Vonleh, Emmanuel does not have a star returning from injury to take his spot.

In recent games, Mudiay has quietly become one of the leaders. The turning point in his season came against the Grizzlies. He was the most vocal about getting a measure of revenge on Fizdale’s former team.

A week later, Mudiay put together his best game as a Knick with 28 points and seven assists in a comeback overtime win against the Bucks. Not only were his numbers great, but he assumed the closer role—something we have not seen from him during his Knick career.

Mudiay’s play has now shifted the question of his fate. He has improved his shooting in every area, including at the rack where he has struggled most of his career. This season he is shooting a career-high 54.7 percent at the rim and also posting a career-high in effective field goal percentage at 52.3 (via NBA Stats).

What the Knicks have to ask themselves is how confident are they going into free agency. If they think they can land Kyrie Irving or Kemba Walker, you flip Mudiay for something while you can. But rebuilding a guy from the ground up only to flip him for a pick or cap space is an unsatisfying resolution. Similar to Vonleh, if a middle ground could be found, re-signing Mudiay is something we can get behind.

‘Under One Condition’: Tim Hardaway Jr.

I will keep this brief. Tim Hardaway Jr. will remain a Knick unless a deal for a superior player becomes a real possibility. The easiest example of this is Bradley Beal. The Wizards are on the verge of implosion and the team is now open to trading their star players, Beal and John Wall.

If the opportunity to get Beal were presented, and Hardaway Jr. along with one of the young guys was the asking price, the Knicks would almost have to swing the deal, right? Beal is the better player even with Hardaway Jr.’s leap this season. That is the only type of deal for which Hardaway’s name should be tossed around in trade talk.

Perry, Mills, and Fizdale have some decisions to make in the near future. They have to decide the resolution of their talent acquisition phase. Their reclamation projects have begun to bear fruit; do they integrate these guys into the foundation or flip them for other assets?

This all ties back to what they forecast this team doing next season. If they plan to lure Kevin Durant, wouldn’t they want to bring the most presentable roster to the negotiating table? Having young players is nice, but as we have seen with the Lakers, the value of those young players can drop at a given moment. Big decisions lay ahead for the front office. Trade season may give us some answers as to where they think this team is.