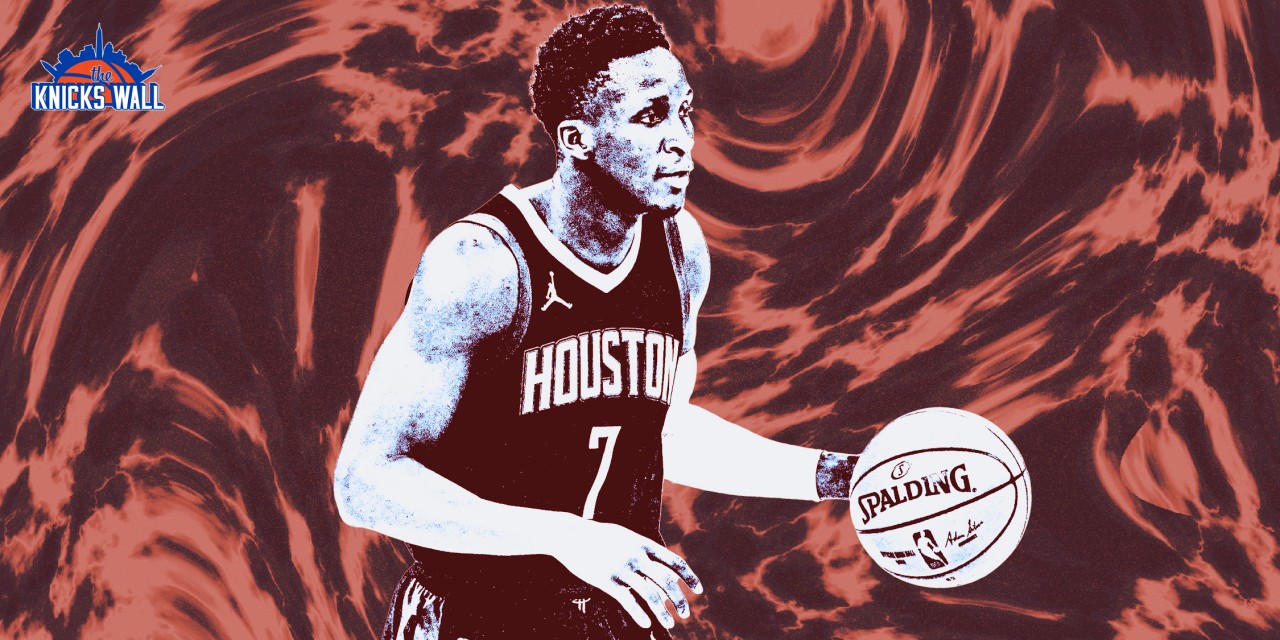 Victor Oladipo is not expected to stay with the Rockets. The Knicks could squeeze in via trade or free agency and upgrade their team.

Over the weekend, ESPN’s Adrian Wojnarowski reported that Victor Oladipo turned down a contract extension from the Houston Rockets. The two-year contract worth $45 million was the most Houston could offer, but Oladipo said no in the hopes of securing a longer-term deal, Wojnarowski wrote.

At one point, Oladipo was one of the most pleasant surprises in the NBA, blossoming into an All-Star, winning the Most Improved Player award, and becoming the new face of the Indiana Pacers after they traded away Paul George, their one-time franchise player. Oladipo excelled on both ends of the floor and helped Indiana stay competitive.

The second time he was traded for a franchise player—James Harden—has been fruitless, though, as Oladipo’s production has dipped significantly as a result of suffering a multitude of injuries over the past few seasons, namely a ruptured quad tendon in 2019. Houston isn’t itching to dump him, but that outcome is becoming more likely by the day. Wojnarowski named the Knicks as one of the teams looking into acquiring the two-time All-Star, writing:

It is typical that teams become more focused in pursuing trades closer to the deadline, which is still nearly four weeks away. Houston has yet to engage with teams on trade talks involving Oladipo, sources said.

Nevertheless, Oladipo, 28, has the chance to become one of the best two-way players available at the trade deadline or in free agency. The Miami Heat and New York Knicks are among teams that have had an interest in Oladipo, and both have the salary-cap space to sign him outright in the summer.

Even though Oladipo is a shell of the player he once was, his scoring abilities could help the Knicks in their pursuit for the postseason. They should look into acquiring him for the right price.

Truth be told, Oladipo hasn’t been all that great this season, especially with Houston. As a Rocket, he’s averaging 19.9 points, 4.9 rebounds, and 4.7 assists in 15 games on ugly shooting splits—38.7% on field goals and 31.3% on threes, which brings him to a well below league-average effective field-goal percentage of 45.0%. Put simply: yuck. He also isn’t playing defense at the All-Defensive level to which he was accustomed.

Still, if his percentages rebound, Oladipo could fill a need for the Knicks. While New York’s defense has shined brighter than almost every other team, their offense is still rather dull. With the second-ranked Defensive Rating and 23rd-ranked Offensive Rating, per NBA Stats, it’s obvious that New York could use a facelift on the offensive side of the ball.

The Knicks have limited shot creation outside of Julius Randle, R.J. Barrett, and Immanuel Quickley. Oladipo can still create shots for himself and snap passes to teammates. He has the handle and craft to get into the lane and drive to the hoop or pull up for a jumper. Defensively (entering Wednesday’s game), Oladipo isn’t completely shot. His block percentage and steal percentage both rank in the 70th percentile amongst combo guards, according to Cleaning the Glass.

Although Oladipo is someone that could benefit the Knicks, Leon Rose shouldn’t get into a bidding war over him. Few players, if any, are worth trading for when they’re about to hit the open market. This is especially the case when a player is being heavily linked to another team, which is the Miami Heat in Oladipo’s case.

Oladipo’s connection to Miami is one of the worst kept secrets in the league. They have been linked in rumors and reports for years now. Keith Pompey of The Philadelphia Inquirer reported over the weekend that those around the league believe Oladipo is “a candidate to sign a contract with the Miami Heat during the upcoming free-agency period.” Additionally, Kevin O’Connor of The Ringer reported in January that Oladpio “still hopes to find himself in Miami.”

It’s not worth spending serious assets to acquire a player who can leave shortly after being acquired. Barrett, Quickley, Mitchell Robinson, and any first-round picks in at least the next two or three years should be off the table entirely. It’s not even worth a second thought—none of them are worth dealing for Oladipo. New York would also be wise to keep Obi Toppin and the Pistons’ second-round pick for this year out of a package.

So, where does that leave New York in terms of assets? The best they would have to offer Houston is a few barely used young players—Kevin Knox, Ignas Brazdeikis, and Frank Ntilikina, who was recently elevated from a seat deep on the bench to the starting lineup due to injuries. The Knicks also have six second-round draft picks to offer in the three drafts following 2021.

The idea of using any of these assets to pry Oladipo out of Houston has some merit to it. If the Derrick Rose trade is any indication, Leon Rose seems to view second-rounders as assets to use in a trade rather than as pieces to add players. Rose also traded away the 33rd pick in last year’s draft for a future second-rounder. This Knicks front office seems to regard second-rounders as trade pieces. And they would be wise to do the same for the three young players just named.

Ntilikina and Knox only see playing time when players are injured while Brazdeikis has been a mainstay with the Westchester Knicks during his time in the league so far. For their sake and New York’s, they are best used as trade chips. The dream of incorporating these young players into the winning brand of basketball being built right now is just that—a dream.

Tom Thibodeau speaks loudly and clearly with his actions. There is no room for his rotations to exceed 10 players unless someone gets injured or into foul trouble. Fair or not, these young players are on the outside looking in. Their value depletes further with every DNP-CD.

It’s worth noting that Houston will most likely ask for more than young players not in New York’s rotation and/or future second-rounders. It makes sense—Oladipo was the only notable player the Rockets received when they traded away their franchise player. Of course, they want a worthwhile return for him. But New York’s front office shouldn’t bust its hump to meet Houston’s price.

Victor Oladipo has the potential to be helpful, but he’s not worth going all in for, contract considerations notwithstanding. His efficiency is straight-up abysmal right now. Take a look at his percentages, courtesy of Cleaning the Glass, if you dare. The numbers in the colored boxes show his percentile rank relative to other combo guards in the league.

“Is that really who this guy wants the Knicks to trade for?!”, you understandably ask. To be honest, Oladipo’s viability as a trade target has a lot to do with the current (lack of) availability of high-level players for which to trade. He’s one of the few good players that wouldn’t cost an arm and a leg to trade for. No realistic trade deadline acquisition is perfect. Oladipo could be a good get if New York can leverage his contract situation into making Houston accept a return that doesn’t involve one of the Knicks’ best assets.

“If Oladipo is going to be a free agent, why not just wait to sign him in the summer?”, you also understandably ask. Well, if New York trades for him now, they have him for the rest of this season as they push for the playoffs. Hopefully, New York doesn’t give up enough assets that Oladipo leaving in free agency greatly stings. The two sides going for a test drive would give them a better idea of how much they would want a future together.

The rest of the season would essentially be an audition for both sides—the Knicks get to see how he meshes with the team and can decide on if he’s worth signing long-term. Oladipo gets a trial run with the Knicks, which could help convince him that New York is a place worth sticking around in. If Oladipo goes elsewhere or remains in Houston, the Knicks don’t get this chance, and they would still have to rely on speculating how adding him would look if they wait until free agency to get him.

Taking a flyer on Oladipo is a low-risk, high-reward move. Even at his worst, he should be better than all but three or four players in New York’s rotation. If he shows more flashes of his old self, he would easily be a top-three player on the team.

Typically, a flyer is an opportunity for a young guy who has shown some intriguing skills to build consistency and improve in a new environment. Taking a flyer on Oladipo is offering a guy with two All-Star nominations under his belt—a guy who pushed a LeBron James–led team to seven games in the playoffs—a chance to rediscover the mojo he once had.

Is it possible that Victor Oladipo will return to his 2017–18 form? I don’t think so. I don’t think anybody does. But he can still be a decently productive scorer and playmaker. For a team badly in need of some offensive firepower, Oladipo could provide just that at a cost that probably doesn’t adversely affect New York’s future.