Noah Vonleh Could Be the Blueprint to Kristaps Porzingis’ Frontcourt Pairing 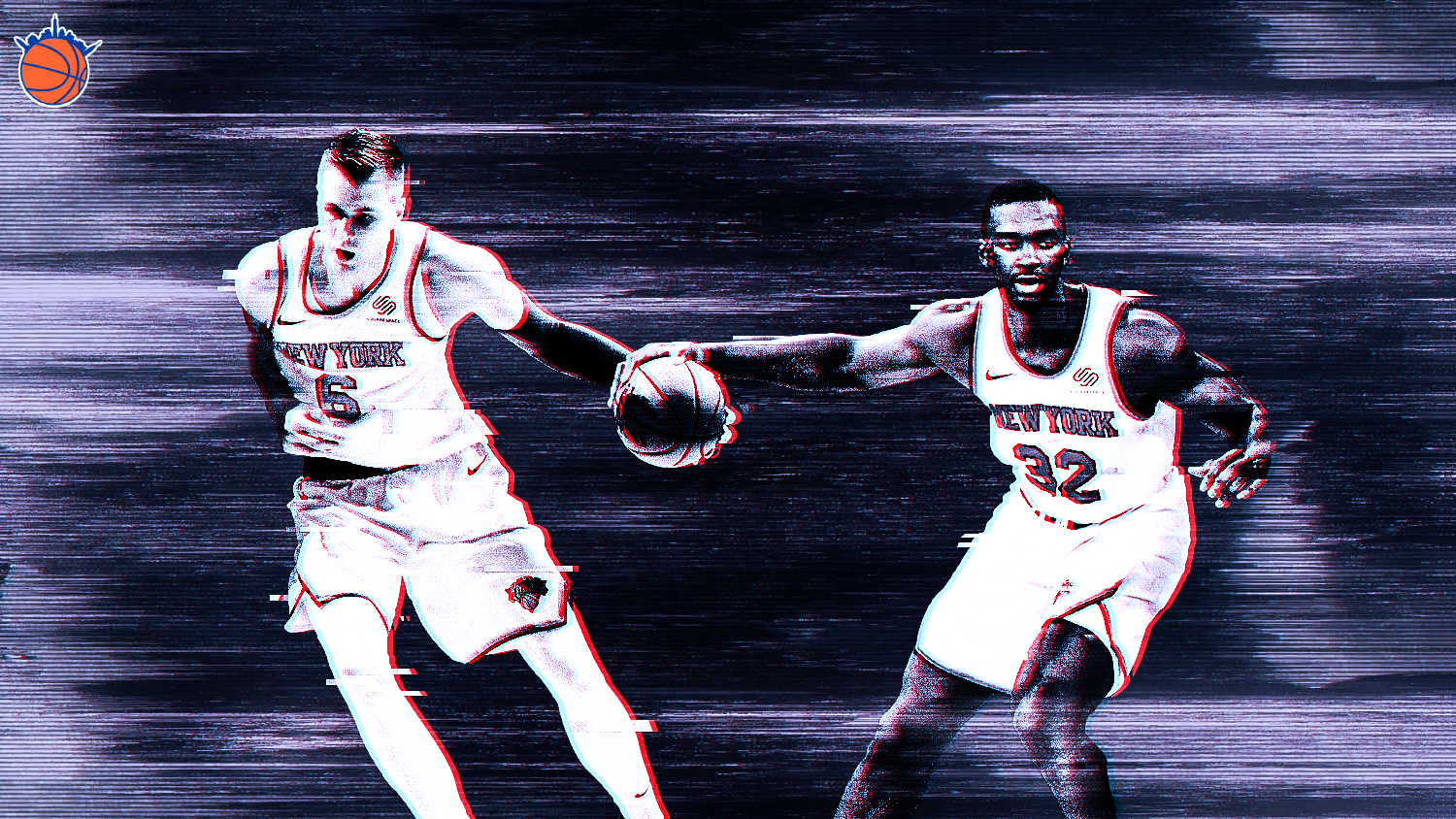 Noah Vonleh is experiencing a career renaissance of sorts in the early season for the Knicks. Here’s why he fits the bill as an excellent frontcourt mate for Kristaps Porzingis.

A preeminent question surrounding Kristaps Porzingis since he entered the league has been whether he’s best suited to play as a 4 or 5. While the importance of the label fades with more free-flowing offenses and hybrid roles, what does matter is matching KP long-term with a frontcourt partner who can cover for his weaknesses and help accentuate his strengths.

We know that no matter where you assign Porzingis on the scorecard, he will play some hybrid role where he stretches the floor and at times, dominates from the block or tries to get to the hoop. On defense, his lateral foot speed has never been his strong suit and that doesn’t figure to change coming off an ACL tear, but he’s a vicious shot blocker and help defender.

KP needs a strong rebounder next to him, since he has never been one. He needs someone with lateral foot speed to help cover the quicker of the two opposing bigs. He needs someone who can step out and force defenses to stay honest so the lane isn’t clogged when KP goes to work.

The Knicks have a 23-year-old big man on their roster who could potentially check every one of those boxes in Noah Vonleh. He might not be the long-term solution as KP’s frontcourt partner, but Vonleh possesses many attributes that could make them a good fit, if he decides to re-sign with the Knicks after having found some of the mojo that has evaded his NBA career thus far.

After never finding real rotation minutes in his previous NBA stints, Vonleh has had a resurgent start to the season under Coach Fizdale’s meritocracy. He’s been earning it with his insatiable motor and hustle, gobbling boards to the tune of 14.2 per 36 minutes.

Robinson with the miss, and who else but Noah Vonleh there for the offensive board and SLAMS it home, through the contact!

Noah made the FT, Knicks re-take the lead 60-59. pic.twitter.com/lFoor7TOMR

At 7’3”, KP has averaged only 8.2 rebounds per 36 minutes over his career. Chalk it up to his slight frame (he’s never going to look like Boban) and the amount of time he spends so away from the hoop, but KP has never been a great rebounder. He got boards and box outs from Enes Kanter and Robin Lopez as frontcourt mates, but both of those guys don’t spend any serious time more than 15 feet away from the rim. Kanter is also a defensive liability, making them unsuitable partners.

On defense, Porzingis would often get burned when switched onto a quick guard or responsible for a mobile, small-ball 4. While the ideal position for KP is as close to the basket as possible so that guards feel his gravity when penetrating into the paint, it’s impossible to avoid playing him outside against faster guys sometimes. The key for a frontcourt mate will be the ability to take the more mobile of the two bigs so KP can spend more time near the paint. That requires lateral quickness and foot speed, two traits necessary to a good help defender. When KP does get burned from the outside, he needs someone quick enough to get over and contest.

Vonleh has the foot speed and motor. He has proven capable of stepping up to take on quicker guys outside (though he needs to stop the ticky-tack fouls).

He does a great job bothering Bradley Beal, using his body to stay in front until the very end. His lateral quickness and great length (7’4” wingspan), though helpful for defending on the perimeter, haven’t really translated into being a great weak side shot blocker. Vonleh has been a good shot blocker statistically, swatting 2.5 percent of opponents shots this year (73rd percentile among bigs), but too often, he’s extra cautious about leaving his man. He’ll need to be more aggressive about coming over to help in a world where he’s playing alongside KP.

On the other side of the ball, Vonleh works really well next to Porzingis, too. He’s mobile and proficient at taking up space on dribble handoffs; enough that some of the main action can be centered around him and a guard, while KP curls around a screen on the weak side to potentially get the ball in motion towards the rim.

It’s fun to imagine Tim Hardaway Jr. with his newly improved vision coming around a Vonleh dribble handoff and having the choice to pop the middy, take it to the rim, or dish to KP, who is already around a screen and on his way downhill from the elbow.

In order to work with KP, Vonleh will need to be able to shoot the ball a little. He doesn’t have to stretch the floor all the way out, but he needs to make defenses aware that he’s willing to take a wide open three so he can get his guy out of KP’s way.

Vonleh’s gotta pop that to keep defenses honest. Especially after having already drilled one in the game. https://t.co/3va6jwh4d9

If he can pop this right here, Vonleh will be able to keep defenses honest enough to make room for KP to operate off those sets where he’s catching the ball at the elbow. Vonleh has made three of his 10 three-pointers on the year, so the sample size is too small to project, but his form isn’t terrible and he’s made 50 percent of his mid-range shots this year.

In the open floor is where this combo can be most lethal. KP is already a walking matchup nightmare, and teams get the easiest mismatch switches by running out in transition, which happens to be Vonleh’s specialty. He operates as almost a point forward at times. He’s always looking to push the ball up the floor off defensive boards (of which he is in the 92nd percentile among bigs in grabbing).

For a big like KP, who is not really an open-floor ball handler, it’s nice to have a guy like Vonleh who can grab it and run. KP is such a dangerous shooter that defenses have to respect him and make sure they have someone locked in on him trailing the play.

Vonleh is signed to a one-year deal and has been playing his butt off. KP should return near the end of the season. If the Knicks are able to sign Vonleh beyond this season, they have a guy who has all the physical tools and mentality to play as a perfect complement to Kristaps.

He still needs to take improve his jump shot and increase spot-up jumpers and play more aggressively as a help defender, but the Knicks have been giving him all the opportunities and motivation he needs to keep developing his game. It’s possible he’ll develop into a long term solution as KP’s lengthy partner in crime—a big man’s solution to small ball.