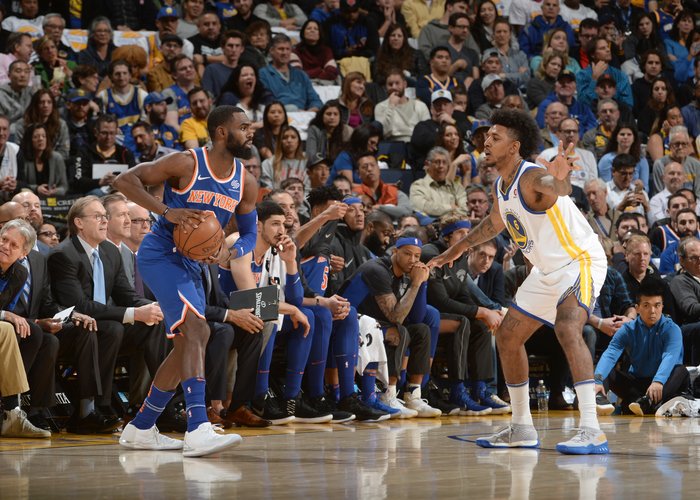 The Knicks host the star-studded Warriors on Monday night, searching for a continuation of some strong signs from their youngsters.

The biggest show in the league hits the biggest stage. Had Kristaps Porzingis been healthy for this tilt, it would be highly anticipated. Instead, it is more of what you have come to expect from a second half meeting between the Warriors and the Knicks. The Dubs are fine tuning for the playoffs while the Knicks are hoping to catch up to tanking teams.

Both teams come in fresh after having Sunday off. In their previous bout, the Warriors took down the Oklahoma City Thunder at Oracle. The Knicks are coming off an impressive home performance, only they lost theirs to the Celtics 121–112. Tonight’s game means little in the grand scheme of things, but if there is one thing that can give the young guys and fans something to be hopeful about, it’s a win over the Warriors.

Defeating the Warriors is a pipe dream. For this game, it will be more important to measure the little things. How do the Knicks approach this game? Are the young guys going to keep playing the bulk of the minutes? Will the Warriors have to leave second gear to put this game away?

These are the questions that should be answered by the end of the night. Until then, let’s see what else to look for tonight.

New Kids On the Block

So far the greatest news since the All-Star break has been Jarrett Jack’s minutes. Since the second half of the season tipped off, you and I have played as many minutes as Jack: zero. To his credit, Jeff Hornacek has been a man of his word and has opted to give Emmanuel Mudiay the starting point guard job. Frank Ntilikina and Trey Burke (more on him in a second) have both played at least 25 minutes a night.

Freshly signed Troy Williams—who looks like a cleaned up version of Bubble from The Wire or Fredo from Onyx, I can’t decide—has gotten burn immediately. This is fantastic. With nothing tangible to play for, it’s time to start seeing what lineups work best, whose game fits with who, and most importantly, who is worth keeping around at season’s end.

One of the least talked about storylines as the season winds down has been Hornacek’s future. Coaching a tanking team while simultaneously trying to keep your job has to be one of the toughest and unforgiving gigs in sports. Some teams see the honor in it if done properly (e.g. Brett Brown). How can a coach keep his job by losing as much as possible? Basically, by throwing everything at the wall and seeing what sticks.

This season is over for the Knicks, but the lineup has been revamped with a group of young guys. On Saturday night against the Celtics, Hornacek ran a few interesting lineups with these pieces. The most intriguing of the bunch was a lineup of Frankie, Burke, and Damyean Dotson on the floor at the same time. He ran an iteration of this again this time with Tim Hardaway Jr. in over Mudiay.

I don’t want to read too much into anything, but the utilization of Frank in those lineups is worth keeping tabs on. In those lineups Frank was technically at the three. Thinking about this, that picture of Frank with Oak popped into my head. Then I remembered Frank is still growing. I’m not suggesting Frank move all the way up to the three permanently, but his ability to guard wings can unlock a combination of lineups that gave Hornacek his sole success as a head coach in Phoenix.

How about Trey Burke’s last two games? Coming off the bench, Burke has scored 26 points in his last two games. Even better is that he got those 26 on efficient shooting (over 50 percent from the floor in both instances). I believe Burke has become a serious contender to be the sixth man moving forward. He fills in the holes of both Frank and Mudiay’s games, which makes him an ideal bench piece.

He possesses the touch on his jumper Mudiay simply does not have. He is swift both in foot and judgement, which Frank has yet to grasp. He seems to have figured out where he is most effective on the floor, and scores effectively from those spots. Sure, he can still dish the ball, but if he is going to have a job it will be because he can pour in the points. If nothing else comes from this second half, Burke’s rebirth has been fun to watch.

Matchup of the Night: Emmanuel Mudiay vs. Stephen Curry

Life as a starting point guard in the NBA is unforgiving. On Saturday night, Mudiay found that out the hard way as Kyrie Irving had his way with him in the third quarter. Kyrie was relatively quiet in the first half, but once he started to impose his will, Mudiay was helpless to stop him. Tonight, he draws another impressive talent with similar tendencies. Steph Curry is one of the few guys who can be ice cold all game, but suddenly burst into flames for a seven-minute stretch.

Madison Square Garden is where Stephen Curry became Steph Curry. That night at the Garden when he dropped 54 was his arrival. He, like many other superstars, enjoys playing here and can put on a show at the drop of a hat. Mudiay draws the tough assignment of preventing a Curry meteor strike.

For Mudiay to have a puncher’s chance he will have to rely on his one advantage—athleticism. Mudiay should look to drive every chance he gets on offense. He is at his best when he is doing that. If he can force Curry to defend him going to the rack and utilizes his physicality on defense, maybe he can get the sharpshooter off his game. But if he settles for jumpers on offense and gives Curry space on defense, all hell can break loose.

The talent is there for Mudiay as is the frustration. He reminds me a little of J.R. in that he knows what he is really good at, yet doesn’t do it all the time. Unlike J.R., Mudiay does not have a fraction of the jumper. When he settles, the defense has already won. His mission tonight should be to attack relentlessly and let the rest take care of itself.