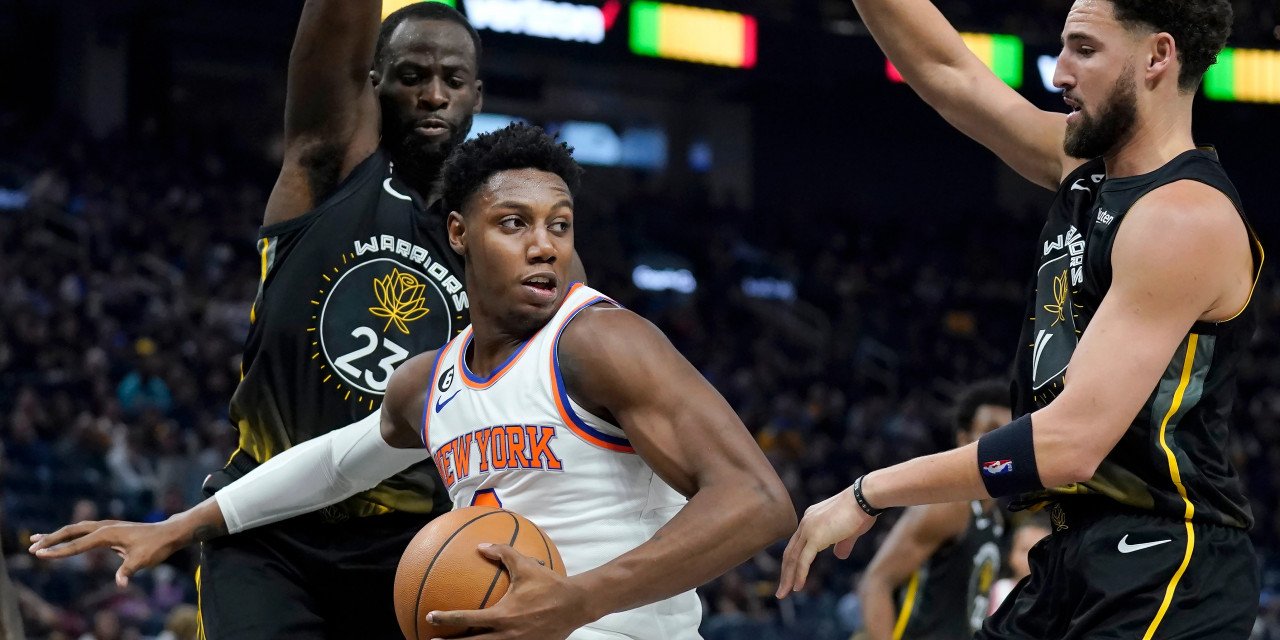 The Knicks struggled to keep up with Steph Curry and the Warriors’ offense, earning their first loss on their current five-game road trip.

The New York Knicks (8-8) fell to the Golden State Warriors (7-9) by a final score of 111 to 101. Stephen Curry was one of three Warriors who scored 20 points or more, finishing with 24 points, 10 assists, and six rebounds for Golden State.

For the Knicks, Julius Randle scored 20 points and grabbed seven rebounds in a losing effort. With the loss, the Knicks move to 2-1 on their five-game road trip.

The Warriors got cooking from beyond the arc early, knocking down eighteen threes. It doesn’t help that the Knicks are one of the worst teams defending the arc, and with the three-point-oriented offense in Golden State, it was a recipe for disaster. The Knicks shot thirty-five percent from the field in a lackluster offensive showing. New York inched back into the game by the end, but every time the Knicks got within single digits, the Warriors closed the door. Key stat of the night to show Golden State’s offensive dominance: The warriors doubled up the Knicks in assists with 32 to New York’s 16.

Randle hits the three to cut the Warriors lead to single digits pic.twitter.com/hlV3MwzB2K

The Knicks have not been perfect but continue to scrap to keep games close until the fourth quarter. In the end, the Knicks break down and hope someone gets hot to take them over the finish line. Julius Randle, often up to the task in late games, played well tonight, but his efforts came mostly in the first half. Without much shot-making outside of Randle, the Knicks were left looking for answers.

After starting the road trip off right with two wins, the Knicks looked like they found some footing offensively against Utah and Denver, but more importantly, New York got back to their defensive roots. But zoom out on these two recent wins and the picture becomes more clear. New York had just enough to beat the nuggets without two of their top four, missing Aaron Gordon (Illness) and Nikola Jokic (Health and Safety protocols). And if not for a Jalen Brunson masterclass in the fourth against Utah, the Knicks would’ve been clowned for letting Kelly Olynyk cook them for twenty-seven points.

What are we doing pic.twitter.com/OYoBtklQPF

This Warriors game was a sobering wake-up call to show how far the gap is between high-level basketball and where the Knicks are currently. Things are definitely trending in the right direction, but New York has a long way to go before earning a spot at the big kid’s table.

The Cam fam is eating well. Knicks’ fourth-year man is continuing to prove he belongs not only in the rotation, but the starting lineup for a group that needs defense on the wing. Although Reddish (11 points, two rebounds) is only shooting thirty-three percent from three, that’s still one of the higher percentages on the team. Reddish excels in transition and is slowly improving on his half-court offense. If Reddish can become a more reliable shooter that would really help New York open up the offense.

With recent rumors that the Knicks are interested in moving off Derrick Rose and Immanuel Quickley, one has to wonder: why now? Why rush to offload the best guards we’ve had in a long time? The season is long and the Knicks’ backcourt depth is, for once, good. Fun Fact: the last two starting point guards for the Knicks on opening night, Kemba Walker and Elfrid Payton are not on an NBA roster right now.

Having all this talent on the roster means sacrifice. Rose has been taking the bulk of that burden, as his minutes have almost halved from last year to thirteen a game. DRose can still contribute to a lot of teams, but the problem is he and Quickley overlap too much in their impact and Quickley has been the better option so far.

With all the IQ trade talk bubbling, we revisit our guys talking about it on last weeks episode of TKWeekly: pic.twitter.com/gdkmGkftaU

The Knicks travel to Footprint Center in Phoenix, Arizona to face the Phoenix Suns (9-6) on Sunday, November 20th. Tipoff is set for 3:30 p.m.