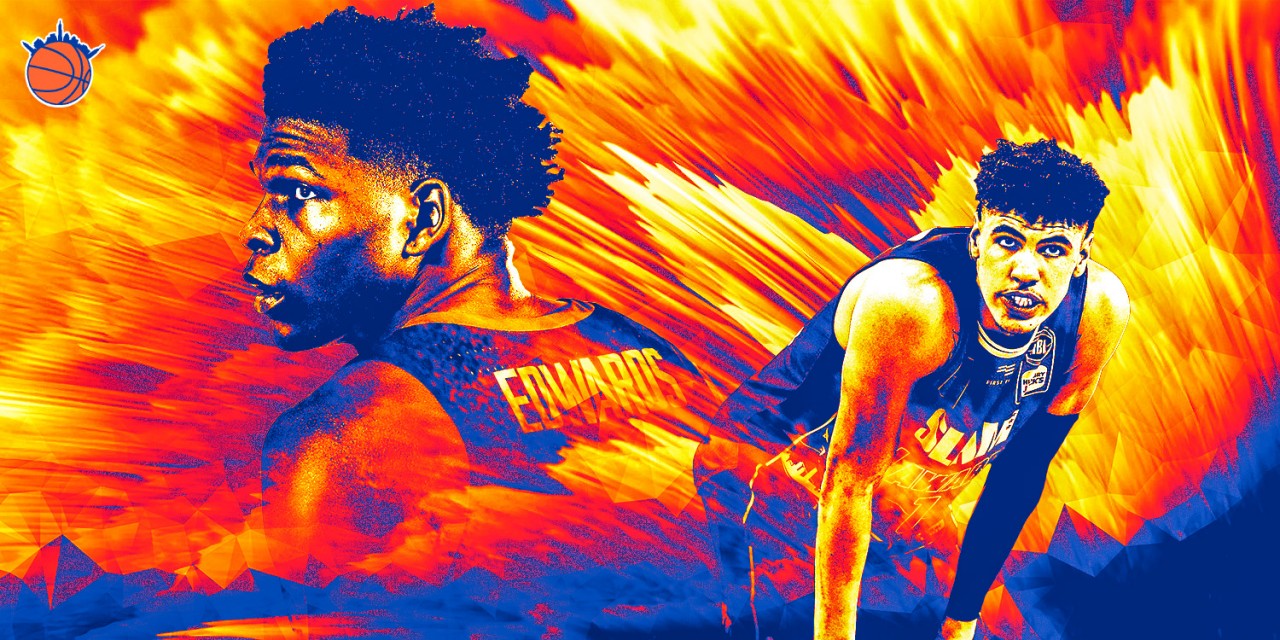 The Knicks have the worst record in the NBA and the best odds to win the lottery. Which draft prospects should you be keeping an eye on?

Through 23 games, the New York Knicks (4-20) have posted the worst record in the NBA while playing an apathetic brand of basketball. The Knicks have had some awful stretches before, but this one might be the most atrocious in recent memory.

With this season undeniably going nowhere, we find ourselves looking ahead yet again to the draft lottery—not something you want to be doing in December.

Barring an unforeseen turnaround, New York will likely be selecting in at least the top five of the 2020 NBA Draft, looking to secure another young phenom to pair with last year’s third overall selection R.J. Barrett.

With no big free agents on the horizon coming here anytime soon, New York is in desperate need of young star power to jump start the renaissance of quality Knicks basketball that the fans have been after for decades. Luckily there are some stud prospects headlining this draft class who could bring much needed juice and credibility back to Madison Square Garden.

Easily the most widely discussed 2020 draft prospect, LaMelo Ball has gone from being known mostly as “Lonzo’s little brother” to arguably the most talented player entering the NBA next season, making a case to be the number one overall selection next June.

The 6-8 guard/forward originally played at Chino Hills High School in California and Spire Institute in Ohio before dabbling in the overseas professional basketball world, playing in Lithuania with his brother LiAngelo. Currently, the 18-year-old Ball is playing for the Illawarra Hawks in the NBL in Australia, where he’s turning heads with tremendous shooting and passing ability.

We’ve been hearing about LaMelo consistently since he scored 92 points in a high school game a few years back, and the hype train has only picked up momentum since then.

With all the noise surrounding Ball, many skeptics wondered if he was just a flash in the pan internet sensation who would eventually fizzle out. To Ball’s credit, he has developed into an excellent prospect and established himself as a lethal offensive weapon.

Fit as a Knick: Ball is flashy and plays the game with a unique confidence and swagger. He isn’t afraid to dance around the perimeter with the ball, pull up from ridiculously long range, or embarrass a defender with a poster dunk.

New York City would be a suitable destination for Ball, both on and off the court. No city aside from Los Angeles markets their stars better than the Big Apple, and the young man’s personality combined with being in the media capital of the world would make him a fan favorite and overnight sensation. In terms of relevance, Ball’s arrival would move the needle for the Knicks, who have become largely uninteresting.

On the court, Ball would provide the Knicks with reliable perimeter playmaking, although he hasn’t proven himself a reliable outside shooting yet (he hasn’t shot above 30% from deep overseas). This season, the Knicks rank in the bottom half of the league in three-point percentage and three-pointers made per game yet again this season, per NBA Stats. With the NBA becoming a run-and-gun league, Ball’s playmaking ability, fast-paced style of play, and vision would be a welcome addition to a Knicks team that hasn’t adapted to the new NBA.

Son of former Knick Greg Anthony, Cole Anthony is one of the most exciting prospects this year. The North Carolina freshman has put the college basketball world on notice in the early season, averaging 19.1 points, 6.3 rebounds and 3.6 assists and 1.9 steals per game, per ESPN Stats.

Anthony has been the best player on a struggling Tar Heels team and has shown exceptional leadership from the point guard position. The 6-3 guard is the whole package: a great handle, a strong shooter from the mid-range and perimeter, and a powerful Russell Westbrook–esque finisher with great court vision and elite quickness.

Fit as a Knick: New York’s point guard rotation this season has been quite the circus. Dennis Smith Jr. has struggled to get significant opportunities, Elfrid Payton is a backup at best, and Frank Ntilikina, despite his plus defense, is an anemic offensive player. It’s been so hectic, R.J. Barrett has had to run the point at times this year.

Anthony would not only fill a hole on the Knicks but would reinvigorate the offense with his quickness, explosiveness, and combo guard ability.

Off the court, Anthony has a deep connection to New York. He lived in Manhattan for many years, dating back to his early childhood. He attended Archbishop Molloy School in Queens before transferring to Oak Hill Academy for his senior season. Prior to enrolling in UNC, the 19-year-old frequently trained in New York with famous trainer Chris Brickley and participated in summer runs with NBA stars.

Anthony’s willingness to work on his craft also says a lot about his hunger to be great. The Big Apple would be an ideal fit for him.

The Atlanta native is a man amongst boys. At 6-foot-5, 225 pounds, Edwards has an NBA-ready body and will be a top five pick in the upcoming draft if he decides to declare.

The Georgia Bulldog guard is an elite athlete who has physically filled out well beyond his years. Edwards is second in the SEC in scoring at 20.6 points per game. He’s a natural scorer who can get buckets from behind the arc and finish strong at the rim. Defensively, Edwards is a plus; consistently in the proper position when guarding, contesting and blocking a lot of shots for someone his height.

Edwards is potentially the most NBA-ready player in the draft, and best equipped to contribute immediately at the next level—a desirable commodity for teams like the Knicks, who could use more shooting and athleticism from the backcourt.

Fit as a Knick: The Knicks aren’t a great shooting team. Edwards would help in that regard and be able to contribute quickly like we saw from R.J. Barrett earlier this season.

The 19-year-old’s active, physical defense would be a welcome addition a Knicks team that is frequently torched from the perimeter. Pairing Edwards, who has the potential to be elite on both ends of the floor, with Ntilikina would be a very promising backcourt.

Yes, Edwards doesn’t have the name recognition as a LaMelo Ball or Cole Anthony, but is just as good an offensive initiator as those guys, with a super high ceiling as well.

Wiseman, after violating NCAA rules, is currently ineligible and not playing for the Memphis Tigers. Wiseman is designated to return in January, and wow is he fun to watch.

Wiseman was the top ranked recruit for the ESPN 100 Class of 2019 and ultimately decided to play for former Knick Penny Hardaway at Memphis. In the three games before his 12 game suspension, Wiseman showed the world why he was rated so high coming out of high school. The 7-foot-1 center shot 76.9% from the field in his brief run and averaged a double-double with 19.7 points and 10.7 rebounds per game, per ESPN Stats.

Despite being on the shelf, Wiseman is still regarded as a top prospect in the 2020 NBA Draft. Not your typical clunky, non-athletic big man, he moves like a guard and finishes with soft touch around the rim. The Nashville native has a back-to-the-basket game and a hook shot in his arsenal, and doesn’t wander out to the perimeter or settle for jumpers.

Wiseman, despite not having a refined game from outside the paint, is a threat to knock down an occasional three and has the awareness to find teammates if his shot is not there. Defensively, Wiseman uses his size to block shots and controls his body to avoid foul trouble.

Fit as a Knick: Despite Wiseman’s immense talent, his fit as a Knick is questionable. With Mitchell Robinson anchoring down the center position and Julius Randle here on a three-year deal, Robinson and Randle are likely mainstays on the roster for the next few years. There isn’t a gaping hole down low, and New York’s bigger area of need is the backcourt.

The three aforementioned players definitely are going to make more of an impact from the perimeter than Wiseman likely ever will. Adding another seven-footer to the roster would create an unnecessary logjam down low.

R.J. Hampton opted to go from high school to the professional ranks, playing for the New Zealand Breakers of the NBL. Hampton wanted to “live like a pro and to play with grown men and not have to juggle books and basketball” via the New York Post.

Hampton’s unconventional route to the NBA has not slowed him down one bit; he is widely considered one of the five best players entering the 2020 NBA Draft. The 6-5 Hampton is a great combo guard with excellent handles, strong decision-making abilities with and without the ball, and great range.

The Texas native is a natural scorer and has an NBA frame, similar to Anthony Edwards. In addition to his offensive skills, Hampton buckles down on defense consistently and frequently finds himself in passing lanes and in transition off of turnovers.

Fit as a Knick: The Knicks need better guard play, and what better way to fill that need than with a guy who can play both the point guard and shooting guard? Hampton’s skill set allows him to potentially excel at both positions as an offensive catalyst and a threat to score every time the ball is in his hands.

One hesitation about Hampton as a Knick is his occasional offensive inefficiency. New York has struggled with inconsistencies on the offensive end for a long time, and adding a volume guy who could shoot you out of a game won’t help.

That said, the Knicks could potentially have their franchise lined up with a double R.J. backcourt.