We Just Don’t Know What Obi Toppin Is Yet 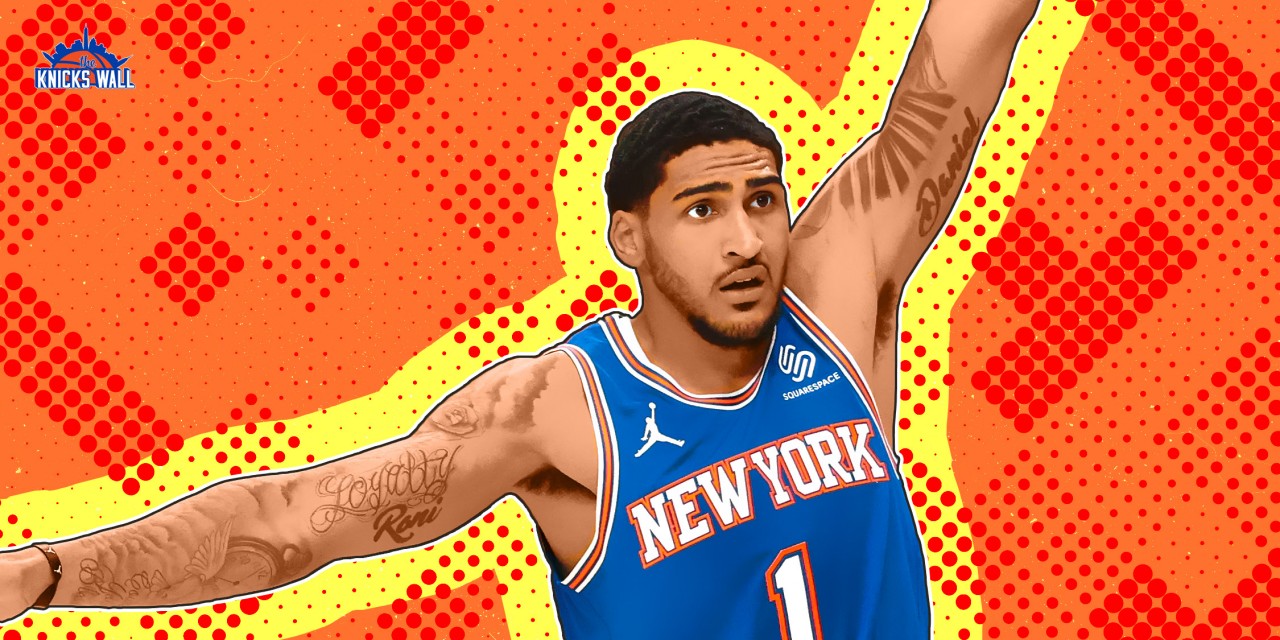 Troubled first by injury and now by minutes and defense, Knicks rookie forward Obi Toppin is far from a polished product on the hardwood.

If we were to boil down the first half of the 2020–21 season for the New York Knicks so far, it would be the blossoming of the team’s young talent. Second-year wing R.J. Barrett has developed into an effective, all-around player while Mitchell Robinson is firmly entrenching himself as the team’s starting center. Rookie Immanuel Quickley’s recent surge as people considering him as not only a solid young piece for now but the team’s point guard of the future.

But while some players have started strong, others have struggled. Kevin Knox has recently fallen out of the rotation and fans eagerly await the day Frank Ntilikina returns and overtakes Elfrid Payton in the rotation. The biggest name on the list is 2020 eighth overall pick, Obi Toppin. After an early-season injury held Toppin for the team’s first 13 games, Toppin has come back and largely stayed tethered to the bench behind Julius Randle.

However, his numbers haven’t inspired confidence when he has reached the floor—156 minutes played, 4.6 points and 2.5 rebounds per game, and a woeful 51.8 True Shooting percentage. The slow start to the former Dayton Flyer’s career has even spawned some Knicks fans to call him a “bust,” a take that has only intensified while watching fellow rookies Sacramento’s Tyrese Haliburton and San Antonio’s Devin Vassell in recent weeks.

My call is that Toppin should be given more time because we’re not quite sure what he is yet.

Not only do we not know, but Toppin hasn’t received the extended minutes likely someone like Quickley has. The fellow 2020 first-round pick has taken his minutes and ran with them while Toppin has not been afforded the same luxury due to the All-Star-level play of Julius Randle. Between Randle and two other big men in front of him—Mitchell Robinson and Nerlens Noel—Toppin has been relegated to a fourth big-man role, whose room for error is razor-thin.

Through his small sample, there have been some positives from his game. Currently, Toppin sports 2.0 assists per 36 minutes, alluding to his solid passing ability. Not only is he a good standalone passer, but he’s good at making passing plays on the move. I’m also a fan of his offensive awareness on the floor, often drifting to the corners or behind the break to provide maximum spacing. He might not be a good three-point shooter yet, but the college numbers give me hope he may one day be a fine shooter.

This play is a small idea of Toppin’s awareness, as he is missed on a transition dunk by Austin Rivers, so instead of remaining in the paint, he shifts to the corner to receive a pass from Payton. The shot was a miss, but look at the floor as Toppin shoots. Not only does he have an easy look for himself, but also the ability to pop a pass out to Rivers across the floor for an easy look as well.

Those two abilities, shooting and passing, are key for Obi Toppin because they would make him a dangerous player in the pick-and-roll. He’s not Draymond Green, but one thing that made Green dangerous in the 1-5 pick-and-roll with Stephen Curry was that he could roll to the rim and finish, or, had the awareness to find the open man if someone came to help. Toppin, in time, could be someone who can do similar things with Quickley.

His negatives, though, could be what keeps him off the floor.

For starters, as a rookie, Toppin has to be a bit more assertive on the floor. He doesn’t call or demand the ball, or even go to the glass aggressively—all of which need to change and fast for him to survive in the NBA. Outside of one strong dunk against the Celtics, Toppin has largely played within the game, which is understandable as a rookie, but at times, it sees the game pass him by. A bit more aggression could go a long way for Toppin, even if it’s something as simple as setting the screen before being called.

The second is his defense. Known as a poor defender in college, Toppin’s play on that side of the ball has only continued to lag behind his offense. Despite flashing the athletic ability on offense, Toppin doesn’t seem to have any on defense outside of shot-blocking. He lacks the foot speed to defend on the perimeter and doesn’t possess the size you want in a drop center—effectively putting him in no-man’s-land as a defender.

He also struggles in the post. Strength will have to be one of the areas of improvement heading into year two because he can’t hold his own against good post players in the league, and he isn’t quite strong enough to impose his will on the other end. One play that remains embedded into my head is a post play against the Sacramento Kings last week where Toppin simply couldn’t establish a position against Buddy Hield. Hield stonewalled him, Toppin had to pass out. Hield is 6-foot-6 and not exactly known as a defender in the league.

Two plays below also stand out:

In the first clip, Toppin has the mismatch, but can’t get any closer to the rim and has to settle for a turnaround jumper in the lane. The second video is simple, Toppin drives into Harry Giles and has no post moves. He goes up, no pump fake, and Giles blocks the shot. For Toppin to be an effective big man who can impact the game, he’ll have to be able to use his athleticism for quick post finishes.

So while I remain bullish on Toppin’s offensive abilities, the defensive issues and lack of post strength could hurt him in the long run. At some point, Toppin will find his role on offense and become more comfortable demanding the ball in his spots. The defense, however, is a big issue because the question will quickly shift from “can he become a close-to-neutral defender” to “can the Knicks find the proper defenders to surround Toppin to keep him on the floor?” if he can’t turn it around.

With head coach Tom Thibodeau and assistants Darren Erman and Kenny Payne available, working out Toppin’s defensive issues remain a high priority to get the most out of their top 10 selection, otherwise, he won’t get many minutes in Thibodeau’s rotation.

The road ahead and closing thoughts on Toppin

One of the early criticisms of the Thibodeau era is his constant lean on one lineup—Elfrid Payton, Reggie Bullock, R.J. Barrett, Julius Randle, and Mitchell Robinson. The lineup has been effective, but it ultimately hurts the Knicks’ lineup data as we try to figure out which combination of players work on the floor. That and fans seem to be ready to revolt over the constant Payton starts over Quickley.

The other area for me is the Quickley-Barrett-Toppin trio. Per PBP stats, the trio has a Net Rating of 43.8 in 14 minutes.

The sample size is microscopic, but the ideology works for me. Toppin gets two ball-handlers around him who can diligently run pick-and-roll with the forward. Barrett has improved as a rim scorer this year while Quickley is, well, quickly, becoming infamous for his lethal floater in the lane. Both are weapons defenses will have to prepare for, and both give Toppin a chance to be effective, whether it be popping for threes or rolling to the rim for a remarkable finish. The Knicks will have to find the proper two players to fit around that, but this remains a trio I want to see get extended game time.

Until then, Obi Toppin remains a role player, awaiting his number to be called on a nightly basis. Through all of this, one question remains—how did the Knicks hire a head coach with a defensive identity and use a premium pick on a player who couldn’t defend? Not only that, but the archetype is an easy find. The Knicks already had a similar player in Randle and Atlanta’s John Collins is going to be available as a restricted free agent this summer.

My personal criticism remains Toppin’s player archetype is an easier find compared to a 3-and-D wing player like Vassell or a point guard with solid shooting and the ability to get to the rim, like New Orleans’ Kira Lewis Jr.—two players who I ultimately would’ve selected over Toppin at that time.

Still, I’m not totally out on Toppin because of the offensive skills and the fact he’s only 150 minutes into his NBA career. There’s still time for him to be an effective big man who can create havoc as a passer and put pressure on defenses as a rim runner. Find the right defensive combination to work with him, pair him with Robinson to serve as a last line of defense behind him and Toppin could offer the Knicks positive value on the offensive side of the ball.

The defense, however, will have to improve for him to step on the floor for Thibodeau and if the early returns show anything, it’s that Toppin has some ways to go to be a consistent option in Thibodeau’s rotation.

For now, I’ll hold on to the Obi Toppin stock.