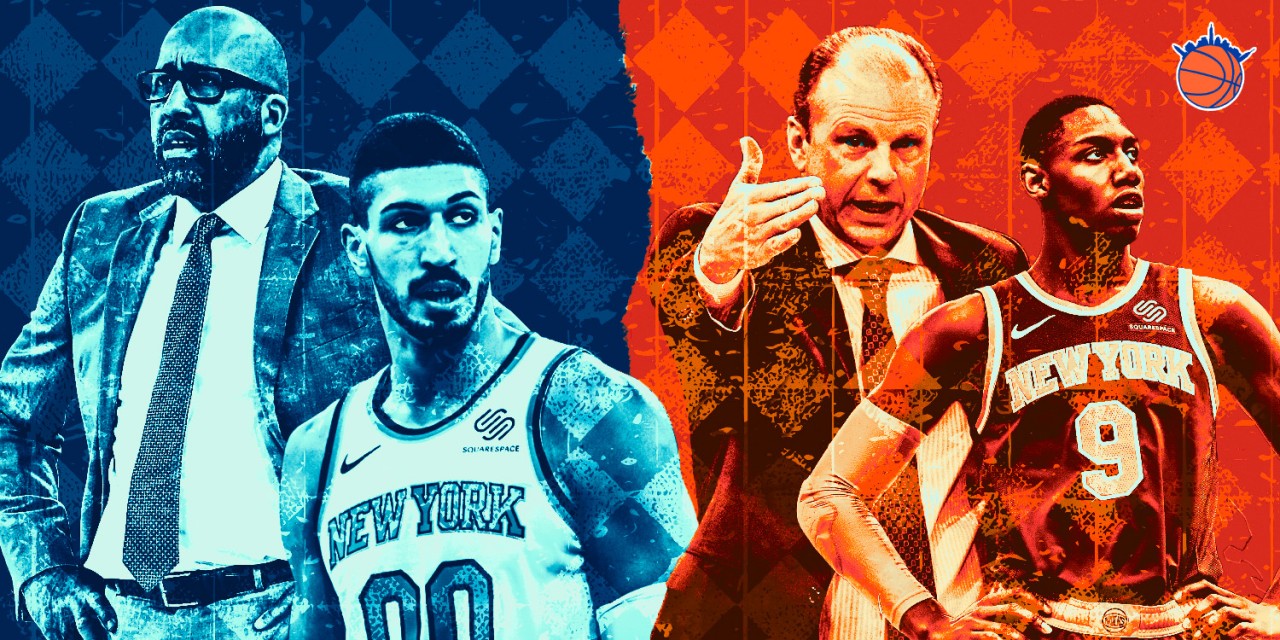 The Knicks have struggled to develop their young players, and it goes without saying that 2020 will be a year determined to improve in that department.

The 2018–19 New York Knicks were a dumpster fire on the basketball court. The start of the 2019–20 season made it appear as though not much had changed.

Since Mike Miller has taken over as head coach, things have looked up. Miller is 5-6 in his first 11 games. Still, fans of the Knicks know that the issues plaguing the organization go far deeper than deciding who the head coach is. As we enter 2020, it is worth examining what is different from last year, and what we can learn from the Knicks tied-for-worst season in franchise history.

In 2018–19, the Knicks only regressed as an organization. By preparing only for the summer of 2019, not only was the on-court product hot garbage, but the younger players (not sure I would call any player from the 2018–19 team a foundational piece) were not given the proper setting to grow and develop as players.

Of the top 10 players on the 2018–19 Knicks in total field goals attempted, per Basketball-Reference, six did not return to the Knicks. While roster turnover is increasingly common in the NBA nowadays, this does not mean underwhelming players who are bound to bolt the following summer need to be featured as focal points of the offense. By overvaluing cap flexibility, many players on the Knicks’ roster are not cut out for the long haul with the team. Roster turnover has been challenging for the Knicks, but it is not the sole issue plaguing the team. Players need to have defined roles, and those roles need to complement players’ skills. This format was not followed in the 2018–19 season.

I am still not unconvinced that last year might’ve just been Emmanuel Mudiay performing shock therapy on me:

The main problem last year was that guys were not used in a realistic NBA context. Emmanuel Mudiay averaged 12.5 shots per game last year, now he averages fewer than six.

This same contextual issue hindered the progress of the team’s returning younger players, and is detrimental to the long-term outlook of the team. Dennis Smith Jr. and Kevin Knox were given free rein to launch from everywhere and anywhere and have next to no progress to show for it. While with the Knicks last season, Smith Jr. shot 14 field goals per game on 41% shooting from the field and 29% from three. YUCK. Instead of giving him realistic NBA reps for his role, his chuckfest from last season has led to regression in all facets of his offensive game, he can’t crack the rotation, and is likely on his way out of New York.

Knox, meanwhile, led the team in total field goals attempted last year, with over 170 more than the next highest player, on 37% shooting from the field and 34% from three. This year, his percentages have largely remained the same, he has shown flashes of mere competence on defense but is largely inconsistent, and he has added no real offensive facets to his game. It amazes me that his go-to moves are still either a pull-up, contested jumper or drive really hard to the right and throw it up in the air.

Frank Ntilikina was not given nearly enough opportunity last year, highlighted by the fact that he did not finish in the top 10 of the team on field goals attempted. He has been able to positively impact games every once in a while; however, he still seems scared to operate outside of the extremely narrow role he has boxed himself into. These guys are young, and the ink on their stories with the Knicks might not yet be dry, but there is no question they were deployed ineffectively last year.

There is no point in bashing the past unless it is in an attempt to prevent history from repeating itself. The Knicks can use the only substantially positive development from last season as a template for development in the future. Despite being valued the least at draft time, Mitchell Robinson is the most promising young talent from last year’s team because he played in a role that made sense last year (and because he is insanely athletic and plays with unmatched energy). By getting reps as a rim runner, Robinson has already established himself as one of the NBA’s top screen setters by points per possession.

How many times have we seen him do something similar to that this year? His game is by no means perfect, but his role is established, and now he can work on adding new facets (better contact on screens, dribble hand-offs, working from the dunker spot, etc.) to his game.

This is what the Knicks must learn from last year: use the young players in realistic contexts so that they can hone the proper skills. The Knicks must double down on this philosophy for R.J. Barrett. Continue to play Barrett in important minutes with starting caliber players and get him reps in situations that will be able to translate into the future. There is merit in guiding Barrett towards contributing to winning basketball. More so than Knox, Barrett has proven that he can contribute defensively, and he rebounds aggressively. He is willing to take a backseat while playing with Morris and Randle. Despite being a below average shooter so far, he knows his role sometimes amounts to spacing out for others. Watch here as he knocks down an important corner three:

It is not even a question that Barrett is staying put in the corner on that play. This allows Barrett to understand the importance of improving his shooting if he wants to be a part of winning teams. He is, however, a multi-faceted player. Something I’d like to see more of: R.J. attacking in four-out sets rather than slashing when there are two players on the block. Watch what he can do with proper spacing:

This is not to say that the future of the Knicks offense must rely on Barrett’s ability as a number one option. Due to poor roster construction, Barrett only gets to create so often with proper shooting around him. It will likely hinder his development as a finisher and playmaker. Deploying him in lineups modeled around winning basketball would help him develop. As we learned from Knox and Smith Jr., forcing up shots against NBA teams does not immediately translate to positive growth.

By changing the way that Knicks deal with young players, the organization can finally take the steps it tried to skip last year. The New York Knicks rebuild from the ground-up you knew had to come has arrived; it just arrived a year later than you expected.