What Can All Those Assets Buy Leon Rose and the Knicks? 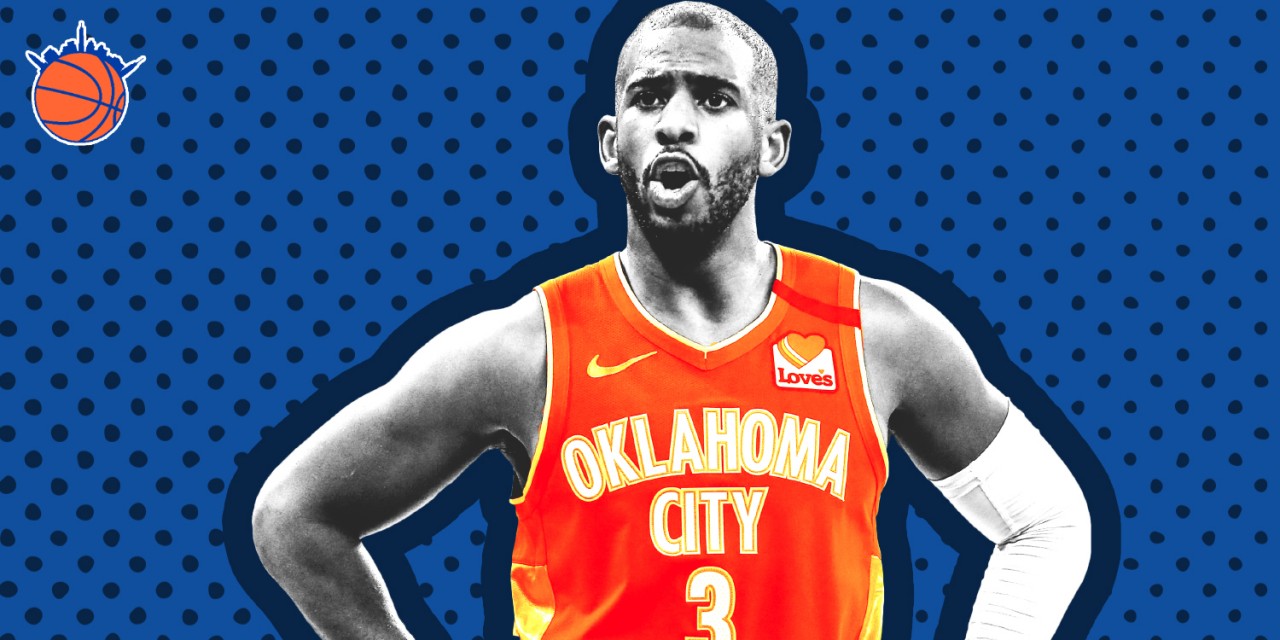 It’s undeniable that, despite a rocky talent pool, the Knicks have a boat load of draft picks. New team president Leon Rose could cash in.


As the NBA season sits in limbo, and society stands still, it is safe to assume there will be no more New York Knicks basketball. The Knicks finished 21-45,  a four-win improvement on last year’s tanktastic season, and good for the sixth-worst record in the league. They have a 9.0% chance to get the top pick but can also slip down to ninth overall. Falling to 10 is technically possible, a 0.1% chance, but the hoops gods have already proven to be cruel to the Knicks so nothing should be ruled out, no matter how slim the odds.

That’s the bad news. The good news is the Knicks have a semblance of a foundation to build on and a slew of assets. Flexibility was a tired talking point used by Steve Mills and Scott Perry this season—and ironically the one area in which the team did phenomenally.

The Knicks own all their picks, still have two first-rounders from the Mavericks, and added another first-rounder in the Marcus Morris trade, giving the team a total of seven first-round picks over the next four drafts. These picks could be used to infuse a bunch of young players to continue the rebuild.

Another option could be to package this newfound embarrassment of riches to put together trade packages. Knicks fans have been queasy to get involved in trades because often times New York has had to include their whole roster to pull off a blockbuster (e.g. Carmelo Anthony deal).

Perry has done a good job preventing roster-gutting to make a big trade—the team has enough draft picks to limit the amount of players in a potential blockbuster and enough picks to make marginal but necessary deals. He has set new team president Leon Rose on a good situation by Knick standards.

The team remains a bottom-feeder, but there is no denying the talent of Mitchell Robinson, R.J. Barrett, and Frank Ntilikina. Kevin Knox is still just 20 years old, and Ignas Brazdeikis is no slouch either. There is talent on this roster but no alpha to piece everything together.

This role could work itself out organically with a draft pick, but Rose will likely want to make a splash of some sorts—whether by adding a veteran to mentor the neophytes or by bringing in a star to accelerate the rebuild.

Who are some players Rose could have his eye on? Here are a few possibilities that come to mind, from most realistic to coke dreaming.

Prior to the suspension of the season there were already reports of a potential Chris Paul to New York deal. It makes sense: Rose is the longtime agent of CP3, and the Knicks have yet to address the point guard position. Paul is long in the tooth, true, but dig deeper, and trading for the future Hall of Famer has more appeal than meets the eye.

For starters, Paul should come at a relatively cheap price. He was fantastic for the Thunder this season, even returning to the All-Star Game. Having said that, it’s hard for a team to justify paying the soon-to-be 35-year-old guard when Shai Gilgeous-Alexander is already on the roster. Paul is set to make $41 million next season and has a $44 million player option the season after. If the Thunder traded James Harden for a used car salesman and Jeremy Lamb in fear of being over the luxury tax, it is likely they want to shed Paul as soon as possible.

The Knicks have enough space to absorb that gargantuan contract, and could possibly rid themselves of Julius Randle as part of the compensation. It’s important to reiterate that the Knicks should approach this deal as the facilitator more than a buyer; by doing so they should be compensated, instead of parting with any legitimate assets.

Moving Randle in a deal would free the Knicks up to target a forward in the draft, of which there are a few options worth trading up from 27 (the Morris pick) for like Washington’s Isaiah Stewart, or to be more ambitious, Dayton’s Obi Toppin or USC’s Onyeka Okognwu.

Paul’s role in New York could look like an amplified version of what Taj Gibson’s was this season. This year’s draft has been deemed bad, which may be true, yet there are several lead-guard options available when the Knicks pick. Paul mentoring whoever that pick is (hopefully LaMelo Ball or Killian Hayes) would be ideal, akin to matching a padawan with Mace Windu.

The next season can belong to Paul as he mentors the rookie, as well as young players on the roster such as Ntilikina and Barrett. The only real hold up would be Paul himself—how does he want to spend his latter years? Andre Iguadola set a dangerous precedent by choosing not to play for the Grizzlies.

Whatever Paul’s feelings are, parting with $40 million is a tough call. There have been rumors that Rose could be interested in bringing back Carmelo Anthony—would that appeal to Paul? The hope is that Rose and Paul would be on the same page, and if other moves are made to appease Paul, he could spend at least one season in orange and blue.

The fallout of the Jazz fiasco surrounding the coronavirus outbreak is the most interesting storyline no one is talking about. Rudy Gobert was a fool, and did apologize for it. That doesn’t seem to be good enough for Donovan Mitchell, who along with former Knick Emmanuel Mudiay were the two Jazz players to contract the virus along with Gobert.

During an interview with Good Morning America, Mitchell gave an interesting answer when asked about Gobert. He said he hadn’t been in contact and noted it took a while to “cool off.” This lends credence to the reported rift between Mitchell and Gobert.

Mitchell checks off every box for a Knicks trade target: he’s a native New Yorker, was someone they should have drafted, and he also happens to be out of their league. But thanks to Gobert, there is a path for Mitchell asking out of Utah. These are the type of opportunities for which Perry and Mills droned on about being flexible.

A package for Mitchell would have to be large, and include in the neighborhood of four first-round picks, possibly more if the Knicks stand firm on keeping Barrett or Ntilikina. A deal of both this year’s first-rounders, both Mavericks pick and another unprotected first, with Knox and Dennis Smith Jr. works on paper, but would only appeal if the Knicks move up in the draft lottery—otherwise Barrett or Ntilikina would have to be included in a deal.

Whatever the Knicks concoct would have to entice the Jazz enough to not move Gobert instead of Mitchell, and still keep the core Mitchell would join. If possible to pull off, Mitchell would fit seamlessly into the core of Ntilikina, Barrett and Robinson. There is a roadmap to accomplishing this; it will just cost the foreseeable future. Is Mitchell worth that type of price tag? Rose will have to decide.

There is no reason Devin Booker should be remotely available. He is 23 years old and already a star. Adding Booker would give the Knicks their best scorer since Carmelo Anthony, only Booker has not hit his peak yet. The key difference is that Booker wouldn’t be joining a maxed-out team, like Anthony when he joined Amar’e Stoudemire, and eventually Tyson Chandler.

Booker’s aesthetically pleasing playing style would put butts in the seats, and he has proven he can consistently average 20-plus a night; his average has not dipped below 20 since he became a starter in his second season. Swindling a surefire star from Phoenix isn’t as hard as it looks—remember, these are the Suns that had Jason Kidd, Steve Nash, and Amar’e Stoudemire, and won absolutely nothing. If Booker decides he has had enough, the Suns could have no choice but to unload him while they can still get value.

Booker is locked up through the 2023–24 season, maxing out at around $36 million per year. The Knicks could wait, get their stuff together, and make a run at Booker when he hits the open market at 27 years old, or they can get him in the building now in hopes of attracting other players to New York.

The whole point of bringing Rose, Steve Stoute, and (unofficially) Worldwide Wes is to make the Knicks a free agent destination. The only real way to do that is to land a star player. To get Booker would cost at least five of the seven first-round picks, plus some mix of players. For Booker, no one should be deemed untouchable, which makes it a tougher deal to make.

One could easily argue that Booker hasn’t won anything to justify such a large deal, to which I say: his talent trumps any concerns. Having Booker in NYC is much different than Phoenix. If New York can tout more than its media market, it could be enough to have free agents flocking.

These are just a few of the possibilities at Rose’s disposal as he takes over. Steve Mills did a lot of bad things in his time in New York, but leaving the team in its current state isn’t one of them. The Knicks are on the right track, and Rose has the ability to hit the gas if he pleases. That’s a start.