What Can We Learn From Summer League? 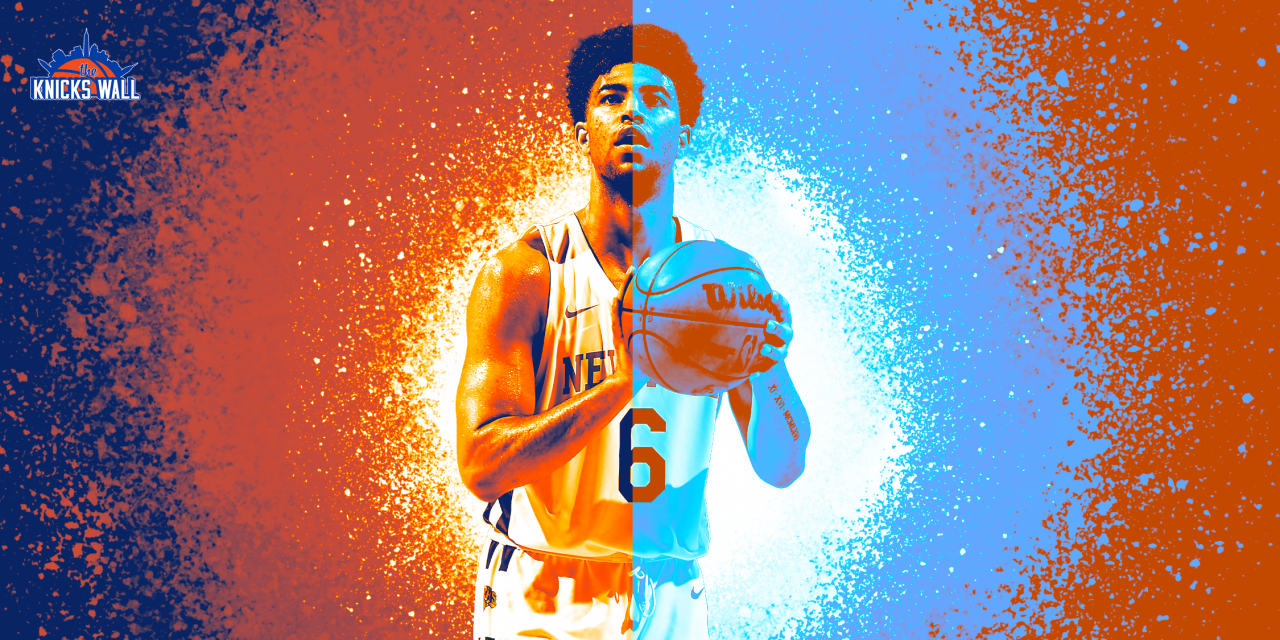 Las Vegas is a city of false hope, but there are oases of predictive success amongst the mirages of past Summer League standout performances.

This summer, longtime suffering Knicks fans coming off a disappointing season were offered a reprieve, a mirage in the distance of what could possibly be with the success of a grit and grind Summer League team in Las Vegas. The Knicks Summer League successes had even more attention brought to them because of the rampant trade rumors surrounding some of the stars of the team.

With the excitement blossoming,  Knicks fans worldwide basked in the glory of the Summer League championship loss and the upside of the young players in the organization when actually given a chance to play. From highly touted first-round picks such as Quentin Grimes, to undrafted and unheralded role players like Feron Hunt, fans alike look for the potential every July in the desert.

That is the question that fans of every team ask themselves during NBA twitter’s favorite holiday season. There is never a more prime example of confirmation bias than the Las Vegas Summer League, where Twitter is ablaze with takes telling you how much or how little Summer League matters to fulfill whatever narrative or agenda is being pushed. The most common refrain is usually to not put too much stock into the desert performances. Just how much Summer League matters and can be predictive, however, is a fair question.

That is not to say that Summer League should not be enjoyed by the masses, as it is often a basketball nerd’s dream, and one of my favorite events of the year. What I am asking, however, is how much stock should we put into varying levels of success shown at Thomas and Mack Arena?

It is important to recognize the context we are saying and the variables that come with that: for example, this is a small sample size against lower competition than The Association provides on a regular basis. Those are the most obvious differences but far from the only ones. It is important to acknowledge the contextual situations such as the roles that players are taking in regard to the offensive and defensive schemes being run by experimental assistant coaches. The biggest factor that inflates a lot of Summer League stats is the opportunity and usage rates that are allowed by the more casual type of games that highlight scorers.

That doesn’t mean there are not important things to take away from the Las Vegas event, it only means that it’s just as important to be careful with what you are looking at. There are both solid indicators of future success, as well as misleading fallacies that do not translate to the next level.

Lucky for us, we just celebrated our 20th anniversary of the Summer League, which means there is a plethora of data to extrapolate this information from. So to celebrate that benchmark occasion, I took a deep dive into some of the statistical anomalies and indicators that we can look at to see what is real and what is fake from Summer League.

There are 20 years of Summer League data to comb through, but I have highlighted the last five summer league performances, looking specifically at the rookie performances to find commonalities with their regular season outcomes throughout the beginnings of their career. It is not an exact science but there are clear indicators of what is legitimate and what is more fraudulent. There are positive signs to take away if you know what you are looking for, so let’s take a closer look.

In the last five Summer Leagues performed, there have been four All-Stars that ended SL as a top five per-game scorer. Those four All-Stars are Zach Lavine, Devin Booker, Donovan Mitchell, and Brandon Ingram. Those players, along with Jalen Green last year, are the only players to be both top five in scoring in Summer League, and top five amongst rookies in the regular season.

The raw scoring and averages were the easiest stat to look through and negate the importance just based on the careers of some of these players. While there are four All-Stars from this group of 25 players that led in scoring, there are even more furthering their careers in Europe.

A player like Chris Clemons averaged 27.5 points per game throughout his stint in Las Vegas in 2019. Let’s take a look at that and why he hasn’t been able to turn that performance into an NBA career. At 5′ 9″, there are obvious physical limitations on both sides of the ball that have a much smaller impact in Summer League, but it goes deeper than that. In his various runs in the league, he has never taken more than three three-point attempts per game and has never averaged more than 4.5 ppg, so why was he so successful in Summer League?

For one thing, the run-and-gun style is more conducive to volume scorers and smaller guards. Clemons took over 11 threes a game in Vegas, which allowed him to put up gaudy numbers off those many attempts. While that is not conducive to his NBA career, you can see the similarities in the G-League where he has averaged over 20 ppg in multiple seasons, taking 10 or more three-point attempts per game in the process.

Small scoring guards litter these lists of top scorers for that exact reason – shots are just flat-out much easier to come by, especially for ball-handlers, in the pick-up style game of Summer League. The number of shots per game is a deceiving indicator of potential success. Elite players can score with high-volume shooting, and this list includes names like Devin Booker and Donovan Mitchell, however, they are the outliers compared to players like Wayne Selden and Bryn Forbes.

So when we want to look for more translatable stats, instead of scoring, we need to look at efficiency. It is much easier to score in the summer league so it is important to look at how somebody is scoring rather than how much. When looking at a low-stakes situation like Summer League, you can throw all team score-related stats such as plus/minus out the window. I have gone through the process of breaking down some messy summer league advanced stats so you don’t have to.

Let’s take a look at FIC (Floor Impact Counter), an advanced stat created by Real GM that does not have much traction in the NBA. This is a stat that heavily weights three components: assists, shot creation, and offensive rebounds. This targets three areas that incorporate effort-based areas along with skill areas. When I pinpoint this specific advanced stat and cross-reference it with other efficiency stats such as True Shooting percentage and PPR (Pace) to adjust for the setting we are in, it gives us an interesting set of names for 2016-2017: Tyus Jones, Pascal Siakam, Bobby Portis, Jaylen Brown, and Christiano Feliciano. A much more impressive list than any other statistical list I could find of this same draft class in Summer League.

I’ll break down what exactly all of that means, in case you do not want to spend your hours referencing various advanced stats on Real GM: the biggest aspect I am trying to highlight is the offensive efficiency. If you are going to be a volume scorer, you have to be that at the highest level. Jalen Green was able to do that in both the Summer League and translate it to the NBA but most young players are not Jalen Green.

So, what are we looking for as real translation skills? The most common theme and what I was able to pinpoint through some of these advanced stats are assisted baskets. When you are looking at the players whose Summer League feasting is translatable, those are players getting easy buckets. You are not looking at your leading scorers in Summer League typically – while a Carsen Edwards-type might give you a highlight performance, it is much harder to do that against NBA defenses.

Take someone like Pascal Siakam, who averaged 13.5 ppg in his two seasons at the summer league. He did so almost exclusively on assisted baskets with a heavy emphasis on transition. This led to a very efficient performance and an expectedly high defensive rating.

The reason I use Siakam as an example is that he did not have an impact rookie season and is an outlier developmental track with exponential growth each year in the Toronto system. However, when you are looking at the Summer League numbers, his name pops up frequently at the top of lists of advanced stats, specifically for his efficiency. Siakam shot nearly 55% from the field in his two seasons at Summer League. The reason he was able to thrive in that setting was scoring in the lane.

So, what does this all mean? It means that Summer League CAN be a great indicator of success if you are looking for the right things. The misleading stats from Summer League are volume scoring numbers, as fun as they may be. There have been a lot of chuckers, and specifically, small guards to put up preposterous numbers. However, those 20-to-30-point games don’t often lead to success.

What you want to be looking for, whether with your eyes or the advanced stats, are two-way players that either create for others or score easy buckets. The isolated self-creation aspect of Summer League is a mirage, it’s a pretty facade to show how skilled these players are, but the reality comes from the facilitation on both ends. The cutting and off-ball movement is the biggest translatable ability. Disrupting offenses to create turnovers and getting out in transition for easy dunks are things that work at the next level. Likewise: cutting away from the ball and moving for off-ball jump shots are much more conducive to early NBA roles that translate at a higher level.

Not only should you be looking for the easy buck

ets, but you should be looking for creation flashes. Oftentimes these young players are not going to be getting primary facilitator roles in the NBA, so getting to flex those muscles and show glimpses of various roles they can develop are great in Summer League. Siakam is another good example of that. You can see passing flashes early on in his career and glimpses of various dribble moves such as his patented spin move that would become a trademark of the All-Star’s successful career up north.

Three Summer Knicks are on the all-time top 30 in scoring averages, but it is not exactly who you want to hear: Von Wafer, Wayne Selden, and Troy Williams. All three of those guys were inefficient volume scorers whose games did not translate outside of the freewheeling Summer League setting.

The Leon Rose era however shows promising success with stand-out LVSL performances from guys like Obi Toppin and Immanuel Quickley in years past, followed up by Quentin Grimes this year.

What is important about what he and the other Knicks showed this year was not based on isolation scoring. This team was built off of defense and transition, two things that translate much better to the next level. You do not need me to tell you that Grimes’ checked nearly every developmental box that he could have this year, but the signs are beyond just him.

It is never wise to overreact to Summer League, but what you should be doing is looking to see what translates and what develops. The Summer Knicks played hard and defended well. Whether they will get opportunities at the next level or not, those are traits that almost always translate.

»READ: Jericho Sims will have to be patient in Knicks’ center rotation