What Does a Healthy Knicks Rotation Mean for Immanuel Quickley? 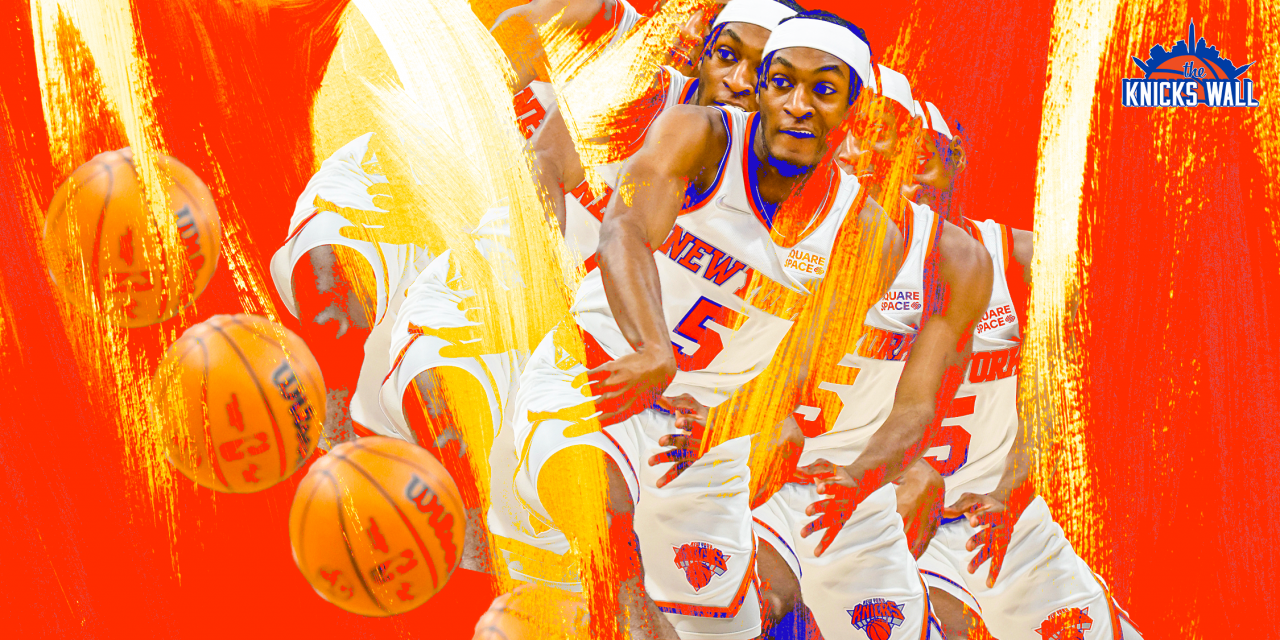 Immanuel Quickley’s role with the Knicks is dependent on a lot of factors, namely the other point guards on the roster.

The roster construction feels complete for the 2022-23 New York Knicks. With Kevin Durant holding up the entire league from making their final moves, the possibility of a Julius Randle trade or salary dump lingers. But with New York opting to sign Jalen Brunson instead of working out a sign-and-trade with the Dallas Mavericks for him, the Knicks appear done on larger moves. And with that, the conversation about the roster and rotation looms.

There are small battles here, such as the battle between Evan Fournier and Quentin Grimes for the starting shooting guard spot, who will fortify Tom Thibodeau’s bench, Cam Reddish’s spot in the rotation (or lack thereof) and how Thibs will balance a formidable three-man center rotation of Mitchell Robinson, Isaiah Hartenstein and Jericho Sims.

However, the main man here to talk about is Immanuel Quickley.

At the end of the regular season, it felt like Quickley was finally getting his chance to be the starting point guard for the 2022-23 season. The second-year man from Kentucky averaged 16.0 points, 5.2 rebounds and 4.8 assists in the second half of the season and capped off the 2021-22 campaign with two triple-doubles. Quickley, after an up-and-down season, ended on a high and felt like the key to unlocking the youth movement in New York.

Then the Knicks added Brunson in free agency. Signing a point guard to a four-year deal worth $104 million certainly muddled up Quickley’s trajectory, but it hurts even more when you see Derrick Rose returning, while Fournier and Grimes hold down the shooting guard spot. Once an easy fit as an off-ball guard as a rookie, IQ’s fit in the Knicks rotation feels less certain and much like his draft class counterpart, Obi Toppin, the opportunities to truly impact the Knicks.

In contrast, their rookie contracts continue to dwindle. Let’s talk about Quickley and how to maximize his minutes on the Knicks.

A Derrick Rose trade is best for all parties?

When the Knicks acquired Rose midway through the 2020-21 season, it was an acquisition for a team looking for any sort of punch off the bench behind Elfrid Payton. The former MVP knew the head coach, the head coach knew the precise role for Rose and everything worked out as Rose was a valuable contributor to New York’s 41-win team two years ago.

Now, Rose returns to assume the same role, but a different fit. An awkward one, to be honest. In that same time, New York saw Quickley continue to grow — and need more reps on the ball — while adding backcourt dynamo Miles McBride in the draft and finally, signing Brunson this offseason. The weakness has become a strength, to say the least.

A trade feels like the best for the Knicks here. Not only does a Rose trade help Quickley lock in a respectable backup role, but also assists in giving McBride more minutes, in earnest, as a third-string point guard, which pushes into Knicks President Leon Rose’s commitment to the youth movement. After a stellar performance at Las Vegas Summer League, McBride is a player who should be afforded a chance to contend for minutes with the main roster.

As for Rose, allowing him to thrive in a similar role on a contender would be wise at this stage of his career. The Milwaukee Bucks could use a different element in their backcourt off the bench around their shooting wings and Giannis Antetokounmpo, while a team like the Minnesota Timberwolves could see Rose as another veteran piece with playoff experience.

With Thibodeau in place, a Rose trade seems unlikely at the moment, but if the goal is to allow the young players to push the franchise forward, moving Rose to allow Quickley and McBride to have more defined roles feels like the way to go.

Immanuel Quickley and Jalen Brunson can play together

This isn’t about two-point-guard lineups and their success in the league today — we’ve all seen that and the success around the league. Instead, these two fit well together, and much like Quickley in his rookie season with D-Rose and Brunson for his entire career in Dallas with Luka Doncic, both should play together in stretches to maximize their strengths.

Offensively, Brunson’s slashing, diving, and overall ability to get into the paint will be viewed as a positive for R.J. Barrett, but what about Quickley? Allowing IQ to get (more) open threes feels like the optimal goal, but allowing Quick to get some more drives and attacks against a bent defense should allow him to further continue his development as an overall offensive threat. Maybe, in time, Quickley’s rim pressure can be an asset that allows Brunson to shoot more threes.

Defensively, Quickley is underrated in that regard. At 6-foot-3 with a +6 wingspan, the former Wildcat has shown the propensity to be an effective defender across both backcourt spots, even handling smaller wings. With Brunson offering strictly point guard defense due to his athleticism and wingspan, Quickley could pick up the slack against other assignments on defense, and with guys like Barrett and Mitchell Robinson behind both players, Brunson could be properly hidden.

Immanuel Quickley as your Leandro Barbosa

Stylistically, the players are different, but I ultimately envision Quickley in a role similar to the Phoenix Suns version of Leandro Barbosa when things calm down. In an even smaller role, similar to the way Thibodeau used Alec Burks last season before the madness that was starting him at point guard. Burks was flexible enough to handle point guard and shooting guard and handled the ball, created offense, mainly for himself, and ultimately maintained a scoring punch on the floor for New York.

Whether he plays alongside Brunson or as the lead guard, Quickley offers a ball-handling guard who can manipulate offenses with his shooting and overall shiftiness. With Bunson, he’s a secondary ball-handler who has the advantage of an already bent defense. As the lead guard, he can push the pace, run pick-and-roll and keep the offense tight, without dominating the ball.

Quickley was not given the starting point guard role and at the moment, his role feels a bit muddled when looking at the possible nine-man rotation for the Knicks. Brunson and Rose can zap most point guard minutes, while Fournier and Grimes can do the same at shooting guard. While he’s not the fifth-best backcourt player in that group, he doesn’t have an ideal spot.

It remains to be seen how much the Knicks want to get active with him. Moving Rose could open up and solidify Quickley as the backup point guard while playing with Brunson could be another layer in New York’s offensive renaissance. You could shift one of Fournier or Grimes up and play Rose-Quickley-Grimes could work, but then the question about Toppin and Reddish’s minutes comes into play.

Ultimately, Immanuel Quickley is too talented to not have in the rotation and will play. However, at the moment, the backcourt is cluttered, and it remains to be seen just where and how will New York utilize his game.