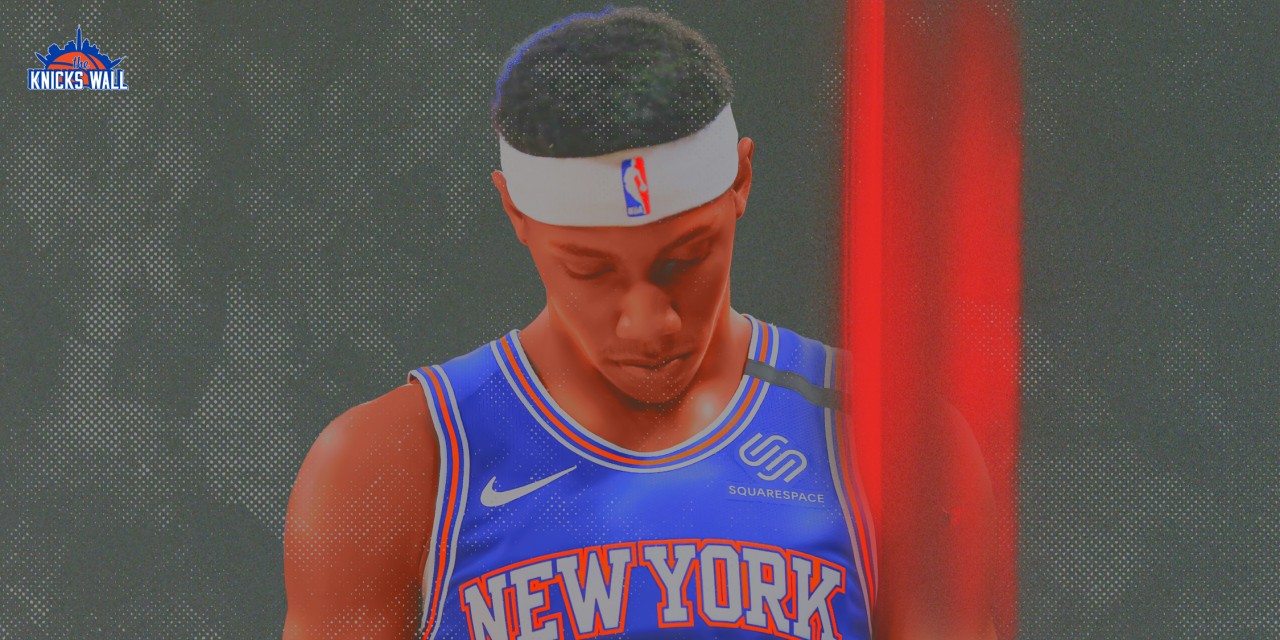 Knicks second-year swingman RJ Barrett was benched in February’s fourth quarters before coming alive in the last game. His minutes have fluctuated wildly, too.

R.J. Barrett, the New York Knicks’ highest draftee in recent history, is having a statistically bad month of February despite the team going 6-4 in this time frame.

In 10 contests this month, the 20-year-old is averaging 28.4 minutes a game, down from 36 last month and this season’s average of 33.7. In that reduced time, he has a True Shooting percentage of 50.4 while racking up similar usage numbers.

What’s scarier is that, when using Cleaning the Glass’ garbage time filters, he’s scoring 100.2 points per 100 shot attempts, good for the 17th percentile in the league, which puts him next to other wings like Caleb Martin and Derrick White.

He’s also only had three above-average shooting performances this month: against Portland, Atlanta, and at Orlando.

He’s taking fewer three-point attempts compared to his season average (not that they were very high at all, but it’s a trend in the wrong direction). Some of those attempts are being moved to shots at the basket, but most are getting thrown into the mid-range.

Head coach Tom Thibodeau spoke on Barrett’s down month before their win against the Atlanta Hawks (the “Julius Randle deserves to be an All-Star Game” interview). “If the second group is playing better, there will be extended minutes there,” Thibodeau said regarding the sacrifice of Barrett and the rest of the team, via The Knicks Wall’s Reid Goldsmith. “If not, then, as I mentioned, sometimes it’s the starters that will play more. In the end, it’ll all average out. We have to put the team first and we have to put winning first.”

It has been an interesting month to be a member of the New York Knicks. Firstly, Derrick Rose joined the team in a trade with Detroit, and then a few days later starting center Mitchell Robinson fractured his hand and has been sidelined for at least the rest of the month.

The Rose trade likely has a bigger impact on Barrett’s play, since both he and Rose work best when the ball is in their hands. According to PBP Stats, Barrett and Rose have only played 16 minutes together, which is way too small of a sample size to draw any conclusions.

Unfortunately, it’s probably not a great sign that the month Rose comes into the rotation, Barrett averages his lowest minutes per game.

So, what’s the issue then?

Maybe Thibs is right—maybe it’ll all just average itself out, and it’s best not to think too much about his February.

It kind of did average out in the team’s last game against the Minnesota Timberwolves: Barrett had 21 points in 34 minutes, shooting 10-of-20 from the floor, and was a team-best +20.

It also came on a night when Immanuel Quickley only played nine minutes, Rose at 19, and Elfrid Payton at 32. This is in line with the rest of those players’ February averages, except for Quickley, who was averaging around 20. With so many guys on the team that need the ball in their hands, it could be unrealistic to expect them all to have great games in one night, since there’s just one ball to share.

If it’s a case of too many cooks, it might be the wrong move for Thibodeau to choose Barrett as the one to lose out on playing time. He has the highest draft value, and some would say the biggest upside on the team.

But then again, are the Knicks playing games to make the playoffs this season, or are they prioritizing the development of young players?

»READ: Rowan’s regression: February has not been kind to RJ Barrett