What Happens to the Knicks If Kevin Durant Is Off the Board? 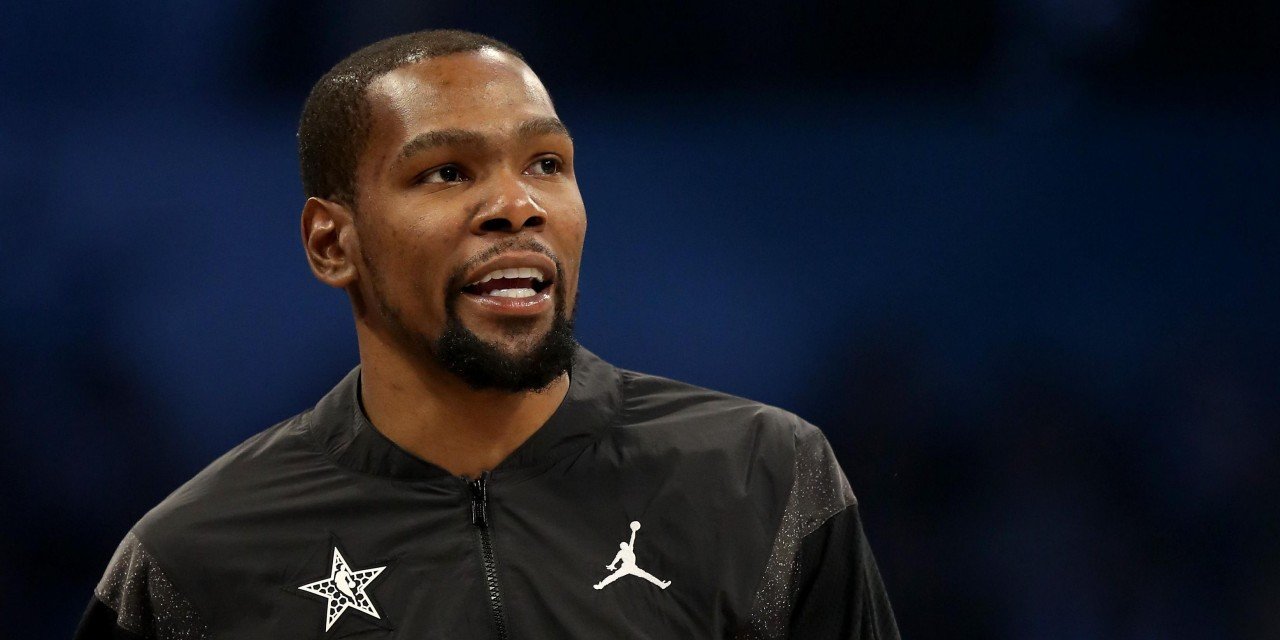 There’s no surefire, backdoor handshake deal that Kevin Durant will play for the Knicks next season. Here’s how New York can cover its bases should it miss out on the Warrior.

Depending on who you ask, Kevin Durant on the Knicks is a reality, not a possibility. And it’s not just Knick fans saying it this time.

Yes, yes, I know Knick fans are well renowned as the Photoshop Picassos of the league—although Lakers fans are right on their heels for that title—but plugged-in reporters have had Durant to the Knicks for some time, creating a fever pitch for June 30th.

But as has always been the case with the Knicks and happiness, roadblocks are starting to arise as free agency inches closer. The word is Durant will come if another superstar is with him. That presumed star has been Kyrie Irving. FS1’s Ric Bucher recently said Kyrie is only considering the Celtics or Nets.

Then there are the Los Angeles Clippers, which The New York Times‘ Marc Stein reported to be an equal threat to the Knicks to pry Durant away from the Warriors. Thanks to the Raptors’ finals run, Kawhi Leonard may end up staying in Toronto. That allows the Clippers to redirect their attention to Durant and a friend, if they can find a deal for Danilo Gallinari.

The Clippers are armed with a great owner (Steve Ballmer), championship coach Doc Rivers—who made the playoffs and tested the Warriors more than any team that didn’t have James Harden—and Jerry West, the key player in getting Durant to the Warriors three years ago.

As if convincing Durant to leave the greatest team ever wasn’t a tall task in itself, the addition of the Clippers into the mix enhances the uncertainty of the former MVP landing in New York.

To put some water on the fire, a similar situation came up regarding LeBron James last season. He was reported to be going to the Lakers all season yet, as free agency approached, suddenly the Sixers were under consideration. That could be what is going on with the Clippers. Durant and his camp have been peppered with Knicks questions since at least February; throwing another legitimate team into the race helps shift the spotlight.

For argument’s sake, let’s say it isn’t just a PR move and he does choose the Clippers or stay in Golden State. Where does that leave the Knicks

Luckily, the Knicks remain in a flexible position heading into the summer. They own the third pick in the draft, have a nice stable of young talent to use for trade bait, and about $70 to $73 million in cap space depending on what they decide to do with Allonzo Trier.

Missing out on Durant would be a Deontay Wilder punch to the gut, but it would not be the end of the world. Here are a couple directions the team could go.

Trade for a Star

A trade for Anthony Davis or Bradley Beal could make the Knicks attractive enough to entice another star to join the fold. Not landing the top pick in the draft was disappointing, but R.J. Barrett, the presumed third pick in the draft, is a valuable trade piece in his own right.

The Knicks could create a package centered around Barrett for Davis. According to Brian Windhorst and Stephen A. Smith, Davis really wants to go to the Knicks. Given that it’s plausible AD signs an extension, limiting the risk of parting with the promising Barrett only sweetens a swing for the All-NBA talent.

The Pelicans are primed to draft Zion Williamson; adding his best friend and Duke running mate in addition to Mitchell Robinson, Dennis Smith Jr., and/or Frank Ntilikina and pick(s) is as impressive a package as they can fetch.

At 26 years old, Davis becomes the most talented building block the team has had since Patrick Ewing, and potentially reopens the door for Kyrie Irving.

Bradley Beal should come at a cheaper price, although the third pick would certainly have to be included. Beal, unlike Davis, is under contract for two more seasons and is entering the prime of his career, but is viewed less of a star than The Brow. A Beal trade would give the Knicks a star and a chance to assemble more pieces around him with the cap space flexibility still available.

The least appetizing, but possible trade scenario, involves moving back in the draft for more assets. SNY’s Ian Begley reported the Knicks have explored the possibility of trading with the Hawks to get picks 8 and 10 in the draft.

A trade like that is more possible if Durant and a friend are coming. Without Durant and Kyrie, such a trade can still be valuable.

Barrett projects to be a stud—but what if they can add a similar scoring threat such as Kevin Porter Jr. and a defensive stud like Brandon Clarke? It allows them to cut costs on the free agent market and arms them with more assets in the war chest.

Remember when the whole 2010 season was treated as a LeBron James welcoming party? The seasons leading up to the summer of 2010 were spent purging the roster to create room to sign LeBron and a friend.

That summer ended with Amar’e Stoudemire firmly declaring the “Knicks are back.”

Missing out on your target is fine. Spending like the extra money is burning a hole in your pocket is not, however.

There is no Stoudemire in this free agent class, other than DeMarcus Cousins, who is not rumored to be on the team’s radar as of yet. This summer’s version of Amar’e would be revered New Yorker, Bronx legend, Kemba Walker.

Kemba is great, and will always be an iconic hoops figure in New York. The problem is, he comes at a much higher price tag after earning a spot on the third team All-NBA. This qualifies him to sign a deal up to four years at about $141 million.

Such a commitment at a position where you don’t have to spend that much to win is a tough ask. A Walker signing with no other star does little to move the needle and financially cripples the team from making a big splash for the next few summers.

Jimmy Butler could fit into this category as well, although it is a stretch. It’s hard to imagine a scenario where Philly doesn’t keep their current core.

Butler adds more versatility to the roster than Kemba can. The Marquette product can guard 1-4 and gives the Knicks the alpha they currently do not possess. Arriving with no other star is what makes Jimmy less attractive. Given his history, a few bad stretches will lead to irritability and a possible situation where Butler destroys Kevin Knox just because.

This is obviously the least desirable plan, and one we all pray the team avoids.

Star hunting becomes difficult if Durant is not in the mix. Landing lower tier stars like Tobias Harris or Khris Middleton will likely be off the table as well. There are still some gems to be found on the open market.

One name that sticks out is Julius Randle. He has been undervalued most of his career and most likely to be on a new team next year. The Lakers let him go because they’re a certified clown show, and the Pelicans are unlikely to bring him back with Zion soon to be on the roster.

He will command a higher price than the $8.6 million he signed for last summer, but still reasonable enough to sign without crippling the cap. On the TKW Offseason App Randle carries a price tag $10 million a year, which sounds about right.

Randle is the perfect 4 to play alongside Mitchell Robinson. His game has evolved to where he’s comfortable handling the ball and spacing the floor (shot a career-high 34.4% from three) while remaining effective on the glass.

We saw how effective Noah Vonleh was last season. Randle is a better version of Vonleh, who can be relied upon as one of the team’s leading scorers night in and night out.

Sometimes the best course of action is no action. As noted earlier, the cap space is not going to burn a hole in Dolan’s pocket. Rolling a good amount of that cap into next season is not a bad option.

The new regime has successfully laid the groundwork of a family atmosphere. Adding Barrett, Jarrett Culver, or Darius Garland to the current group of Fiz Kids and continuing “the process” while patiently waiting for their next opportunity is not a bad option.

Perhaps Durant wants one more year with the Warriors. Maybe Giannis decides he doesn’t want to stay in Milwaukee. A lot can happen in a year. Remaining flexible when the time comes (i.e. the potential Davis trade right now) should not be overlooked.

If this is the route the front office opts to take, drafting Barrett at three makes the most sense. He carries a high floor, a higher ceiling as a potential All-Star, and possibly more with the proper development. Former players and coaches have given glowing reviews of Barrett; there is cause to hope that he is that homegrown stud the team has been searching for.

And if he’s not, they still have the ability to be active on the trade market, throw money at top free agents, or tank once again.

The overall theme of the summer should be, don’t be stupid.

This is the best situation the team has been in a long time. Now is not the time to overreact to things out of the team’s control. If Durant comes, great. If he doesn’t, move on and plan the next move.