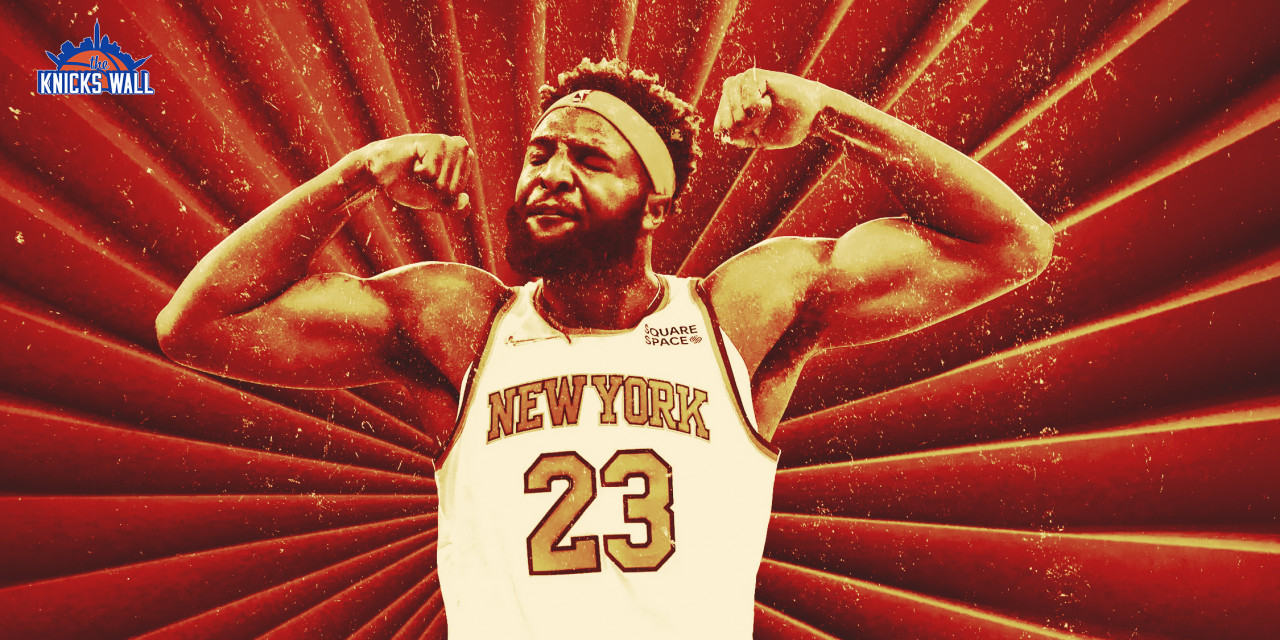 Knicks starting center Mitchell Robinson has been underperforming his once-defensive-ace self. A free agent next summer, things get dicey sooner than we think.


Mitchell Robinson, now in his fourth pro season, has struggled with conditioning and a constant string of rampant injuries throughout the first quarter of the 2021–22 season, with his presence on the court not having the impact many thought it would.

The gangly, athletic big man, originally selected with the 36th overall pick in the 2018 NBA Draft, has shown signs of improvement in areas defensively through three seasons but has failed to develop any form of offensive ability, totaling three made field goals outside of the painted area through 178 career games.

There has been a myriad of reasons for the Louisianian’s struggles and inconsistencies this season. The nagging injuries, which haven’t kept him out of many games but hampered him in some way, coming back from a broken foot with no physical base and, as Robinson noted, the physical changes to his body meant he had to adapt his game.

All of this aside, it would be fair to argue there hasn’t been the “wow” moment where everybody goes, “Mitch is back,” or “this is what we needed last year.”

It just hasn’t come to manifest itself through the first 23 games of the home and away season in a consistent manner, and it makes one think about what is the next move? Is Robinson, and his meager $1.8 million salary, shipped in one trade or another before next February’s trade deadline? Do the Knicks persist with him for the next 59 games and look to re-sign him as an unrestricted free agent come July?

A season ago, or even two months ago, if you took a poll, it would likely lean to the latter, but now, 23 games into an uninspiring campaign, it is not so clear.

Context is important, however. While Robinson has had his own struggles, he had long been part of the worst lineup in the Association (which is sixth-worst when sorted by Net Rating), likely impacting the big man’s level of play.

New York’s defense has been a miserable mess for much of the season and their offense has stagnated in the process, none of which is conducive to Robinson’s skill set and as a result left him in impossible situations defensively and in no man’s land offensively from time to time. If New York was the ruthless defensive unit of yesteryear and the ball-moving, up-tempo team they envisaged in training camp, the conversation may very well be different when it comes to Mitchell Robinson.

Almost all of Robinson’s offense is predicated on effort and hustle, something which can wain over the course of a game. His role specifically is to set screens, role with purpose and if not, wait patiently in the dunker spot and then position himself to crash the offensive boards, which he is proficient at, ranking in the 89th percentile, per Cleaning the Glass.

Otherwise, Robinson can be, and has shown to be, successful is in the up-tempo style of play where he can create offense from his own defense; by blocking shots and keeping them inbounds plus then motoring past flatter-footed big men for dunks, but this is a rarity with how New York currently plays, ranking 22nd in transition plays per game.

Over the journey, New York’s no. 23 has expressed the desire to become a better and more involved offensive player, regularly posting his own highlights in the offseason of a variety of jumpers from the corner or off the bounce, none of which has materialized. As he is now 178 games in, it is likely what you see, is what you get.

The ‘Bockers centers became unplayable in the 2021 playoffs because of how little of an offensive threat they posed, allowing Atlanta Hawks big men to ignore them on the offensive end, significantly hampering the Knicks.

While it has yet to come home to roost this season with New York having a nearly identical Offensive Rating with Robinson on and off the floor, Tom Thibodeau would like to avoid a repeat performance of Nerlens Noel being wilfully ignored when his team has possession.

The defensive side of the ball, usually Robinson’s domain, has been a struggle this season in sections, whether it be because of schematics or his well-worn reason of not being used to his size and as a consequence his inability to move his feet as quickly as he once could. The free-agent-to-be has shown glimpses of the defensive stalwart seen through his first three pro seasons, however, there have been large areas of concern, especially on the perimeter.

Robinson was extraordinary early on in his career at defending on the perimeter, be it switching on guards or guarding stretch fives; in his debut season, Robinson was among the league leaders for three-pointers blocked.

This season has been a different story, with range shooting centers regularly feasting on the Robinson and the Knicks. Indiana’s Myles Turner canned a career-best seven threes, Chicago’s Nikola Vucevic broke hearts with his five triples, and reigning MVP Nikola Jokic was left free to fire on his way to three made threes and 32 points on 14-for-19 shooting.

It has been a regular occurrence this season where the closeout from Robinson, and many other of his teammates too, has been late, tokenistic, or altogether not there.

On the interior, Robinson has had a significant impact in comparison to when out on an island by the three-point line, by conceding only 4.6 defensive field-goal attempts from within six feet of the basket each game, which exemplifies how he is a deterrent to drivers, plus another indicator being his block percentage, which is 3.3%, good for the 90th percentile, per Cleaning the Glass.

Robinson is averaging 1.7 blocked shots per game through 20 outings, which doesn’t blow you away, but when you consider the block percentage and the opponents’ shots attempted when he is in the vicinity, it paints a clearer of the impact he is having closer to the basket.

It may be too early in the piece for the jury to have made a verdict on Mitchell Robinson as he looks to be struggling with conditioning and adapting the way he plays because of his physical changes.

We have seen areas where he has significantly struggled but areas where he has imposed himself and it is true for the games themselves. There are moments where it looks like he is on the precipice of greatness, such as the third quarter against the Bulls last Thursday and other times where he has looked discombobulated and been a less-than-impactful player.

The New York Knicks talent evaluators must ask the tough questions about Mitchell Robinson; can he regain the form of being a consistent net-positive player or is he simply an up-and-down replacement-level player?

The market for a player in his mold looks fairly set, that being 20-something-year-old defensive-oriented big men with little versatility offensively. Boston’s Robert Williams III extended for an average of $16 million annually, Daniel Gafford for $13.4 million, and Wendell Carter for $12.5 million.

New York holds bird rights for Robinson meaning they can exceed the salary cap to re-sign him, but the question is, do they wish to compensate him on this level, especially so considering Nerlens Noel is on the books $9.2 million guaranteed next season?