What If the Knicks Never Won the 1985 Draft Lottery? 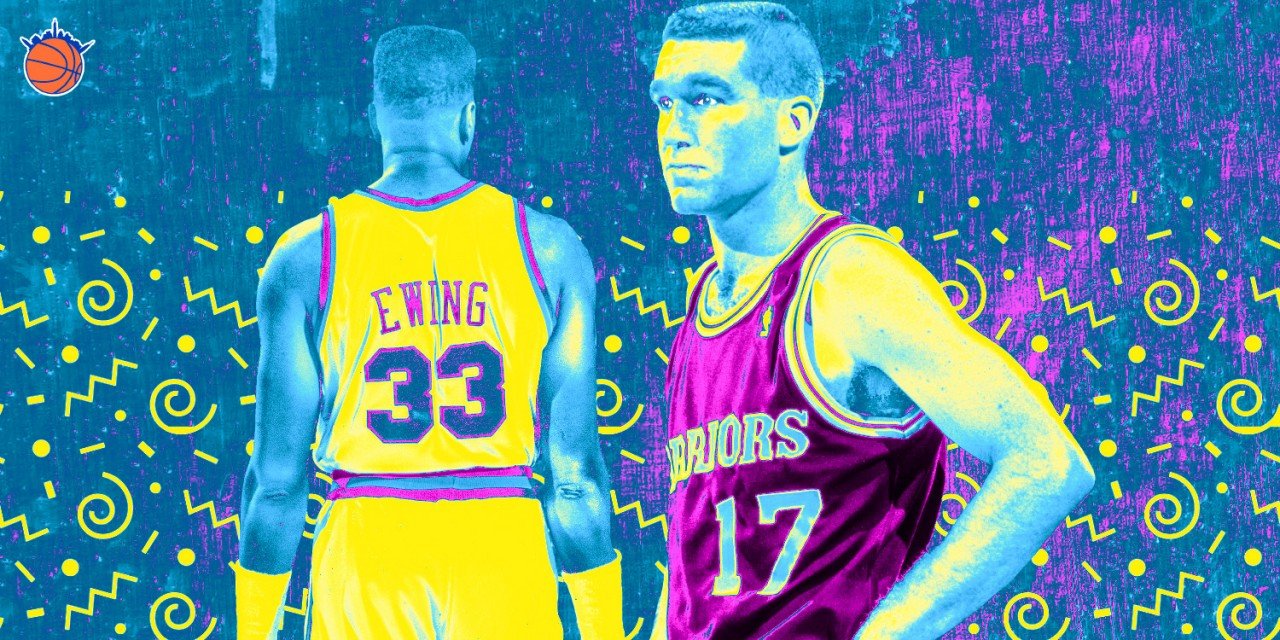 Patrick Ewing is the biggest star in New York Knicks history in the last 35 years. What would have happened if the Knicks couldn’t draft him?

Concluding our draft “what-if” series, we throw back to the 1980s for a retrospective on the franchise-changing selection of Patrick Ewing with the first overall pick in 1985.

It goes without saying, but 1985 changed the direction of the New York Knicks.

That year blessed All-American Georgetown big man Patrick Ewing upon the Knicks with the first overall pick in the draft. It wasn’t the first time the Knicks had the first selection (Art Heyman, 1963; Jim Barnes, 1964; Cazzie Russell, 1966); however, it remains the only time in franchise history the Knicks moved up in the lottery era. Yes, the Knicks have only remained in the same position as their record or fell in the lottery since that fateful day.

So much of the conversation surrounding Ewing, the Knicks, and that draft seems to revolve around a conspiratorial inquiry: Was the lottery rigged so New York would win?

The question has spawned numerous theories, chief among them is the “frozen envelope” one—that the NBA lowered the temperature of the Knicks’ envelope so Commissioner David Stern would identify the paper in a bowl and select it during the lottery drawing.

It’s hard to say that the conspiracy has been soundly debunked, but it’s undeniable that Ewing towered over the rise and fall of Manhattan hoops during his 15-year Garden residency.

So, keeping with the 1985 theme, let’s hop into our DeLorean powered by Uranium stolen from the Libyans and time travel to the draft and change the course of Knicks history—for better or worse.

It’s May 12, 1985. The number one movie in the country is Code of Silence starring Chuck Norris, who queerly eschews martial arts for guns—definitely not germane for the future of America whatsoever. Madonna’s “Crazy for You” tops the Billboard charts, and the NBA no longer decides the first overall pick with a coin flip because it was a central pillar of Ronald Reagan’s campaign in the president’s landslide re-election victory or whatever, along with introducing crack cocaine in inner cities and doing zilch about the rising HIV/AIDS epidemic.

None of the frozen envelope, folded envelope, or Zapruder film–type conspiracies come true at the NBA’s inaugural draft lottery where former Knicks great Dave DeBusschere is representing the team. Instead, the 1984–85 season’s worst team, the Indiana Pacers, receive the rights to draft one Patrick Ewing with the first overall pick after an illustrative four-year collegiate career at Georgetown University, winning one national title and appearing in three.

The Knicks will draft at three and look to swing for the fences to pair a titan of a basketball player next to premier scoring threat Bernard King, who suffered a devastating knee injury at the end of the season and whose future with the franchise is indeterminable at the moment. (King would miss the entirety of Ewing’s rookie season, appear in six games the following season, then the Knicks would forego re-signing the forward, wary of King’s health.)

So, what are New York’s needs? Hahahahaha, I’m just kidding—they’re a 22-win team and everything is on the table, especially with King’s future in jeopardy. Fast forward to June 18th. Now, in re-doing the draft, it would be unfair to gift the Knicks with a Karl Malone, who was drafted at 13 by Utah and played well at Louisiana Tech but was by no means considered the top-caliber type of talent like Ewing, then the “Zion Williamson” of early-’80s college hoops.

No, after Ewing goes number one to Indiana—predating Roy Hibbert’s now-defunct @Hoya2aPacer social-media handle by three decades—and the Warriors get 6-foot-9 power forward Wayman Tisdale from Oklahoma. Never an all-star, Tisdale played a dozen years in the Association and later tragically died from cancer treatment complications at just 44 years young.

That leaves none other than local kid Chris Mullin of St. John’s fame on the board for the Knicks at three. The New York franchise scoops up Mullin, the Brooklyn-born baller who would go on to rep the USA on the 1992 Dream Team with Ewing and, like the number one pick, played in a contested Big East.

The Knicks definitely didn’t go home empty-handed despite missing out on unanimous generational talent Ewing. In drafting Mullin, pundits wonder what this means for King and the Knicks since the new rookie plays a similar position.

Ultimately, it doesn’t mean anything; King’s career within New York fizzles out anyway and the Knicks make the local product Mullin the face of the franchise. (Also, Run-T.M.C. never materializes, crippling the unlicensed NBA merchandising industry.)

It’s unmistakable that Mullin and Ewing’s respective careers have brought them back to where it all started; coaching at their alma maters. So far for Ewing, that’s a 34-29 record at G’Town in two seasons. For Mullin, it’s more disappointing. The former third-overall pick of the New York Knicks (remember, in our reality) was canned by St. John’s after a four-year stint produced a 59-73 record and a single NCAA tournament appearance. As depressing as this scenario lays out, maybe Mullin’s career in New York as a professional player landed better.

Some of those who subscribe to the frozen envelope theory also believe that it wrought a curse; a monkey’s paw, a double-edged sword of sorts. The Knicks were kings for two nights in May and June of 1985, and of course, they saw longevity with postseason appearances stretching in the ’90s, but ultimately the Knicks never lifted the Larry O’Brien Trophy during Ewing’s time with the franchise.

Does that change with Mullin on the team? The answer’s no. After taking his bruises in his first two seasons, Ewing eventually transformed into a leader of the team and brought the Knicks back into the playoffs in 1988—a place they would call home for 14 consecutive seasons (the last one in 2000–01 was without the center). Mullin, however, becomes an overall less impactful player. A dynamic scorer on the perimeter, yes, but the Knicks crawl into the next decade with higher draft picks than they would have been gifted with the better Ewing. Maybe they’re able to build a better team, though. But that’s not fair to assume—there’s only so much you can gesture without going overboard, and the drafting process in the dystopian future is something we can’t predict.

Instead, we can make a different but huge, nonetheless, decision in terms of the vacant head-coaching position left by Rick Pitino. After the Knicks sack Pitino, Don Nelson chooses the Knicks instead of the Warriors and forms a bond with Mullin in the Big Apple instead of the Bay Area. Nelson implements his run-and-gun style of offense in New York, who are more impressionable about it than Ewing was. Despite cracking the 50-win total once, the Knicks never win two playoff series in the same season. Nelson is fired but replaced by young—and balding—Jeff Van Gundy who promises to strengthen an unimposing defense.

Why is the Knicks’ defense weak sauce, though? No Ewing means no Charles Oakley, folks. The Knicks never pull the trigger on the Bill Cartwright trade to Chicago that netted fan favorite (excluding James Dolan), the Oakman. That leaves Cartwright manning the paint and content with his starting role versus playing backup to Ewing on Earth 1.

It’s strange to think a Ewing-less Knicks franchise isn’t impacted too much. But it also reinforces how even a modicum of success—the aforementioned 14 postseason appearances in a row, including the 1994 Finals and 1999 runner-up to a fantastic Spurs team in the shortened season (come on, New York didn’t really deserve to be there after the lockout)—has touched thousands of Knicks fans in a positive way. For a generation of orange and blue wearing die-hards, watching Ewing, Oakley, and John Starks cemented a larger-than-life legacy that represented New York basketball in the national conversation.

On Earth 2, where Chris Mullin leads the Knicks to first-round exits galore, the ‘Bockers never reach the heights—and eventual letdowns—if Ewing were in charge. Patrick, however, also gets a chance to team up with future Hall of Famer Reggie Miller in Indiana, producing a team that overcomes Hakeem Olajuwon and the Houston Rockets in the 1994 Finals (an NBA without Michael Jordan), but ultimately falls to young Shaquille O’Neal, Penny Hardaway, and the upstart Orlando Magic. (We never get the infamous choke motion Miller delivered to Spike Lee in the first row. Also, Spike wins for 1989’s Do the Right Thing because I say so.)

After that? Perhaps the Magic go on a dynasty before Jordan’s post–Space Jam return and quell any notion that his early-’90s three-peat was anything but the usual in this league.

Maybe O’Neal never links up with the Los Angeles Lakers after feeling aggrieved in Orlando. Kobe Bryant is down three rings and LeBron James fans have an easier time dismissing the notion that “Kobe better.”

The Spurs and Pistons have another ring each while the Pacers—during Ewing’s final season à la David Robinson and San Antonio—win one more for Pat while Reggie sticks around for a few more years. Ewing also retires in 2000 instead of 2002, going out on top and removing himself from organized basketball for a few years before settling into his role with his alma mater, and he doesn’t rep the Knicks at the 2019 draft lottery.

The NBA gets to share the wealth more with Ewing not in New York, and Knicks fans never get the highs of the Ewing year with the Mullin era, instead content with making short-lived playoff appearances.

»READ: What do the Knicks look like if they never drafted Kevin Knox?

»READ: What if the Knicks never drafted Frank Ntilikina?

»READ: What if the Knicks never selected Kristaps Porzingis?