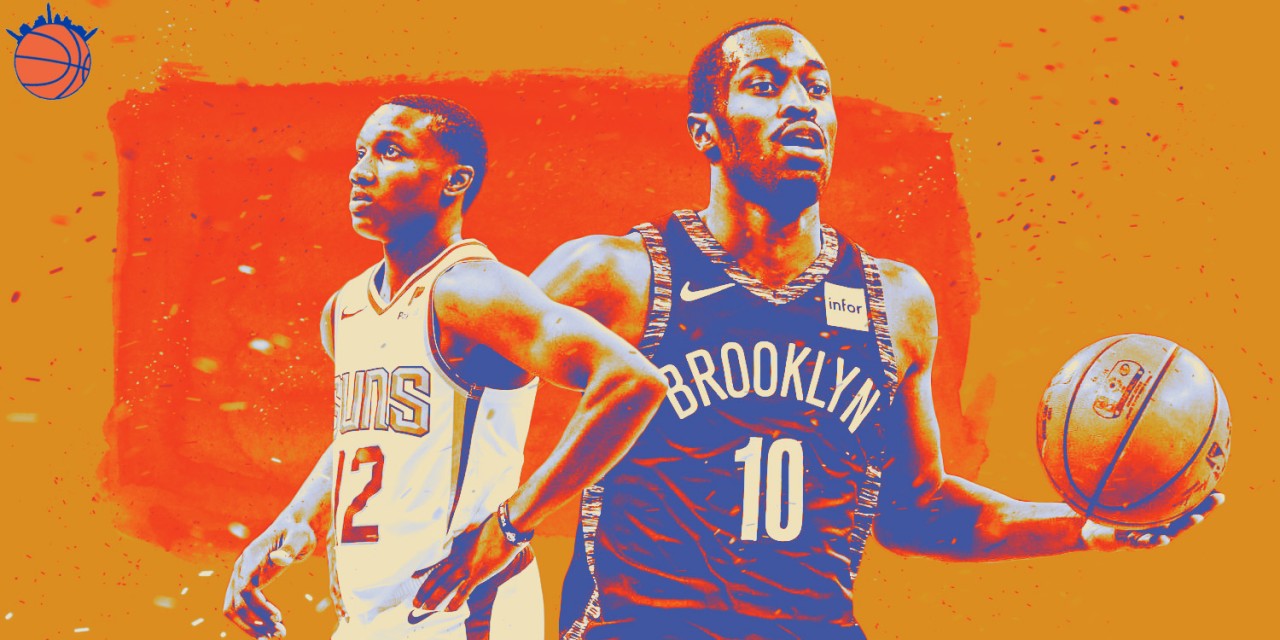 The Knicks swapped two former G Leaguers a few weeks back for two new raw players—Theo Pinson and Jared Harper. What’s the deal with them?

The New York Knicks’ organization is no stranger to national media attention. More often that not, that media attention has little to nothing to do with the on-court product the Knicks manufacture. When the Knicks’ front office made two competent, telling transactions in the span of two days, it came as little to no surprise that the media was rather quiet.

Still, there is plenty to make of the fact that the first moves of Leon Rose’s tenure were waiving Kadeem Allen to claim Jared Harper from waivers and waiving fan favorite Allonzo Trier to claim Theo Pinson from waivers. Not only do the Knicks have two new players, but these transactions also give us some minor insight into what new team president Leon Rose and company hope to accomplish in their first year at the helm of the Knicks’ front office.

Kadeem Allen largely provided two things for the Knicks during his two years with the team. The first was that he acted as a benchmark for how injured the Knicks’ backcourt at a given time. If he was appearing in a game, it clearly conveyed that there were only two or three guards available that night. The second thing Allen brought to the table was consistent, stable guard play. With the Knicks, he shot 45.4% from the field and 42.3% from three.

Why give up on a reliable source of production that could be called on in a pinch? Both the Harper and Pinson acquisitions indicated that the Knicks’ front office is less concerned with production from known quantities and more interested in rolling the dice with its fringe roster spots. Allen was reliable yes, but he also turned 27 last season and had shown little to no substantial development with the Westchester Knicks.

Harper, meanwhile, exudes potential. After leading Auburn to the Final Four in 2019, Harper was a stud in his first year in the G League. He averaged 20.8 points, 2.5 rebounds, and 5.7 assists per game for the Northern Arizona Suns on 41.2% shooting from the field and 35.9% from three. Harper will take the two-way contract spot that was previously occupied by Allen.

This tells us two things about how Rose is leading the front office. It shows that the former CAA super agent and company are more interested in rolling the dice on a less proven player who has the ability to develop into something significant than keeping a player the franchise has trusted in the past with a definite ceiling on his ability to blossom as a player. It also demonstrates that Rose is not putting all of his chips in the work of prior player development efforts of the Knicks.

Many who followed the Westchester Knicks closely last year were likely hoping that sharpshooter Lamar Peters would join Kenny Wooten as the Knicks’ second two-way contract. Peters was ahead or tied with Harper in every traditional category except points per game last year and shot the ball better from the field and from three in the G League. The signing of Harper, coupled with the fact that Vice President of Player Development Craig Robinson left the organization a few days ago, show that Rose is interested in pursuing avenues outside of the Knicks to improve the franchise.

No one truly symbolizes a homegrown Knicks player from the past two years like Allonzo Trier. That did not prevent Rose from waiving the iso aficionado after two seasons that saw Trier rise from an undrafted player on the fringe of the league to a proven scorer capable of adding value off the bench for the Knicks. Still, Trier had clearly hit his ceiling on the Knicks, highlighted by the fact that he averaged 22.8 minutes per game in 64 games in 2018–19 and only 12.1 minutes in 24 games in 2019–20. He is a good scorer, a bad distributor, and a bad defender, and Rose clearly felt that, no matter how much longer Trier spent with the Knicks, these things were not going to change.

While the Knicks knew that they were going to get good nightly scoring from Trier, Theo Pinson’s game brings far more mystery to the table. His counting stats are rather underwhelming, especially when compared to Trier’s. In 51 NBA games over two years, Pinson averaged 3.9 points, 1.8 rebounds and 1.5 assists per game on 30.7% shooting from the field and 21.4% shooting from three.

His G League numbers, however, tell a wildly different story. Last year in the developmental league, he averaged 15.1 points, 6.6 rebounds, and 5.1 assists per game to go with 38.5% on threes. That is not too shabby. But the drastic drop-off in Pinson’s on-court production in the NBA invite the question: why is Rose willing to roll the dice on such an unproven player?

One reason could be the value Pinson brought off the court during his stint in Brooklyn. It is rare for an owner to personally thank any player for his time with a team, and rarer still to leave a heartwarming message about a player who never averaged more than 12 minutes a game:

I appreciate the spirit and energy you brought to every game. https://t.co/x7LOVks0r8

In a farewell piece on NetsDaily, writer Chris Milhoen described Pinson as a “fan favorite and super teammate.” It is clear that Pinson played an important role in setting the tone for the Nets’ infamous culture. There is not typically a tremendous amount of value front offices can derive from the 11th and 12th men on their teams. If the end of your bench can provide average value on the court while also bolstering the team’s morale and unifying teammates, then there is additional value there.

While Rose’s first two transactions at the helm of the Knicks will not be remembered as blockbuster moves, they do signify an “out with the old, in with the new” mentality. Trier, a vestige of the Steve Mills and Scott Perry front office, and Allen will be missed. While it remains to be seen whether Rose’s bets on the potential of Jared Harper and Theo Pinson will pay off, one thing is very clear: the Knicks will not be shy about shaking things up.