What We Learned From the ‘Point RJ’ Barrett Experiment 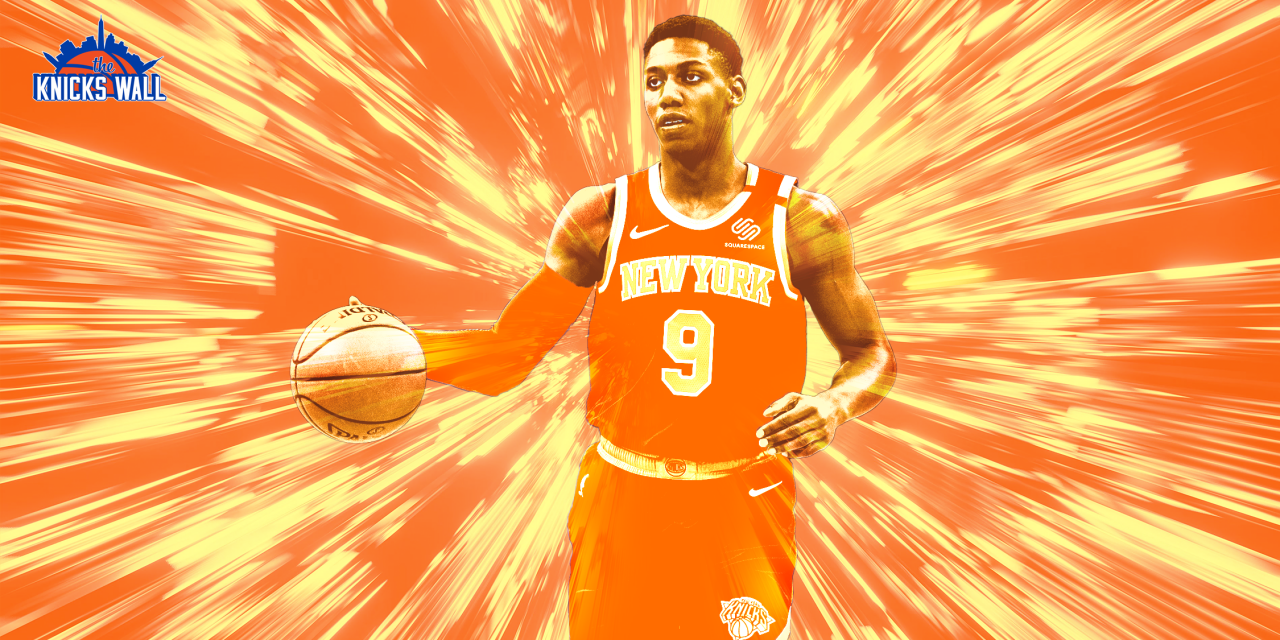 RJ Barrett is unlikely to be a long-term, full-time point guard, but this past month demonstrated playmaking chops for the star-in-the-making.

After a start to the second half of the season marred by injuries, elite opponents, and some refereeing malpractice, Elfrid Payton (sadly) and Derrick Rose (thankfully) have finally rejoined the New York Knicks lineup, bringing some stability to the backcourt rotation.

This is mostly a good thing, as several of the Knicks’ nail-biting defeats laid bare the team’s desperate need for a slashing playmaker like Rose—especially in the second unit, which often floundered if either Immanuel Quickley or Alec Burks wasn’t getting busy going supernova from deep.

But there’s also a cost to the two veterans’ returns, aside from the damage inflicted by Payton: the end, for now, of the point guard R.J. Barrett experiment.

Though Frank Ntilikina and Quickley were each named starters at various points during Payton and Rose’s respective absences, it soon became apparent that neither young guard fully had Tom Thibodeau’s trust. More often than not, in the crucial moments of the game, Thibodeau would turn to a lineup of Barrett, Burks, Reggie Bullock, Julius Randle, and either Nerlens Noel or Mitchell Robinson, and while the results weren’t always pretty, the process behind them was genuinely exciting. After all, Barrett’s passing has long been the most intriguing part of his skill set, one which, if unlocked, could help separate him from some of the league’s other young potential-filled wings. Fans have been clamoring since early in his rookie year for more minutes for Point R.J., and finally, we got to see it in action.

RJ Barrett lobs it up to Mitchell Robinson in #PhantomCam!@nyknicks 33@LAClippers 31

With Thibodeau as a head coach, this move was hardly surprising—in fact, it was one of the main points of appeal when he was hired. After all, this is a coach who helped unlock Jimmy Butler as a facilitator, tried to use Zach LaVine as a point guard, and would often have Andrew Wiggins serve as a primary ball-handler, running pick-and-rolls and orchestrating the offense. And while the Wiggins experiment failed miserably, both LaVine (currently posting one of the most efficient combinations of volume scoring and facilitating in NBA history) and Butler (one of five players 6’7″ or taller to ever have a 20-plus point per game season with a usage rate over 25% and an assist rate over 37%) clearly grew in leaps and bounds in how they processed the game when trusted with added responsibility early in their careers by Thibodeau.

Like the aforementioned wings, Barrett seemed to blossom with the burgeoning role given to him. While his vastly improved three-point shooting is probably the most surprising aspect of his game in year two, the passing is equally, if not more, impressive to watch develop. Barrett is now dishing over three assists per game on the season, and in the month of March, he posted averages of 20 points, six rebounds, and almost four assists per game.

The list of players who have matched his season averages (17 points, six rebounds, three assists) at 20 years old is one that should be encouraging to any Knicks fan: LeBron James, Magic Johnson, Luka Doncic, Chris Webber, Zion Williamson, Kevin Garnett, Antoine Walker, and R.J. Barrett.

Meanwhile, the group of 6’6″ players averaging at least 30 minutes a night with a 15% assist rate is a list of All-Stars and MVPs, and the five-man group of Barrett, Lonzo Ball, Shai Gilgeous-Alexander, Evan Fournier, and Kevin Huerter. Simply put, the young wing who wasn’t deemed worthy of one of the 10 All-Rookie spots last year is putting the game together at a near-elite level.

Good thread. RJ’s weakside passing has been absolutely deadly in its precision and awareness this season https://t.co/2itej9fwl2

There are three types of passes Barrett has developed a particular affinity for, and each one plays off a different aspect of his self-creation ability.

As mentioned in the above tweet, Barrett’s improvement in finding weak-side shooters in the corners this year has been nothing short of spectacular.

With a blossoming off-the-dribble and post-up game, Barrett has managed to find all kinds of angles to use his height to see over defenders and take advantage of defenders cheating towards the basket, expecting him to drive. Thibodeau, to his credit, seems to recognize the advantage this creates and has been trying to play Barrett in three- or four-shooter lineups as much as possible of late. Randle, Burks, and Bullock have all flourished in such situations, playing off Barrett’s ability to make his way to any spot in the halfcourt he wants and make his reads from there. Knox and Ntilikina have benefited as well in their limited minutes. Quickley, as good as he is at creating threes off the dribble, is still learning how to be an effective relocator and off-ball threat, but he’ll get there in time. The only person who hasn’t thrived in these situations is Obi Toppin, who for some reason has been unfathomably bad shooting from the corners this season.

The second type of pass that Barrett has basically perfected is the dump-off to the big man.

BEAUTIFUL manipulation by RJ here to set up this dime to Mitch pic.twitter.com/QPzPevztkQ

Teams still working off last year’s scouting report know that Barrett wants to get to the rim and that he’s okay forcing up a shot once he gets there. But that was Rookie Barrett. Sophomore Barrett has much more patience and cunning and now understands how to wait until the defense is fully committed to stopping his drive before finding his big men for easy dunks.

The last type of pass Barrett has fallen in love with is one that the team desperately needs, given Payton’s regression as a playmaker.

RJ TO MITCH LOBS FOR THE SOUL pic.twitter.com/b57ub27m9Y

That’s right—Barrett has suddenly become one of the team’s best lob passers. Seeing as three different big men on the team are at their best rolling to the rim (Robinson, Noel, and Toppin), this is crucial. Barrett is able to leverage the threat of his self-creation out of the pick-and-roll to find his big men attacking the basket over and over again. For a team that can start to stagnate if the three isn’t falling, this has proved invaluable—Barrett is able to create advantage situations out of thin air to get the offense to start moving.

But it’s not just the isolation passing that’s been so encouraging. Barrett’s processing speed has gotten considerably faster, allowing him to make difficult reads quickly to keep defenses guessing.

kings were zoning up so rj makes a good read by cutting and throwing the lob to noel pic.twitter.com/sxBiw5DInh

Barrett’s passing improvements also show a deeper level of improvement than simply seeing the floor better. They’re rooted in the same underlying development that caused his finishing numbers at the rim to rise by 8.0% from last year to this one. The game has slowed down for him, and he’s found his patience. His craft around the basket has improved a massive amount in a short time, to the dismay of the Wiggle Police. Instead of trying to bulldoze his way to the rim every time (which he can still do), he has started to figure out the magical effects of decelerating and keeping his defenders off-balance.

Now, it’s important to offer the caveat that Barrett isn’t ready to step into the starting point guard spot anytime soon. Some—most, even—of the lineups featuring Barrett and no Payton, Rose, Rivers, or Quickley, have been successful, but some of them have struggled mightily. The average Offensive Rating of these lineups is 91.8 and the average Defensive Rating is 94.6, so it hasn’t all been peaches and sunshine. Those numbers are largely sunk by the atrocious performances of lineups often featuring one or more of Knox, Ntilikina, or Toppin, which presents a whole other set of practical and team-building questions.

But there are very positive signs. The main one: the lineups that feature Barrett, Burks, Bullock, Randle, and any of Taj Gibson, Robinson, or Noel have all been wildly positive, with Net Ratings of +83.3, +39.2, and +27.3, respectively. The sample sizes at play here are small, but the formula seems to hold that surrounding Barrett and Randle with two shooters and a defensive-minded big pays huge dividends. The emergence of Barrett as a genuine leader and floor general also opens up the door for Quickley, who is a talented but uneven playmaker, to eventually earn a larger role—especially if Quickley can become more dangerous off-ball.

The Point R.J. experiment may be dead, or at least lying dormant, but the results should continue to bolster Barrett’s confidence and growth as an all-around player as the Knicks gear up for their playoff push. And as the team moves forward into their post-Payton future, his continued development in that arena should allow them more creative choices with how they build their team.

Simply put, the better Barrett is as a playmaker, the better the Knicks will be. Thibodeau always seemed like the guy who could unlock this side of the young Canadian, the only question moving forward is: what level can they reach together?