What Went Wrong for the Knicks This Offseason? 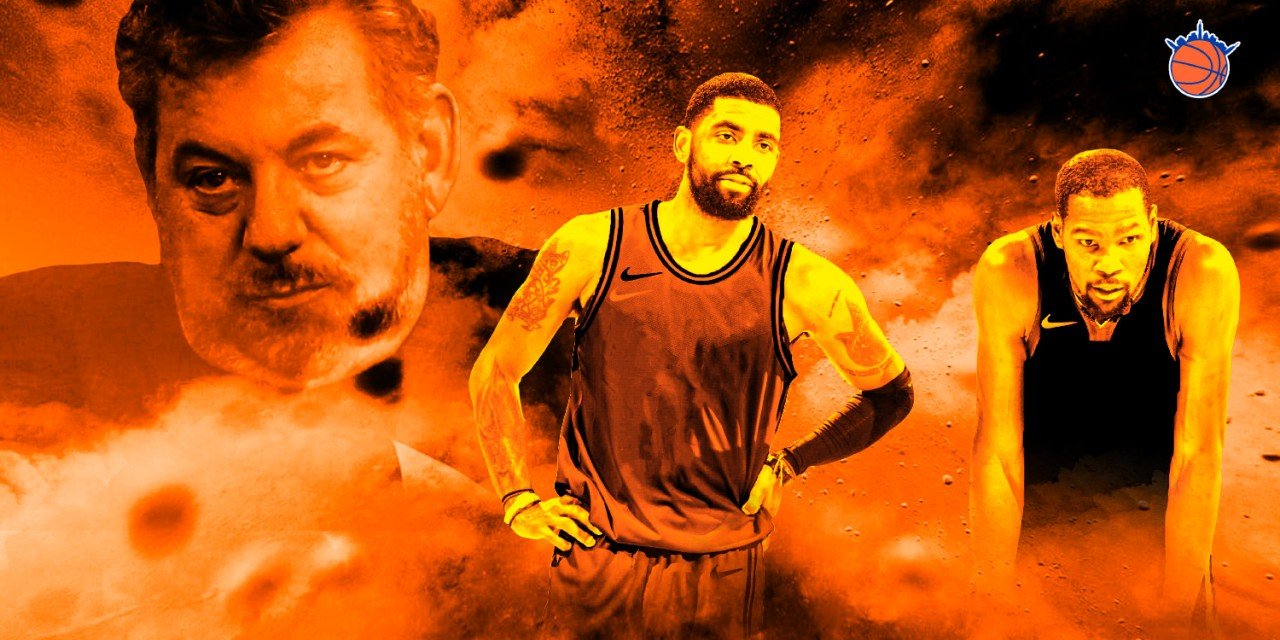 There are a number of ways to build a team—and the Knicks chose the worst option in an offseason filled with what-ifs.

With the dust nearly settled on another offseason, the time to reflect on moves made is upon us. The kids are roaring at Summer League, the cap space is just about gone, and the focus is now solely upon how new players will fit on their new rosters.

For the New York Knicks and their offseason exploits, it breaks down into two different sections: the failure to secure two stars and the subsequent moves in the aftermath.

The Knicks opted for a quantity over quality approach, adding six free agents and two rookies to their roster. There’s no expectation to run the Eastern Conference, or even make the playoffs this season, but merely to improve from their 17-win tally a season ago. The question is: did the Knicks go about that in the correct manner?

Failing to secure Kevin Durant and Kyrie Irving this summer would push back any team’s timeline, but when looking at the players secured this offseason, it’s tough to see how the Knicks had a good offseason, as they failed in three key areas.

Before the official opening of free agency, SNY’s Ian Begley reported that the Knicks were not open to taking on bad contracts for draft compensation. Begley did not specify whether the Knicks were willing to take back smaller, one-year deals. It was a worrying report that ultimately came to pass, as the Knicks opted this offseason to sign veteran free agents.

In an offseason headlined by two superstar trades to appease two superstar players, the Knicks effectively avoided that route all together. The Lakers largely used their young talent and future picks to secure Anthony Davis, while the Clippers took their top young asset—Shai Gilgeous-Alexander and five first-round picks, two from the Miami Heat—to secure Paul George.

New York didn’t have the assets to get either deal done, nor did they have the assets to effectively bounce back from a deal like that if they made it. This summer offered a step towards building a stronger cabinet of assets, and the Knicks politely declined.

Specifically, the two offseason salary dumps would’ve fit the Knicks perfectly: Golden State moving Andre Iguodala and a 2024 first-round pick to Memphis, and Miami moving their 2023 first-round pick to Los Angeles to shed Maurice Harkless. Both of those deals offered two defensive-minded players who could’ve upped the team’s ceiling for this season.

Even the smaller trade between Memphis and Phoenix would suffice. Memphis took on Josh Jackson, De’Anthony Melton and two second-round picks for Jevon Carter and Kyle Korver. Effectively, the Grizzlies took a former lottery pick as a flyer and got two picks for it.

The failure to both acquire players who could help them move up the Eastern Conference hierarchy, and build for the future, is a missed opportunity for the Knicks that could come back to bite them in future star negotiations.

The players acquired and the lack of creativity

The Knicks didn’t use any real creativity in their offseason haul to any create a stronger roster.

Let’s take a look at the players acquired:

On the surface, Julius Randle is their best player acquired, and the lefty should establish himself as a key weapon in David Fizdale’s offense. However, the other players in the class don’t make much sense for the Knicks when you dig through the offseason and where they stand in the Eastern Conference.

The addition of $26 million in backup big men is the most glaring. Gibson is a solid defender, a native New Yorker, and a solid veteran presence in the locker room. Portis is a young big man who has extended his shooting range the last two seasons, hitting 39% of his three-point attempts last year.

The Knicks needed some spacing and defense, but not at those price tags.

Why not split the two and go after Thaddeus Young (three-year, $41 million with Chicago) who offers a decent mixture of both? Same goes for JaMychal Green, who’s a bit older, but fits more of the need as a backup. Kevon Looney went for $15 million over three years with Golden State, while old friend Noah Vonleh went for the minimum to Minnesota.

There were more economical options available. Same goes for the wing players acquired—only, there were better options.

Both Bullock and Ellington space the floor but neither are creative handling the ball. More often than not, they’re players who thrive off of catch-and-shoot chances, thanks to someone with gravity creating an open look. For a pinch more, Jeremy Lamb—signed a three-year, $31 million offer from Indiana—would’ve been a better fit, thanks to his ability to defend.

The point guard market is the most confusing. Not only did they sign Elfrid Payton for $16 million over two years, but they gave him a chance to win the starting point guard role. Aside from Dennis Smith Jr.’s play recently, it would be very Knicks to bury the best player you received in the Kristaps Porzingis trade.

The most egregious issue here: why not use your cap space to be active in the restricted free agency market?

Outside of the addition of Randle, New York’s offseason haul was a lackluster set of role players that also revealed the front office’s lack of creativity.

Proper incubation of the youth

Another aspect of this poor season is how it affects New York’s younger talents. It remains to be seen, but as of today, several players appear to be moved to the side in an attempt to get better next season.

Kevin Knox was affected the most. The addition of Gibson and Portis effectively gridlocks Knox into the small forward position for most of his minutes—his least effective position. Knox, ideally, is a floor spacing power forward who could use spacing to his advantage.

Allonzo Trier and Damyean Dotson are two guards who will now share time with Ellington. Among those three, only one can defend and only one is adept at getting his own shot. This is before you get to rookie and number three overall pick R.J. Barrett, who seems set to get the majority of his minutes at the 2.

Dennis Smith Jr. is the young player already under the most pressure, due to Payton’s comments about getting a shot at point guard. Smith was already in a difficult position after a down season and now, the chance of seeing his minutes reduced is in play, a year before unrestricted free agency.

Besides the addition of Randle, the Knicks’ offseason doesn’t overlap well with the young players on the roster. Aside from there being too many players here, the Knicks completely ignored the defensive side of the ball, hoping Mitchell Robinson can clean up their mistakes and miscues.

There’s still time for New York to make a trade—they will probably need to complete one just to balance out their current collection of players. Still, it highlights the front office’s lack of understanding the players on the roster, the targets in free agency and what they truly offer.

The Knicks are aiming to be a better team in the 2019–20 season, and they couldn’t have picked a worse way to go about it. In an offseason loaded with expectations of Durant and Irving, the Knicks failed to secure their main two targets and took what many considered a safe route with role players under two-year contracts with team options.

While there are other ways to build a team, there is a base. New York had cap space to acquire future draft picks and future-proof their team, and they didn’t. The Knicks had a chance to gamble on some young talent, and declined. They went a safe-ish route, spending $70 million to win somewhere between 25 and 33 games next season, but with guys who probably won’t be on the next good Knicks team.

Time will tell whether it works out for New York, and whether the team will truly get things together before the 2021 free agency class or not. This offseason doesn’t appear to be a step in the right direction, however.

»READ: What does cap flexibility in action look like?