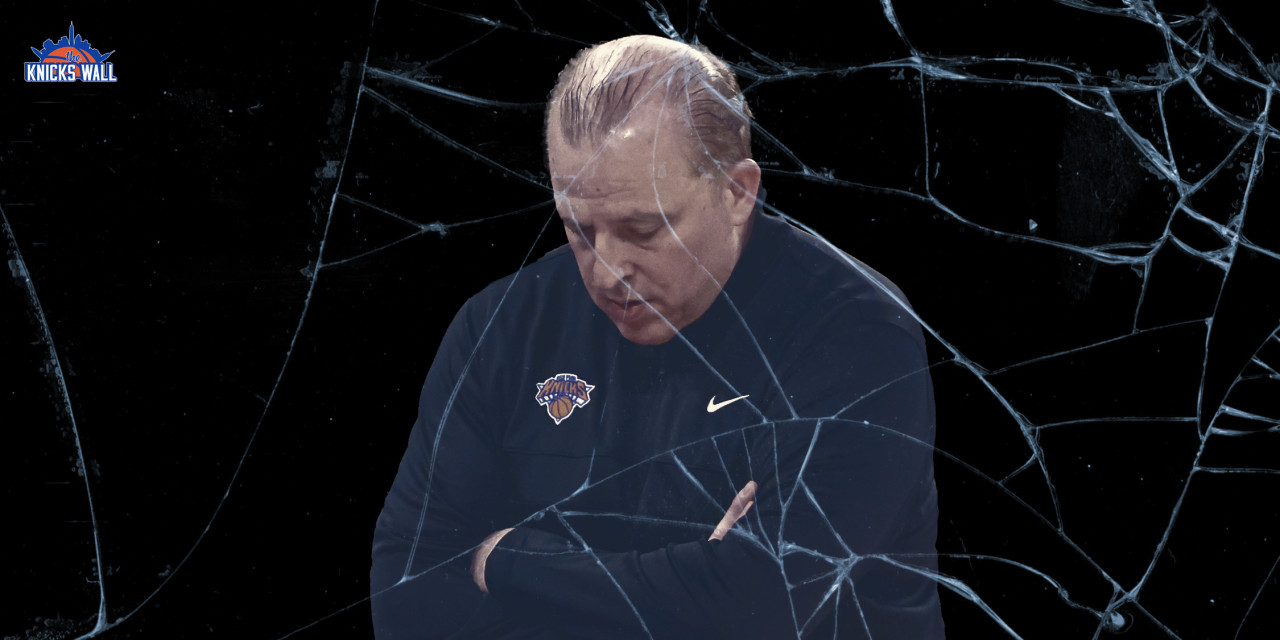 After a home-court-earning playoff finish last season, the 2021–22 Knicks have disappointed due to multiple factors influencing the team.

The New York Knicks have had an excruciating season. Everything that could have possibly gone wrong has. Nothing worked like it was supposed to and they failed to reach people’s expectations, performing worse than anyone would’ve thought. With fewer than 20 games left in the season and the odds of a playoff spot looking slim to none, it’s time to revisit some of the most glaring issues and things that went wrong none—from the things they couldn’t control to more self-inflicted wounds.

The season started promisingly; with a thrilling double-overtime opening-night victory on national television versus the Boston Celtics, the Knicks were off to the races with a 5-1 record to start the season. But then something wasn’t quite right. They were punched in the mouth by the lowly Orlando Magic and could never truly recover from what, at the time, was kind of a shocking loss and it sort of messed with their mojo. The Knicks continued to lose the games they should’ve won against perceived lesser teams by blowing leads or simply just not showing up. They fell into a hole that became too deep to climb out.

The Knicks have not had a winning record since January 15th, when they were 22-21, and have teetered around .500 for the majority of the season. Things hit the fan for New York just before the All-Star break and the subsequent games after, as they hit the skids and went on a seven-game losing streak dropping them to a season-worse 13 games under .500.

But the problems for the ‘Bockers are deeper than their win-loss record, it’s been one questionable decision after another from coaching to the front office.

Let’s go back to the summer when the Knicks brass gave out some questionable contracts. After an overachieving season by all accounts, the Knicks’ newly minted front office decided to bring back some core veterans that helped achieve their surprising fourth-place finish in the Eastern Conference; nearly all those moves have backfired except for Alec Burks, which, to his credit, has been durable but not as reliable as he was last season. The Burks re-signing made sense at the time due to roster construction and Burks’ projected role. Things began to dissolve after the fall of the point guards, forcing head coach Tom Thibodeau to play Burks out of position to compensate for a lead guard. Burks has been the only Knick this season to have played in all the games so far, a testament to him taking care of himself and staying ready for anything. Thibs even called him his “Swiss Army knife”—unfortunately for him, playing out of position hasn’t yielded the same results that made such a successful player last season.

After handing Nerlens Noel a very questionable three-year, $32 million contract, he’s been virtually nonexistent due to a persistent knee injury; though players rarely play full seasons these days, Noel has never played a full 82 games in his career. In his nine seasons, he’s only cleared 70 games twice. This season, he’s played in 25 of them and it doesn’t look like Noel is coming back the rest of the campaign. It’s been the worst start imaginable for an injury-prone player on a new deal that many consider an overpay.

Next up, the Derrick Rose contract: three years for $43 million. Rose was a godsend for the Knicks when he was acquired midseason in 2021. He was a spark plug off the bench and carried the team on long stretches when others struggled. The Knicks’ reserve unit was integral in their run late last season and Immanuel Quickley greatly benefited from playing alongside the former MVP.

This season as well—the bench mob, led by Rose, was keeping the Knicks alive in games for a long stretch as the starters struggled early on. Earlier this season, New York’s second unit was a top-three scoring bench in the NBA; they currently rank 22nd. Yes, the drop has to a lot with Derrick Rose missing due to his surgeries, but relying on Rose all season to play heavy minutes and expecting him to recreate his near Sixth Man of the Year campaign from last season was unrealistic. With his age and his injury history, he was bound to break down and that’s precisely what happened. Thibodeau, a coach known for squeezing every bit of juice out of players, doesn’t subscribe to ideas like rest or load management. Not giving Rose maintenance days may have contributed or at the very least accelerated his downfall.

Derrick Rose has only appeared in 26 games this season. If the Knicks hope for any semblance of a fruitful investment, they need to rethink how they’re going to implement Rose going forward because they’re paying him a lot of money at his age and condition.

Now, for possibly the worst part of the summer, the Knicks’ “big splashes”—Evan Fournier and, to a lesser extent, Kemba Walker.

First, Walker was a sentimental signing, a low-risk high reward situation that didn’t break the bank. The Bronx native’s stint with his hometown town team has been nothing short of a roller coaster; he had good stretches and bad ones, exemplified best by an unexplained nine-game benching followed by an impressive stretch of December games ending in what will most likely be his most memorable moment as a Knickercoker, his Christmas Day triple-double. Kemba’s up-and-down season will not be soon forgotten, but it was undeniably not a good fit. He never found his footing on a clunky roster playing a bigger role than he should have. The Knicks christened Walker the starting point guard knowing he was going to need days off and could not play in back-to-backs. His role never made sense and rumors of tensions with Coach Thibs swirled all season to point of them not talking. Last month, the Knicks and Walker mutually agreed to shut him down for the remainder of the season so he can prepare for next season.

And finally, Evan Fournier, the second-highest-paid player on the team, has been a conundrum all season. The Knicks bid against themselves and it looks like they may have lost. Fournier was supposed to be the scoring relief when Julius Randle was struggling and he has not lived up to his end of the deal. Force-feeding him early was the wrong decision and, in turn, hindered RJ Barrett’s eventual progress in the process.

Fournier was signed to be a staple in the offense and it’s just not been the case. His inconsistency has been a problem, and it is impossible to tell what he’s going to give on a nightly basis—if he’s not scoring, he’s probably not contributing much else. January and February treated Fournier much better, as he posted his highest scoring totals and best shooting percentages. Even though it’s still early, Fournier has regressed in March; his scoring has dropped significantly and he’s averaging just 10.2 points per game. His shooting has also suffered in the new month, a season’s low 36.0% from the field and 30.3% from behind the arc.

You can’t put it all on free agency or new Knicks though. The Knicks’ main man Julius Randle has struggled all season. Randle hasn’t been able to replicate his season from a year ago where he won Most Improved Player, earned his debut All-Star selection, and was an All-NBA Second Team member. Randle’s struggles have boiled over to beefs with the media and fans alike. His now-infamous thumbs gesture was the topic of conversation for days and was reminiscent of the New York Mets’ thumbs down controversy during the baseball season. Randle’s struggle may be steeming from getting more attention from teams, the pressure of his new contract, or his ability to control his emotions on occasion.

But even with all that’s gone sideways for Randle, he is still leading the Knicks in most statistical categories and he is still liable for a big night at any moment. With the emergence of RJ Barrett relieving the pressure Fournier couldn’t, a more loose Randle should start to regain his All-Star form. Barrett and Randle thriving together is instrumental to future Knick success.

We can move on to Coach Thibodeau and his shortcomings. Thibs’ stubbornness has cost the Knicks dearly this season. Refusing to make changes when players are struggling, almost no in-game adjustments, and playing favorites despite preaching a meritocracy. The only time the reigning Coach of the Year makes any significant change is when his hand is forced due to some unforeseen injury (see: Randle-Toppin minutes or, more recently, Cam Reddish or Barrett at the 4). Thibs’ reliance on undeserving veteran players despite having more than capable young players has been a maddening feature this season. The Knicks are coming off a 3-18 stretch before their current three-game win streak and the head coach didn’t make one adjustment to the lineup. Former Knicks coach David Fizdale was fired after a 4-18 stretch—Thibodeau most certainly has a longer leash because of who he is and the Knicks’ recent success, but patience is running thin.

The final nail in the Knicks’ coffin was the front office standing pat at the trade deadline. They just didn’t improve a team that needed improving and they still haven’t said why. Neither team president Leon Rose nor general manager Scott Perry have addressed the media and fans to quell concerns since the deadline. After trade deadlines or transactions most teams, across all sports, traditionally address their fans and the media to explain their moves or lack thereof, but the Knicks brass has not given any explanation a full month after the fact. It’s quite disturbing to keep fans in the dark when the team has underachieved at such a massive scale.