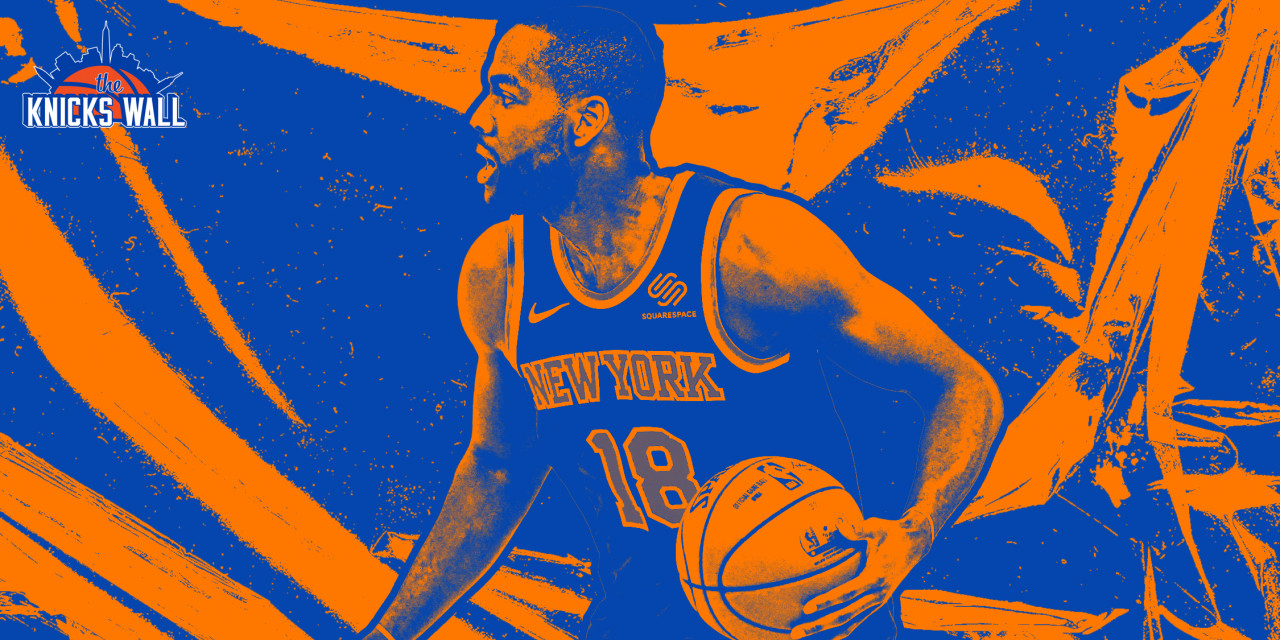 Alec Burks’ off-the-bench shot creation was a pivotal part of last season’s Knicks squad. For this year’s team, Burks can let others do the work.

After Alec Burks averaged 12.7 points and shot 41.5% from three this past season, the New York Knicks decided to bring him back on a three-year $30 million dollar deal. While the then-29-year-old has had his moments in New York, including a 27-point Game 1 performance versus the Atlanta Hawks and a 30-point, 10-rebound performance versus the Spurs towards the end of the regular season, it came as a bit of a surprise that the Knicks chose to bring him back over Reggie Bullock.

Bullock, who signed with the Mavericks this offseason for three years, $30.5 million, started 64 of his 65 games played last season and shot 41% from three. Burks only started five of his 49 games. Clearly, with the Knicks signing Evan Fournier, they chose Burks’ scoring versatility over Bullock’s 3-and-D style.

However, Burks wasn’t re-signed by the Knicks to be the shot-creating guard/wing off the bench that he was last season. With the additions of Kemba Walker, Quentin Grimes, and Miles McBride to Derrick Rose and Immanuel Quickley—last season’s bench mob—New York will have a plethora of shot creators on the floor at all times.

Last season, the Knicks just had Elfrid Payton as the only other point guard to go along with Rose and Quickley. Due to Payton’s inability to create his own shot, his minutes decreased drastically as the season went on and into the playoffs. This led Burks to play some combo guard—and even becoming a player the Knicks relied on to take over games, as mentioned earlier.

This was a major flaw of last year’s roster. A four-seed in the Eastern Conference playoffs shouldn’t have Alec Burks as one of their primary shot creators.

As a result of the depth added by the Knicks this offseason, expect Burks to revert back to a role of being a spot-up shooter off the bench. This will certainly be a more natural role for Burks, one that he played when he jumped around on five teams in three years from 2018–20.

He will be the Reggie Bullock of this bench unit. Rose and Quickley will handle the ball and provide most of the scoring, while Burks will provide spacing and an occasional open trey. The only time you will see Burks in the role that he played during the 2020–21 season will be if the Knicks are plagued by injuries, or decide to rest starters for a game. His ability to play the role of shot-creator off the bench is likely why the Knicks chose him over Bullock, who isn’t as good of a scorer.

When you break down the advanced stats, it makes perfect sense for Burks to play the role of a spot-up shooter.

As shown in the chart above from Basketball-Reference, Burks shot 47.3% on corner threes this past season, which was the highest percentage of his career. Additionally, 30.1% of his shot attempts were on corner threes, which was his highest volume since 2016–17 when he was on the Jazz.

The Knicks are going to use Burks to stand in the corner and shoot three-balls for the majority of his minutes. This is a role that New York probably hoped Knox could play at some point, but based on last season, that era is probably over.

Increasing, Burks’ corner three attempts should do wonders for the spacing of the bench unit. It’ll allow Rose and Quickley to operate with no problem. One underrated aspect of this is that it’ll also give Obi Toppin more space to operate.

As we saw in the Summer League, the Knicks are going to get a lot more creative with the way they use Toppin. Expect them to get Toppin cutting to the basket plenty, and having Burks as a shooting threat in the corner will open up those lanes. There’s a chance that this bench unit could be one of, if not the best in the NBA.

Referring back to the chart above again, 68.6% of Burks’ three-pointers were assisted last season. For the first three years of his career, at least 82% of his threes were assisted. With Burks moving away from shot creation and more to catch-and-shoot, expect this number to climb back up towards 80%.

Ultimately, this role change for Burks will likely result in an increase in his efficiency and efficiency for the bench unit as a whole. Any time you can take the best aspect of a player’s game and increase its volume, it’s a good thing, and that’s what the Knicks are doing. If it backfires, then Burks is on a team-friendly contract and can easily be moved ahead of next season or at the trade deadline.