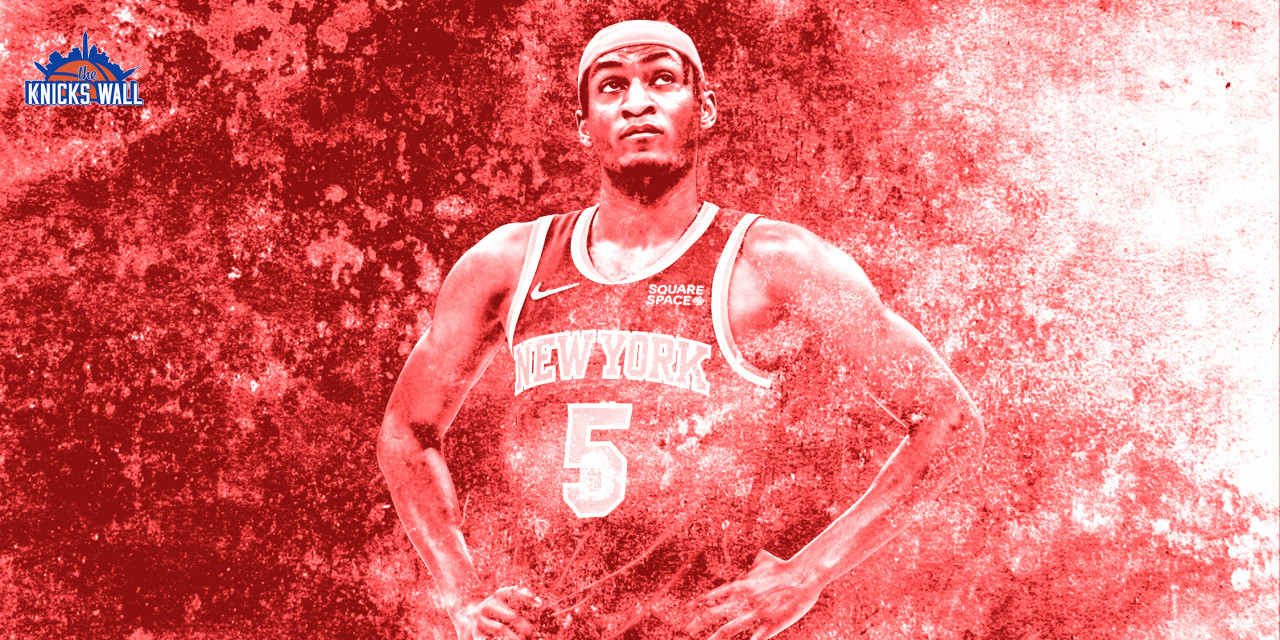 Immanuel Quickley captured the hearts of Knicks fans as a rookie. In just one season, he seems to have lost them. He has to get his confidence back to help New York turn its season around.

What’s the deal with Immanuel Quickley? New York Knicks fans here, there, and abound have likely asked themselves that question numerous times this season.

It seems like Quickley has been in his slump since the season began. In his first 10 games of the new campaign, he failed to score more than 10 points seven times. Quickley hasn’t been able to maintain a consistent rhythm. After his best game of the season where he scored 24 points and had a career-high seven three-pointers, he tested positive for COVID-19 and had to enter the league healthy and safety protocols—forced to be sidelined for four games, he was unable to build on his great performance.

Quickley began his career as if he was shot out of a cannon. After cracking the Knicks rotation in his rookie season with captivating play, the University of Kentucky product has struggled to recreate the excitement he did last season. It seems like the Knicks’ second-year guard is going through the proverbial sophomore slump. Unfortunately for Quickley, he’s scoring fewer points and shooting at lower percentages. His diminished production has understandably left him out of the NBA Rising Stars Game after getting snubbed last season.

As a player who made a name for himself with lights-out three-point shooting, Quickley hasn’t had the same level of success for distance during his second season. As a rookie, he shot 38.9% from long range. This season, he’s only shooting 33.1% from three. As a player who’s heavily dependent on his shooting, it’s hurt his second year of development. Before Thursday’s Warriors matchup, Quickley has attempted 439 total shots from the field, per NBA.com. Of those attempts, 251 have been three-point tries—that’s a whopping 57.1% of his total field-goal attempts coming from behind the arc.

Quickley also likes to shoot from a farther distance, as 191 of those 251 three-pointers have been shot from 25 feet or further. Lower percentage shots are counter-intuitive when players are trying to break out of scoring slumps. It’s usually from a much closer distance to the rim that they begin to regain their confidence, something Quickley rarely does—not because he can’t, but because he just chooses not to. From midrange (10-to-14 feet from the basket) Quickley is shooting a decent, even 42.0%. The closer he is the more efficient he becomes, but he’s not doing it enough.

The Knicks usually use IQ as a primary ball-handler when he’s in games and sometimes he tries to force the action. Part of that is his age and the other part is the added pressure of a once prolific now diminished bench unit. Even though his passing is much improved Quickley isn’t much of a shot creator and that has a lot to do with him not attacking the rim like he should, by drawing defenses in for open shooters. On the season, he has only attempted 43 layups, he’s made 21 of them, which is good for a respectable 48.8%. With such a high success rate, it’s a real mystery as to why he doesn’t do this more.

Last season, Quickley showed off his prowess in the painted area by displaying a near-automatic floater, a weapon any good lead guard has in their repertoire. Conventional basketball wisdom will tell you that if you can attack the goal, you will generate better scoring chances for yourself and your teammates. Another reason for Quickley to look to penetrate is his elite free-throw shooting. Last season he shot 89.1% from the line, this season he’s shooting freebies at an even greater clip, 91.2%. Attacking the rim more would earn him more chances and sometimes to get going, all you need to do is see the ball go through the net.

With outside shooting taking the hit it has Immanuel Quickley must employ these tactics with more frequency. His insistence on continuing to chuck up more than half his shots is hurting him and turning him into an inconsistent player. For being a smaller guard, Quickley is surprisingly efficient in the restricted area as he’s converting 54.8% of his attempts. But again, he’s not utilizing this to his advantage enough. Quick is much more than a pull-up three-pointer shooter—he can’t continue to pigeonhole himself into that style of play when he has shown his capability to do different things.

The Knicks may also need to consider playing Quickley more with the starters, more specifically Julius Randle. Randle has assisted on Quickley’s buckets more than anyone else on the team. Now would be the perfect time to make a change to the starting lineup that doesn’t involve Alec Burks. With Kemba Walker being a shell of himself and Derrick Rose’s prolonged injury, Quickley should get an opportunity to start, which would open the door for other players to crack the rotation. Allowing him to start would relieve some of the pressure he feels to produce as the first man off the bench—a task left to Rose before he went out for his ankle surgery.

New York could also give Quickley a break and sit him a couple of games to regain some of his composure but that isn’t a realistic option for a team that’s reeling and needs all the help they can get. There isn’t a perfect solution to fix IQ’s woes, but the Knicks have options in how they’d want to approach things. Doing the same thing hasn’t worked for 54 games.

In an ironic way, Immanuel Quickley is a microcosm of how this team and coach Tom Thibodeau have done things this season, refusing to try different things that have proven to work before. If Quickley is going to bust out of his sophomore slump, he has got to realize his strengths.

»READ: Knicks tab pace as key to turning season around in win over Kings