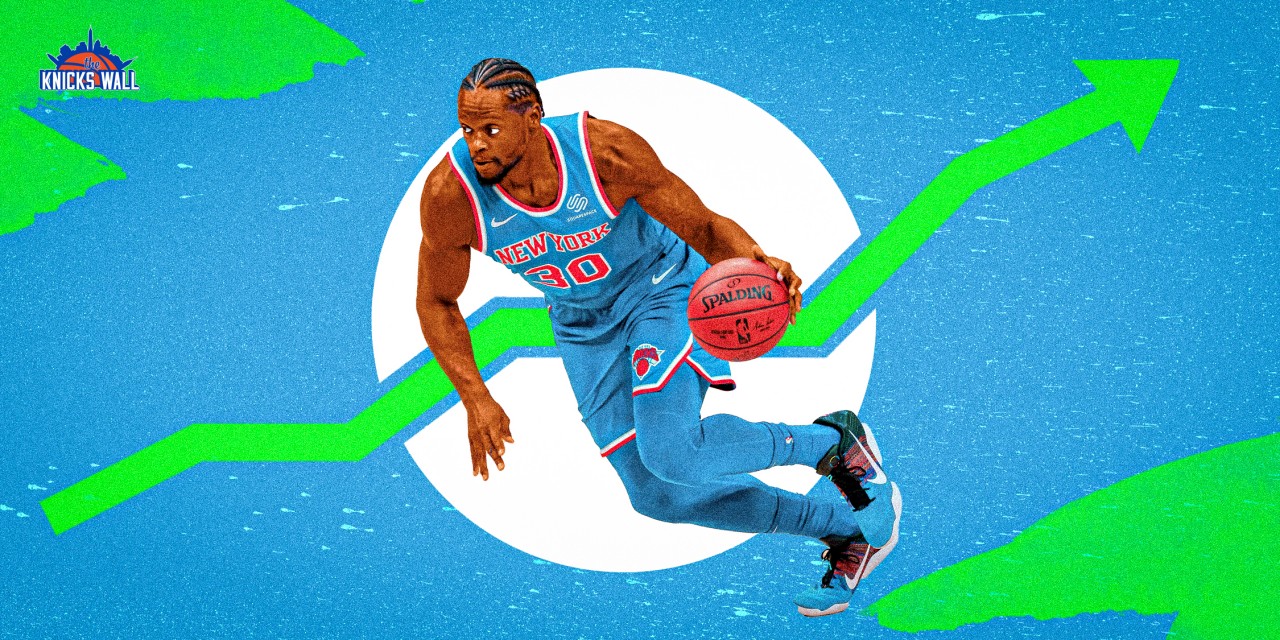 In the midst of a career year, the Knicks must determine whether Julius Randle is more valuable as a trade chip or playoff push contributor.

Julius Randle is having his best statistical season, his first under Tom Thibodeau, and is stuffing the stat sheet with career highs in points (22.7), rebounds (11.3), three-point percentage (34.8%), and attempts (3.8).

He’s helping the New York Knicks stay in the playoff hunt this season (despite a recent slide), and is part of why the team is somewhat competent relative to past seasons.

It’s obvious that Randle isn’t the future of the Knicks—that’s a title for some of the younger players like R.J. Barrett, Immanuel Quickley, someone who’s currently on a college roster.

With career highs almost all over the board for Randle, it might be time to start looking at his value from a trade perspective. Can he add something to a contender or more solid playoff team that could net serious value? Let’s look into what he’s giving the team so far.

Like almost every player under Thibs, he’s averaging a career-high in minutes per contest at 36.8, but even when looking at his production per 36 minutes, it’s mostly up from prior years.

Firstly, the best thing you can say about Randle this season is that passing it to him in the post isn’t like passing to a black hole. He has realized that he can pass and is nearly doubling his per-game assist average on the season prior to his 28.1 assist percentage, only trailing Nikola Jokic and Draymond Green—not bad company.

The Knicks are even spicing things up a bit and giving Randle the freedom to dribble the ball up, and while not exactly initiating the offense like a floor general, the team’s trying to see what he can do with his gravity early in a possession.

This was highlighted when he racked up a triple-double against the Cleveland Cavaliers.

Teams aren’t exactly lining up trying to trade for or sign a player who had blinders on in the post. Randle’s growth in passing out of the post and off drives makes him a much more attractive addition to a potential team.

Unfortunately, building on his first season with the Knicks, his game is moving away from what you’d expect him to be good at: scoring inside and using his strength.

He’s playing with more finesse, taking 43% of his shots from the midrange (going into the Portland game), which puts him in the 86th percentile among all bigs when using Cleaning the Glass’ metrics.

Where’s he pulling those shots from? Well, he’s taking a career-low (excluding his rookie season, one game) percentage of shots at the rim, 36%, a bottom-third mark for bigs this season.

And when he takes shots at the rim, he’s well below average among big men, making 57% of those shots, good for the 21st percentile.

Yes, he’s near the top of the league from the midrange, making 52% of his long two-pointers, but we’ve all seen the Kirk Goldsberry graphics that illustrate the league is moving away from midrange. It might be hard to sell a team on a player who’s moving further away from the rim.

Randle with the sweet baseline turnaround to get us started in the second half pic.twitter.com/4Qxg6BE1W1

But enough about the offense. Looking at the other side of the ball, Randle has obvious issues off the bat: at 6’9”, he’s undersized as a center and is too stocky and slow to chase quicker power forwards around.

He’ll look fine in matchups where opponents are going big, but in the playoffs, he could get exposed. That isn’t the be-all and end-all; it’s not like poor defensive players or undersized players don’t get a run in the best matchups. Teams just focus their attention on covering for them.

Surprisingly, Randle is having his best defensive on/off season, according to Cleaning the Glass, keeping opponents to 1.6 fewer points below their average when he’s on the court. What’s even more surprising is that he’s not above average in terms of stopping opponents at the rim (opponents shoot +2.6% better when he’s on the floor), but he’s bringing opposition three-point shooting down at an average level.

As a team, the Knicks are giving up the fourth-highest number of shots behind the arc while opponents are making them at the lowest rate in the league, 5.4 percentage points lower than league average. Considering the number of shots opponents are taking, this could be a slight outlier, especially since dunksandthrees.com gives them the 18th-hardest schedule thus far.

The league might have to wait for a bigger sample size to see how real Randle’s numbers are. That could be the pessimist in me not believing in his defense, since he hasn’t had an overall positive season until this one.

At the end of the day, is the juice worth the squeeze for Julius Randle?

Short answer: no. If a contender wants to add him to their roster, they might be looking for a change-of-pace, do-it-all-off-the-bench kind of big man, similar to what he was supposed to be in his lone season with the New Orleans Pelicans before that situation got icky.

Enes Kanter gets minutes in the playoffs, and NBA Twitter spends most of its energy telling whoever the coach may be to sub him out. Is that the future for Julius?

If so, he might be better suited racking up triple-doubles and being a fun roll guy for Quickley, Barrett, and hopefully the next young prospect to join this team.