What’s the Point? The Knicks Need to Do Something at Point Guard 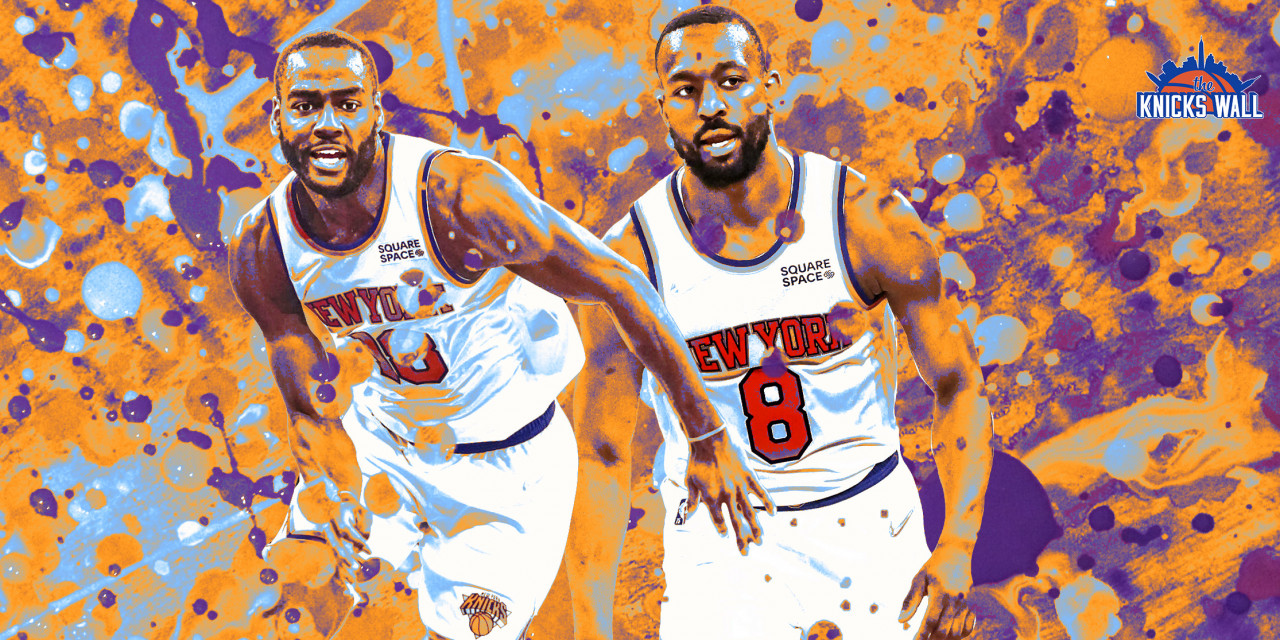 The Knicks have to do something—anything—to address their point guard woes. Tom Thibodeau has plenty of options.

Tom Thibodeau has watched his second season in New York sink slowly, mostly at his own doing. The Knicks entered the All-Star break at 12th place in the Eastern Conference at 25-34, with no hope on the horizon.

In their final three games before the break, the team blew three 20-plus-point leads, all versus teams that were missing their best players. The common theme in each collapse was the fourth quarter scoring falling off a cliff, with the Knicks failing to score 20 points in the final frame of each contest.

As has been the case in years past, point guard remains the key trouble spot of the offense. The plodding pace, poor shot selection, and lack of ball movement all circle back to the fact that the team has no floor general in the waning moments.

Kemba Walker is either too washed beyond saving or coincidentally going through the worst season of his professional career. The eye test suggests both are occurring simultaneously. Walker is neither scoring nor dishing, averaging just 11.6 points and 3.5 assists per game while offering no value on the defensive side of the ball.

To say “Point Burks” has gone poorly would be to say the Fyre Festival was not the luxurious celebration of music it was advertised to be. Now, to defend Burks for a brief moment, he is not a point guard. Thibodeau has opted to use his Swiss army knife as his main weapon, and the results have been hellish.

The starting lineup gains little speed when Burks is swapped in for Walker, leading the league’s second-slowest offense. His greatest contribution to the team thus far has been availability. On the court, he has struggled to connect on shots, with a lot of attempts falling flat at the front of the rim.

Despite his struggles, Thibodeau believes the Knicks have the best chance to win when he is on the floor.

Thibodeau said he used Burks over Quickley at PG for most of crunch time bc, "Alec’s been one of our best players all year. He’s shot it in the 40s from 3 & he can playmake. He’s got size. But I love the way Quickley played today. I thought he was aggressive, attacking."

Such a belief may have been true as recently as the start of this season. Right now, however, it sounds like a statement from a head coach who has run out of options and is waiting for his golden goose (Rose) to return. Since the new year, Burks has been an objectively bad scorer, shooting 33.1% from the floor and 30.7% from three-point range.

He is averaging 9.3 points per game and dishing 3.3 assists in 26.4 minutes per night, a fair amount of those minutes coming in crucial times. Clearly, a change is needed. Walker and Burks as the top two options at lead guard is a recipe for failure.

There are more problems with this roster that need attention, but fixing the point guard problem is not only doable but one of the key reasons to dip back down to the league basement.

Thibodeau now finds himself backed into a corner, with William Wesley lurking, as the organization finds itself at a crossroads heading into the second half of the season, with three options to address his greatest on-the-court issue, starting point guard. He can go the predictable route, the smart route, or the (unrealistic) fun route.

Rely on the Ride or Die

Anyone familiar with Tom Thibodeau knows that his being is the definition of insanity. From his first day as a head coach in Chicago, he has done the same thing every day, used the same exact thought process for every situation. Understanding that, there is only a clear adjustment Thibodeau will make if he makes an adjustment period: start Derrick Rose.

Every high point of Thibodeau’s head coach career involves Rose. In his only playoff appearance in Minnesota, Rose was there. In his two Coach of the Year seasons, Rose was there. It is easy to see why the Thibodeau and Rose pairing is a ride-or-die relationship.

The Knicks were 11-15 with Rose in the lineup and have gone 14-19 without him. When Thibodeau initially made a change at starting point guard, it was Burks who got bumped up. The reason was based on logic for once. Rose captained a second unit that was among the best, if not the best, last season.

The second unit is also where Rose feels most comfortable at this point in his career. That will not stop Thibodeau from turning to his dearest friend in his greatest hour of need. Remember, when Elfrid Payton finally became too much to bear, it was Rose who Thibodeau turned to.

Bumping Rose could work for the simple fact even at less than full strength he is the best point guard on the team. The only downside/question mark is workload. Can Rose jump in immediately to give 25-plus minutes a night in a win-now mode?

The smarter option would be to slide Rose into the role he thrived in last season, and he can oversee the reconstruction of a second unit with some serious two-way potential in the form of Quentin Grimes and Cam Reddish.

Immanuel Quickley has not made a compelling case for a promotion. The team’s spark plug has been erratic in his sophomore campaign, and ice-cold lately. Quickley snapped out of an arctic stretch right before the break. Before his 18-point night versus the Nets, Quickley had shot 28.2% from the field and an even cooler 24.2% from deep in his previous 15 games.

A gambler who can drive you mad with his shot selection, when that shot isn’t falling, patience can wear thin quickly with Quickley. Thibodeau trusts Quickley enough to play him on the ball this season. The time has arrived to take the training wheels off because Quickley represents the greatest possible solution available to Thibodeau at the moment.

Starting Quickley is the happy medium of assessing for the future and remaining in the present. His chaotic tendencies could be the shot of energy the sluggish starters need. One undeniable dynamic Quickley brings to the table is the ability to run and gun.

Here we have a perfect example of why Obi Toppin needs to stay on the floor and why the Knicks must play fast pic.twitter.com/cwP0cKS5MD

With Walker and Burks, the Knicks play a lot in the halfcourt which has led to an overreliance on connecting on three-pointers. Plugging Quickley in keeps the long-range threat there, with the bonus of someone who generates easy buckets for Mitchell Robinson that are far and few between at the moment.

QUICKLEY UP TOP TO MITCH pic.twitter.com/gwK79lfWPa

The most puzzling part of Thibodeau’s unwillingness to start Quickley is the defensive upgrade he would be. Walker is a subway turnstile on defense. Burks is a solid defender, but a wing forced to match up with speedy point guards can always get dicey, especially against the cream of the crop.

Quickley’s agility and 6-foot-10 wingspan give Thibodeau the foundation to create a defensive demon.

Do NOT sleep on Immanuel Quickley’s offseason work pic.twitter.com/PSfwQ8pD9P

One thing with which Quickley has been consistent in his career is putting in the work. The only way to see what Quickley’s true ceiling is is to give him more responsibility.

There were already a few reasons to take it slow with Quickley before the season. Now, it would feel foolish to not play him.

When a person is pushed to their absolute limit, going crazy can never be ruled out. Deuce McBride represents Thibodeau embracing anarchy.

McBride has left strong impressions in limited court time. He had an infamous +39 game against the Pistons in which he scored zero points. His best performance to date, however, came when he saw a career-high 35 minutes against the Rockets. McBride scored 15 points on 54.5% shooting, dished out nine assists to go along with four steals.

It was a masterclass of the possibilities that exist when McBride is on the floor. Playing time has been the toughest hurdle for him. He has not played meaningful minutes since the blowout loss in Toronto back at the start of January. Luckily, Deuce has made Westchester his playground as he bides his time for a role.

In four games with the Dub Knicks, McBride is averaging 29.5 points, 10.3 assists, 6.3 rebounds, and 3.0 steals per game. Dominating the G-League is not predictive of superstardom, however, it is more than enough evidence that his talents can be put to use on the 12th best team in the Eastern Conference.

McBride’s immediate contribution would be adding some energy to the defense. One major weak spot of the Knick defense is the lack of turnovers generated. McBride brings nothing but energy to the floor.

Similar to his fellow rookie Grimes, McBride has the confidence of a veteran. He has no problem dropping in at a moment’s notice and fitting in like it is an everyday thing.

“This unit looks like they’ve been playing together all year.”

7th assist on the night for Deuce McBride pic.twitter.com/UZ1bpx8UIu

Any logical team at this point in the season would be giving McBride some sort of role if they were in a similar skid. It makes as much sense as Grimes and Evan Fournier swapping spots in the starting lineup. A natural progression of a Quickley promotion would be sliding McBride in with the reserves.

Barring injuries or a coaching change—the chatter of the latter continues to increase—McBride is still in line for spot minutes. But given Thibodeau’s desperation, no option can be completely shelved.

Whatever Thibodeau ultimately decides to do, he must do something. The Knicks front office might need to intervene and buy out one or both of Walker or Burks and pick up a different veteran point guard to force a change. It is undeniable, something does have to change, otherwise, the team will find itself back on the hamster wheel it thought it left behind after last season.