What’s the Verdict on Obi Toppin? 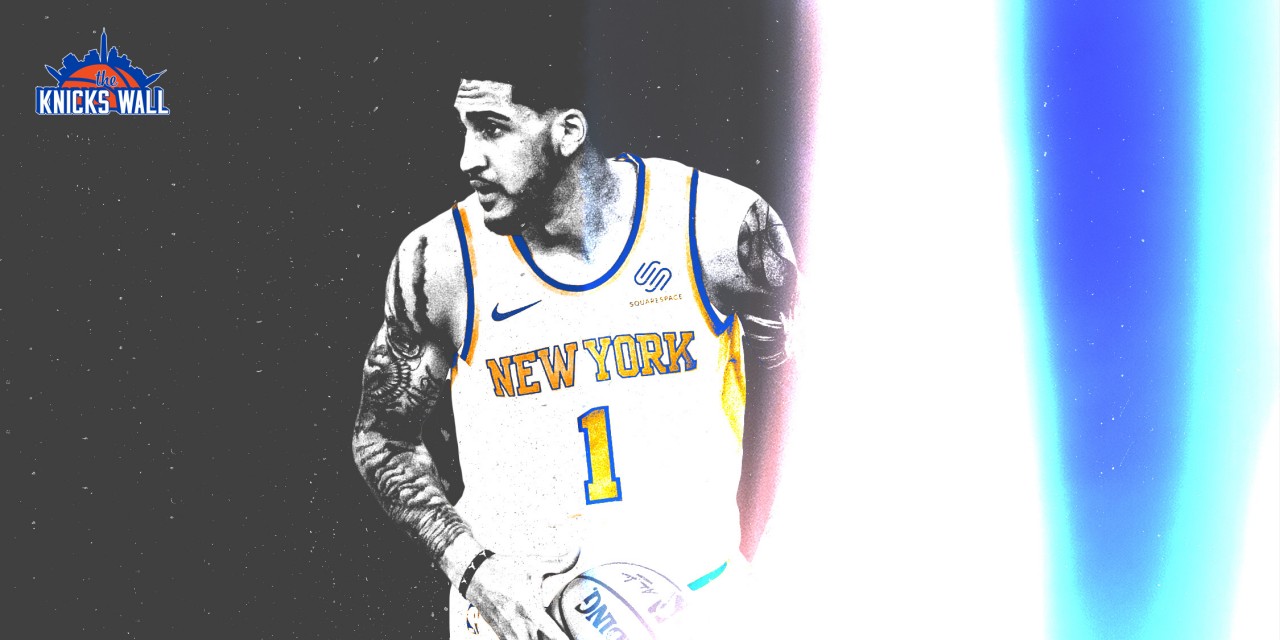 Hometown heroes are a rare and celebrated breed in the NBA. Indeed, one of the contemporary generation’s most noteworthy is Derrick Rose during the Chicago native’s time with the Bulls.


Now, a new born-and-raised Knick fits this bill as well. Obi Toppin grew up in Brooklyn, and his zest and affection for Knicks basketball were on full display from the moment he heard his name called.

Toppin’s post-draft interview was brief but unforgettable. Tears of joy poured down his cheeks for all but the entirety of the three-minute conversation with ESPN’s Malika Andrews. “Me repping my city—it’s amazing,” Toppin said when asked what it meant to be selected by the Knicks. “A lot of people pray to be in this position, and I’m not going to take it for granted. I promise you that.”

Approximately four months later, more than half of the 2020–21 campaign is in the rearview mirror, and we have the sample size necessary to gauge Toppin’s maiden season in the Big Apple.


In December, FanDuel ranked him as having the second-best odds to win the coveted Rookie of the Year award, behind only LaMelo Ball, who has starred out of the gate in Charlotte. Has the collegiate scoring machine lived up to such grand expectations?

In a word, no. But it would be foolish to label him a bust. He’s playing behind an All-Star, All-NBA caliber player in Julius Randle. Patience is a virtue, and one worth exercising if perturbed by Toppin’s unspectacular stats. The opportunity for him to truly shine for this team hasn’t come yet. But it’s only a matter of time until it does.

Let’s delve into the good and bad of Toppin’s rookie season.

Toppin is a dynamic athlete for a 6’9″ power forward. He plays above the rim and has solid lateral quickness. Half of his 38 made field goals inside of eight feet have been dunks, and exceptional off-ball movement is the catalyst behind many of these point-blank opportunities. Unsurprisingly, the neophyte hasn’t had many plays run for him this season—rather, Toppin serves as an opportunistic scorer. He catches defenders ball-watching and darts to the baseline or rim for the simplest, yet most effective shot in basketball.

Opponents swatted only one of Toppin’s 21 dunk attempts on the season. Comparatively, they rebuked seven of Toppin’s 30 layups, more than 23% of them. Toppin is a dramatically superior threat inside when he’s showing off his hops and heading to the rim with his sights set on a poster. If he’s not attacking the net with purpose and springiness, he’s prone to get swallowed up by the defense. Toppin’s lack of creativity as a below-the-rim finisher has undeniably come back to bite him at times. But in totality, shooting 19-for-21 on dunks this season, Toppin’s had a promising start to his career in terms of scoring at the cup.

Kevin Knox UP TOP and OBI TOPPIN THROWS IT DOWN 🔥🔥🔥🔥 pic.twitter.com/6m8gJgh76a

Some of you may have rolled your eyes at the fact that I included Toppin’s three-point jumper as one of his strengths. Glancing at his 29.8% clip, it’s easy to write off his long-range shot. But Toppin’s maiden season shooting the three-ball has been a tale of two proximities: corner and non-corner treys.


From the corners, well, the results have been unfruitful. Just how unfruitful? Of his 20 tries from said area, only three have found nylon.

Non-corner threes have been a more encouraging story for Toppin. Sure, 26 threes isn’t an enormous sample size, but none of Toppin’s stats are. No matter how you slice it, 10-for-26 shooting or 38.5% is tremendously accurate. Don’t let the 29.8% overall clip cloud your judgment: Toppin is a capable long-range threat at the NBA level. His corner three woes will level out as this season progresses, and his non-corner percentage may dip a bit as well. However, there’s no reason to believe he can’t make his threes at a league-average rate.

Let’s round out the favorable aspects of Toppin’s play by paying homage to his offensive rebounding. Pulling down extra possessions may be his most unheralded skill and one that flies under the radar. The NBA has gravitated away from this feature of the game, but the Knicks are bringing it back in style, with Mitchell Robinson, Nerlens Noel, and Toppin all being on-going threats for second-chance points. According to Cleaning the Glass, Toppin’s offensive rebounding percentage is a commendable 3.3%, the highest of any Knick who plays forward, and 59th percentile compared to his positional counterparts across the association.

Toppin isn’t your traditional offensive rebounder who plants himself in the paint and outmuscles opponents; he uses brains instead of brawn to grab his teammates’ misses consistently. An illuminating statistic, Toppin’s average offensive rebound distance is 6.1 feet from the basket. This suggests chase-down rebounds have been the rookie’s method of choice. His feel for when to dart baseline for a rebound is exquisite, and he exposes teams who fail to put a body on him.

Toppin’s ineptitude as a defender both on and off the ball has been well-chronicled, dating back to his swan song at Dayton. If it weren’t for his collegiate shortcomings on this end, perhaps he would’ve received serious attention as a top-three pick. After all, he entered the draft universally recognized as the most NBA-ready offensive talent.

It’s commonplace for rookies to suffer growing pains when transitioning from college players to the best in the world. Schemes are naturally more complex, and the NBA’s talent level is leaps and bounds ahead of college. But even for a youngster, Toppin’s awareness and effectiveness while attempting to get stops have been subpar.

Toppin’s had his share of moments where he appears clueless as to his next move. He makes incorrect reads frequently and gets burned on drive-and-kick actions, an offensive staple in the NBA. Toppin has a penchant for sagging far too deep in the paint to discourage penetration, a habit which can likely be traced back to college. NBA shooters are too accurate to leave alone on the weak side, and Toppin has learned this lesson the hard way. Teams have relentlessly implemented drive-and-kicks with Toppin in the game to exploit this.

Bad weakside defense from Obi Toppin. Wanamaker penetrates baseline and Taj Gibson has to come over and help. Toppin strays too far into the paint and far away from making any kind of decent recovery toward the corner or wing. Ball goes to Bazemore in the corner, splash. pic.twitter.com/iNAs3aNaN9

Toppin has to become better acclimated with the ins and outs of playing defense in the NBA—it’s what’s holding him back from regular rotation minutes. He may very well be the worst defender on a Knicks team that hangs their hat on locking down their opponent. When coupled with the fact that Tom Thibodeau is a defense-first coach who’s historically given rookies a short leash, it becomes clear why Toppin hasn’t gotten the run time Knicks fans had hoped.

In totality, the jury is still out on what kind of player Toppin will be years from now. With little NBA reps and experience under his belt, Knicks faithful must remain steadfast and evaluate his per-game stats this season with a grain of salt.

We have yet to see the best of Toppin. Try to appreciate his skills at this juncture and enjoy the ride. He will continue to refine his toolbox over the coming years.