Where Are the Knicks in the New York City Sports Hierarchy? 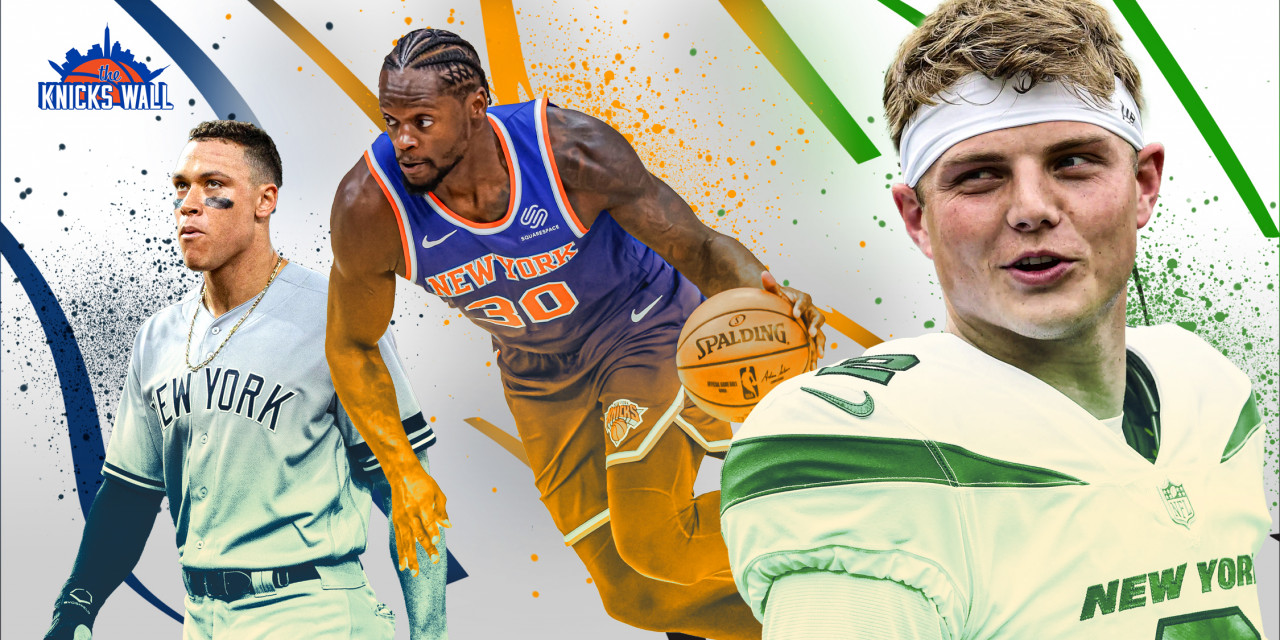 The Knicks are once again the talk of the town. But in a city so packed with other professional men’s sports teams, just how much do they stand out?

Spoiler alert: The Knicks and Yankees will always be the most beloved and popular teams in the Tri-State area.

However, the great dichotomy of New York sports fandom, for decades, has been the sidewalk enthusiasm for the Knicks versus the actual lore of the franchise and its home venue. (Chandler Bing voice: Have you heard the Garden when the Knicks cut a lead from eighth to five late in the third quarter?)

Yet, after a surprisingly successful debut year under Leon Rose and Tom Thibodeau (and without meddling from above)—in which the franchise held back on overspending for a washed star in favor of modest acquisitions—the Knicks re-established a respectable foundation, resulting in immediate basketball relevancy. When the Knicks are good, the entire city perks up, sources say.

In general, New York sports has gradually de-spelunked out of an abyss since Eli Manning improbably won his second Super Bowl in 2012 (what was it with mediocre Giants teams winning titles back then?). So, as of August 31st of 2021, post-Cuomo but still mid-pandemic, where do the Knicks rank—in terms of competency, relevancy, and my opinion—amongst major professional men’s New York City–based franchises? (Disclaimer: we’re not including the New Jersey Devils, and apologies to the Liberty, NYCFC, Red Bulls, and Necks.)

What a difference a month makes. From April through July, the Yankees fielded a sloppy, one-dimensional, dull squad and faced an organizational philosophical crossroads at the trade deadline—whether to buy or sell, embrace lefties and baserunning, or be content with mediocrity. To Cash and Hal’s (belated) credit, they responded by trading for Anthony Rizzo and Joey Gallo; the team won 13 games in a row and reclaimed the faith of New Yorkers.

They may not win the World Series (and could still use a new manager), but the Evil Empire reigns.

The Brooklyn Nets are a national story, not a local story. The volume of Nets mentions in NBA discourse and on ESPN does not correlate to bodega conversations. Regardless, the Nets have three of the best players in the league and will open the 2021–22 NBA season as championship favorites. On another timeline in which Loki variant Kevin Durant doesn’t put his foot on the three-point line, the Nets win the 2020–21 title.

Their GM (Sean Marks) is one of the league’s shrewdest, and their owner (Joseph Tsai) has the second-deepest pockets in basketball. (The Knicks—ahem Jimmy—should really spend the bills to outdo the Nets practice facilities, both in chicness and geographical convenience.)

Of any “New York” major sports franchise, the Nets have the best chance of throwing a parade the soonest. Per my made-up rules, that solidifies them at a no. 2. The question is: who will attend that parade?

In terms of drive-time radio segments, the Islanders—coming off back-to-back Eastern Conference Finals appearances, with no need to hang heads after losing to the Tampa Bay Lightning in seven games—have a limited ceiling amongst New Yorkers as the second-most popular hockey team in town.

The Isles have won a playoff series three years in a row—no other NY team can claim that. They snuck into the playoffs last season then beat the Pittsburgh Penguins and Boston Bruins—delightful developments for any New Yorker. With Barry Trotz at the helm and Mathew Barzal and Semyon Varlamov leading the way, the team is legitimately in the Stanley Cup conversation in 2021–22. Oliver Wahlstrom and Noah Dobson are only getting better, too.

They have a top-notch president/GM, Lou Lamoriello, who won the Jim Gregory Award in 2021. Barzal is locked to a favorable long-term deal. They have room to make moves this coming season, which owner Jon Ledecky seems willing to pursue. Plus, the Isles will (finally) move to the brand-new UBS Arena. If they can find a way to generate a few more goals, they’ll be back on top of the NHL.

The G-Men will always be the second or third most talked-about team around the Boroughs. However, this Giants bunch and brass have more work to do before they convince New Yorkers that there’s any there, there.

Daniel Jones is … OK? Who knows? David Gettleman did solid work this offseason, but I can’t help but feeling like he stumbled into that. The idea of having Saquon Barkley is a lot less cool coming off a torn ACL and considering the value risk of taking an RB at no. 2 overall and how bad the Giants’ offensive line projects to be. John Mara is sounding more out of touch by the afternoon.

On the other hand, the Giants do employ one of the youngest rosters in football, with only eight players over the age of 30 (pre-final cuts), and had a strong defensive unit last season. We’ll see.

Miraculously (hehe), the Mets upgraded from the embarrassing and Madoff-depleted Wilpons to Bobby friggin’ Axelrod—instantly the wealthiest owner in baseball and a lifelong fan — and have yet to improve in any capacity.

They acquired Francisco Lindor and appropriately gave him a 10-year, $341 million, only to see him put up .224/.316/.370 splits. They executed a misguided trade at the deadline, costing them a top offensive prospect, and promptly fell from first place to out of contention. Lindor—again, signed until the 2030s—and the aforementioned prized deadline acquisition have turned on the fanbase. Their MVP candidate, Jacob deGrom, hasn’t pitched since July 7th.

Axe is not been pleased. In other words: same old in Queens.

The Rangers would be higher on this list if not for the staggering mid-season meddling by Dolan that led to an unnecessary blow-up of the entire front office, just as they began to build something with All-Star Artemi Panarin, James Norris Trophy-winning defenseman Adam Fox and recent top draftees Alexis Lafrenière and Kaapo Kakko. Oops.

The Jets, who employ the youngest roster in football, are moving in the right direction with Robert Saleh at the head. In fact, no team in football will benefit from a bigger upgrade this season than the Jets, simply by replacing Adam Gase with the former defensive coordinator of the 49ers.  But the Jets are lightyears from competing for a playoff berth, and will likely wind up at the bottom of the best division in the AFC.

On the plus side: If the preseason is any indication, they have found a potential franchise quarterback, to go along with their building-block coach, and prudent GM.

Yet, the Jets are the Jets—run by two inconsequential Johnsons. They remain the NFL’s, and New York’s, ultimate “we’ll believe it when we see it” team. Did we mention their best player is out for the season?

So what about the Knicks?

Here’s how the Knicks’ last 17 months have played out:

The 2020–21 season ended in dispiriting fashion, but the New York Knicks are no longer a lovable punchline—and, in the abstract, for many thousands of Knicks fans, that’s a truly meaningful accomplishment on its own. Suddenly, they’re solidified with numerous appealing young players, a rock-steady coach, and a seemingly intelligent front office. Still, the teams in a better position to compete for a championship right now should be ahead of them, right?

Meh, on second thought—’Bockers comin’ in hot at no. 2. After all, it’s a Knicks Town.