Where Does Carmelo Anthony Rank in Knicks History? 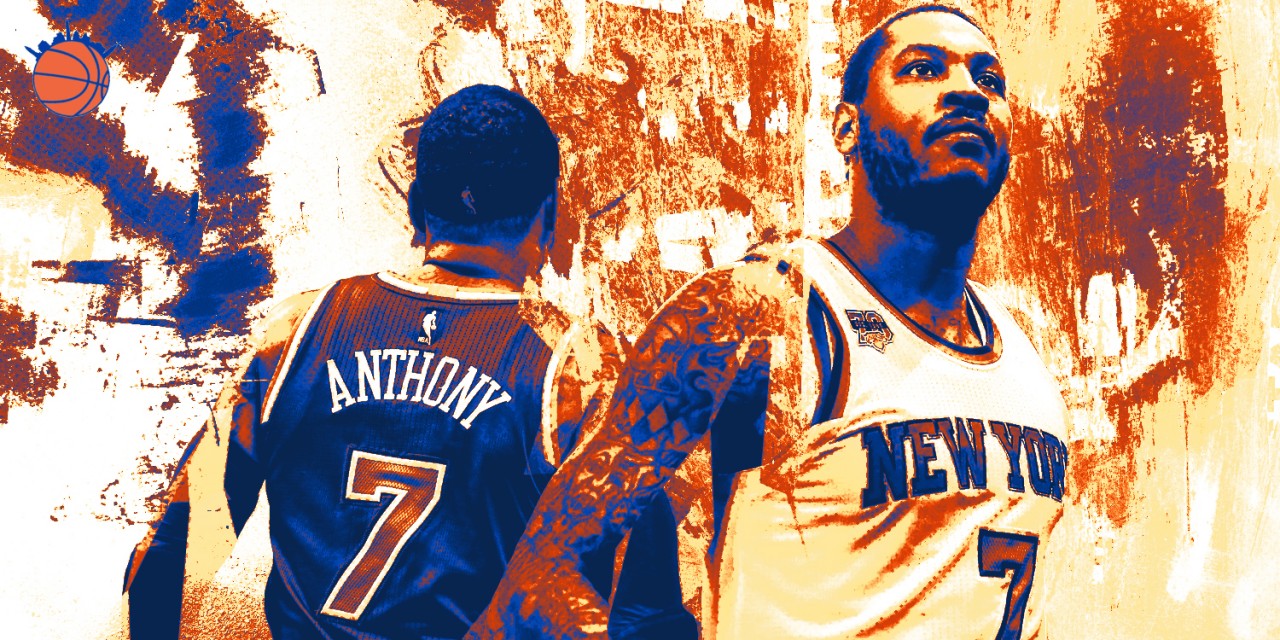 The most polarizing player in recent Knicks history is also its most distinguished: seven-time All-Star with the team, Carmelo Anthony.

Anthony’s stint in New York was complicated. He’s inarguably the franchise’s best player of the 21st century and the only true superstar for a generation of fans, yet the ways in which he arrived and departed are regrettable, and appraising his productivity and role in the team’s results is especially tricky.

Amid murmurs that Anthony could return to the Garden now that his former agent is running the show, let’s re-contextualize his place in franchise history.

For his first three full seasons in New York (2011–13), Anthony averaged 26.5 points per game. That mark would tie Bernard King for second on the franchise’ all-time points per game list (more Anthony-King parallels are on the way), slightly behind Bob McAdoo (26.7 PPG in 171 games).

The broader question that has persisted about Anthony centers on the degrees to which his ball-stopping and defensive shortcomings negated his offensive output. The value-oriented advanced metrics will never be kind to Carmelo, as the nature of his game didn’t directly make others more productive on either end. His VORP as a Knick (20.0) is the second-best mark in franchise history, but lags far behind Patrick Ewing (50.2), someone in New York for 15 years. His WS/48 in New York (.141) is on par with one-time NBA champion Serge Ibaka’s career mark.

He deserves plaudits for enthusiastically taking on the burden of carrying the troubled franchise—after turning down a chance to hop on the Banana Boat in Miami—but he might have been too eager to come to the Big Apple. Six months after the Knicks gave Amar’e Stoudemire $100 million, Anthony engineered a trade ahead of his own free agency so the Knicks could obtain his Bird Rights and offer him a bigger deal, forcing the front office to gut a promising roster.

The Knicks reached the postseason in Anthony’s first three springs with the team, but fell short of the conference finals. In 2013, he led the team to its lone second round appearance and 50-win season since 1999–00, then missed the postseason in each of his final four seasons.

Anthony lost 14 of his 20 playoff games as a Knick, but it’s hard to pin the blame for those particular results on his shoulders. In 2011, the post-trade Knicks were swept in the first round by the Boston Celtics, who had championship-tested chemistry. Anthony averaged 26.0 points and 10.3 rebounds per game in that series against a feisty defense, including a 42-point, 17-rebound, six-assist masterpiece in Game 2 (sans Stoudemire).

The biggest stain on Anthony’s Knicks career emanates from the 2011–12 season. The Knicks struggled after the lockout until Jeremy Lin sparked a 10-5 record in February. Anthony not only failed to embrace Linsanity and cooperate with Mike D’Antoni, he played a major role in running Lin and D’Antoni out of town. The team went 9-4 after D’Antoni’s ouster, and Anthony produced his signature Knicks moment during this stretch, though perhaps it’s fitting that his most indelible night came in the regular season after he clashed with the organization.

The Knicks fell to the Heat in the first round, but Miami was obviously superior. In Game 4, Anthony scored 41 points and drained the game-winning three to deliver the franchise its first playoff win since 2001.

The next season, the front office pivoted and surrounded Anthony with a litany of veterans (Jason Kidd, Kenyon Martin, Kurt Thomas, Rasheed Wallace, Pablo Prigioni*). And for one season, it worked: Woodson let ‘Melo cook as a small-ball 4, and Anthony produced one of the finest seasons in Knicks history. He averaged 28.7 points per game on 45% shooting, led the Knicks to 54 wins, and finished third in MVP voting.

The Knicks defeated the Celtics in the first round, but Anthony’s supporting cast didn’t show up against the stingy Indiana Pacers. Late in Game 6, Anthony’s baseline dunk attempt was symbolically denied by Roy Hibbert, along with Anthony’s last, best chance to reach the conference finals in New York. Even in the moment, that entire season felt like a short-lived nirvana.

During a recent appearance on J.J. Redick’s “Old Man and the Three” podcast, Anthony spoke about the latter part of his New York stint, and conveniently revised the history where he pushed for a trade then forced D’Antoni out.

“It turned into Gotham,” he said. “They plucked the pieces away. Before you know it, I’m just there in New York, and having to figure all of this out…Mike D’Antoni leaves…and things just start falling apart. Mike Woodson takes over…We got the older cats now…We had a good unit.”

Early into 2014–15, with Phil Jackson in charge, the franchise gave up on building a contender around Anthony and opted for tank and Triangle mode. It disgruntled the All-Star, but probably for good reason. Anthony wasn’t exactly Old Derek Jeter, but he was no longer efficient enough to be the focal point of an offense. The Knicks shut him down after 40 games for knee surgery and finished with 17 wins, resulting in the selection of Kristaps Porzingis.

A 3-15 stretch in early 2016 prompted the firing of Derek Fisher, and the Knicks missed the playoffs. In 2016–17, Jackson hired Jeff Hornacek, signed Derrick Rose and Joakim Noah, and made multiple public comments that irked Anthony. The Knicks won 32 games, and Anthony resisted a trade while Jackson said he “would be better off somewhere else.” Finally, in September 2017, Anthony was dealt to the Oklahoma City Thunder.

It’s hard to dole out responsibility for the break-up, but it’s safe to say Anthony lost a step (as humans not named LeBron James do), and suffered from Jackson’s influence both in terms of roster-building and scheme. In general, the Knicks’ organizational discontinuity persistently coincided with the declining talents of its high-salaried star.

“I’ve been in New York for 7.5 years. I played for maybe four or five different coaches, so there was never no consistency,” he lamented to Redick. “We couldn’t grow, we couldn’t build. I had over 100 teammates in seven years. Three GMs, three presidents. And you putting this all on me?”

Fortunately for Carmelo, the details of the divorce will fade over time, while his legacy as a player and person will continue to be enhanced. He has always been a beloved teammate, including with the Knicks, even as he clashed with the organization. His off-the-court legacy is only increasing in significance. His no. 7 will hang in the Garden rafters and his highlights will play repeatedly on MSG.

Anthony made seven All-Star games in seven seasons with the Knicks, tied for third-most in franchise history. His Box Plus/Minus (3.3) ranks fourth, while his Offensive BPM (4.5) is the best in Knicks history. He ranks seventh in total points, third in points per game (24.7) and third in three-pointers made.

Still: he remains a conundrum; somebody for whom the respect of his peers consistently outweighs the data. One could argue he was ahead of his time as a versatile, perimeter-oriented power forward; or you could say the pace of the game passed him by. His teams have scored an average of 4.95 points per 100 possessions when he’s been on the court, per Cleaning the Glass, yet he’s never averaged more than 3.8 assists per game and his career WS/48 mark trails behind Taj Gibson.

When the time comes, Anthony will be the first Hall of Famer inducted on the first ballot who played a prominent portion of his career with the Knicks since Ewing (2008). But that won’t end any debates. As Inside Hook wrote, Anthony will be “the most disappointing first-ballot Hall of Famer in NBA history…a top 20 scorer of all time and the only one derided for subsisting on inefficient buckets. He’s a 10-time All-Star who’s had less playoff success than anybody else who could say the same.”

Both King and Anthony were gifted scorers who could play either forward spot, though neither would be described as a two-way player. In King’s three-year peak prior to his knee injury (1983–85), he averaged 26.6 points per game, produced 26.7 Win Shares, led the Knicks to the second round twice, and provided an indelible NBA moment with consecutive 50-point games.

In 2013, King was inducted into the Hall on his seventh try. At the time of the announcement, Anthony had just joined King as the only player in Knicks history to score at least 40 points in three consecutive games. That same year, Anthony became the first Knick since King to win the scoring title. In January 2014, he broke King’s franchise record for points in a game.

Anthony produced 26.4 Win Shares during his first three full years, but his extra All-Star campaigns in New York earn him the nod; Anthony played 433 games as a Knick (including playoffs) compared to 224 for King.

At the risk of blasphemy, I’m also slotting Anthony ahead of Monroe. The Pearl was a pioneer of style and a key cog on the 1973 championship squad, but he couldn’t help but benefit from the profound talent around him. His 19.9 points on 48.5% shooting form 1974–75 through 1977–78 was impressive and meaningful, but his production beyond that simply doesn’t stack up with Anthony’s. He was a Hall of Fame talent who wasn’t the best player in his own backcourt, while Anthony had the highest usage rate in Knicks history (31.7), and maintained a True Shooting percentage (.545) that was slightly above his figure with the Denver Nuggets (.544).

And yes: Anthony would roast DeBusschere (and the entire league) if you transported him to that era. But, DeBusschere’s relative two-way ability and historical accolades keep him ahead of Anthony in Knicks lore. After being traded to New York in 1968, DeBusschere won two titles, made six All-Defensive First Teams, five All-Star teams, and averaged 16 and 10. He was voted into the Hall of Fame in 1983 and was named to the NBA’s 50 Greatest Players.

Like many folks on the planet, Anthony was very good at his job most of the time, yet fell victim to his own shortcomings and those of the people around him. He’ll always been one of the more polarizing players in NBA history, and a contradictory, frustratingly underwhelming star is the Knicks-iest version of a franchise player (see: Ewing, Patrick), at least in modern times.

In conclusion, I’m placing Anthony as the fifth greatest player in Knicks history, roughly an 83% on my Tomatometer for a largely enjoyable but flawed experience.

However, in this age of dualism over nuance, it’s impossible to encapsulate his tenure with a convenient numerical value.

(*Editor’s note: Pablo Prigioni, of course, was a rookie when he joined the Knicks, making his NBA debut in 2012–13. However, he was a veteran of professional basketball, playing overseas for 16 years prior. Long live Pablo.)