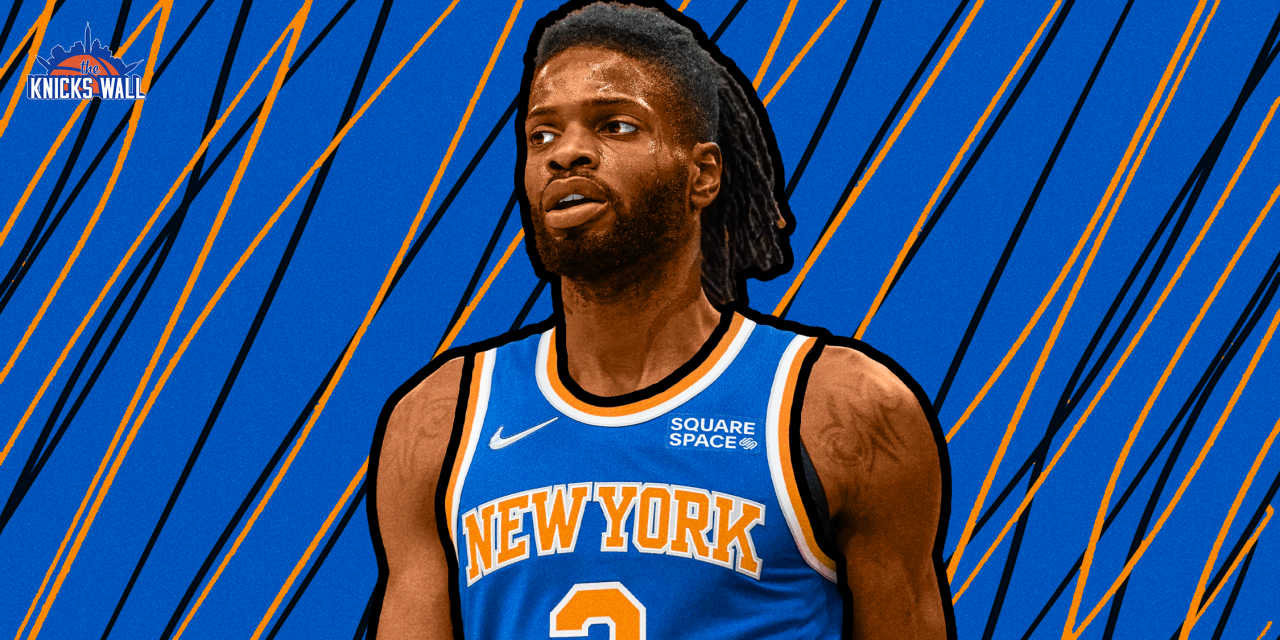 Having appeared in less than half of the games played this season, it’s becoming unclear how Nerlens Noel fits into this Knicks rotation.

The decision to re-sign Nerlens Noel this offseason was largely viewed as a positive for the Knicks, and why shouldn’t it have? Returning to the team on a reasonable three-year, $28 million contract, Noel just came off arguably the best season of his career, finishing top-three in the league in both Defensive Rating and blocks. The defensive-minded big seemed like a great insurance plan if the Knicks were unable to re-sign Mitchell Robinson after this season, especially with his health pending following his multiple injuries the prior season.

If you come at Nerlens Noel you better come correct pic.twitter.com/CDOkBhFaws

Thus far into the 2021–22 campaign, though, Noel has been the one battling injuries. He has only played in 18 of the Knicks’ 45 games, missing the bulk of them due to COVID-19 protocols and necessary reconditioning following his return to the team. He did finally return to the team in last week’s contest against the Mavericks but has been ruled out of each game since with knee issues. He was certainly needed last night after the team’s other veteran centers fouled out.

As his health continues to wane, it becomes unclear how Noel fits into the current rotation. His role was clearly defined last year, as he became the Knicks’ rim-rolling starting center once Robinson was ruled out for the season with a foot injury. The expected role for this season was predicted to be a bit tamer, splitting time at the center position with a healthy Robinson. Initially coming off the bench at first, Noel eventually usurped Robinson for that starting spot again, taking it back on December 7th against the Spurs.

In the time Noel missed recovering from COVID-19, though, Robinson has played his best basketball of the season and regained his firm grip on the starting spot. The trusty veteran Taj Gibson has played behind him for the time being, offering apt rebounding and enough defensive presence to keep the bench intact. With the two of them holding down the center rotation well enough, and the Knicks having to spend about $9 million on Noel for the next two seasons (the contact’s third year is a team option) questions have been raised about what New York’s plan is with the eight-year vet.

As the trade deadline looms, the Knicks continue to be mentioned in trade discussions with the Indiana Pacers for Myles Turner and the Sacramento Kings for De’Aaron Fox, among others. As both of these players are on hefty contracts, the Knicks would need to move some money on their end to make a deal work. In addition to draft picks and some of the Knicks’ prospects, a contract like Noel’s would likely be enough to (help) facilitate a trade for a bigger star.

In the games Gibson has played off the bench in place of Noel this season, he’s done well enough of a job for the Knicks to sleep easy at night with moving Noel off the roster. And if the Knicks didn’t want to stick with Gibson, they could always turn to rookie Jericho Sims who has looked competent in his short time playing at the NBA level.

Even when Noel has been healthy, his production has fallen off from last season. He’s only averaging one less minute played per game at 23.0 despite not consistently starting. In that time, he’s scoring nearly two fewer points at 3.5 per game and pulling down almost one less rebound at 5.8 per game. Defensively, he’s also missing a step. New York’s Defensive Rating with him on the floor is still a respectable 104, though that is the worst number of his career. One of his biggest flaws from last season, his slippery hands, seems to have gotten worse this year and is negatively affecting his time on the court. Noel misses a fair number of rebounds and passes in the paint simply because his hands aren’t cooperating with him.

In any of the shared lineups he has been featured in with Robinson, too, Noel has been outplayed by the fellow big man. When playing alongside the current starting lineup of Alec Burks, Evan Fournier, RJ Barrett, and Julius Randle, the lineup with Noel has been outscored by 13 points and is being outrebounded by nearly seven. When Robinson is featured with that group, they are outscoring opponents by six points and have a 4.6 rebounding edge, including more than five on the offensive end.

The same can be said for when Noel comes off the bench versus when Taj Gibson does. In lineups featuring Derrick Rose, Immanuel Quickley, Alec Burks, and Obi Toppin (the bench unit these two have each seen the most time with), the unit is still very functional with Noel. They outscore opponents by 13 points but still get outrebounded by 0.6 points. But when it’s Gibson with that lineup, they are outscoring by a whopping 28.4 points and grabbing over six more rebounds than their opponents.

Rolling out with the starters or coming off the bench, Noel is being outperformed by the other big men on the team either way. With Robinson and Gibson playing better than him in both situations, what reason do the Knicks have to insert him in either lineup over them? In addition to having Sims to roll out, should Robinson or Gibson get injured, Noel’s situation has become very murky. Yes, head coach Tom Thibodeau would move Gibson back to the bench when Noel’s healthy as he’s previously done, but would it actually be best for the team? The numbers thus far have made the answer to that question clear.

Noel’s lack of production and extensive missed time this season has quickly turned that three-year contract into a big question mark for the Knicks’ brass. Should they ride it out and hope that the defensive stalwart from last season returns at some point? Or should they decide to throw caution to the wind and include his contract in a trade for a player that can help the team win right now?

Step one for Nerlens Noel is simply getting consistently healthy enough to prove himself on the court, but even that seems like a tall task for now. Hopefully, the Knicks don’t leave this situation with mud on their face when they should have just given Robinson an extension with the money they had spent on Noel.