Where in the World Did Immanuel Quickley Go? 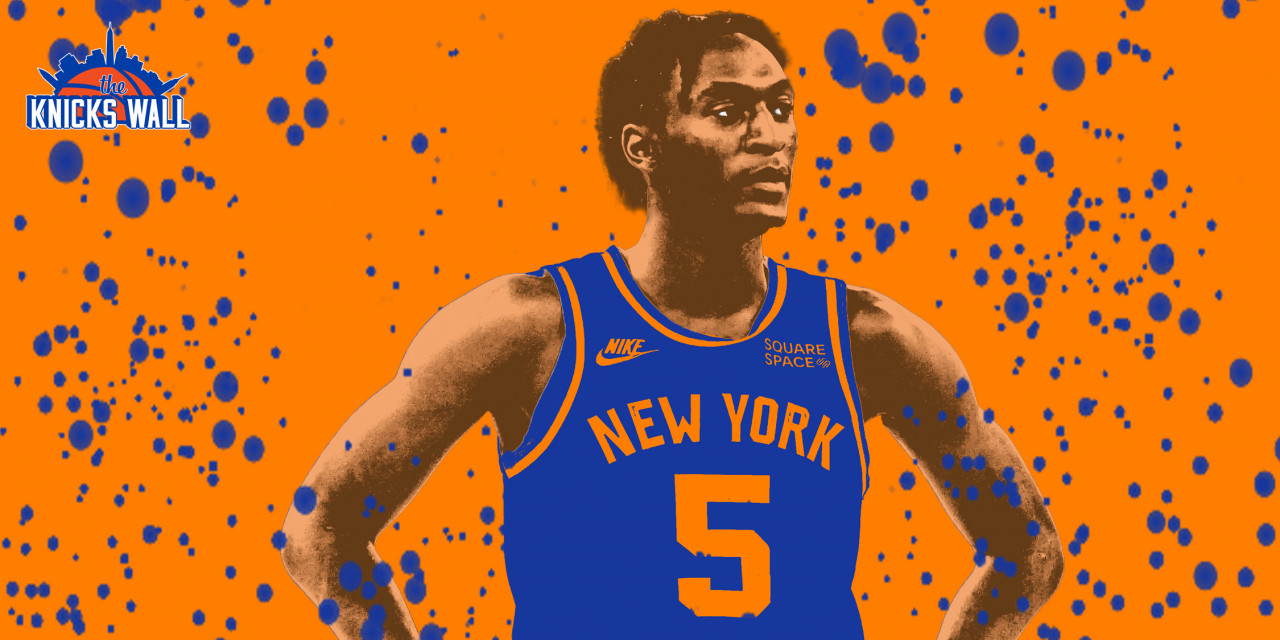 Immanuel Quickley’s rise to prominence in his rookie season has been, to this point, followed up by a major sophomore slump.

When a 76er falls in the Garden, and there are tens of thousands of people there to see it—as well as to “ooh” and “aah” at it while tweeting and retweeting the footage of it—you best believe it makes one hell of a sound.

I THOUGHT THEY WERE FRIENDS pic.twitter.com/BiujPzIfNe

Never mind the fact that Tyrese Maxey appears to stumble over the size-13 feet of Mitchell Robinson, thus wasn’t dropped naturally, but instead tripped. No one cares about that. Why? Is it enough that it’s just straight-up not as fun? Is it warranted to reject the reality of the situation because saying that Immanuel Quickley—the unexpected-yet-welcome heir to the throne once helmed by Pablo Prigioni and Raymond Felton—breaking Maxey’s ankles sounds so much better than “Maxey tripped over Bigfoot’s ankle”? I say it is. I’m sure many others would, too. There are a good many lousy things in this world. Perhaps we can reward ourselves by manipulating this play into something more enjoyable.

If only the same could be said and done for Quickley’s 2021–22 season thus far. He was dubbed the point guard of the Knicks’ future because of what he showed as a rookie under head coach Tom Thibodeau in terms of his all-around potential. He played in 64 of 72 games last season, recording 19.4 minutes per contest. In those minutes, he scored a shade over 11 points on average while maintaining a 39% clip from beyond the arc. His spark off the bench, often in relief of Elfrid Payton, was undeniable. He became a fan-favorite—the exciting new name at Madison Square Garden, if you will.

But with a new season comes new expectations and new goals for Quickley, a goal-setter at heart. He told The Ringer’s Mirin Fader some of his goals entering training camp as a rookie: “I will succeed, show confidence, and be fearless every time I step on the floor. I’ll go hard to get better every day. I’ll average nine points, three rebounds, three assists, and shoot 90% from the free throw line and 40% from three.”

There were more; he checked just about every one of them off. And entering his sophomore season, IQ had new goals, “posted by his dresser and next to the sink in his bathroom, so he can see them when he brushes his teeth. “He doesn’t want to reveal them just yet,” Fader wrote. “He’d rather show them on the court.”

So far, he either hasn’t or hasn’t been able to due to a lack of opportunity. Although seven games is a small sample size, it’s enough to begin painting a picture of what trends we should expect to see early on. Quickley’s minutes are down from just under 20 to just barely over 14. He’s scoring 5.4 points per contest, a six-point drop from his numbers just one year ago. He’s shooting a ghastly 26.2% from the field and 21.4% from three. His per-game averages of 1.4 rebounds and 1.7 assists don’t depict as drastic a fall off from last season, but they’re still down.

If you take the A train 20 minutes south from MSG, you’ll arrive at the New York Stock Exchange. You’d be a fool to invest in IQ:NYK right now. That stock is way down, with trends not necessarily promising a hike anytime soon.

That’s not to say there won’t be one. Quickley didn’t start showing flashes of brilliance until around his eighth career game a season ago, when he ripped off on a tear of four-straight games scoring in double figures. But we’d be naive to pretend that this Knicks team is the same as it was last year. The addition of Kemba Walker is a big step up for the starting point guard spot, which was never going to be Quickley’s to begin with, at least not just yet. Thibs likely would’ve rather gone with a larger, older group including Derrick Rose, who is currently the “second-string” point guard by a standard depth chart’s admission.

Quickley, despite his promise, is young and still underdeveloped. On a squad with two season veterans in Walker and Rose manning point guard duties for at least the next few years, he’s in a position where he can learn and grow, both as an overall playmaker and as a scorer fit to fill it up as the Knicks number-one point down the line. He can’t be that if he’s going to shoot 21% from three, the place where he arguably offered the biggest spark last season off the bench. On opening night of this season, Quickley’s number was called for a hair more than eight minutes out of a 58-minute contest, likely due to the fact that he couldn’t produce from deep. He was 0-for-3 from three in the first half; he didn’t play a single minute in the second half, nor the two overtime periods.

If it’s any consolation, he’s not naive to his struggles, nor how to fix them. He spent much of this offseason working on his game alongside some of the best players in the NBA while scrimmaging with the USA Select Team, so he’s used to making adjustments and seeking growth opportunities. Right after the season opener, he hit the gym and got back to work.

“I expect to stay ready throughout the season whether my name is called, whether it’s not called,” he said. “That’s something I learned from a lot of players in this league is always stay ready, always wait for your opportunity, and when you get your opportunity go and play hard and have fun. I think that’s one of the biggest things I’ve learned in this league.”

Another thing to remember about this league: there’s a big difference between a diminished role and a disappearing role. Good players on deep teams—and the Knicks can finally say that they have one of those—see their roles get diminished all the time. Occasionally, those players get dealt. That won’t be the case for Quickley, not when your current rotation point guards are 31 (Walker) and 33 (Rose). But for his role to not become one of those that disappears entirely, IQ will need to make the most of his opportunities.

How cliché that sounds is not lost on me, and perhaps I should’ve made the most of the opportunity in writing that sentence by finding a different way to say something so simple. And yet that’s, in all honesty, probably the most honest and efficient way to put it: Quickley is one heck of a young talent, one of All-Rookie Second Team-caliber last season despite 24 players being drafted ahead of him. But his spot in the rotation has to be earned, and the sole way he can ensure that happens is by proving that he can be trusted with greater responsibility as a second-year player.

Perhaps it won’t matter, because the Knicks are so deep and don’t need Quickley’s skillset in order to win at the moment. But if it reaches that point, there’s a bigger problem, and thus a more significant conversation to be hard. By that point—not an imminent one, by any means, but one worth contemplating—you’ve disappeared, not diminished. Quickley has a chance to do either, and to come back from one of those paths a stronger, more reliable player. The other is a path far too many former Knicks have gone down, never to return.

That’s not what anyone sees for Immanuel Quickley. But it’s on him to make sure that it remains that way.

»READ: How do the Knicks Handle the Center Rotation With Nerlens Noel Injured?

»READ: Julius Randle Has All the Tools to Run It Back This Season