Which Knicks Quarantine House Is Best? 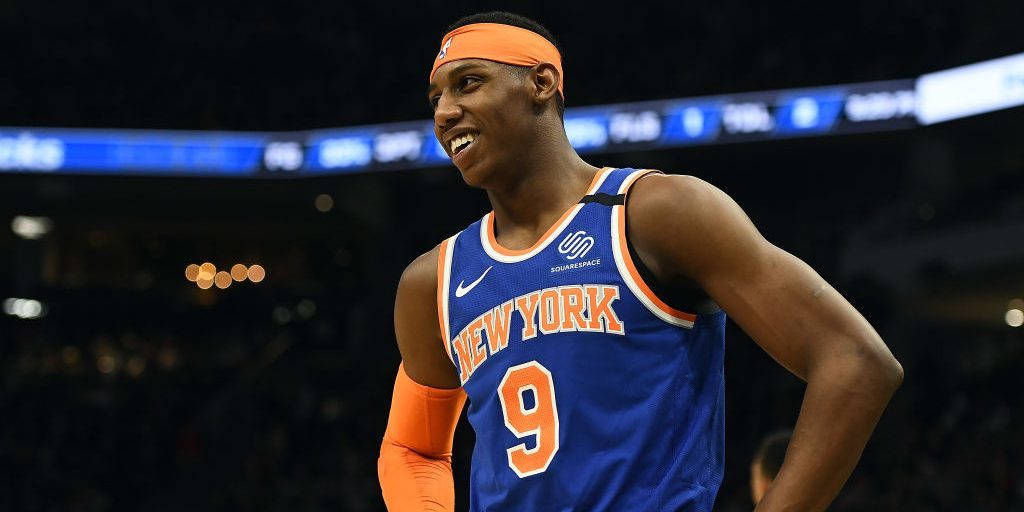 Taking a page out of a recent social-media trend, the Knicks shared “house” groupings of players, offering different tastes and personalities.

With everyone driven into their own homes as the coronavirus-forced quarantine lingers on, social media pages have jumped on a new trend: devising fantasy houses of celebrities, TV show/movie characters, and athletes. It’s like the “which lunch table would you sit at” meme—but socially distant!

The New York Knicks’ social media accounts recently joined in on the trend, proposing four houses with four players each out of the current 15-man roster and two-way player Kadeem Allen (once again leaving Kenny Wooten out cold).

Which Knick house would you go to? ?

Since I have plenty of time and even more boredom, let’s analyze why each house would be fun to live in.

This house is headlined by rookies R.J. Barrett and Ignas Brazdeikis. They both grew up north of the border, playing together on the Canadian U17 basketball team. Barrett is into fashion; he signed a deal with Indochino before he was drafted and expressed a desire to walk the runway during New York Fashion Week. Brazdeikis is a fan of UFC fighting and his favorite octagon athlete is Conor McGregor.

Taj Gibson will probably act as the de facto “dad” of the house. The 33-year-old big man’s leadership is what made him an attractive free-agent target for New York.

Bobby Portis may bring some uneasy vibes to the house. He said he imagines opponents slapping his mom in an interview during his college days and punched a teammate in the face during an altercation when he was a member of the Chicago Bulls. His intensity would be helpful at the grocery store, though—no one is beating him out for the last package of toilet paper.

The headliner for this house is Mitchell Robinson. Not only is the second-year center one of the Knicks’ best players, but he also seems like one of the most fun guys on the team. He hosts his own show—”Block Party,” where he conducts an interview and plays a game a guest—on the Knicks’ social media accounts. Robinson also posts himself dancing on TikTok every once in a while.

Kevin Knox enjoys playing video games. His suit from his draft night had the Fortnite logo lining the interior. According to Marc Berman of the New York Post, the Knicks’ brain trust considers Knox one of the team’s hardest workers, so you could probably get some nice at-home workouts in with him.

Payton and Ellington are two reserved, laid-back veterans. I don’t really know what they like, but perhaps the mystery of finding that out makes choosing the house intriguing.

Fellow third-year guard Frank Ntilikina is a bit quiet. He speaks mainly through his unmatched fashion.

Veteran forwards Maurice Harkless and Reggie Bullock are the other two housemates. Harkless has an interest in photography—photographing land spaces in particular—and soccer. Bullock enjoys photography, too; he busted out a camera during the Knicks’ media day.

To cap it off, we have House D (ironically, with only one guy that actually plays solid defense).

If you’re looking to get in on some charity work, consider hitting up Julius Randle. The sixth-year veteran power forward gave school supplies to kids in Rucker Park in August and recently joined forces with Bobby Portis and HelloFresh to donate $180,000 to New Yorkers in need of food.

Allonzo Trier was featured in The New York Times Magazine when he was just 13 years old and made a very brief appearance in a Powerade commercial centered around Carmelo Anthony. He might have some fascinating childhood stories to tell.

Dennis Smith Jr. will always be down to listen to some J. Cole, his friend and fellow native of Fayetteville, North Carolina.

Kadeem Allen, another Carolinian, is the one guy out of this group that actually plays solid defense. His journey to the NBA started at Hutchinson, a junior college, so he knows what it’s like to persevere and come out on top. It couldn’t hurt to have someone with that type of drive around during these difficult times.

Every house has its benefits, but which one is the best choice?

Personally, I would choose House B because of Robinson and Knox. My second choice would be House C. If I could create a house with any Knicks personnel, here’s what I would choose.

My dream house scenario goes beyond what the Knicks’ post proposed. In addition to the three players, I think assistant coach Royal Ivey would be enjoyable to be around. Ivey hopped on Robinson’s Block Party and they constantly traded disses. Seeing those guys playfully go at each other would be fun. I chose Ntilikina in hopes that I could get some fashion advice and Knox as a partner for video games and workouts.