Which Knicks Should Be Available at the Trade Deadline? 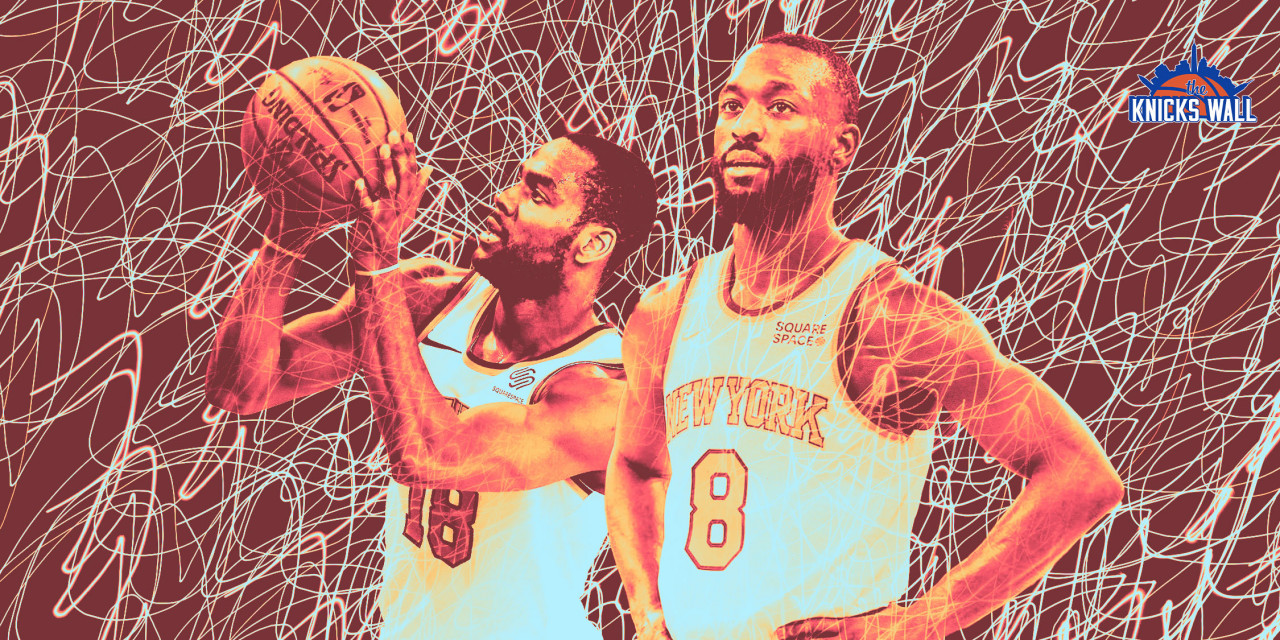 The trade deadline is approaching and the Knicks should be open for business. Which players should they sell, consider keeping and make unavailable?

Everyone has a favorite season. You’re lying if you say you don’t. Those who love the beach prefer summer. Those who love foliage? Give them autumn. Those who clamor over Christmas would do anything for a snowstorm.

Me? I prefer chaos. That’s why my favorite season is NBA trade season, and my favorite holiday mascot is Adrian Wojnarowski. We celebrate on Thursday, February 10th. Big men, $5 cover; guards get in free. BYODA (bring your own distressed asset).

To prepare, I went ahead and assigned a small sample of New York Knicks to various groups—from willing to deal to unwilling to entertain parting with—and explained why. Pretty self-explanatory, yes? Time to worship at the alter of the take machine. Please note that these groups are not limited to these players and these players alone.

There’s a very specific element from a scene in The Office that makes the Knicks come to mind.

Michael Scott is as hopeless a romantic as they come. As luck would have it, when the Scranton Business Park holds a blood drive on Valentine’s Day, Michael meets someone whilst his blood is being drawn. They have a nice conversation; she says he’s cute. For an interaction starring Michael Scott, it almost seems too good to be true. And, of course, it is. Before he can stand up and officially introduce himself, he faints. When he awakens, the woman is gone. All she left behind was a glove, and legally, the nurse (who Michael calls a waitress) cannot give him her name.

In a desperate effort to find the woman who very well may have been the woman of his dreams, Michael organizes a “Singles Mixer.” It’s a ruse, of course; all Michael wants is for his mysterious blood bag buddy to appear at the door and make his dream come true. Eventually, Dunder Mifflin’s singles latch on to their boss’s hope, and anxiously watch the entrance with him.

Hours go by, and this mystery woman doesn’t show. No matter: Michael isn’t willing to give up. He tells everyone to go home if they wish; Oscar Martinez, ever the optimist, says no, we’ll wait a bit longer. Another hour or so passes, and Kelly Kapoor finally tells Michael that it’s time to drop the dream and call it a night. Oscar amends his initial stance and tells his boss, “Come on. We’ll all go.” The office departs into the night, mostly still single. At least there’s hope for something down the line, even if their wildest dreams didn’t pan out the way they wanted them to in the end.

When Michael is hopelessly waiting for something more to come of his mixer—or someone to show up—I think of Tom Thibodeau remaining optimistic that Evan Fournier and Kemba Walker might someday turn the corner. Even after benching Walker due to his lousy start to the season, he’s gone back to him in hopes that he will return to his one-time peak form. Fournier, meanwhile, was an albatross of a contract to begin with and has yet to prove that he’s the answer at shooting guard.

Thibodeau and Leon Rose met Kemba and Fournier. They made a connection, however insubstantial. The players Thibs met at the figurative blood drive have yet to show up at the door, despite being invited with the equivalent of a bright pink flier. “Come on,” Knicks’ brass should tell their fearless, hopeless leaders. “We’ll all go.” And by go, I mean pull the trigger on dumping their offseason pick-ups as soon as possible.

Neither can be the centerpiece of a trade, but both can be included as potential contributors for a team looking to move on from an ill-fitted contract of their own. Maybe it’s a trade with the Sixers—and not for Ben Simmons. I don’t particularly like Tobias Harris, but perhaps he’s the scorer that can vault the Knicks back into the play-in spotlight. Maybe it’s a move to acquire Jerami Grant, the so-called super-available prize of an otherwise weak deadline unless these hypothetical superstar moves shock us come mid-February.

These are incomplete suggestions, of course, but they’re something. And with the Walker-Fournier duo, whether dealt at once or in separate moves, something isn’t just better than nothing. It’s dire.

Consider including in a trade: Alec Burks, Mitchell Robinson

This consideration comes from a unique place of love for each of these three players. Let me count the ways.

Burks: His de facto ball-handler responsibilities are a significant undertaking for a player who had never been asked to do anything remotely close to the duties of a point guard. Burks is used to spotting up and being a consistent option in transition. His added responsibilities have been vital for a team that somehow, despite having three actual point guards on its roster, has yet to find a point guard capable of taking on the bulk of time at the position.

But that’s just it: Burks is no point guard, and as the Knicks begin to fall further out of contention for a guaranteed playoff spot in the East, it might be time for Thibs to further tighten up the rotation. That means finding time for RJ Barrett, Quentin Grimes, Immanuel Quickley, and the newly acquired Cam Reddish. If Leon Rose is willing to part with any of his wings, the easiest option is probably the relatively-cheap Burks, whose $10 million per year contract is movable, if not totally desirable.

Robinson: Remember when Dwight Howard started his career as a Houston Rocket by working out with Hakeem Olajuwon, and there were photos, and everyone freaked out because The Dream was going to revitalize the future Hall of Famer’s career, and imagine Dwight with a hook shot alongside James Harden… remember that? Well, it didn’t work, but I completely support the concept and believe it’s past time for Mitchell Robinson to enroll at the Patrick Ewing School of Big Men.

Of course, Ewing is a busy man coaching the Georgetown Hoyas. But heck, call Tyson Chandler. Call Amar’e Stoudemire. Put Mitch in a gym with a big man that is either skilled, brutish, or both and let them go to work on him until he exits the other side a new man with a more menacing beard. And take pictures. You know the rules. Pics or it didn’t happen.

That being said, there’s only so much Robinson can do right now, and given his lengthy injury history, there’s only so much he’s probably willing to do. His mobility is compromised to an extent. From what we’ve seen to this point, his skill set is limited. Rebounds are fun, but in a league that is seeing the boom of the versatile big man unfold in real-time, Robinson doesn’t fit the bill. This is not to say he’s ineffective. As a natural, true-born center, Robinson is the bill. It just so happens that you need to be the bill, and then another bill, and then a whole stack of bills. It’s a complicated league, man.

I just think it’s time. Mitch will be an unrestricted free agent this offseason, and on a cheap contract, he’s primed for inclusion in a deal that improves New York overall. Damian Lillard is probably a non-starter at this point but De’Aaron Fox is an interesting proposition, and while the Kings don’t need a Mitchell Robinson in their big man rotation, perhaps he’s just one piece as part of a mega-deal. Maybe it’s a three-team deal that moves Richaun Holmes or (finally) rids the Kings of Marvin Bagley. But what matters is this: I imagine the Knicks would be willing to listen and to include Robinson in talks, at the least.

Note: These notes on Robinson could apply directly to Nerlens Noel and Taj Gibson as well. Jericho Sims might be worth waiting for a year or so of development before dealing, given his competent play of late, so he’s excluded here.

Might be fine to deal in a can’t-miss situation: Julius Randle, Immanuel Quickley/Obi Toppin

Do the Knicks want Ben Simmons? Damian Lillard? Fox? The winning lotto numbers? To be sorted into Gryffindor?

Most big moves will cost Julius Randle and one of Immanuel Quickley or Obi Toppin, if not both. We know that’s the case. Now, what feels unlikely: that any of these players are actually dealt. Every member of the Indiana Pacers is bound to be moved before any of these stars budge. Deals for any of them could potentially cost an IQ or an Obi, and perhaps both, but definitely not both plus Julius.

So, that’s the rub. The “meh” deals are less aggregator-friendly for a reason, but they could still cost a relatively pretty penny if the Knicks are looking for an immediate fix/upgrade, given that players like Myles Turner, Domantas Sabonis, and Caris LeVert are all, indeed, players that would provide an immediate lift for a team in need of an upper.

Don’t even think about it: RJ Barrett

Need I say more than what our guy Mike Cortez laid out in his excellent article yesterday? If so, I’ll just leave you with this.

The doubters hate to see it. The Knicks just love to finally have someone worth committing to long-term.