Which Pending Free Agents Do the Knicks Prioritize? 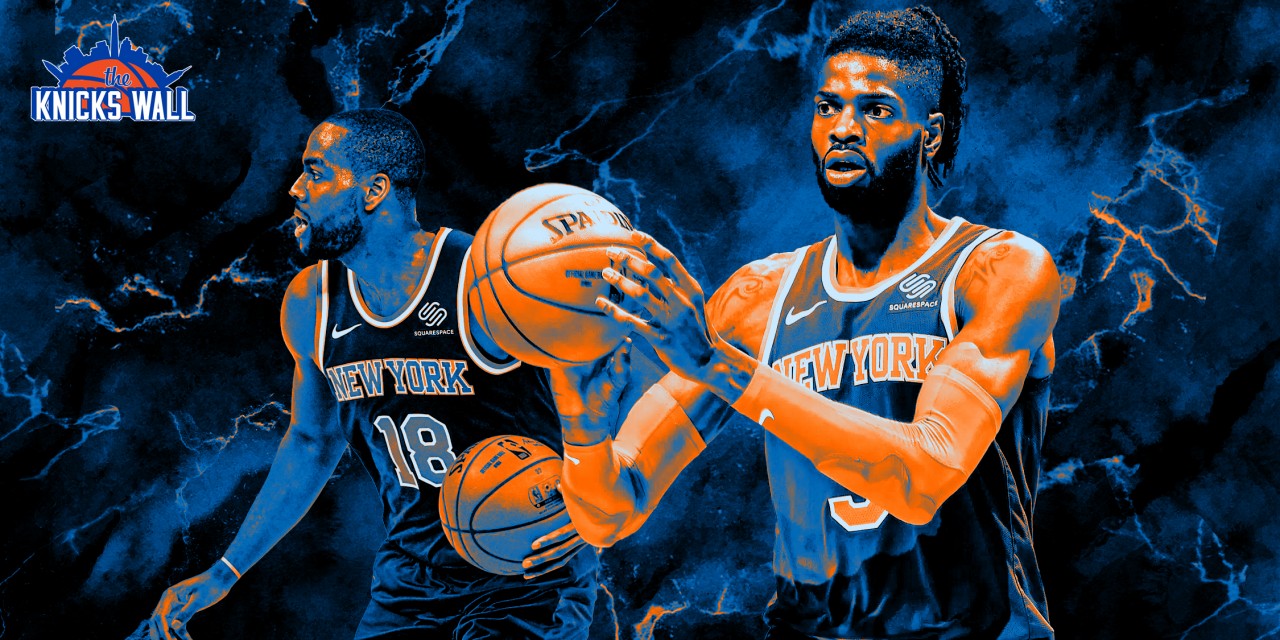 Cap space and draft will rule the offseason for the New York Knicks. However, the Knicks will have to make decisions on their own internal free agents first, figuring out who to retain and who to let go.

The New York Knicks are in an excellent spot. Julius Randle has emerged as an in-prime All-Star talent, while R.J. Barrett is a 20-year-old who made a leap in year two. Guys like Obi Toppin, Mitchell Robinson, and Immanuel Quickley offer young talent for the future, while Tom Thibodeau gives them a proper direction towards building a winning team. Further, the Knicks have two first-round picks in the 2021 NBA Draft and the cap space to make a huge move this offseason.

New York has several players who will enter free agency this offseason, making team president Leon Rose’s job a bit tricky in who to retain and who to let go. With nearly $60 million in cap space this summer, the Knicks could make a big splash, but they can also earmark a bit of the space towards retaining some of their top internal free agents.

So, let’s rank the Knicks pending free agents. Starting from the players who are most likely on their way out of the organization to the players who need to be labeled as a priority.

I’m of the mind that New York upgrades the point guard position, even more so than the addition of Luca Vildoza. With that in mind, the Knicks will most likely move on from their current group of guards.

This summer, Harper, a restricted free agent, is stuck between a solid G League player but someone who isn’t likely to receive a shot with the Knicks outside of spot minutes at the end of games. New York can place him back in Westchester, continuing to keep him in the organization. However, Harper is back-of-the-roster fodder now, and those guys are often rotated out every summer.

As for Payton, despite starting the entire season, he is the placeholder for New York at the point guard position. Payton has averaged 10.4 points and 3.3 assists, but the issues remain. Due to his lack of outside shooting (28.9% this season), opposing defenses have packed the paint and forced Payton, not Randle or Barrett to beat them. If the Knicks are serious about sustaining their success for the future, moving on from Payton and upgrading the point guard position seems like a must.

On the one hand, Frank Ntilikina is only 22 years old and has shown improvement as an outside shooter. Due to not making the starter qualification, his qualifying offer this summer falls from an unrealistic $8 million to a manageable $5 million. On the other, Ntilikina is about to finish the season with under 400 minutes, fewer than Austin Rivers, and has been shuffled between an on-ball/off-ball role over the better part of four seasons.

If New York wants to keep Ntilikina, they could keep him on his qualifying offer, one year, $5.2 million, but I’d be hard-pressed to see the Knicks extend a multi-year deal for someone they didn’t play much at all this past season. As far as Ntilikina, would you return to New York and hope they play next season, or hit free agency, find someone that wants to play you, and then re-enter the market at 24 with more experience under the belt?

(Re-)signed in January, Gibson was reunited with Thibodeau and brought in to bring energy to the frontcourt. His defense has slipped a bit, but not to deem him a negative. Offensively, Gibson was good around the rim and good and active on the glass. 5.4 points and 5.6 rebounds in 21.0 minutes a night for a January signing works.

At 35 years old, Gibson should be viewed as an end-of-the-bench big option that doubles as a key veteran in practice and helping the youth. Because of that, it’s tough to envision Gibson being a priority, despite having a solid season. Between his age and former top-10 pick Obi Toppin sitting on the bench, New York could bring him back for support, but slotting Toppin in for a larger role next season makes more sense.

The Knicks knocked their mid-range signings out of the park this past offseason, and Burks is a prime example. Signed for just $6 million, the Knicks got an effective scoring wing off the bench. It turned out to be a stellar signing; Burks shot 40.9% from three, averaged 2.2 assists, and even played point guard for Thibodeau at times.

A solid wing player can handle the ball a bit, shoot, and not the worst defender in the league? That guy normally gets paid. With the mid-level exception at about $9.5 million for the 2021–22 season, Burks is a player with a skill set that could fit on several teams’ benches for the next few years. His price tag may come in a bit higher than the Knicks wish to pay.

PLEASE STOP TRYING TO MEET NERLENS AT THE RIM pic.twitter.com/ezpbjpypET

The best signing made by the Knicks this past offseason, Noel came in for just $5 million and turned into an elite defensive big man. Averaging 4.8 stocks per 36 minutes (3.2 blocks, 1.6 steals), Noel has been an excellent substitute for the injured Mitchell Robinson, providing just the type of defense needed in a Thibodeau system.

What makes this tough is Noel straddles that starter/backup borderline for centers. His offense is rough, highlighted by poor dexterity, and his defense against bigger post players, like Joel Embiid, Nikola Jokic, and Andre Drummond, is suspect. What makes Noel is perfect center in the league is his ability to defend on the perimeter while having the recovery speed for timely blocks and shot alterations.

All of that being said, this feels like someone who gets the mid-level for someone who wants to platoon the center position or holds the position down as a starter before handing it over to a younger big man.

If you weren’t mad at me over the Ntilikina placing, you might be mad at the Rose placing.

No one has changed the Knicks quite as Rose has. Since arriving in New York from Detroit, Rose has averaged 15.1 points, 4.3 assists, and shot 40.9% from three. His change-of-pace off the bench has been solid, and he’s even taken a few games over recently with his ability to finish in the lane. Not a great defender, Rose has reinvented himself as a crafty defender, capable of earning steals and funneling ball-handlers for Noel to clean up for him.

What are you paying Derrick Rose, and are you making him the starter? Rose has certainly earned another chance at starting, especially if he’s going to be a consistent shooter from the outside. Would New York do that over, say, signing Lonzo Ball to run the position? The cost works both ways. Would you rather sign Rose to a sizable deal or allow Immanuel Quickley to run the position at a lower rate?

Rose will most likely be back in New York, as the relationship between him and Thibodeau suggests. However, I wouldn’t be shocked if New York dragged their feet a bit and Rose went elsewhere, with the promise of being a starter assured.

Largely viewed as a trade piece for most of his Knicks tenure, Bullock stayed in New York, emerged as the starter, and hasn’t looked back. Currently, the former North Carolina swingman is averaging 10.7 points, 3.4 rebounds, and 40.3% shooting on six attempts per game. His presence as a shooter quelled New York’s spacing issues a year ago, and his defense has been unheralded for months now. In short, the Knicks have a quality 3-and-D player in tow.

Bullock’s free agency will be a battle of performance vs. skills. He’s putting up an excellent season, and six threes a game will play anywhere. At 30, he’s in a good place to cash in, as well. However, he doesn’t do much outside of shooting and playing good, but not great defense. On a team with title aspirations, he’s probably best served as your third-best wing player.

Robinson remains my number one internal free agent, despite playing just 31 games this season. Barring a surprise return, the former second-round pick will finish with averages of 8.3 points, 8.1 rebounds, and 1.5 blocks. He made the necessary adjustments as a shot-blocker but also saw his defensive rebounding numbers go down. The 65.3% from the floor was solid, and, based on what I’ve seen, the relationship between Robinson and Thibodeau’s defensive scheme was going swimmingly.

Consider me in the “Robinson over Noel” camp for New York’s starting center spot, largely because of the age difference and Robinson’s ability to hold down bigger post players. This is a chance for the Knicks not just to retain a key young player under market value. Still, it also offers them a flexible salary, something that will become important as Randle’s extension comes, Barrett’s extension off of the rookie deal, and any subsequent salary is added to the books.

If I’m New York, I’m operating closer to $10 million per season for Robinson, ideally something along the lines of four-year, $45 million, with a decreasing salary. Not only does that secure Robinson the wealth he missed out on by being a second-round pick, but it also maintains his value as a player. The Knicks, if they so choose, could look to move Robinson next summer, where his salary decreases and could be a fit among more teams in the league.

New York has made shrewd moves so far, so consider the Robinson one as the first true test of the Rose era.

The heart of the team, man.

»READ: Evaluating Reggie Bullock in the short-term and long-term