While Knicks See Themselves in Heat, They Still Lack Closing Ability 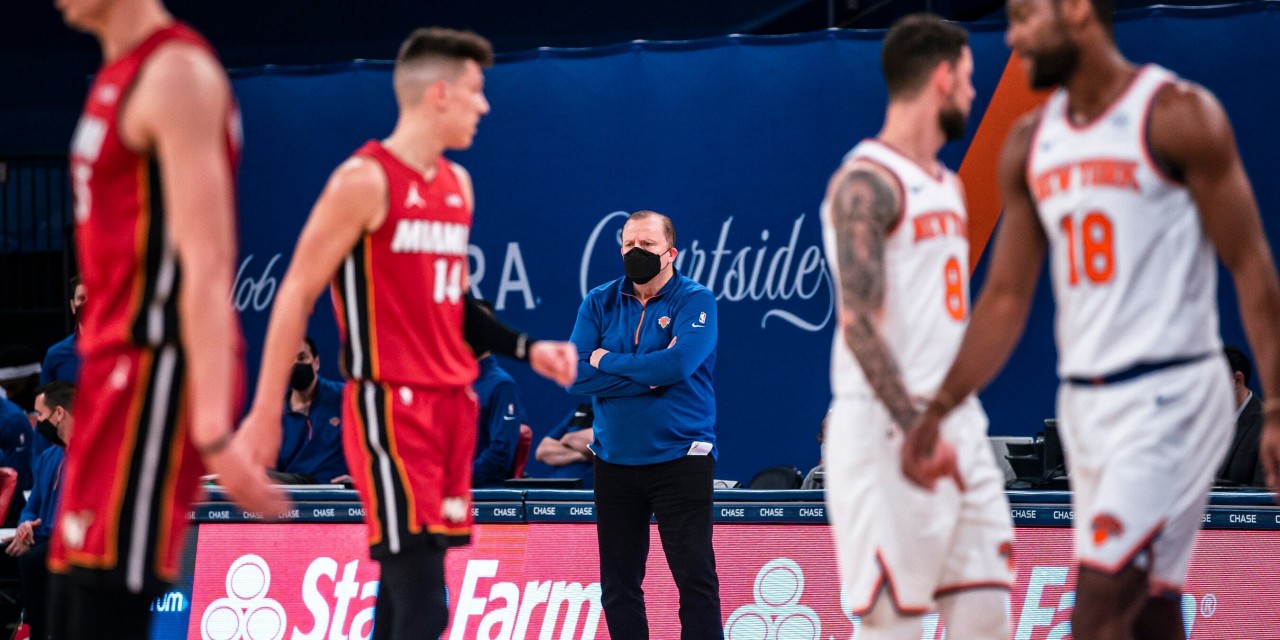 The Knicks and Heat will play the second of two straight games on Tuesday, but the two teams share plenty of the same qualities.

NEW YORK — The New York Knicks and Miami Heat mirror each other in some ways.

Each team’s top two players are a rugged slasher on the wing with some good playmaking chops (R.J. Barrett and Jimmy Butler) and a big man that can handle, score, and pass (Julius Randle and Bam Adebayo). They each have a young guard from Kentucky whose scoring and shooting abilities make them a fan favorite and spark plug off the bench (Immanuel Quickley and Tyler Herro) and both teams are characterized by their grittiness and toughness, a characteristic that trickles down from their coaches (Tom Thibodeau and Erik Spoelstra).

The main difference between the squads is how they are currently living up to their respective expectations. The Knicks have been better than most people thought, as they find themselves in the thick of the playoff race. The Heat outperformed the expectations around them last year by making the Finals but have been one of the bigger disappointments this season, as they entered this afternoon’s contest in 13th place in the conference.

Today’s game, though, showed that the Heat are still a formidable adversary when everything clicks. And they got everything clicking today. A 24-point performance for Bam Adebayo, a near triple-double from Jimmy Butler, and Miami’s starting backcourt shooting a combined 8-of-17 from deep allowed them to beat New York by a score of 109-103. Although they allowed the Knicks to tie the game with six minutes remaining, they executed better down the stretch and secured the victory.

In the post-game press conference, Tom Thibodeau was asked about his team’s play to close out the game. He acknowledged the talents of Butler, Adebayo, and the good shooters that flanked them but he didn’t make any excuses. “You gotta make plays down the stretch and you gotta understand the fourth quarter’s different,” Thibodeau said. “The intensity’s different. The decision-making’s different. The officials will allow more to go on in terms of physicality. So, we have to understand that part of it.”

The intensity was a core trait of Miami’s squad from last season. They haven’t shown that same fire this season since injuries and COVID-19 related absences have decimated them. But today, they still showed they can turn up the heat (pun intended) when they need to.

The Heat deployed an aggressive defensive attack, doubling ball-handlers off of screens and forcing New York’s guards to make difficult passes to escape the jam, which threw off their offensive rhythm. “They trapped our guards. They trapped ’em off pin-downs and it created a bit of indecision,” Julius Randle explained after the game.

“In terms of the blitz, we felt like that’s what they would do,” Thibodeau explained. He said he thought they “had some good looks at some threes.” The numbers agree—New York shot 38.1% from deep, thanks mostly in part to Reggie Bullock and his seven triples, which tied a career-high.

The area about which Thibs had more critiques was New York’s defense. “We never got established defensively from the start of the game,” he said. “Offensively, I liked us, particularly in the first half. But defensively, we need to be a lot better. There were several possessions in which we had pretty good defense, but we didn’t finish our defense. Against a team like that, they’re gonna keep moving. You gotta make sure that you play it throughout the clock and you gotta finish it with a shot challenge and a rebound. And we didn’t do that and that’s what you need to do.”

The Knicks looked like they required someone who could attack the defense off the dribble. Before the game started, reports came out that a player of that archetype—Derrick Rose—would soon be joining the Knicks via trade from the Detroit Pistons. The 2011 NBA MVP projects to have a big role with New York in his second go-around with the Knicks and his third team playing under Thibodeau.

Jimmy Butler on Derrick Rose to the Knicks:

“Thibs getting the band back together.”

The addition of the 32-year-old Rose signals that New York is looking to be competitive. The Eastern Conference’s seventh seed is only two games ahead of 13th place. There could be serious competition for the play-in game, and the Heat should certainly be in the mix. Bringing back Rose upgrades the talent on the Knicks’ roster, and they’ll need as much as they can get to snap their playoff drought.

New York remains ahead of Miami in the standings. But now that the Heat are as close to full strength as they have been all season, they could begin to rediscover the mojo they showed when they convincingly ran through the Eastern Conference playoffs last season. The Knicks will have another shot at the Heat on Tuesday at their house. The road game affords New York another chance at a team whose cohesion and intensity they look to emulate.

»READ: A Derrick Rose trade is not the answer