While He Waits For His Chance to Start, Immanuel Quickley Should Be Knicks’ Closer 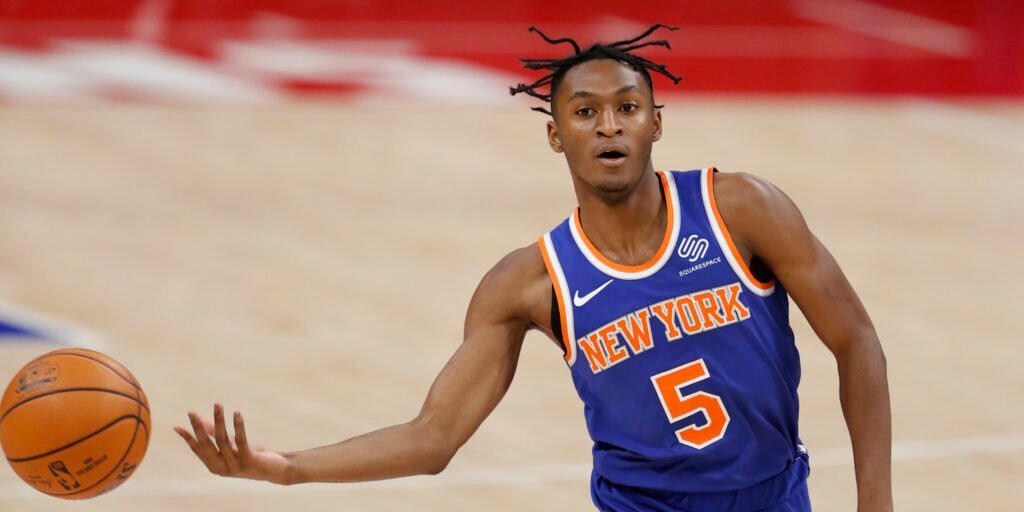 Knicks rookie guard Immanuel Quickley has proven in short order how valuable he is to maximizing the team. Closing with him on the court is a good next step barring a starting lineup change.

Thus far Payton has been able to be that third scoring threat and the Knicks have been winning games against quality opponents. Whether you are a believer of mean regression, a small sample size truther, or simply not a fan, there is a plausible reason as to whether Payton can keep this scoring pace much longer or not. It is also impossible to not want to see more of Immanuel Quickley.

Quickley’s minutes off the bench are met with equal anticipation and enthusiasm as watching a new episode of The Mandalorian, and like Mando, Quickley is quickly (pun intended) proving that he comes through when he is needed most. For Kentucky/Knicks fans Quickley is what we thought Malik Monk would have been had the Knicks drafted him right down to the jersey number.

In Monday night’s comeback win in Atlanta versus the Hawks, that time was towards the end of the third quarter. The Hawks were widening their lead to double digits and the Knicks’ energy was conversely plummeting. Quickley changed that immediately when he entered the game with about three minutes left in the third. Thibodeau rewarded his rookie by leaving him in the rest of the game.

Quickley finished with 16 points on 4-of-7 shooting, including some sweet moves:

WHAT A MOVE FROM IQ pic.twitter.com/QbnYrv1pNW

A rational person leaves that game, looks at that efficiency, and says to themselves, there is no way Quickley cannot be the starting point guard. It is typically best practice to start your best players, giving Quickley a compelling argument, however, the fact of the matter is Payton has not done anything to lose his starting job.

Payton is averaging a career-high in points and the team is winning. Thibodeau may prefer to focus on getting Randle and Barrett going to start games, setting the tone on defense versus an offensive blitz. Switching up the winning formula now might not be worth the risk if the team is in a groove.

Thankfully, there is an equally enticing compromise Thibodeau can make with fans while Quickley continues his ascension: make him the closer.

Thibodeau is a known student of the game and close friends with Doc Rivers. The two have shared a bench together and an unfathomable amount of conversations about basketball. Knowing that it would not be surprising to see Thibs take a page out of Doc’s playbook and deploy Quickley much like Doc deployed Lou Williams.

Under Rivers, Williams started just 28 out of 219 games but averaged a healthy 29.4 minutes per game. Rivers made Williams a major part of the offense, putting the ball in his hands a lot. Last season Williams ranked only behind Kawhi Leonard in touches per game with 61.9 and averaged 20.4 points per game. The formula seemed to work because of Williams’ wizardry to self create something out of nothing, whether it be drawing a silly foul against his opponent or stopping on a dime to hit a three.

Quickley has said he has studied players like Williams and the influence on Quick’s game is evident.

Thibodeau has shown early signs of willingness to trust Quickley like Rivers trusted Williams. It is becoming increasingly clear that Quickley was not just a Kenny Payne/World Wide Wes pick, but a Thibodeau pick. Since the start of camp Thibodeau has gushed about Quickley, including Monday night.

“I thought he played really well. He doesn’t have his timing yet. He was out for quite a bit,” Thibodeau said, via Steve Popper in Newsday. But he’s fighting through things. His shot-making ability puts a lot of pressure on people and it opens things up. And then, of course, his ability to draw fouls.”

Thibodeau would go on to credit Quickley and company for reinvigorating the fight in the team for the comeback. The comeback was a taste of what Quickley can bring to the floor. His ability to make shots from anywhere on the floor makes him feel like a hallucination after watching the likes of José Calderón, Emmanuel Mudiay, Jarrett Jack, and other names too painful to bring up for all these years.

Quickley is the first scoring threat to play point guard for the Knicks since Derrick Rose (yeah, I forgot about that, too) and Raymond Felton. The impact he has by simply being on the floor helps main scoring options Barrett and Randle, who are both many things but are not great shooters from outside.

Without a threat like Quickley, the defense can play 10 toes down underneath the arc. With Quickley defenders have to think about pull-up threes, fake handoffs, and one of the prettiest floaters in the game.

One thing that is not up for debate or compromise is Quickley’s minutes. If Barrett and Randle can play 40 minutes Quickley can play 30. Monday night was the blueprint on how to allocate those minutes. Thibodeau could play Quickley the final 15 minutes of the game as he did on Monday while finding him some more first-half minutes. In addition to Payton, Thibodeau can use a myriad of combinations at guard (Austin Rivers, Frank Ntilikina, Dennis Smith Jr., Barrett, and Alec Burks) to patch together the other 18 minutes.

There is an argument that closing lineups are (and always have been) the more important lineup. But that is for another day. Today is about one simple ask. Play Immanuel Quickley a lot of minutes because he is the best option at point guard.

»READ: The Mavericks’ picks give Knicks chance to add another Immanuel Quickley talent