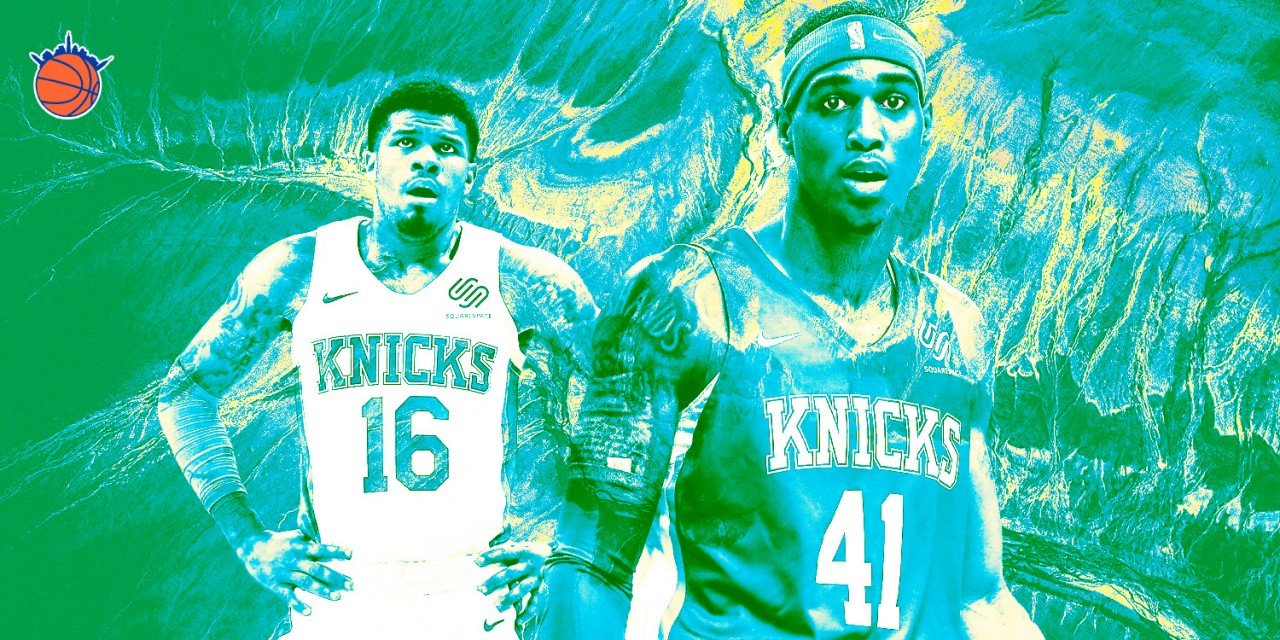 With training camp set to start this week, the New York Knicks are in flux as almost all spots in the rotation are up for grabs. While they already have 15 players guaranteed to make the roster, they have four more who are slated to move on to Westchester after training camp.

However, one of the four hopefuls will have the chance to land the Knicks’ final two-way contract, since Kris Wilkes’ contract was voided in early September.

In recent years the Knicks have had a soft spot for the diamond in the rough, and this preseason competition seems right up their alley. This October Scott Perry’s calling the shots The Bachelor style. In truth, the Knicks are less like the archetypical former high-school quarterback and more like Flavor Flav (or an unfunny SNL skit).

Still, an opportunity to compete at the highest level is still exactly that. Who’s the most deserving? Who’s most likely to prove themselves?

V.J. King had an appearance in the 2016 McDonald’s All-American game and it’s been downhill ever since. After averaging only 3.9 points and 3.0 rebounds in his junior season at Louisville coming off the bench, it’s a surprise he even made it to Summer League. Even there, he found it hard to get off the bench. A 6’6” small forward, I doubt there’s any space for him in Knicks lineups since the team secured serviceable wings this summer. Maybe there’s potential that could be reached in his future, or maybe he had his six seconds of fame like Seventh Woods.

Either way there doesn’t appear to be any signs he’ll play himself out of Westchester this season.

Peters is another junior who went undrafted and was subsequently picked up by the Knicks on an Exhibit 10 deal and played in Summer League. Unlike King, he had a strong final season in college. In his last year at Mississippi State, Peters averaged 12.0 points, 5.2 assists, and 2.0 rebounds. He also shot 38.6% from three with a lot of those deep shots coming off the dribble. His “Parking Lot Peters” moniker was well-earned.

One thing that he unfortunately shared with King is a weak Summer League performance. I, for one, bought into the hype of the undersized, underdog potentially playing himself into an NBA contract. The Las Vegas tournament is known for its yearly array of sharpshooters looking to grandstand. As a flashy point guard, Peters fit the bill for a potentially exciting player to watch.

His Summer League stint was a choke job from start to finish. Through five games he made a total of two field goals. Appearing sheepish and unconfident, he was painful to watch.

The Knicks need depth at the one, but with guard Kadeem Allen already securing the other two-way contract, it seems unlikely that they’d double down on prospective point guards. At a suspicious 6’0”, it’s doubtful he’d offer much in terms of defense in the NBA, much like his predecessor Trey Burke.


Peters could offer some clear benefits on offense when he’s playmaking and jump shooting, though. Outside shooting is something neither Dennis Smith Jr. nor Elfrid Payton have in their arsenal, and it’s a necessary role for a point guard in today’s NBA. There’s room for him in the backcourt if he can bounce back from his ghastly Summer League performance, but he’ll have to work his ass off if his first professional games are any indication of how he’ll immediately fare in the NBA.

Like Peters and King, Hinton had a lackluster Summer League. In four games he averaged 4.3 points and 1.8 rebounds. I’d be lying if I said any of his contributions were memorable.

The best thing Hinton has going for him in terms of prestige is being the NCAA’s men’s basketball leading scorer for the 2018–19 season. He averaged 29.4 points per game for Division II Shaw in his junior year. It’s jaw-droppingly impressive until the details come out. Hinton redshirted his freshman year and played that final season. At 22 years old Hinton demolished competition as a man amongst boys. Clearly overlooked by Division I scouts, he was a big fish in a small pond throughout college. Yet give him credit where credit is due: he averaged over 20 points per game in all three of the seasons he played, and had a career field goal percentage of 51.3%. At 6’5” he proved to be active on both ends of the court by averaging 2.3 steals per game, although he was likely more physically imposing than most of his competition.

For those unfamiliar with Hinton: pic.twitter.com/TQZiq2wESv

The asterisk next to his Division II career can only be carried so far though—there are still 10 players on the court at a time and his tenacity on defense, athleticism in the fast break, and creativity around the rim are all qualities that could potentially translate to the next level. He’s not an exceptionally gifted distributor and the 2 spot his chock-full of competent players, so unless he can play down to the 3 or up to point guard it’ll be tough to fit him into any lineups. Hinton appears gifted and still has the chance to surprise everyone at training camp. Gelling with the group and being able to affect the game as a stellar teammate might be his best shot for securing the open two-way contract.

Wooten is very much the antithesis of all the aforementioned players. He’s not an offensive threat; his college numbers aren’t impressive; and the limelight has eluded him like Michael Jordan (allegedly) eludes his gambling debts.


This is what made him such a pleasant surprise in Summer League. The volleyball spikes let it be known that he was a two-time all-conference defender and averaged 2.4 blocks per game in his collegiate career with Oregon. His career 1.4 offensive rebounds and 58.9% field goal percentage inform you that he’s not a slouch around the rim. Wooten is a hard nosed throwback to the big men of yesteryear. The show he put on in Las Vegas is probably the extent of his capabilities, though. At 6’9” with no jump-shooting ability, Wooten will be a bit undersized if he’s slated to play minutes at center in the rotation.


With his explosiveness and defensive prowess it almost seems like a tragedy he didn’t develop any Draymond Green–esque offense skills. Under Mitchell Robinson and Bobby Portis, he may be the break-in-case-of-emergency center the Knicks need during stretches when Robinson is hurt or in foul trouble.

It doesn’t seem like there’s an abundance of potential for Wooten. What you see is what you get, and that should be enough for a team that ranked 26th among defenses last season. Wooten will likely be a great pick-and-roll partner for Peters and Hinton in Westchester for a large part of the year, but he’d be the least surprising call-up and two-way entrée if things go well in training camp.

It’s entirely possible that these two-way contracts become nothing, and these American Idol–like auditions for them are merely a fun way for general manager Scott Perry to distract himself from what a stale joke the Knicks are, but it’s still fun to watch how it plays out. Honestly, all three, excluding King, might be delights to watch at the next level. Let’s hope that whoever earns it lives up to the underdog hype.

»READ: What the Westchester Knicks could look like next season