Who Will Emerge From the Scrap Heap of the Knicks’ Guards? 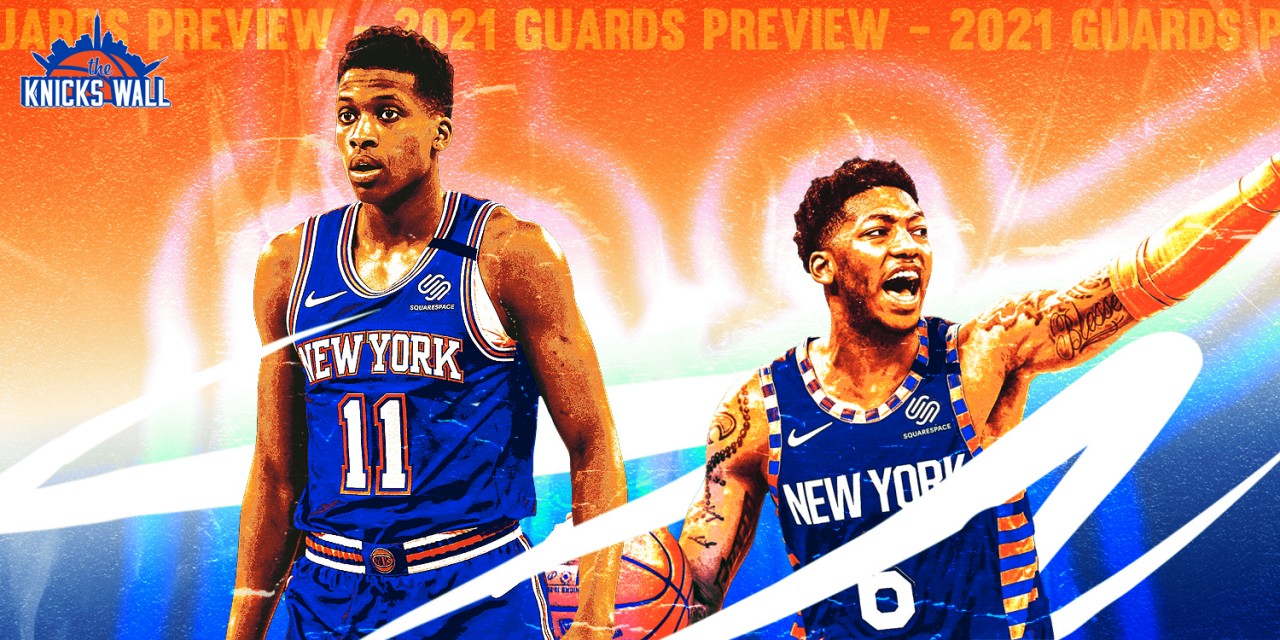 Despite bringing in some new faces, the New York Knicks find themselves in a similar position to last year when it comes to figuring out a guard rotation. There is a ton of overlap at the position, but no one will wow you in terms of on-court production.

Head coach Tom Thibodeau will encounter the same backcourt minutes allocation issue that has plagued the Knicks for the last three years: how can one strike a balance between playing guys who contribute positively while still ensuring the young players get the opportunity to develop?

While the Knicks are not bringing back Damyean Dotson, Wayne Ellington, Allonzo Trier, or Kadeem Allen, there are new backcourt additions to join the returning core of Elfrid Payton, R.J. Barrett, Dennis Smith Jr., and Frank Ntilikina. Jared Harper and Theo Pinson have joined the organization on two-way contracts, and the two will be fighting to get to the edge of the rotation along with Jacob Evans and former Seton Hall star Myles Powell, though it is unlikely that any of that group will see consistent minutes. More prominent newcomers to the Knicks’ backcourt are Austin Rivers, Alec Burks, and, this year’s 25th overall selection, Immanuel Quickley.

It is extremely unlikely that the Knicks have transformed their roster into a team that will be competitive. Still, it will be difficult for Thibodeau to forgo proven, known quantities like Payton, Rivers, and Burks to favor more enigmatic players like Smith Jr. and Ntilikina. Smith Jr. has reportedly been working on his jumper this offseason, but he has a tremendous amount to prove coming off a truly bizarre season where he seemed to have lost a lot of feel for the game. He averaged 5.5 points and 2.9 assists per game in 2020, compared to 13.6 points and 4.8 assists per game a year prior.

Ntilikina continues to provide value on the defensive end. However, despite a strong finish to last season, we still have yet to see him produce consistently enough on offense to entrust him with the keys. Ntilikina just turned 22 and only just finished his third season in the league, where he averaged 6.3 points and 3.0 assists in 20.8 minutes per game. At a certain point, however, the “he is only this old” excuse runs out. Compare Ntilikina’s third season stats to Elfrid Payton’s third season: Payton averaged 12.8 points and 6.5 assists on 29.4 minutes per game as a 22-year-old. This figures to be a prove-it or lose-it season for both Smith Jr. and Ntilikina.

Fortunately for the both of them, the backup point-guard spot looks to be quite open. The starting job is likely Elfrid Payton’s to lose. Despite Payton’s crippling inability to shoot, he posted the second-highest Net Rating on the team last season after Mitchell Robinson. The offense was a bit of a disaster (102.4 points per 100 possessions) when he was off the floor.

Immanuel Quickley spent almost all of last season at Kentucky playing off the ball and projects to be more of a sharpshooting floor-spacer than a floor general. Neither Austin Rivers nor Alec Burks will likely spend too much at the point. Both are capable of handling the ball and have enough experience to be valuable offensive assets, however, Cleaning the Glass classifies the majority of both of their minutes as either wings or combo guards.

It will be up to either Ntilikina or Smith Jr. to prove that they are worthy of taking on the brunt of the second-unit playmaking.

Barrett’s role as a crafty, slashing wing should not be compromised at all by any of the newcomers. Quickley, Rivers, and Burks all fit very well next to Barrett due to their ability to shoot and the fact that none of them stop the flow of the offense with isolation-heavy play. Hopefully Thibodeau will prioritize surrounding Barrett with shooting, as last year his ability to create was severely limited by playing with floor-shrinking players.

It would also be a big help to both Barrett and the Knicks as a whole if the rising sophomore can take a step forward as a shooter by improving upon his 32% on threes and 61.4% on free throws last season. Barrett’s size and strength give him solid versatility, so there is not much reason to get bogged down on whether he is starting as the nominal shooting guard or small forward. A starting lineup that looks something like Payton, Rivers or Burks, Barrett, Obi Toppin or Julius Randle (preferably Toppin, but that is an issue for another day), and Robinson would be relatively tantalizing compared to some of the units the Knicks have trotted out over the past few seasons.

As has been the case in recent Knicks history, it is up to the team’s interesting young players to prove they are worthy of the interest. Barrett carved out a great role for himself last year and solidified his spot as a viable second option on offense. He could become a real problem if his shooting progresses and his defense improves with experience. Ntilikina and Smith Jr. both need to prove they are capable of contributing value on the offensive end by turning some of their perceived potential into quantifiable output.

In the meantime, expect lots of minutes from Payton, Rivers, and Burks, and hope one of the young players takes a leap forward.

»READ: Trading for Lonzo Ball would help in many ways for New York