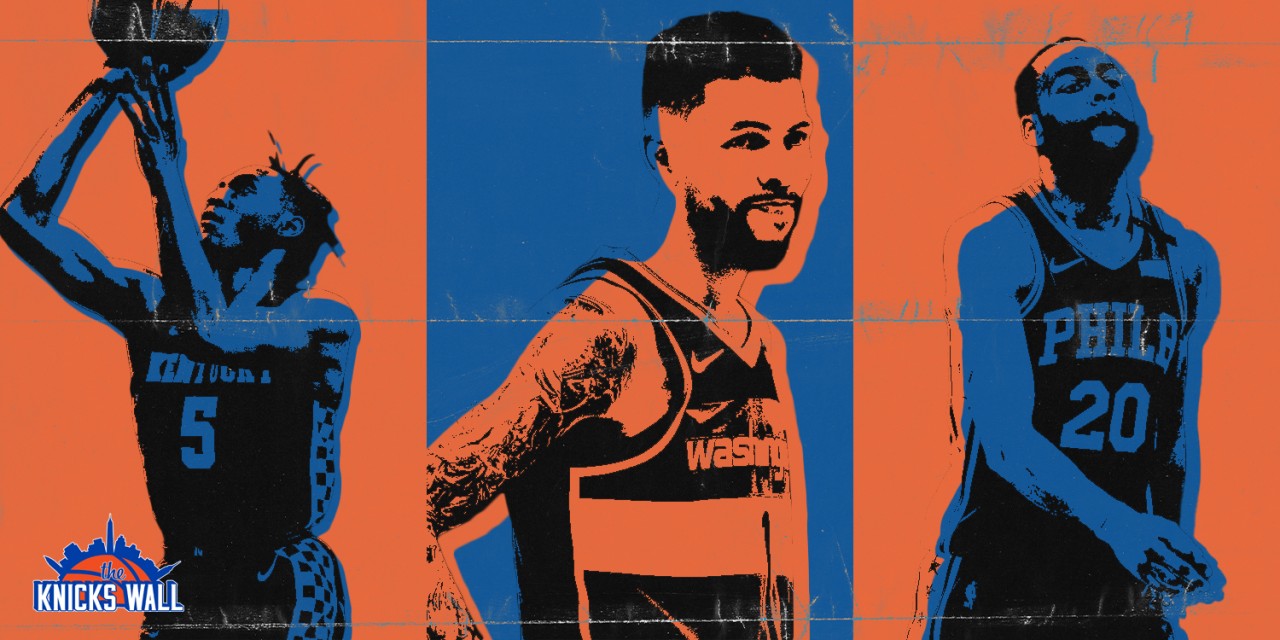 The Knicks, for once, prioritized three-point shooting in the offseason, picking up several new additions in the draft and free agency with long range skills.

The NBA average three-point percentage in the 2019–20 season was 35.8%. The average team attempted 34.1 three-pointers per game. The 2019–20 New York Knicks were not a good three-point shooting team. The team shot 33.7% on three-pointers, which was 27th in the league, and attempted only 28.4 threes per game, which was 29th in the league. After rostering a glut of big men last season, spacing through shooting was bound to be a priority for the Knicks this offseason.

Of players who finished the season on the Knicks last year, only Damyean Dotson shot better than the league average of 35.8% on three-pointers, while Bobby Portis and Allonzo Trier shot league average exactly. All three of those players are no longer with the Knicks. Dotson was a mysterious loss, a player who fit well next to the young Knicks due to his ability to nail threes at a good clip and fly around the floor at lightning speed on both offense and defense. Portis and Trier were likely not brought back because they both carried themselves as primary options on offense, though neither had the stats or defensive intensity to back it up.

The Knicks’ most-used lineup that didn’t have Marcus Morris in it only attempted 28 threes throughout the course of the entire season. The average team would eclipse that in a single game. Needless to say, Knicks President of Basketball Operations Leon Rose knew he would have to look outside of the roster to find shooting talent. As with any attempt to acquire talent in the NBA, there are three main avenues: the trade market, free agency, and the draft. Rose used the abundance of cap space and draft picks that the Knicks held in order to make key upgrades at shooting.

On November 2nd, the Knicks announced they had signed Alec Burks, and while the team did not disclose the details of the deal, the contract is rumored to be one year for $6 million. Burks spent last season with the Golden State Warriors and Philadelphia 76ers, where he shot 38.5% from three, including shooting 41.6% in his final 18 games with Philadelphia. In 66 games last season, he shot 39.4% on 2.5 pull-up three-point attempts per game, and 37.7% on catch-and-shoot three-point attempts per game.

Burks was one of the few players keeping the Warriors’ offense from complete catastrophe last year. In his time with Golden State, he averaged 16.1 points, 4.7 rebounds, and 3.1 assists per game. At 6’6″, he can slide across most guards and smaller wings defensively, which lends itself nicely to lineup flexibility coming off the bench and gives him the ability to fit next to poorer shooters like R.J. Barrett.

While the Warriors were slightly better with Burks off the floor last season (-3.5 points per 100 possessions versus -5.4 points per 100 possessions while he was on the floor), much of that had to do with the fact that he was playing with somehow even wonkier lineups than the Knicks trotted out. His most common lineup last year involved him splitting time at point with Draymond Green, while surrounded by the truly eclectic mix of Glenn Robinson III, Willie Cauley-Stein, and Eric Paschall. The 2020–21 Knicks project to feature a little more balance on the roster, and Burks should benefit from the shooting lanes opened up by strong slashers and powerful bigs inside.

Austin Rivers, meanwhile, has benefited substantially from spending the majority of the last two seasons with the Houston Rockets in the three-point capital of the world. Save for back-to-back seasons with the Los Angeles Clippers, where Rivers eclipsed 37% on threes, his shooting numbers have traditionally been putrid. More concerning than his three-point shooting has been Rivers’ free throw shooting. He shot better than 70% from the line in only two out of his 10 seasons, and shot worse than 60% in three seasons. Last season, however, Rivers seemed to have stabilized both as a three-point shooter and from the line, shooting 35.6% from three on four attempts per game and 70.3% from the line.

On a more granular level, Rivers was able to maintain a healthy shot diet in an offense that often leaves players out to dry at the end of the shot clock. He connected on 36.4% of his 2.4 catch-and-shoot threes per game, while clipping 35.9% of his 1.4 pull-up three-pointers per game. Rivers was able to carve out a nice role for himself by showing keen ability to score at the rim and on the perimeter and limiting shots from the inefficient midrange.

The 6’3″ guard is not without his flaws; being able to play 23.4 minutes per game on a winning team is no fluke. While head coach Tom Thibodeau should be apprehensive of giving Rivers full reign over the offense (Rivers has only averaged more than three assists per game in one NBA season), the former Duke Blue Devil will be able to contribute positively to the Knicks’ offense and make life easier for some of the team’s younger, more raw players.

By acquiring Immanuel Quickley with the 25th pick in the 2020 NBA Draft, the Knicks’ front office showed that it is more interested in guard prospects who can shoot than traditional floor general players, which could have been obtained by selecting Tyrell Terry, Tre Jones, Malachi Flynn, or Payton Pritchard.

The former Kentucky Wildcat proved himself to be a sniper last year, when he shot 42.8% from three on 4.8 attempts per game. The rest of Quickley’s game is still somewhat raw (he shot higher on three-point attempts last year than he did on two-pointers), but ideally he will be able to come in and impact games from the get-go by knocking down deep shots.

Quickley does not project to be the Knicks’ long-term answer at point guard, having only averaged 1.9 assists in 33 minutes per game last season at Kentucky. Still, a knockdown shooter who can guard smaller wings is exactly the type of player who fits well next to all three of Barrett, Obi Toppin, and Mitchell Robinson.

When juxtaposing last year’s shooting with this year’s, it is important to consider context. While Dotson and Trier shot well, neither saw consistent minutes throughout the year. Portis got his in spite of the fact that he was often playing next to more floor shrinking bigs, making his job more difficult. Rivers, Burks, and Quickley, as well as Toppin, project to fit more seamlessly next to the Knicks’ core young players.

Because he needs to the play next to another big and cannot score efficiently, I am strongly against the return of Julius Randle to the Knicks next season. It is no surprise, however, that his most efficient minutes came when playing next to at least two other shooters. Combining some groups of Morris, Reggie Bullock, Portis, or Maurice Harkless meant that defenses couldn’t focus entirely on Randle when he put his head down and went back-to-the-basket.

Similar logic can be applied should the offense run through Barrett. Barrett is more agreeable as the focal point of the offense because he can attack more effectively downhill, which would open more shots for teammates for threes or opportunities at the rim. Quickley, Burks, and Rivers can all fit next to Barrett as the nominal shooting guard, while Barrett can try to shoulder the bulk of the creation burden.

Similarly, Toppin is a good fit with Barrett, as he can pop out to the perimeter more credibly than Randle and allow Robinson to have free reign in the dunker’s spot on the block or as a screener. Some combination of Payton, Rivers/Burks/Quickley, Barrett, Toppin, and Robinson would all make a lot of sense, and the spacing would lend itself much better to Barrett’s skillset than last year’s did.