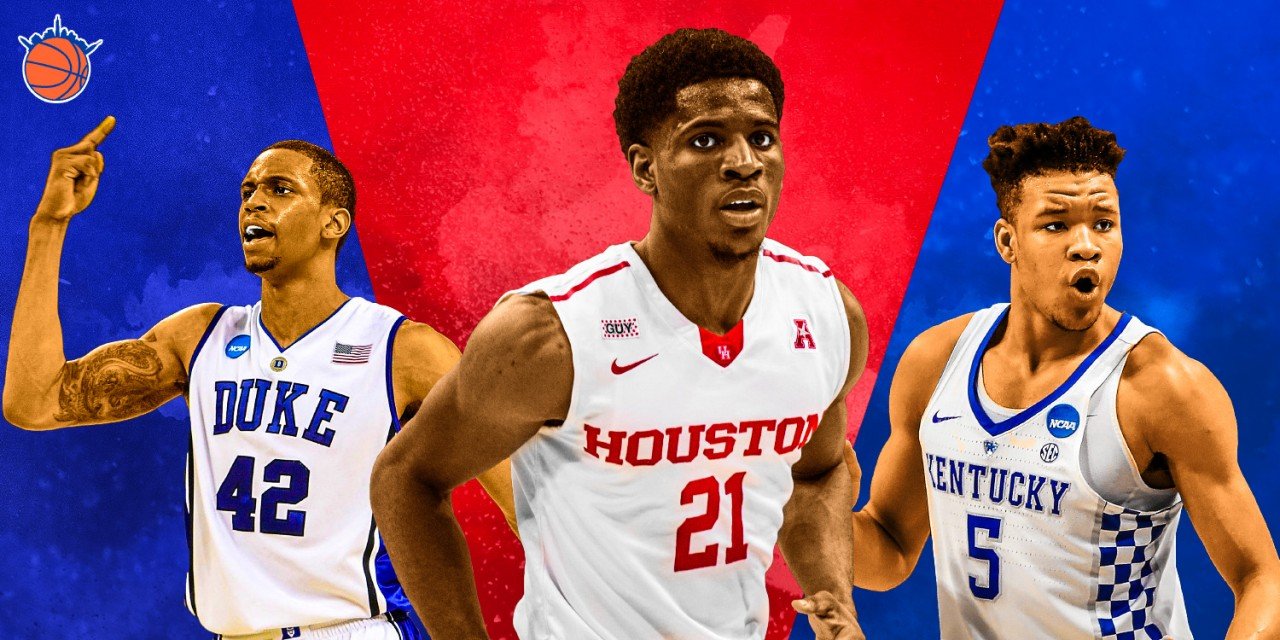 Kevin Knox’s Kentucky and Lance Thomas’ Duke squads aren’t the only teams swept up in March Madness as we run through Knicks alma maters featured in the NCAA tournament.

Watching the Knicks this time of year feels like an act of self-flagellation—something one assumes isn’t the standard sentiment for most basketball fans. No one can blame New Yorkers for turning away from starting lineups that feature Emmanuel Mudiay and Mario Hezonja to instead focus on March Madness and the NCAA.

However, if for some reason you’re choosing to think about the 14-56 Knickerbockers while watching the tournament—at least beyond “Please get Zion next year”—let’s take a look at the connections the Knicks have to the teams on the biggest stage in college hoops.

If you’re reading this, then you have access to the internet, which means you’re well aware of Zion Williamson and this year’s Blue Devils squad. The ACC champions are 29-5 and have been dominant since Williamson returned, and avenged two late-season Zion-less losses to rival UNC with a 74-73 win in the ACC semifinals.

HOLY MOTHER OF GOD WHAT A PASS FROM ZION pic.twitter.com/xqrYkiIzX8

It’ll take more than a blown-out pair of PG 2.5s to dembracerail this team. Duke has more talent than anyone with Williamson, R.J. Barrett, and Cam Reddish, but there are definite weaknesses; the Blue Devils went 2-of-14 from deep in their championship win against Florida State.

Thomas stayed at Duke for four years, winning a national championship in 2010, his senior season. Over the last decade, Coach K has adjusted to the new era of college athletics by embracing one-and-done players like Williamson, Barrett, and Reddish. It’s been four years since Krzyzewski last brought a title back to Durham, but he has more firepower to work with this year than in any other.

Duke was rewarded with the top overall seed and will face either North Carolina Central or North Dakota State.

Another top seed, UNC had a chance to solidify itself as the favorite to win it all in its third matchup with Duke. The Tar Heels only lost by one point, but those two wins against the Zion-less Blue Devils suddenly seem less impressive.

Now 27-6, the Tar Heels looked like they hit their stride after a loss to the now-top-seeded Virginia Cavaliers in February. Carolina had won eight straight before falling to Duke in the ACC tournament.

The tandem of senior Cameron Johnson and freshman Coby White carry the majority of the scoring load for UNC. Both are averaging over 16 points per game, and Johnson is one of the nation’s most accurate shooters, knocking down 46.5 percent of his shots from deep.

Quite a few NBA-caliber shots from Cameron Johnson last night against Duke. His first 7 made field goals came using only 1 dribble. Opportunistic and fluid in transition with a versatile shooting stroke in the half-court. pic.twitter.com/6oZAsOE6vL

Forward Isaiah Hicks has spent most of the season in the G League, playing in only one game for fewer than four minutes this season with the Knicks. He won an NCAA title in 2017—like Thomas it was his senior season—and was the ACC’s Sixth Man of the Year the season prior.

Assistant coach Pat Sullivan also won a title with the Tar Heels in 1993 as a junior.

Losing to Duke cost UNC its chance to be the number one seed overall, but it held on to one of the top four. The Tar Heels play Iona College on March 22.

They opened the season with an embarrassing 34-point loss to Zion Williamson and the Duke Blue Devils, but were able to right the ship as the season progressed. Losses to unranked Alabama and Seton Hall marred their record, but there were also highlights, such as beating the then-number-one seed Tennessee Volunteers by 15. Much like the Knicks’ rookie, Kentucky has been inconsistent this season.

Knox is the only one-and-done player whom the Knicks have ever drafted. In that one year in Lexington, Knox led the team with 15.9 points per game, and after a disappointing regular season in which the Wildcats went 10-8 in conference play, they bounced back to win the SEC tournament. Knox tailed 18 points and seven rebounds in the final against Tennessee and was named All-Rookie and First Team All-SEC.

Kentucky will square off against 15-seed Abilene Christian University, located in Texas and also nicknamed the Wildcats.

Cincinnati earned its revenge on Houston in the American Athletic Conference Championship game. Houston dominated the Bearcats to win the regular season championship, and at 31-2 heading into its game Sunday, it looked prepared for anyone.

An older team, Houston can physically dominate most opponents. Senior Corey Davis Jr. is averaging 16.8 points per game to lead a team that, for the most part, knows what it’s like to play in March. Houston was a six seed last year; it took out San Diego State, but fell to Michigan in the second round.

"The dude is just unconscious."

Corey Davis Jr. hits his EIGTH three of the day for @UHCougarMBK. pic.twitter.com/ZZFb7APmaG

The committee awarded coach Kelvin Sampson and the Cougars a three seed this season. They’ll face Georgia State in the Round of 64.

University of Houston head coach Kelvin Sampson has helped the Cougars go from a struggling program to a top-15 team, and now to the AAC tournament title game.

His success this year makes him a deserving choice for National Coach of the Year, says @JonRothstein. pic.twitter.com/HVxc1mstHM

Damyean Dotson only played his upperclassman years at Houston. After two seasons at Oregon, he was dismissed due to sexual assault allegations. Charges were never filed, but Dotson spent a year at Houston Community College, although he didn’t play. After transferring to Houston for his final two seasons, Dot averaged 17.4 points and 6.9 rebounds per game and was named to the First-Team All AAC in his senior year.

In an ironic twist of fate, the forward whom the Knicks signed through the end of the season, and his alma mater’s luck may be inversely entwined. A former first-round pick by the Pistons, Ellenson signed a 10-day contract with New York on February 20th. A week later, the Golden Eagles went on a four-game losing streak before finally bouncing back with a win against St. John’s in the Big East Conference quarterfinal.

Before Ellenson signed with the Knicks, Marquette was 23-4. It ended up 24-9, which was still good enough to earn a spot playing 12-seeded Murray State. However, as fun it is to speculate about Ellenson jinxing his old team, the more likely answer to their late season swoon can be found in junior point guard Markus Howard’s injured wrist.

The newly named Big East Player of the year has nine 30-plus-point games this season. He scored 40 points in a half versus Buffalo and 53 points against Creighton. But in the Golden Eagles’ last game against Seton Hall, although he was able to put up 21 points, Howard went just 1-of-15 from the field.

Howard will have a chance to showcase himself against the best right away, as Murray State’s Ja Morant is expected to be drafted in the top five this year.

That is not a typo. (?@Wendys) pic.twitter.com/dRFRIDmxOE

Ellenson nearly averaged a double double in his one year at Marquette, with 17 points and 9.7 rebounds a game. In eight games with the Knicks, he’s averaging 4.6 pints and 3.3 rebounds.

Why spend your whole day just waiting for Zion? When you’ve called in sick to work in order to spend your day flipping between CBS, TBS, TNT and TruTV, you need as many rooting interests as possible. Gambling (in New York) is still illegal, but it may not stop these Knicks.

If Kentucky gets upset by Houston in the Round of 16, watch out for Kevin Knox in some Cougars gear should there be a friendly wager inside the Knicks’ locker room.