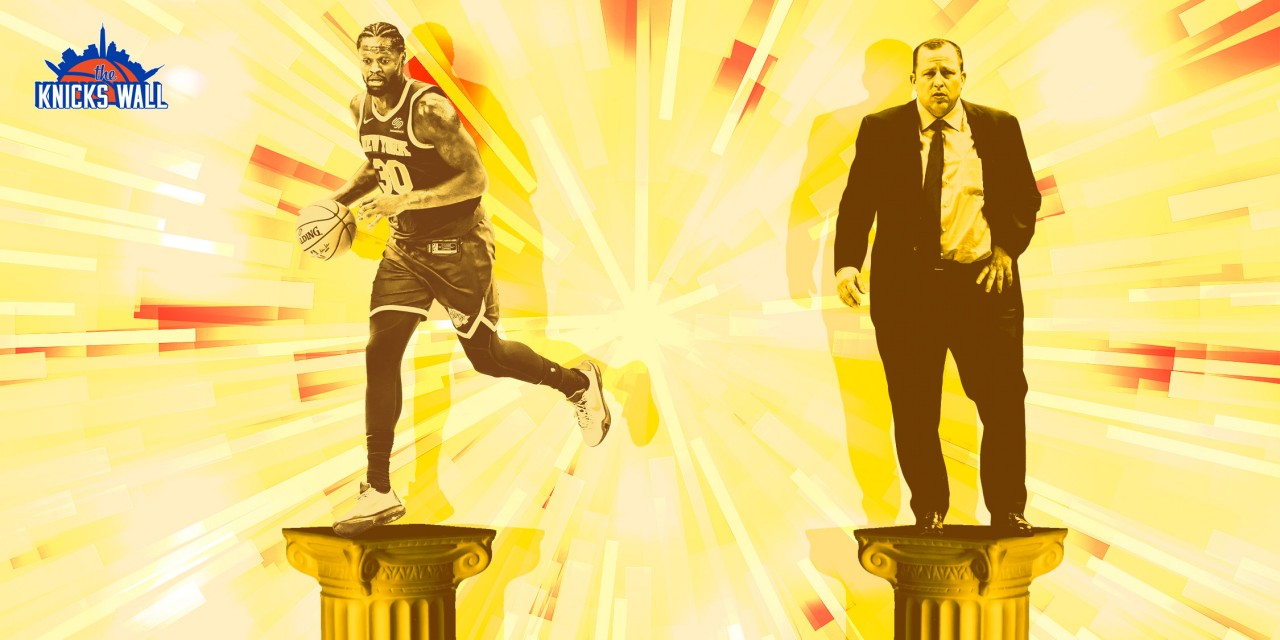 They may not be front-runners, but the Knicks’ Tom Thibodeau, Julius Randle, and Immanuel Quickley all have compelling cases for awards.

A New York Knick hasn’t won a major end-of-season award since J.R. Smith was the NBA’s Sixth Man of the Year in 2012–13. Fittingly, as the franchise is playing its best basketball since that 54-win season, Immanuel Quickley, Tom Thibodeau, and Julius Randle all are being mentioned in the discussion for the Rookie of the Year, Coach of the Year, and Most Improved Player, respectively.

Immanuel Quickley: Rookie of the Year

Before Charlotte Hornets guard LaMelo Ball fractured his right wrist, the Rookie of the Year race seemed all but sewn up. Ball had been averaging 15.9 points, 5.9 rebounds, and 6.1 assists per game while shooting 45.1% from the floor and 37.5% from deep. Additionally, since being inserted into the starting lineup, Ball upped his points per game average to 19.5, as well as his field goal and three-point percentages to 46.4% and 42.6%, respectively.

The NBA had all but engraved the trophy in his name when the news of Ball’s injury reopened the race. With the season more than halfway over, three names have come to the forefront thus far: first overall pick Anthony Edwards of the Minnesota Timberwolves, should-be-a Knick Tyrese Haliburton of the Sacramento Kings, and Quickley.

Edwards is the classic high pick on a bad team putting up (steadily improving) numbers and making highlight-reel dunks. If the Rookie of the Year should be the potential best player of the draft class, then Edwards would be the non-LaMelo choice—he’s shown the most superstar upside.

Both Haliburton and Quickley are poised to make runs at the award, as of March 26th, the rookies are averaging 13.1 and 12.8 points per game, respectively. Additionally, they’re both doing so on just over 10 attempts per game.

Haliburton’s been a much better facilitator than Quickley, averaging five dimes a game, versus just 2.3 for Quick. Both are taking just over five threes a game, but Haliburton is hitting 43.6% of his, while Quickley is hitting 37.6% of his.

However, Haliburton is playing around 30 minutes per game and Quickley is averaging 10 fewer minutes per game. Comparing the numbers between the two guards’ per-36 figures, the case for Quickley manifests, particularly when it comes to getting to the line. Yes, Quickley is averaging 23.1 points per 36, while Haliburton averages 15.7, but it’s Quickley’s ability to get to the line that shines through here.

He gets to the free throw line 5.9 times per 36 minutes while Haliburton gets there just 1.2 times per 36. This is what gives Quickley the advantage in Player Efficiency Rating, his sitting at 17.4 to Haliburton’s 17.1.

However, the fact that the Knicks are around .500 (one game above as of last night) while the Kings at 20-25 may end up being the deciding factor should the race come down to the two of them.

Tom Thibodeau: Coach of the Year

There is no way to watch the 2020–21 Knicks and not see the impact of head coach Tom Thibodeau. The stark contrast of over a season of David Fizdale does help illustrate the case, but any time a coach earns more wins by the trade deadline than a predecessor did in 104 games, they deserve to be in the conversation even absent any additional context.

Seeing how this Knicks team plays night in and night out is a testament to how much having an actual NBA coach can do for a franchise. Effort is pretty much unquantifiable, but you can see it on the floor every night. They rarely get blown out—especially recently—they’ve lost some heartbreakers lately and while moral victories aren’t actual victories, it’s nice to have losses that hurt again. During previous seasons, those games would have been over by halftime and we’d all be numb.

Now the development of Randle and R.J. Barrett, along with the emergence of Quickley, have done wonders for the team, and to credit Thibodeau with the team’s improvement is in no way discounting the work they put in during the offseason. However, when a team goes from 23rd in Defensive Rating to (as of Friday) third—under a coach known for his defensive scheming—then that coach clearly deserves award consideration.

Yet, Thibs isn’t the favorite to win. Utah’s Quin Snyder has the Jazz in first place in the Western Conference and, despite a shortened season, they’re on pace to easily eclipse their win total from last year. While known for their defensive prowess, Snyder has the Jazz playing at an elite level offensively, they’ve risen from being 11th in the league in Offensive Rating last season to being fourth this season.

They have also topped in the league Net Rating, at +8.6, up by 6.1 points from last season. All without any major offseason additions.

If Thibs is going to make a real crack at winning Coach of the Year, not only will Utah have to slip, but the Knicks will have to climb. If at season’s end the Knicks have managed to clinch the fourth-seed in the East, then the conversation may begin to swell.

But personally, the Knicks hosting a playoff series would be reward enough in and of itself, still, a trophy for Thibs would be a nice bonus.

Julius Randle will win the Most Improved Player award, or at least so Vegas believes. Randle’s leap is something that has to be seen to be believed—and even then it can be hard to fully accept.

While having an actual coach certainly helps put players into a better position, no one expected Randle to look like an entirely different player. His previous peak came two seasons ago in New Orleans, he averaged 21.4 points, 8.7 rebounds, and 3.1 assists.

Last season, he averaged 19.5 points, 9.7, rebounds, and 3.1 assists per game but did so on his lowest field-goal percentage since what was, in essence, his rookie year. (Randle broke his right leg 14 minutes into his first NBA game and thus missed his entire true rookie campaign.)

After last year’s season was suspended due to COVID-19 and the Knicks weren’t invited to the Orlando bubble, Randle returned to his hometown of Dallas with longtime trainer Tyler Relph and, according to Mike Vaccaro of the New York Post, the two of them spent the nine months they had together doing footwork drills, working out and putting up shots every single day.

Those efforts have paid off thus far, as Randle is averaging career-highs nearly across the board with 23.0 points, 10.8 rebounds, and a startling 5.8 assists per game. Additionally, he’s taking and making more threes than ever before, with 42.3% of his 4.7 attempts per game going in.

While his playmaking and shooting have been the most noticeable improvements, Randle’s defense has been spectacular as well. 0.9 steals and 0.2 blocks per game may not stand out, NBA.com’s defensive win shares statistic lists Randle behind only LeBron James, Mike Conley, and Rudy Gobert.

At 26, Randle has blossomed into a full-fledged two-way star, his growth as a player has been essential to this Knicks team.

Randle’s biggest competition for this hardware likely comes from Detroit’s Jerami Grant, whose statistical improvements may top Randle’s but have not translated into team success in the same way.

Ironically, Randle’s development may have overshadowed his teammate, Barrett’s, own darkhorse campaign for Most Improved Player, but that’s an article for another day—and with the Knicks sniffing a playoff spot it doesn’t appear like anyone is complaining.