Why Jrue Holiday Should Be on New York’s Radar 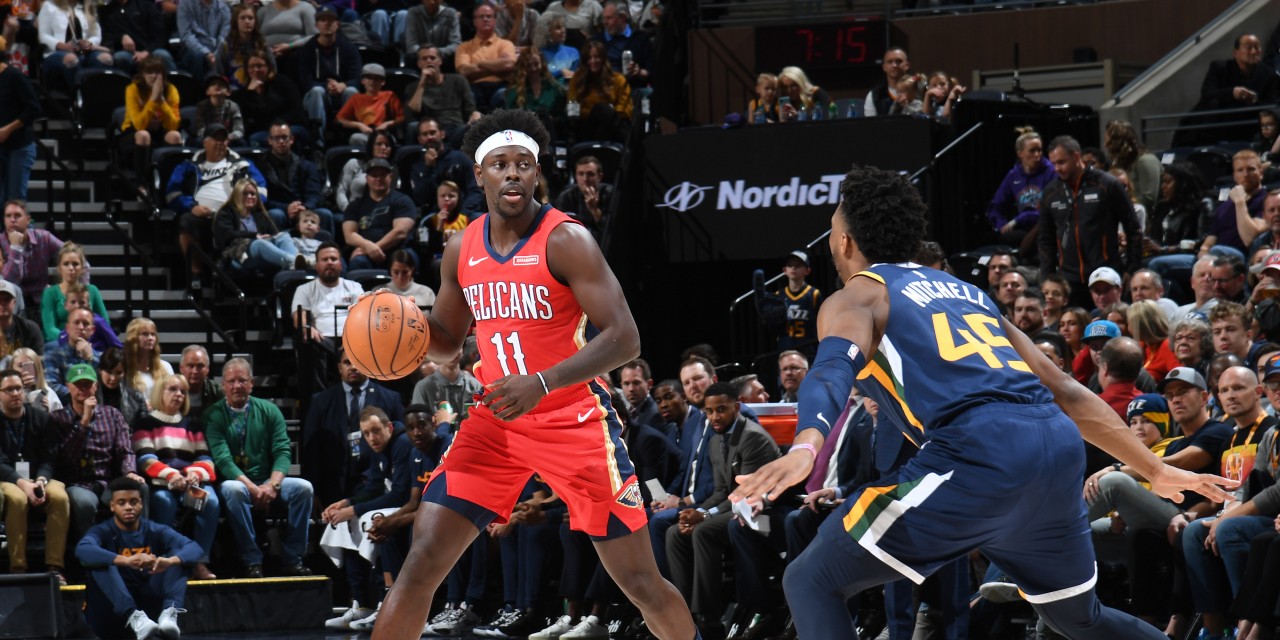 The Pelicans All-Star guard Jrue Holiday is rumored to be getting shopped, but the Knicks don’t fit the bill as a contender. Should they pursue a trade anyway?

A recent report from The Athletic’s Shams Charania said that an All-Star guard is available for trade. No, it’s not Chris Paul, but rather Jrue Holiday of the New Orleans Pelicans. Charania’s report said that several contenders were vying for the 6-foot-3 guard’s two-way talents. The New York Knicks don’t fall under that category, but should they look into acquiring him, too?

Trading for Holiday would be similar to trading for Paul. Both guards would provide desperately needed backcourt stability for the Knicks. Paul is undoubtedly the better player—and, for what it’s worth, close with New York president Leon Rose—but Holiday also produces well on both ends of the floor.

Over the last three seasons, the Holiday averaged 19.7 points on 47.5% shooting from the field, with 6.8 assists and 1.6 steals per game. His top-notch defense has earned him All-Defensive honors in 2017–18 (first team) and 2018–19 (second team). The 30-year-old finished with 18 points in voting for the 2020 season, the third most amongst guards who didn’t qualify for either team.

Holiday can organize the offense and score effectively. He is adept at scoring close to the hoop, making 4.2 field goals within five feet of the basket, the seventh most amongst guards last season. In isolation situations, as tracked by NBA.com/Stats, Holiday is in the 88th percentile. His playmaking is strong, too, as he ranked in the top 20 in assists per game in each of the last five seasons.

It goes without saying that Holiday’s defense would greatly benefit the Knicks. He’s engaged on and off the ball, strong against post-ups and his hands are quick and active. He deflected the most passes in the league last season and was second in deflections per game. He and Frank Ntilkina would raise hell for opposing guards together.

While Holiday’s talent obviously makes him an ideal addition for the Knicks, his age and contract suggest his fit on the young, rebuilding team would be awkward.

On the cusp of exiting his prime years, Holiday has only won two playoff series in his career. Former All-Stars with little postseason success belong on contending teams for their own sake. Still, Holiday would benefit a young team by offering someone the youngsters can lean and depend on offensively and defensively.

Holiday has one more guaranteed year on his contract worth $26 million. The following year contains a player option worth $27 million. His contract is pricey, but it’s not a complete rip-off. Holiday’s paycheck from last season ranked 43rd in the league, which is right about where Holiday ranks as a player.

New York’s collection of young players on cheap deals has gotten them nowhere in the past few seasons. Bringing in a stable, established floor general to help the developing youngsters on the court would be a wise investment for the right price.

So, what would the ideal trade package be? New Orleans is about to begin a rebuild but already has several good, young players on board. The Knicks only have a few of those, the actual amount of which depends on who you ask. Regardless, giving up any of them for Holiday, a fringe star entering his 30’s, would be unwise.

What New York does have—and should not be as reluctant to trade away—are young players with more uncertain futures and draft picks. If Dennis Smith Jr., Kevin Knox, one of the Mavericks’ picks or a second-round pick is the only asset going New Orleans’ way, New York should pounce.

But an offer like might not be very enticing for the Pelicans. They have the leverage because they, not Holiday, are looking for a trade, so they don’t have to accept a lousy package just so they can get something. If an unproven young player or late pick is the crown jewel of the Knicks’ offer, Pelicans brass would probably see the package as a cardboard crown from Burger King.

Due to the complications with concocting a deal where New York doesn’t give up too many assets but is still worthwhile for New Orleans, the Knicks would be better off finding a veteran point guard in free agency, like Fred VanVleet. The ideal veteran guard for New York to acquire via trade is Chris Paul, whose top-tier playmaking and efficient perimeter shooting make him well equipped to aid the development of the young Knicks.

Still, Holiday is worth keeping an eye on. His two-way talents would be very useful and utilizing a good point guard—while also being a refreshing and new sight for the Knicks—would stabilize the core of young players.

»READ: Would the Knicks benefit from rolling the dice on a Victor Oladipo trade?