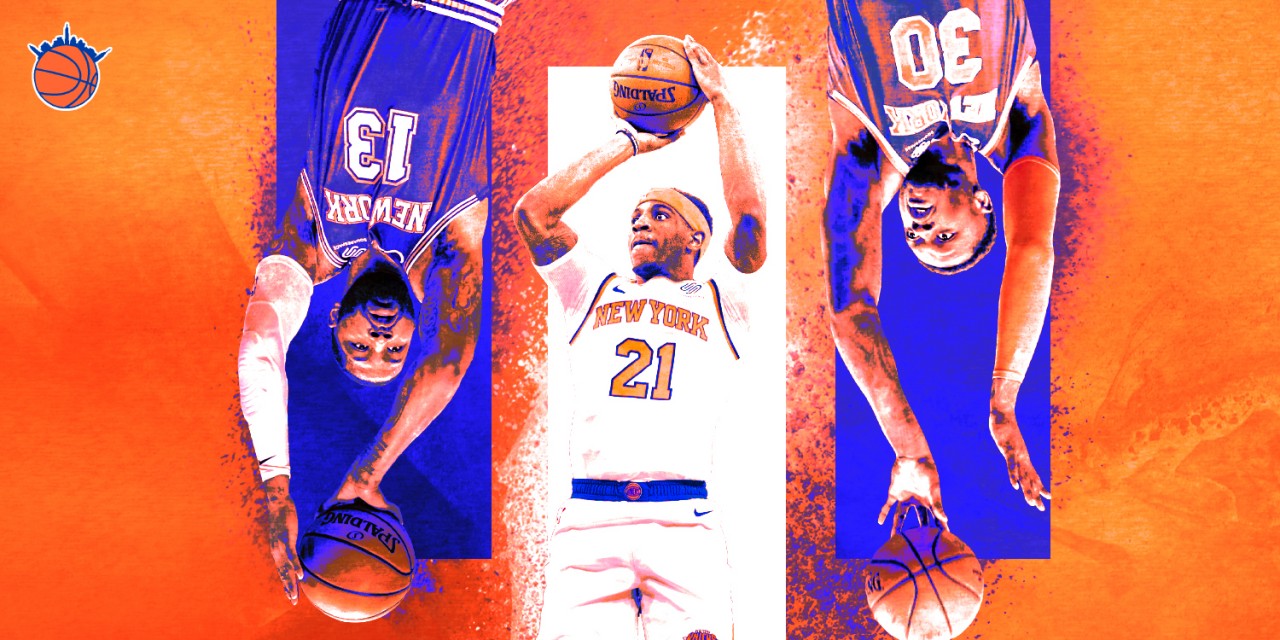 The Knicks’ penchant for hoisting up three-balls pairs quite well with formerly contending for the playoff. No wonder they’re not close in either regard lately.

The Knicks have been tough to watch this season. The main reason is because they can’t do what’s the most essential skill in the game of basketball: shoot. More specifically, the Knicks can’t shoot from three-point range in what’s been a failure by the organization to adapt to the modern NBA.

In each of the past 10 seasons the league-wide team three-point attempts per game has increased, nearly doubling from 18.0 in 2010–11 to 33.6 in the current season.

This isn’t just an increase—it’s a drastic increase. The Knicks haven’t shown that they understand this concept at all, as they’ve not only ranked in the bottom 10 in the NBA in three-point attempts for the past six seasons, but they’ve ranked in the bottom half of the NBA in three-point percentage five of these six seasons. It’s no coincidence that the team has missed the playoffs in every single one of these six years. 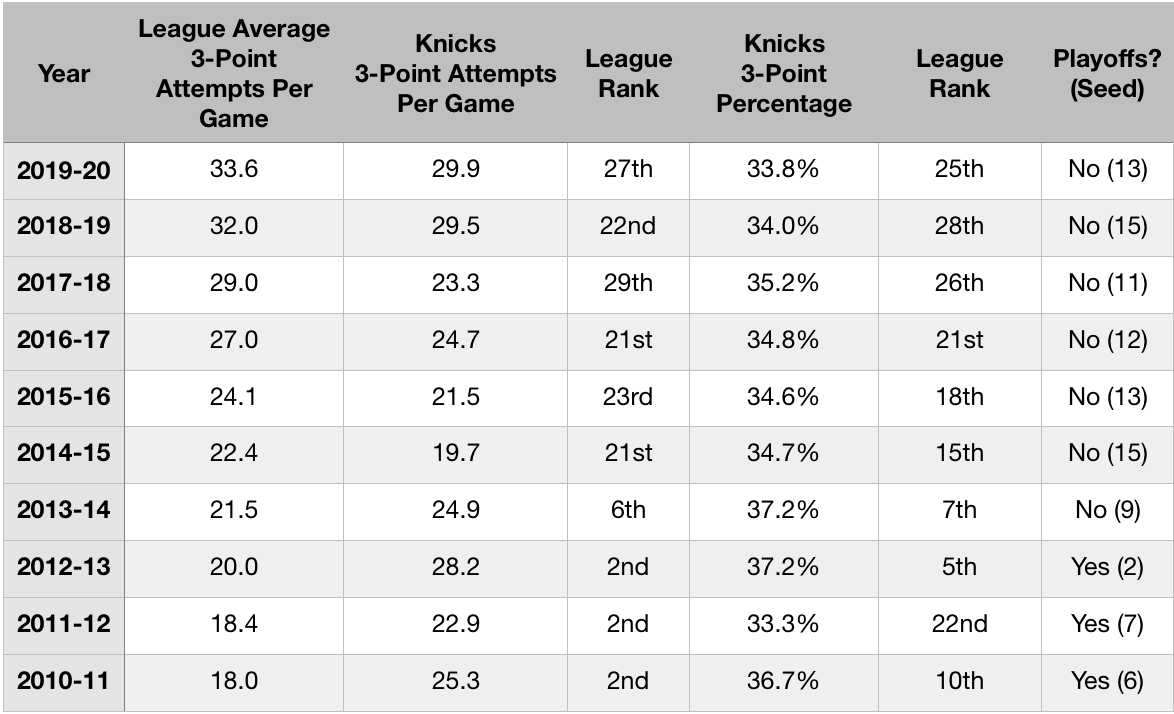 What makes this lack of three-point shooting this season compared to the previous five even more unfathomable is how much cap space the team had in the offseason. Yes, we know that they struck out with top targets, but it almost feels like the organization signed everyone in the free agent pool who couldn’t shoot.

This excludes Marcus Morris, who’s currently shooting 45.0% from beyond the arc. Not only is this far and away the best three-point percentage of anyone on the Knicks, but it ranks fourth in the entire NBA. In terms of the rest of the roster, only one player other than Morris who’s shooting above 35% and that’s Bobby Portis, shooting 36%. However, Portis, who was signed to a two-year, $31 million deal in free agency, is pretty much flawed in every other facet of his game which sours his decent shooting ability.

Looking at the other free agents the Knicks signed, the next best shooter is Reggie Bullock, who’s shooting 34.4% from three. Bullock hasn’t shot that poorly from the outside since his second season in the league. Wayne Ellington, another free agent the Knicks signed as a three-point specialist, is shooting 30.9% from beyond the arc, the worst percentage of his career; he’s a career 37.7% three-point shooter. To add, Julius Randle is shooting 28.3% and Elfrid Payton is shooting 23.5% from three.

Not to mention, the Knicks’ recent draft picks have also been shooting poorly from three this season. Frank Ntilikina, R.J. Barrett, Kevin Knox, and Damyean Dotson are all hovering between 31.1% and 33.6%.

Going forward, it’s crucial that the organization prioritizes this problem in order to start moving in the right direction. As we’ve seen with the Golden State Warriors, shooting plays an integral role in building a championship foundation.

Another example of a team that has capitalized on building a roster based upon shooting is the Miami Heat this season. Miami was supposed to be a playoff team, but a lower-tier one. However, in the offseason, in addition to signing Jimmy Butler, they added Tyler Herro through the draft along with Kendrick Nunn. Herro is shooting 39.4% from three while Nunn is shooting 35.6%. They also have developed Duncan Robinson, who was a G League player for much of last season, into a starter this season. Robinson is shooting 43.4% from three this season. As a team, the Heat rank second in the NBA in three-point shooting percentage at 37.7%, and have the third-best record in the East at 31-14.

For the Knicks, focusing on shooting can start as soon as this trade deadline hits. The organization will almost certain look to unload players, but what will they get in return? Can they acquire any younger shooters for the veteran trade pieces they have?

Another creative approach the Knicks can take to look at acquiring a veteran shooter in a bad situation. For example, Buddy Hield has fallen out of favor and Sacramento and has been moved to the bench. He shot over 42% from deep in 2017–18 and 2018–19. Maybe that’s a route the Knicks look at.

If nothing develops at the trade deadline, the Knicks must make sure the land a guard who’ll be able to shoot in this upcoming draft. None of the top prospects such as Anthony Edwards, LaMelo Ball, or Cole Anthony have shot well where they’re playing this season, but it’s a very small sample size. It’s crucial that the Knicks don’t end up with the guard who can’t shoot.

Moving on to free agency in 2020, the talent level is nowhere near what it was in 2019. However, there are players the Knicks can target to help fix their shooting issues. The big name target and also extreme long shot is Raptors guard Fred VanVleet. VanVleet’s averaging 18.3 points and 6.8 assists per game while shooting 39.8% from downtown. He’s likely to get a max deal or close to it, but if he’s going for anything cheaper than that the Knicks should target him. Another upper-tier target would be a player like former Knick Danilo Gallinari, who’s averaging over 19 points per game and shooting over 40% from deep. That being said, he’s also another extreme longshot.

More realistic Knicks targets would be lower tier players such as Joe Harris and Malik Beasley. Both players have shot over 40% from beyond the arc for at least one season within the last three years.

Knicks fans are unanimous that, in addition to hoping New York moves closer to a 25-30-win season than in the teens again, they want the team to be watchable. Fans want a team with players like Carmelo Anthony, J.R. Smith, and Steve Novak that you know are going to hit the shot if they get an open look.

While the Knicks are very far from being a good basketball team, the first place to start heading in the right direction is getting players who can shoot from distance. Ultimately, that decision will be up to Steve Mills, Scott Perry, and whoever else is making basketball decisions in the near future.

»READ: Mike Miller may have found the lineup to get the Knicks going