The 2020 free agency class isn’t chock full o’ studs, but the Knicks could still spend this offseason on high upside signings for their roster.

When NBA free agency starts, this offseason is going to look different. Due to COVID-19, the removal of fans from games, and the subsequent switch to the NBA bubble in Orlando, teams are going to be aggressive. Expect to see money shuffling in the form of trading players to dump salary, lopsided deals to drop their overall salary number.

The same will happen on the player’s side with a murky offseason ahead. Player options will be huge, with the likes of Orlando’s Evan Fournier and Boston’s Gordon Hayward reconsidering their stance on their options. Do they opt out to secure more money at a lower cap number over multiple years, or do they opt in, secure their 2020–21 pay, and hope the market stabilizes the following season? It’s something to think about.

Regardless, money will move around the league. Six teams in the league are projected to have a moderate amount of cap space, with four teams (New York, Atlanta, Sacramento, and Detroit) having upwards of $30 million to deal with, per Spotrac.com. Sacramento is rumored to be looking to contend, while the Hawks have been rumored to be looking to move the sixth overall pick in the 2020 NBA draft, with an eye on a playoff spot next season.

The Knicks are sitting with a projected cap space amount of $48 million. At 21-45 last season, and with a talented 2021 draft class looming, there are reasons for the Knicks to potentially hold off. However, New York should not only be aggressive in free agency but should look to come away from this offseason with two starters.

Getting the youth over the hump and shaping the roster

After five top-10 picks within the last seven seasons, the Knicks need something to get their younger players over the hump, whether by bringing them along slowly, or by creating a proper roster and slowly incorporate them into it. I’m suggesting the latter.

The likes of Mitchell Robinson, R.J. Barrett, Frank Ntilikina, Kevin Knox, and Dennis Smith Jr. are all young players under the age of 23, but none of them have flashed star abilities yet. New York cannot maintain a roster with six players needing to find their game. Of all the moves Tom Thibodeau can make in his first season, the most critical is to select a handful of the young players listed above, attempt to develop them, and move on from the rest.

From that point, New York could properly shape the roster using the free agency period. Of the six players listed above, the weaknesses of the group are apparent. Shooting percentage among these players is lackluster, and only Robinson and Ntilikina have had stretches of solid defensive play in their NBA career.

A lead guard with some experience, think Oklahoma City’s Chris Paul, would do wonders for the likes of Knox, Ntilikina, Barrett, and Robinson—allowing them to find their spots while orchestrating the offense. Paul’s combination of experience, passing, and defense at the lead guard spot would help Robinson, like Tyson Chandler and DeAndre Jordan of yesteryear.

In an offseason that feels endless, the Knicks have several options to use their cap space and their draft picks. However, a proper direction would allow them to better capitalize on their assets.

New York’s cap sheet: Who are you going to pay?

The conversation surrounding New York’s potential free agency plans is centered on preserving cap space to go big-game hunting when the time is right. The current question for New York’s current roster is simple: Who are the Knicks paying in the near future? Let’s take a quick look at New York’s current cap sheet. 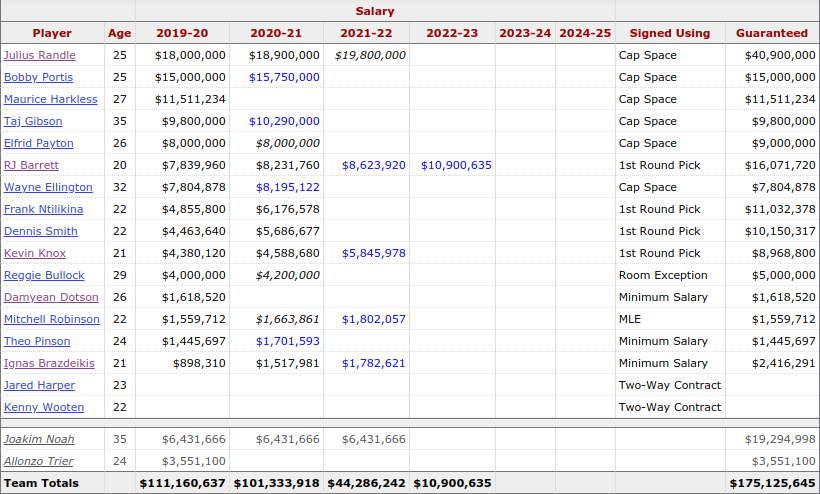 Kevin Knox’s fourth-year option will be an interesting point of contention. Will the Knicks give Knox another season to prove himself or cut bait? They’ll have to make a decision soon. Outside of Knox, the Knicks will have Mitchell Robinson, Frank Ntilikina, and Dennis Smith Jr. to figure out. If retained, both Ntilikina and Smith will have taken team-friendly deals. Robinson is the big fish, who could see a sizable contract after three years on a second-round rookie contract.

Even then, the Knicks could find a number that helps both Robinson and the team. As a restricted free agent, the Knicks will be able to match any deal—a tool in NBA free agency that, unfortunately, assists in suppressing salaries. While Robinson is a bright spot on New York’s roster, he’s struggled to stay on the floor due to foul troubles and has his upside limited as a rim-running big man. Something between $13-15 million over four seasons would be a fine balance for both sides.

While the Knicks should be hesitant to use all their cap space this offseason, there is a lack of young players to sign moving forward, and a bushel of cap space. New York could pay a few players and maintain a relatively clean cap sheet as they move into the free agent classes of 2021, 2022, and 2023.

Establishing a culture for the team’s next superstar pursuit

If there’s one thing we’ve learned over the last 20 years, it’s that players are not coming to the Knicks just to join the big market of New York. In this current climate, superstars are more demanding of teams, and that “this is New York, you should be honored to play here” attitude isn’t going to assist in luring a superstar to New York.

Kawhi Leonard pushed Los Angeles to add another superstar before completely committing to the Clippers, while the Lakers, LeBron James, and Klutch Sports put the full-court press on Anthony Davis before acquiring him in the offseason. Jimmy Butler opted for Miami’s culture over Philadelphia, while Kevin Durant and Kyrie Irving selected Brooklyn over the Knicks. These superstars went to new teams with the idea of winning, based on their cultures.

Consider the Knicks’ current status as a blind résumé: a top-three market in the league, seven first-round picks over the next four seasons, and a relatively clean cap sheet. Any fan would take that, any front office executive with an eye on the job would take that, and any free agent would be intrigued. But throw in the last 20 years of the Knicks and their on- and off-court struggles, and it’s not enough to lure big-name players.

Proper spending in free agency, stability in the front office, and accumulating wins over the next two or three seasons would go along way to helping the franchise when the next superstar hits free agency.

An idea and offseason strategy

As the TKW free agency app shows, the Knicks have several options this offseason that would allow them to get better on the court without hampering their chances in the 2021 draft lottery. A respectable offseason would have New York looking at a projected win total between 28 and 35 wins.

One intriguing hypothetical scenario would be selecting Kira Lewis Jr. with the eighth overall pick, trading up to select TCU’s Desmond Bane, while signing Fred VanVleet and Jerami Grant.

I suggested VanVleet as New York’s number one free agent target this offseason, and I’m still there. VanVleet gives New York the combination of shooting, defense, and ball handling missing from the roster the last few seasons. Jerami Grant had an excellent stretch in the regular season and postseason bubble, and could be the floor-spacing, defensive-minded forward who works alongside Mitchell Robinson.

Even though Auburn’s Isaac Okoro is the more popular name for the Knicks, Kira Lewis has the size, speed, and ability to be the drive-and-kick point guard for Thibodeau’s offense. Thanks to VanVleet’s experience playing alongside Kyle Lowry, the Knicks could play Lewis alongside VanVleet in stretches without much issue. As a late first-round pick, Bane would come off the bench, but could be a 3-and-D wing player who can contribute right away.

In total, three of the four players have the ability to improve the Knicks’ two biggest weaknesses—defense and shooting. Lewis offers New York a starting point guard option for the future. His speed and dexterity attacking the rim has been missing from recent New York guards. With VanVleet in place, Lewis could be brought on slowly, as opposed to the team’s previous draft picks.

The New York Knicks have cap space, and while the idea of staying the course and allowing the young guys to run and get playing time seems like a wise idea, the Knicks have to start moving in a positive direction. Adding players who can help improve the roster would be a smart way to go, even if it pinches New York’s flexibility.

This offseason doesn’t have that elusive star player for which the Knicks are looking. However, the class offers various point-guard options, a few low-level wing players, and a handful of power forwards that are better fits alongside Robinson at the center position. With several draft picks, an eye on a star player, and a relatively empty cap sheet, the Knicks would be wise to take a chance on some smart free agency bets to help them win—and maybe improve their chances when the next superstar opportunity arises.