Why the Knicks Fired Jeff Hornacek (Plus a Coaching Search Primer) 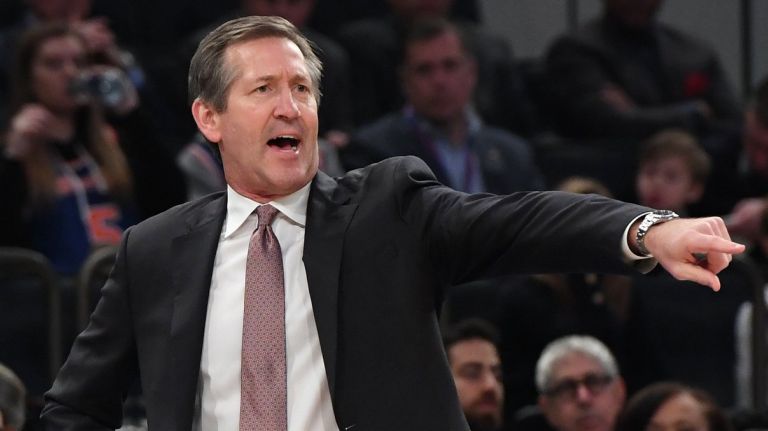 The Knicks have moved on from Jeff Hornacek, putting them in the market for a new head coach. Why is he gone, and who will the Knicks target to replace him?

In a widely anticipated move, the Knicks fired Jeff Hornacek late Wednesday night, hours after his second season with the team wrapped up. Hornacek, who had one year remaining on his three-year deal, oversaw a 60–104 record in New York. Assistant coach Kurt Rambis was also let go.

Hornacek expressed desire to see his contract through: “That’s why you sign contracts. I have one more year. We’d love to continue with these guys and get some of the guys healthy and get back at it and continue that process. We didn’t think it was going to be a one-year turnaround.”

Yet, he was dismissed before even getting an exit interview to plead his case.

His tenure was undoubtedly mired by front office drama, major roster upheaval, and unfortunate injuries. Still, his performance as a tactician could not overcome his inability to connect with players and limit locker-room distractions. GM Scott Perry clearly wants to hire his “own guy”—evidenced by the front office’s lack of public backing for Hornacek.

“Jeff is a true professional who has worked tirelessly for this organization the last two seasons,” said president Steve Mills and Perry in statement. “We sincerely appreciate his efforts and considerable contributions to the team and wish him well in his future endeavors.”

We’ve assessed Hornacek’s performance on multiple occasions recently at The Knicks Wall, so I won’t totally rehash it here. But before we look ahead, let’s recap some of the good and the bad.

Where Hornacek deserves credit: Despite the injuries, losing, and talent dearth, the 2017–18 Knicks recorded the highest field-goal percentage in 18 years (46.3 percent) for the franchise, and racked up more assists than any Knicks team since the mid-‘90s (per the New York Post). Yet they were never able to generate an above-average offense under Hornacek, finishing 18th and 20th, respectively, in offensive efficiency in his two seasons. This can be largely attributed to their dismal output from downtown. The Knicks finished 24th in three-pointers made in 2016–17, yet somehow did worse (29th) post-Triangle. Overall, they played at a middling pace with limited spacing—things Hornacek implemented much more successfully in Phoenix.

On the other side of the ball, the Knicks were in the bottom five in defensive efficiency for both of Hornacek’s seasons, and he never established an identifiable defensive approach. Losing KP’s rim protection was devastating.

He does, however, deserve some dap for overseeing the initial stage of Frank Ntilikina’s development into a lockdown, versatile defender. Hornacek also gets some credit for the emergence of Trey Burke, though he failed to garner any improvement out of Emmanuel Mudiay.

He also irked a bunch of veterans along the way, and has already accumulated a disturbing history of run-ins with his players at both stops in his still-brief coaching career.

All of that is over now, and the Knicks will need to bring in someone with a stronger presence, more convincing leadership qualities, and a knack for player development. We’ll provide more detailed breakdowns of the candidates as the search heats up, but for now, here’s a basic primer of some names to watch:

–Mark Jackson: He’s popular with many Knicks fans, and he compiled a solid record in his three years leading Golden State. Of course, his performance in the Bay has become less impressive with Steve Kerr’s immense success. Jackson’s Warriors reign was also mired by weird scandals and internal dysfunction.

–Jerry Stackhouse: Stackhouse just led the Raptors 905 to the G League final, and the former NBA scoring-title winner is considered a rising coaching star, thanks to his combination of tough-mindedness, forward-thinking ways, and expertise working with younger players.

–David Fizdale: After winning rings as an assistant in Miami, Fizdale led a half-washed Grizzlies team to 43 wins in his lone full season before being abruptly fired in November after beef with Marc Gasol. He seems to be widely beloved with players around the league and possesses a charismatic personality.

–David Blatt: He’s been a buddy of Mills’ since their days on the Princeton basketball team. In his year-plus stint in Cleveland, he made the Finals, was openly disrespected by LeBron in the playoffs, and finally fired (by LeBron) the following winter. He’s since been coaching Darussafaka of the Turkish Super League and the EuroLeague. Hiring Blatt would make Knicks fans furious, so he’ll probably get the gig.

Some notable longshots that have been floated out there (credibly or not):

–Doc Rivers: Doc brings tons of experience and regained some credibility this season by leading a ragtag Clippers group to the precipice of the playoffs. The former Knicks player has one year left on his lucrative deal, so acquiring him might cost compensation.

–Jeff Van Gundy: The fact that the former Knicks coach agreed to head up the 2017 FIBA AmeriCup team and the 2019 FIBA World Cup squad has raised speculation that he’s had enough of incessantly complaining about officials broadcasting and is looking to get back in the coaching ring.

–Craig Robinson: Also a former Princeton teammate of Mills, Robinson currently serves as VP of player development and G League operations for the Knicks. He’s highly regarded in the organization, and his skills align with the Knicks’ current priorities. He previously served as head coach at Brown and Oregon State. Plus, maybe he could bring in his sister or brother-in-law when the team needs some inspiration.

Finally, just to finish with a quick story (apologies for those who heard this on the TKW pod): I happened to attend the Charles Oakley game last February, which took place amid escalating tensions in the Phil-Carmelo feud. In his pregame comments, Hornacek discussed his eagerness to move past the drama. Instead, a skirmish between two of the most famous people associated with the franchise broke out by the Knicks bench two possessions into the game. I can vividly recall watching Jeff react to the unwelcome commotion: he just threw up his arms as if to say, “Now what?” For me, that will be the defining image of Hornacek’s tenure: exasperated, out of answers, and unable to escape distractions.