Will Cam Reddish Make NBA Teams Regret Passing on Him? 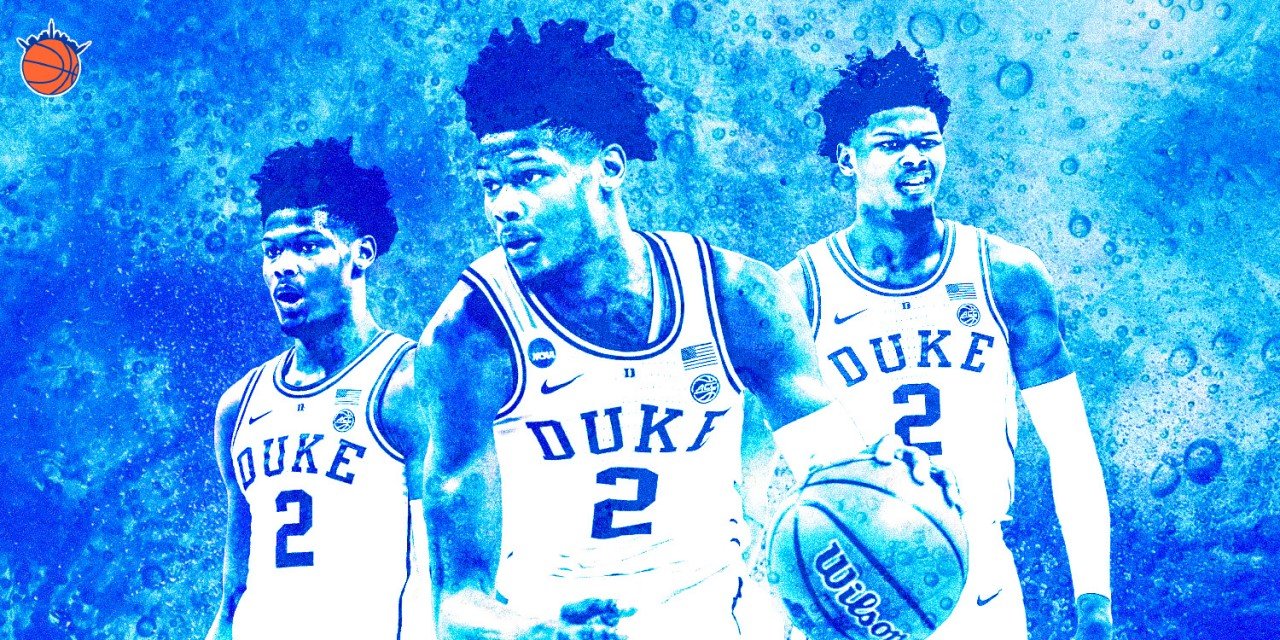 A disastrous one-and-done season at Duke for Cam Reddish has the 20-year-old falling down draft boards. We dive into the swingman’s game.

The Knicks Wall is setting a spotlight on the top prospects in the 2019 NBA Draft. Follow along with weekly features on the draft and players. Next up is Duke swingman Cam Reddish.

It was all good just a year ago for Cameron Reddish.

Last summer, the expectations and praise were high for Reddish. He came to Duke as a highly-touted prospect, after a solid career at the Westtown School (PA), where he was a multi-year starter, Pennsylvania’s Mr. Basketball, McDonald’s All-American, and a consensus five-star and top-five nationally ranked recruit.

The kid who once raked in high-major Division I offers as an underclassman still with braces was set to take the college basketball world by storm alongside two other high-school stars with similar credentials, Zion Williamson and R.J. Barrett.

Fast forward almost a year later, and while Reddish is still widely projected as a first-round pick in the upcoming NBA Draft, the praise has faltered a bit. To some NBA fans, he’s become a disappointing consolation prize for missing out on the other two members of the Duke trio. Pundits often allude to his tendency to fade into the background behind Williamson and Barrett while those two soaked in the limelight.

In his lone season at Duke, Reddish started 35 of the 36 games he played in. Throughout the year, he averaged 13.5 points, 3.7 rebounds, 1.9 assists, 1.6 steals, and 2.7 turnovers. He shot just 35.6% from the field overall and 33.3% from long range. His production didn’t exactly match his preseason expectations, but that hasn’t hampered his draft stock or stopped him from earning an All-ACC Honorable Mention (Basketball-Reference).

There were certainly some highlights for Reddish, like when he drained seven three-pointers in a win against Army during the second game of the regular season. He also had a season-high 27 points in a loss to North Carolina, which was better known as the “Zion’s exploding shoe game,” and a last-second game-winner against Florida State about a month before that.

Through the highs, the lows, and the noise surrounding Cam Reddish, what can we truly expect from him moving forward?

Defense: Considered a flaw in his game coming out of high school, defense has become one of Reddish’s greatest strengths.

While critics may question his motor, they certainly can’t discount his effectiveness on the defensive side of the court. Standing 6’8″ and blessed with a 7-foot-1 wingspan, Reddish has the length and physical tools to take on almost any position.

In a switch-heavy game like today’s NBA, the ability to guard a variety positions is a must. Reddish has taken tremendous strides as a defender, showcasing great foot speed on the perimeter, and the ability to seamlessly pick up new assignments when forced to switch on a pick.

Reddish can comfortably guard opposing 1s through 4s and has shown solid defensive instincts. He’s a menace when running the press, but he also has the awareness to disrupt passing lanes and generate turnovers in the halfcourt. He was top 10 in the ACC for steals per game.

Although his offense and scoring was spotty at times this past season, defense became an area that Reddish could be relied upon. In the couple of games he had to sit out, his impact on that end of the court became even more apparent.

Cam Reddish found his shot against Miami, shooting 50% from the field for 19 points, 7 rebounds, 4 assists and 1 steal.

Cam’s ability on defense continues to hold more appeal than his shot. Plays like this are what you want to see more of..pic.twitter.com/r7qfqZqtdV

Offensive Versatility: Reddish is far from one-dimensional when it comes to scoring and the other end of the court. He can score from almost anywhere on the floor, knocking down perimeter shots, attacking the basket, or showing off a smooth step-back jumper to create space in the midrange. Reddish is also a threat in transition.

This stepback from Cam Reddish 🔥

Leads Duke with 10 points early. 4-6 from the field, also has 2 rebounds, 2 assists. Strong start for him. pic.twitter.com/jwL3aqBNpC

He’s shown the ability to hit those tough shots that have become commonplace in the NBA, and he can get set and hit catch-and-shoot shots from beyond the arc. While he’s not an explosive, lightning-quick player, Cam’s certainly creative enough to throw off the defense and free himself up for a shot. He has a solid handle and is capable of making those types of moves or going downhill and attacking the basket.

Aside from his scoring ability, Reddish can also facilitate and run the floor. It was an area of his game that wasn’t really explored or showcased at Duke—until he had more opportunities to do so in the final month-and-a-half of the season—but Reddish can be a playmaker. He can play anywhere from 1-3, which he did frequently in in high school and AAU. In his final years at Westtown, he could run the point and set up his teammates.

He doesn’t have elite court vision, but he thrives in driving-and-kicking and can find the open man. It’s possible that a team re-explores this facet of his game in the NBA—an area that wasn’t really needed with the likes of Tre Jones and R.J. Barrett around. It made him an intriguing prospect coming out of high school.

Inconsistency/Shot Selection: While Reddish has shown the ability to take and make tough shots, or make those nice plays, he hasn’t been able to do it at a rate that makes him anywhere near automatic or truly reliable. Playing alongside Barrett and Williamson, who commanded the bulk of opposing team’s defensive attention, Reddish just wasn’t able to capitalize and convert at a high rate.

His shooting mechanics and shot release appear fine, and although he’s taken tremendous strides adding range to his shot since his high school days, his shooting percentages are underwhelming.

This past season, Reddish shot just 35.6% overall. Apart from that, he shot just 39.4% from inside the arc and despite taking the most three-point attempts for Duke, his 33.3% clip from downtown left much more to be desired. He’s best when he has time to set up and take catch-and-shoot opportunities, but even then it’s evident there is still plenty of work to do.

There are times where he is a volume scorer, forces up bad shots, or simply cannot convert. Reddish can make the nice plays, but his efficiency isn’t where it needs to be. While it’s just one season of college hoops, there’s warranted concern for what those shooting numbers will look like at an even higher level.

Unselfish to a Fault: Usually it’s good to see one of your star players be unselfish and a good teammate. It’s not easy going from being the alpha dog your senior year of high school to being a member of the pack in your first year of college.

While Reddish had his moments of stepping up to the forefront, he mainly played behind the likes of Williamson and Barrett. At times he deferred to them more than was necessary, prompting questions about his aggressiveness, motor, and ability to be the type of impact player you would hope to see out of a lottery pick.

He disappeared in the first game against eventual National Champion, Virginia, on Jan. 19, a game the Blue Devils won by two. In the regular season series against UNC, he shot a combined 16-for-46 (34.7%), a subpar mark despite scoring over 20 points per game in both meetings. However, he barely made his mark in the ACC Tournament Semifinal against the Tar Heels, scoring only six points in a 74-73 victory. He had similar underwhelming performances in the ACC championship game against Florida State and the NCAA Tournament Elite Eight loss to Michigan State.

Some NBA fans have come to Reddish’s defense, claiming that he needs to be “the guy” and that the NBA will be a better fit for him than college. What’s going to happen when the overall talent level of his team and competition is better?

This isn’t the first time Reddish had to take a step back; he played in starting lineups loaded with Division I talent in high school. Despite already getting big-time scholarship offers, Reddish was deferring to the likes of Mo Bamba (Orlando Magic, Texas) and Brandon Randolph (Arizona), and it wasn’t until those guys went on to college that he was able to fully display his abilities.

At Duke, he had to go back to fitting within the system (that of Hall of Famer Coach K, nonetheless) and adapt to not being the alpha dog. That was shown to be a mixed bag for him—so what will happen in the NBA?

Reddish is an enigma of sorts. At times he has shown up in big moments, while other times he’s been lost in the picture.

Despite his struggles, Reddish still has great upside as a playmaking, versatile wing with great size and length. The NBA can always use players who can step up and help out defensively, and the issues with consistency on offense are fixable.

New York has the third pick in this year’s draft, and while most of the conversation leading up to May was centered on Zion Williamson, Ja Morant, and R.J. Barrett, reports indicate the Knicks’ front office adores Reddish.

We won’t know where the Knicks draft until Tuesday night, so it’s way too early to talk about who they may take on June 20. But some of their talent evaluators are fans of Duke’s Cam Reddish, per sources. More here: https://t.co/UyAQsFU6bj

There’s no doubt that Reddish will be a first-round pick, somewhere in the lottery. Picks 4-12 can go down in a variety of ways—could the Knicks start the fireworks early and snag Reddish at three?

We won’t know for sure until Draft Day, but the Knicks’ front office will certainly have us on our toes.

»READ: Gonazaga’s Rui Hachimura could be a nice draft-day trade return for the Knicks